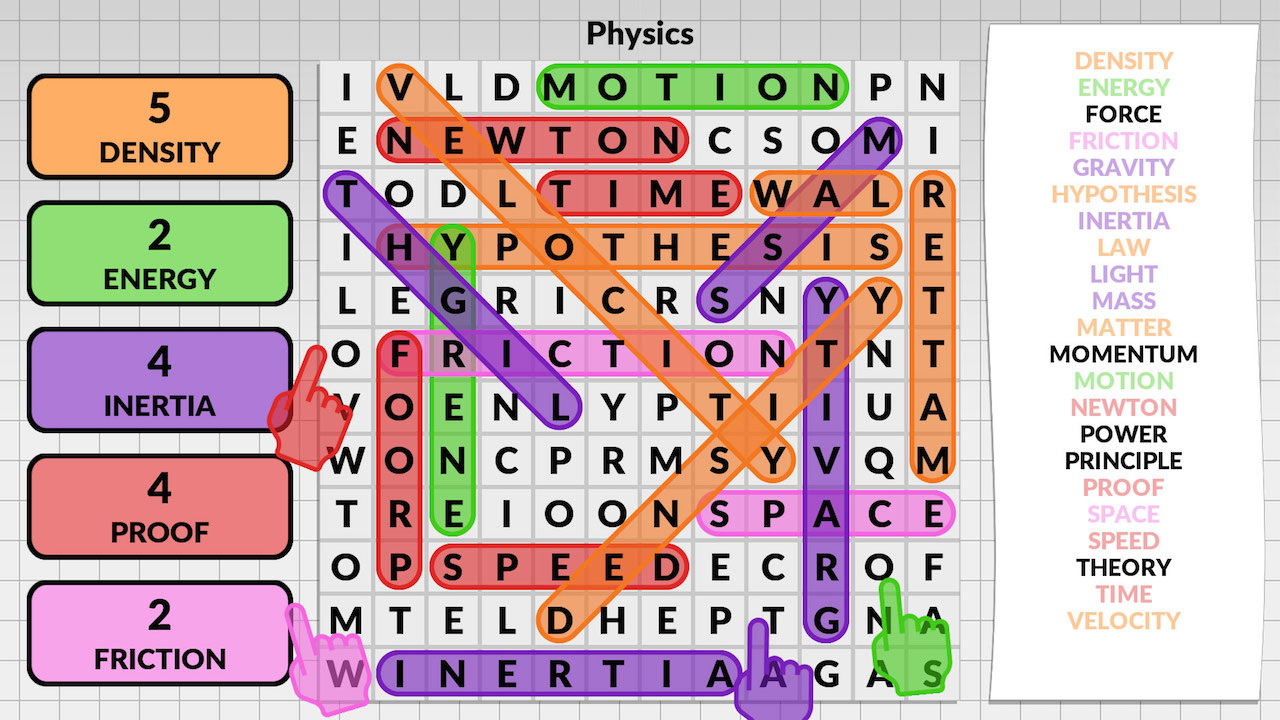 Some days, like when it’s raining outside or if you’re chilling in the evening after a particularly hard day, it’s nice to relax with a casual game that can be played at your own pace, or one that brings the family together in an entertaining and educational way. In my experience, there are no better games out there that cater for this need than the ones created by Lightwood Games; especially their series of Word Search by POWGI titles that are currently available on all of the major gaming platforms.

Whatever console you play on, you’ll find the same experience here throughout, with a mechanic that successfully reproduces the classic formula of finding a set of given words within a jumbled up grid of random letters. From a subject-specific list, it is your task to search for these hidden words within the myriad of letters, highlighting them on a series of axes, until all the appropriate words have been found. It’s an age-old concept, as well as a family favourite, that holds an everlasting appeal for young and old alike.

There are literally hundreds of puzzles available to you here, each one set within a series of categories such as Pizza Toppings, Dinosaurs and Look to the Stars, which lists astronomical words of things found within our solar system. It’s a nice mix of subjects that holds a wide-range of appeal to all. There’s also a nice eclectic mix of varying word lengths to find too, producing some simple solutions that are ideal for children, to more adventurous varieties that can take up a whole line within the grid of letters, or run backwards and even diagonally, creating an element of puzzles that are never too difficult to complete, yet provide a nice balance in their challenge. 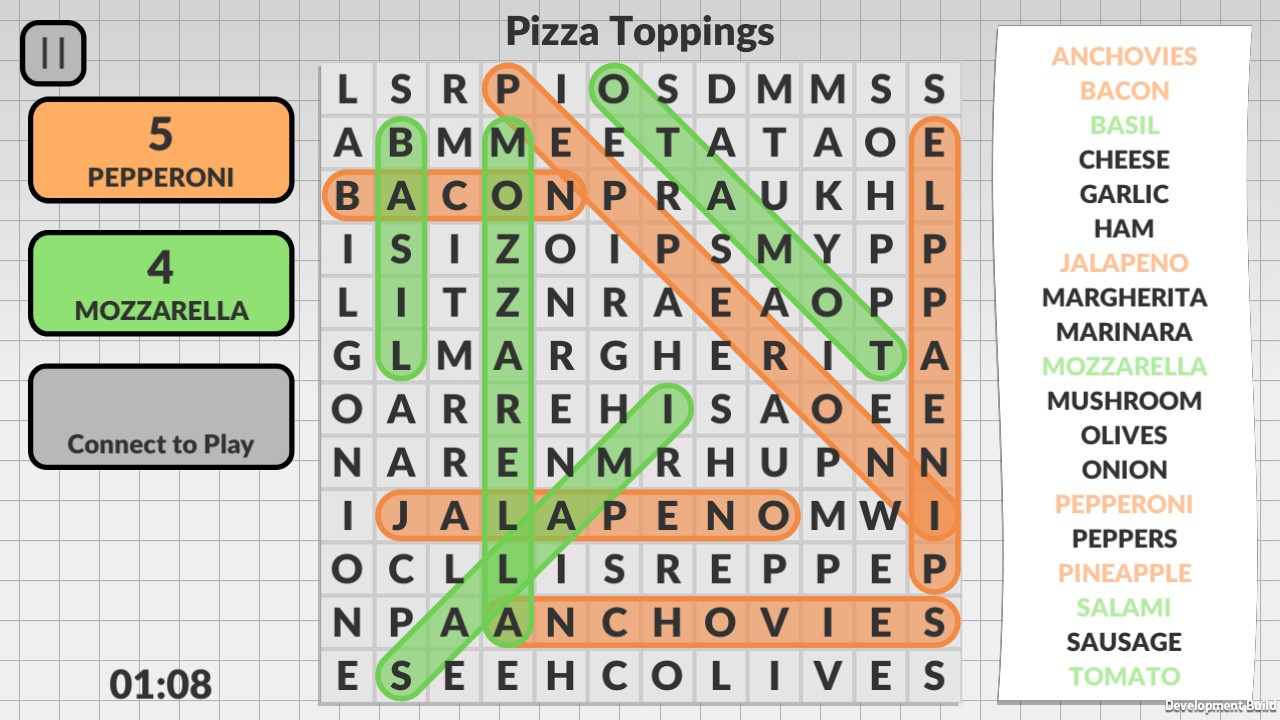 The mechanics of the game works on a simple premise, with the first or last letter of a word being selected with a cursor and, by pressing the A button, dragging a line through the word until it is all selected; thus crossing it off the list of selected words to find. It’s an easy concept that promotes a pick-up-and-play style of game that is also easily accessible. The game also incorporates a few other elements not usually associated with word searches. The first of these come in the form of a timer that records the total time taken in the completion of each puzzle. It’s a nice little feature that promotes a replay value as you go back and try to beat personal bests.

The other element comes in the form of a multiplayer aspect, where you and up to four friends, or family, can play together locally. It works in a competitive style with each person searching for words and the player with the highest total of words found wins. This brings a nice style of competition to the gameplay, as well as a good element of fun to young players and old alike. It’s a nice inclusion that varies the style of play, yet maintains the same relaxing, casual experience in its basic premise.

I’m a big advocate for cross-buy games on the Playstation and Word Search by POWGI is one of those titles that awards you with two games for the price of one; especially if you own a Vita too. Both games run independently from each other with no cross-save functions, but both offer the same game in content and playability. However, with the ability to utilise the Vita’s touchscreen, this is a title that feels more at home on Sony’s handheld; producing a connection that mimics using a pen, or pencil, in the traditional method of solving these types of puzzles. 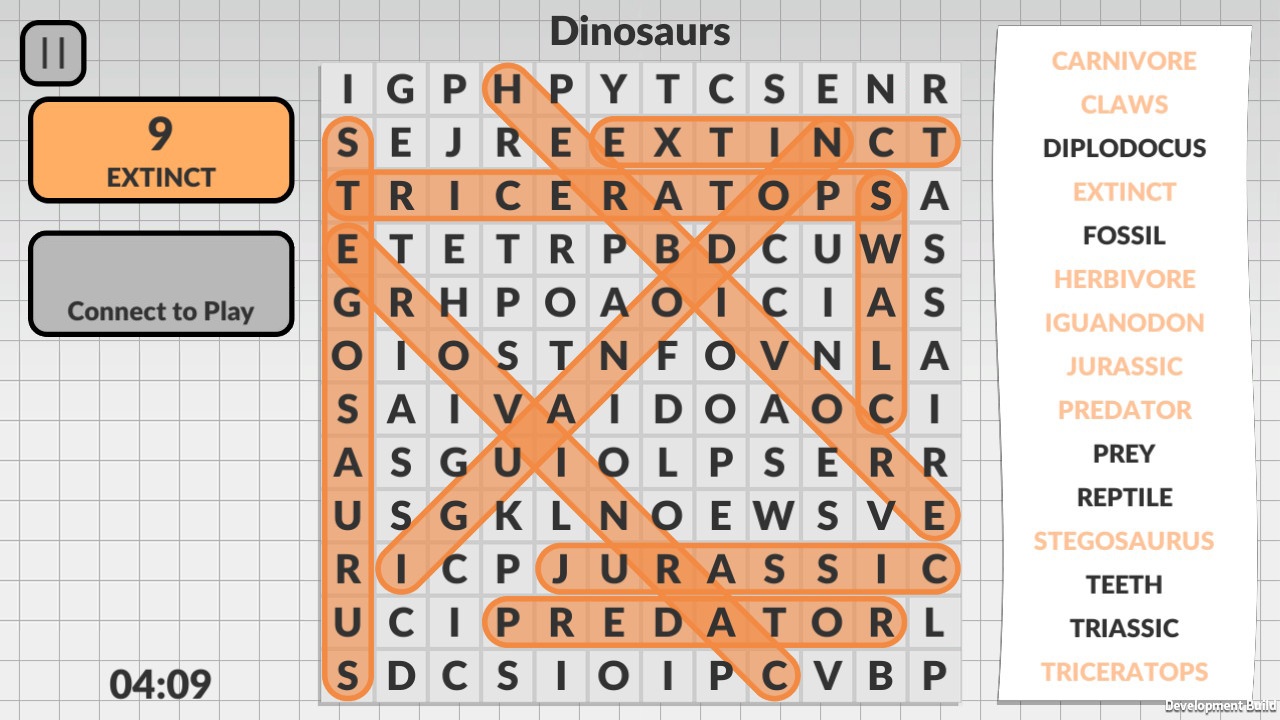 However, for me, the genius of this game comes in the form of its trophy support. I have to admit that this is a title that I have played extensively on Nintendo’s Wii U and Switch consoles respectively; but for me, these Playstation iterations present the best versions of the game to date. This is largely due to the developer’s ingenious trophy allocation, forcing a replay value as well as dangling a carrot for trophy hunters to work their way through everything that this game has to offer. It’s a very enticing prospect that forces you to keep playing, producing a more rewarding experience for the player. Nintendo, I hope you’re listening as the lack of any trophy/achievement support is a missed opportunity and also inadvertently damaging to independent developers in this respect.

Everything here is presented in a basic, but easily navigated and child-friendly manner. There’s no myriad of menus to trawl through, or confusing aspects in trying to find a suitable puzzle. It’s all presented to you on a plate and instantly accessible. Each of the word-searching grids are clear and concise, also containing an attractive element of colour; especially in its multiplayer capacity. A looped soundtrack plays a jolly tone throughout, although it tires quite quickly and can become a distraction, but you can choose to mute this should you wish to do so.

Overall, Word Search by POWGI presents a nice, casual puzzler that contains a huge amount of appeal to any age of gamer. It’s a simple, yet tried and tested premise, offering a different take on the traditional style often associated with its genre. It offers a nice balance of challenge and difficulty, as well as a form of entertainment and educational values that sits nicely within a family environment. With its cross-buy functions and ingenious trophy supports, it boasts a huge amount of playability and value for money; offering not just days or weeks of gameplay, but months and even years. Of all the versions of this title I have played, I can safely say that Sony players are getting the best version of the title to date, particularly if you own a Vita, as this is a title that is simply a must-own on the popular handheld. If you’re a fan of word searches, or even casual puzzle games, then this is a game that will satisfy immensely, both in solo play or with friends and family.