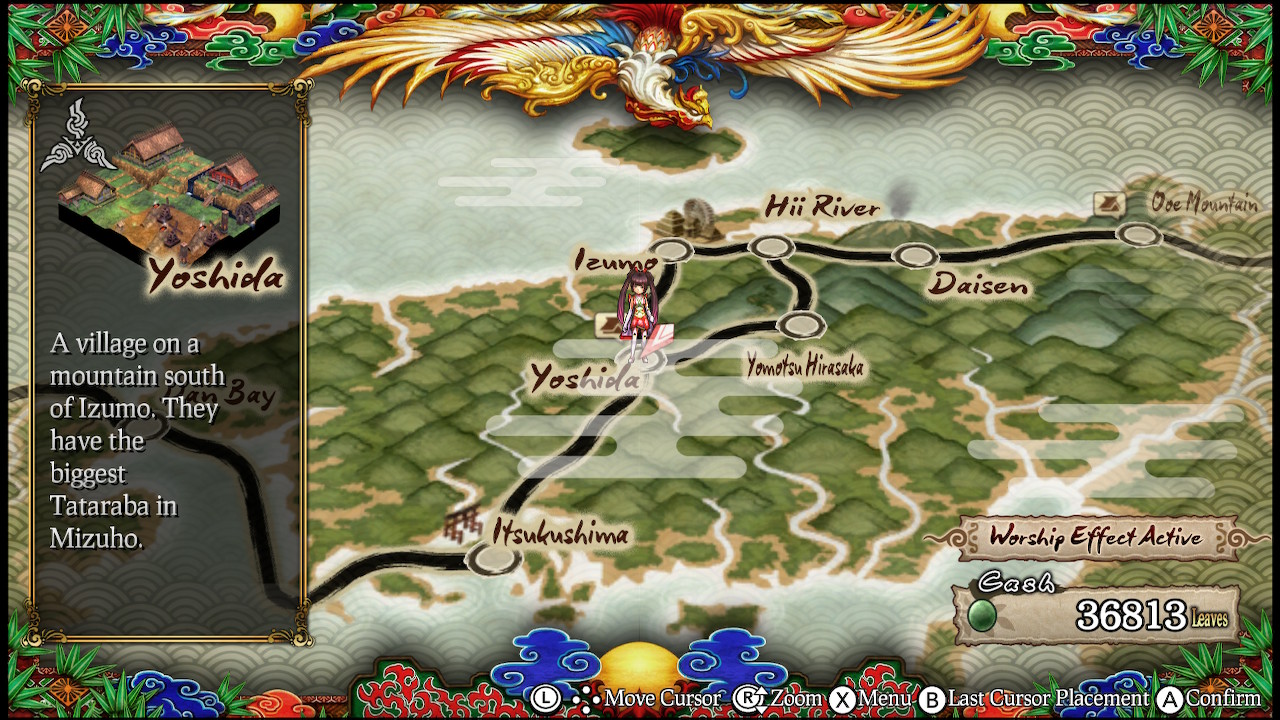 In all of my years and experience in playing Japanese Role-playing games, I can assume that its safe to say that this is a genre that can be likened to Marmite; you either love it or you hate it. This doesn’t necessarily apply to the genre as a whole though, as some JRPG’s I have fallen head-over-heels in love with, such as the Final Fantasy or Ys series of games; whilst others have failed to captivate or invest me into their worlds, with Xenoblade Chronicles II probably being the biggest of those titles. No matter what your taste or view to these style of games, they still continue to fascinate and attract the attention of gamers, as does God Wars: The Complete Legend as it shines its heavenly light upon the Nintendo Switch.

Developed by Kadokawa Games and published by NIS America, this tactical role-player explores the folklore behind the untold history of Japan. Told through the eyes of three warring factions, the stories within God Wars touch on the origins of Japan, as well as provide a strategic and tactical element with its turn-based combat. With the land of Mizuho divided into three nations, Fuji, Izumo and Hyuga, the people offered sacrifices to the ancestral spirits in order to retain a peace throughout the land. However, after a period of natural disasters, such as flooding, volcanic eruptions and earthquakes, the ruling Queen, Tsukuyomi, sacrificed her daughter, Kaguya; who after standing at the precipice  to the bubbling lava of Mount Fuji, promptly disappeared.

It is now thirteen years since that fateful day and Kaguya, along with her childhood friend, Kintaro, set off on a journey that takes them across the districts of Mizuho in a quest to discover the truth behind her mother’s decision to sacrifice her beloved daughter. The story is told through a series of cut-scenes, all of which is fully vocally narrated in English, although you can also change it to Japanese if you so wish. Its narrative is also matched with its visuals, taking its inspirations from traditional ink paintings and wood carvings; adding to the mythology and folklore of its traditional story-telling. 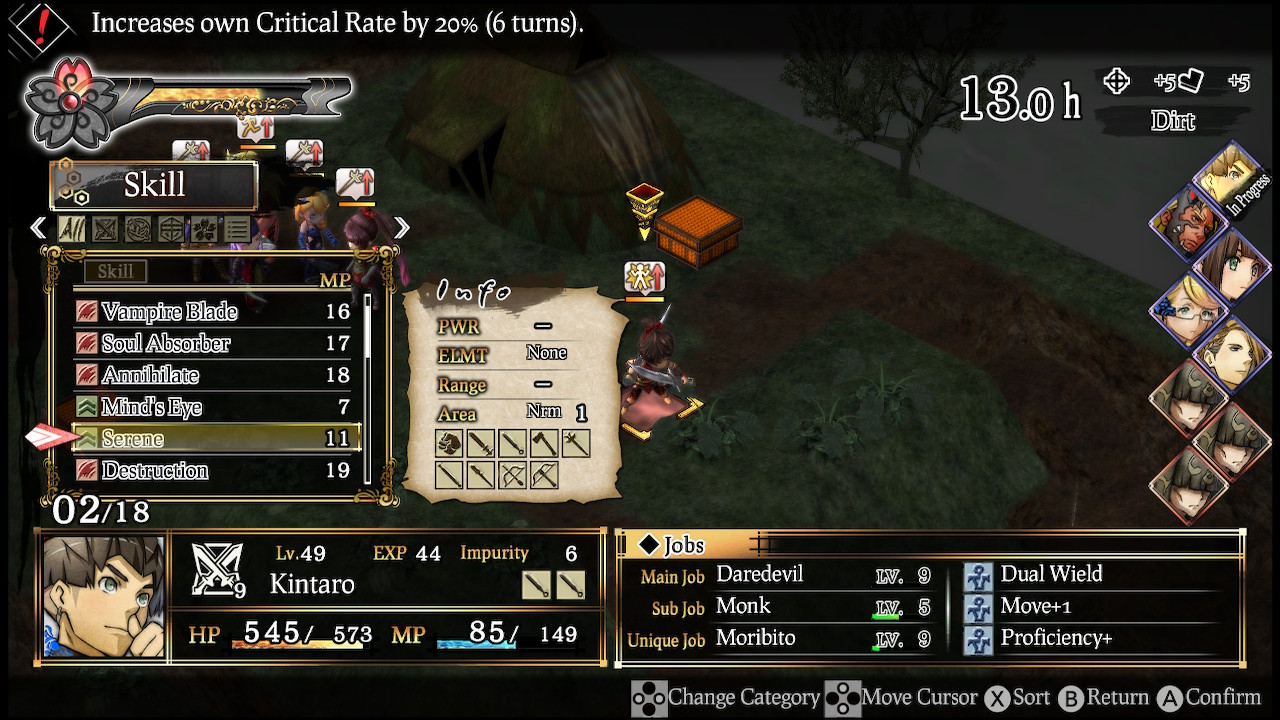 Presented with a world map that covers the land of Mizuho, you guide your party along a path, through a variety of locations that offer differing functions. These can range from stores in which to replenish supplies, buy armour and weaponry, as well as sell on any unwanted goods to shrines in which you can offer worship to attain stat boosts or embark on a series of side-quests in order to level up your party. As well as these, various locations offer story progressions, through cut-scenes and combat, as well as some semi-random elements that pop up along your path, forcing into a variety of skirmishes.

It’s here where the main gameplay functions of God Wars come into play. Set over a series of isometric blocks, much like the landscapes that you would find in Final Fantasy Tactics, but in a more refined presentation, you manoeuvre your party around a grid as you battle a variety of enemy types, open chests and search for herbs. With fourteen playable characters and over thirty classes, each with over four hundred skills and more than two-hundred and fifty pieces of equipment, there’s more than enough content here to keep the most battle-hardened of players busy for a long time.

These elements combine to give the game a huge level of depth, although the battles themselves are a pretty much standard affair. However, this in no way detracts from the gameplay, as this maintains a very old-school feel that simply charms with its reminiscing values. Saying that though, there are a variety of elements that come into play in the tactical strategy of each fight. As well as a host of options for each characters, such as attack variations, magical powers, movement restrictions and defence options, the landscape and positioning of characters also plays a pivotal role. 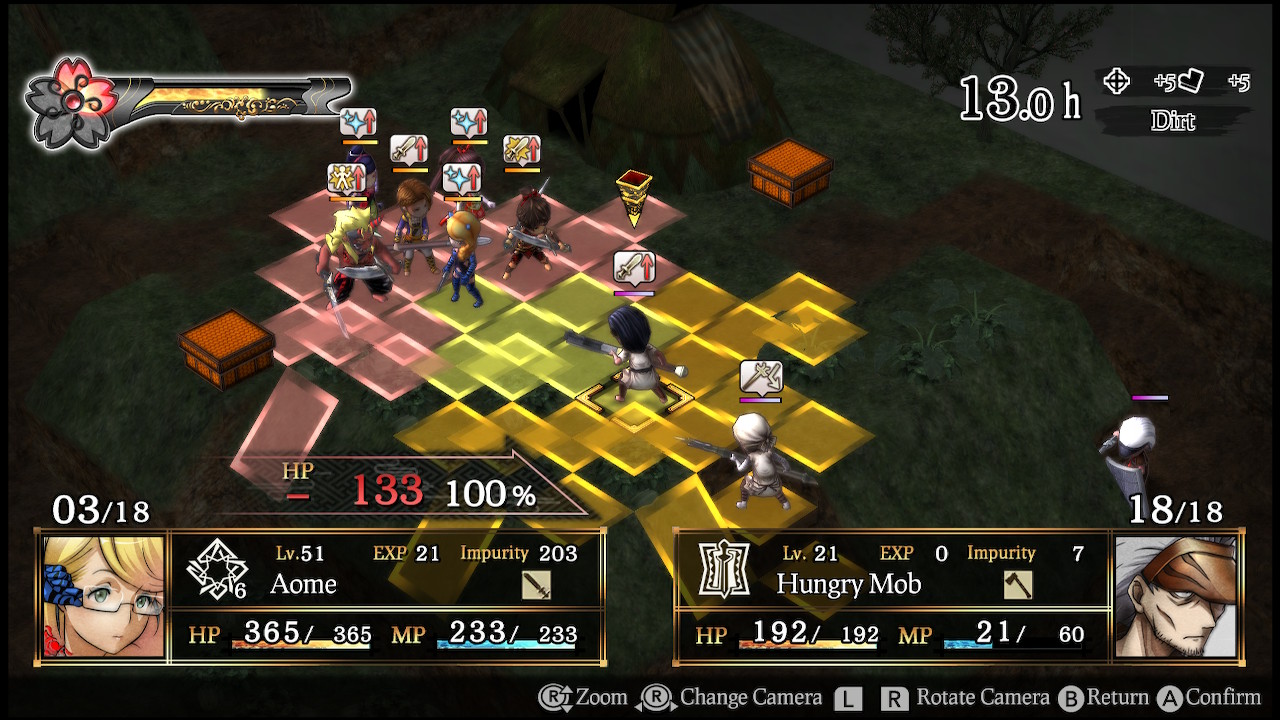 With a multi-levelled surface, your stance on higher or lower ground affect the damage output of your attacks; with the higher ground offering a stat boost and lower ground giving you a distinct disadvantage. Angle of attacks can also affect damage output, with rear or side attacks dishing out more damage than a full-frontal assault; but the same also applies when in defence, meaning you need keep an eye of defensive manoeuvres as well as your attacking options. It adds a good level of strategy to each bout, particularly as you progress through the game into the higher echelons of levelling and unlock higher skill bases that require a more lateral thinking in how you approach each fight.

The tactical level of the AI is also suitably impressive here, with enemy units working together to force you into situations, or re-think your approach on your strategic situation. Again, it forces to remain alert and on your toes as you join forces to repel any enemy incursions. Each party, both yours and enemy varieties, have the options for ability buffs; another area where the AI performs well, often resulting in picking out certain targets that need to be dealt with before finishing off the standard units that no longer have the aid of a mage or stat-boosting partner. There’s a huge amount of levelling up statistics within the game too, especially within the variety of roles that each character can play. These ‘jobs’ can be set in a primary and secondary role, meaning that each character can combine a number of elements that produce a magic wielding swordsman, or a healer that can defend themselves with powerful attacks.

Everything here has been intricately designed, from gameplay elements and mechanics to the visual presentations of its anime-style cut-scenes and battlegrounds; although the audio qualities can be a bit questionable at times. It retains a very old-school feel to the way it plays, but intersperses it with moments of modernity to produce a game that never feels outdated, yet charms with its reminiscent values. This Complete Legend edition of the game also comes bundled with a wealth of DLC, from the Legend of Yomi to the complete story of Future Past and a variety of new characters and customisations; presenting the most definitive experience of God Wars that you can possibly get. With all of its extra content and level of depth, this is a game that easily boasts over one-hundred hours of playtime; especially with its tales of folklore that draw you in and satisfying combat elements that produce an enthralling and rewarding experience. It may contain a few rough edges here and there, especially in its audio qualities, but this doesn’t detract from what is essentially, a god-given game from heaven.

The definitive God Wars package, offering a legendary experience with its huge amount of depth and all previously released DLC.