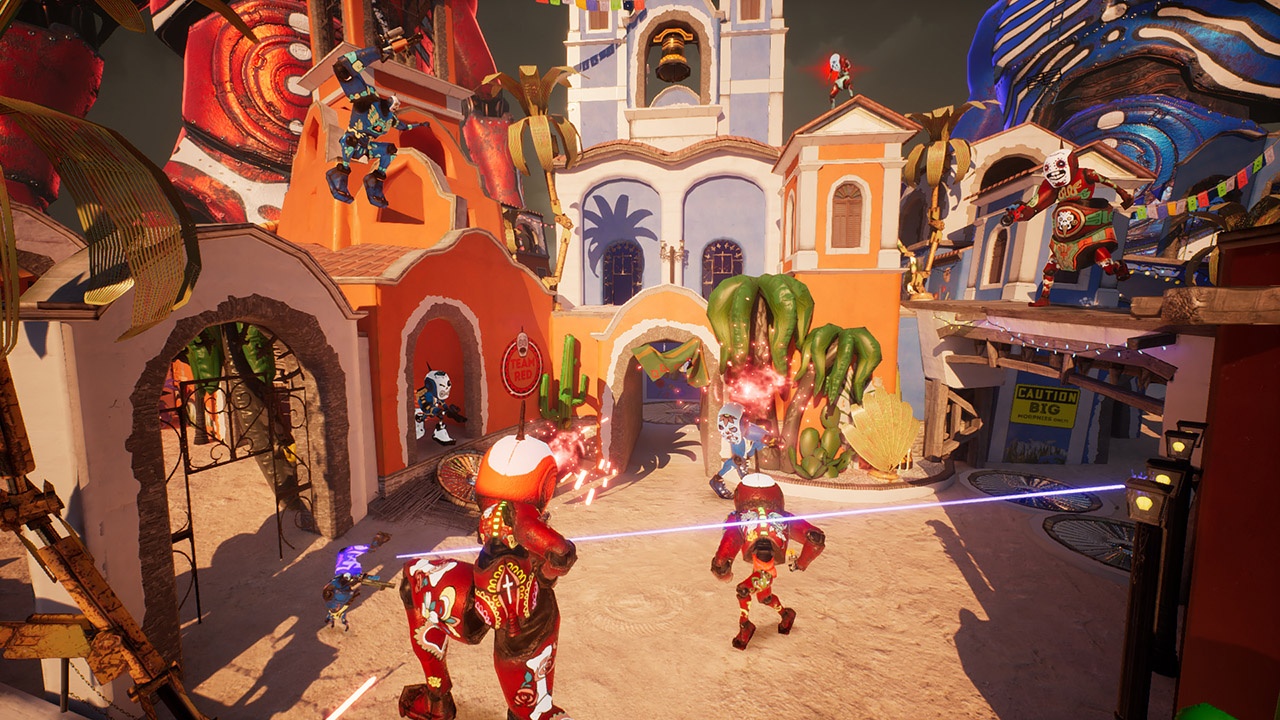 Do you know that feeling of buying a bag of Cheese and Onion crisps, or any other flavour for that matter, and you open them to find that they’ve got no seasoning whatsoever; leaving you with a bag of essentially plain crisps. It’s a disappointment, isn’t it? Gearing yourself up to something you’ve been looking forward to, only to be let down at the last-minute. It’s a premise that can also be applied to video gaming, especially with some of the hype-inducing advertising that some of the corporate companies ram down our throats. The next big thing is on the horizon, promising a wealth of new features and exciting gameplay, only for the final product to contain nothing of what was dangled to us in the form a very expensive carrot. Unfortunately, for me anyway, this was the overriding feeling that I experienced when I excitedly began to play Morphies Law, out now for the Nintendo Switch.

Developed and published by Cosmoscope, this team-based shooter contains an interesting and unique premise in its morphing mechanics. Shooting another player not only depletes their health, but shrinks the body parts which are being hit; thus increasing the size of yours. For instance, perform a series of headshots and the opposition’s head will shrink, making it harder to hit, but your head will increase in size, making you an easy target. The same applies for all body parts, from chests to arms and heads to legs. Whatever limb is shrunken or grown, it also creates an impact on the manoeuvrability on characters too. The larger your body mass, the slower you become, but at the same time, the higher you can jump. The opposite is true for the smaller you become; although you can run significantly faster and your size makes you harder to hit.

This mechanic creates a form of balance, allowing larger players to jump to higher levels, but also preventing them from entering areas that the smaller varieties can run into. However, this isn’t the only mechanic that is at play here, as different game modes and unlockable extras can affect the way in which you play. As it currently stands, there are three types of match on offer: Morph Match, Head Hunt and Mass Heist. Each of these modes can be played in a number of ways; either solo with AI bots, as an online multiplayer with two teams of four, locally for up to eight people and co-operatively online against the AI. Each of these modes can be played across a variety of four different levels; The Maztec Temple, Morphie Salon, Tanker Town and Fan Antonio. 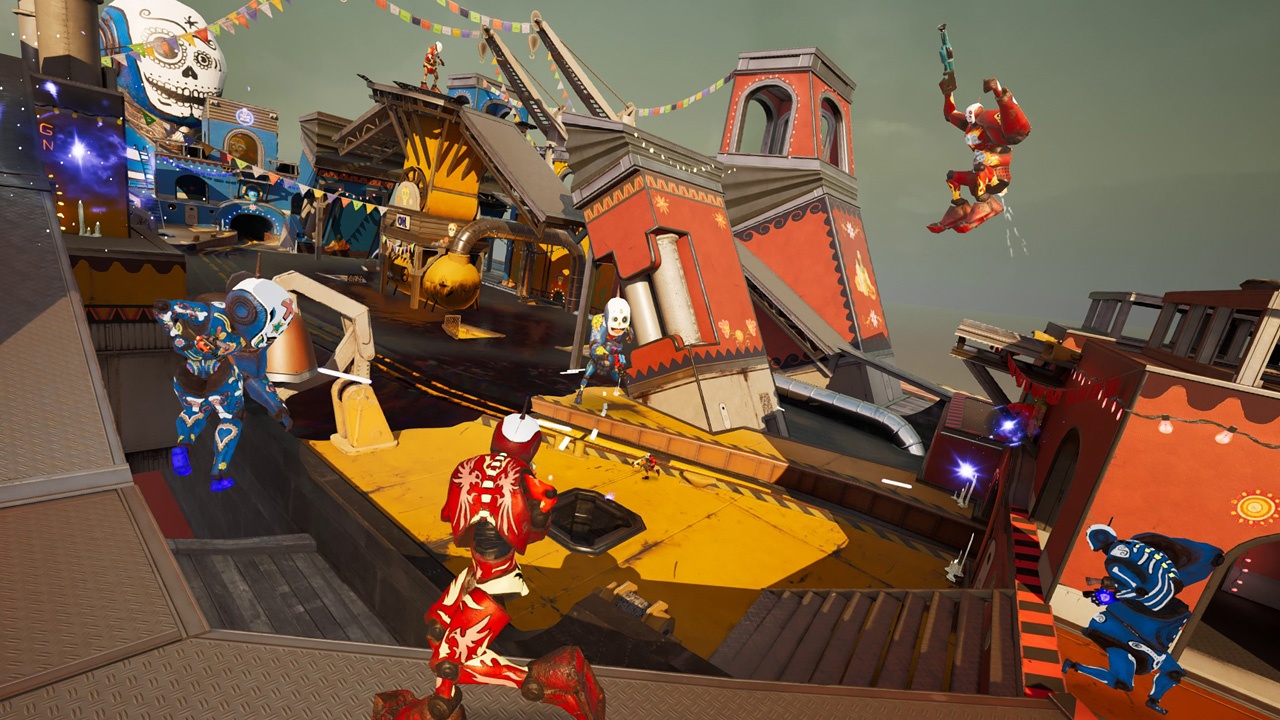 The game’s morphing mechanics play differently throughout each game mode; offering advantages and disadvantages based on your bodily mass.  The first, Morph Match, plays in a simple deathmatch formula, morphing body parts in a mechanic of the biggest team wins. Secondly comes Head Hunt which plays as a form of Capture-the-Flag. You fight to gain control of a head that lies in the middle of the map; retrieve the head and bring it back to your base and your team wins. However, if you’re too small, picking up the head eventually weighs you down, crushing you to death. The third mode is Mass Heist, which tasks you with standing on opposing shield switches, shoot at a giant avatar’s body parts, thus expanding yours and transferring its energy at randomly placed altars that transfers your gained mass to your own team’s avatar.

Another factor that can alter the state of play, especially in respect to your own character, is the ability to add specs and plugins that enhance certain features. These abilities become unlocked as you progress through the game with the acquisition of experience points. These add-ons produce certain effects such as a chest bolt-on that increases your health as it gains in size or grappling hands that allow to traverse walls or stun enemies. You can even combine specific weapon parts to create weapon variations from assault rifles to shotguns and secondary firing that can spray paint a la Splatoon-style, creating a mass that slows enemies and heals team mates. The final ability, ultimorph, is a special move that is utilised by filling a meter. Once full, you take control of the giant avatars that stand either side of the level and, through the cockpit of their field of vision, can choose to heal your team or attack the enemy with energy beams. It plays in a similar mechanic to Call of Duty’s care package awards; albeit one that is a lot less impactful in its execution.

There’s also a wealth of customisation, allowing to fully create facial and bodily builds, to give your character a personal touch; all of which can be bought with in-game currency awards or accrued from a pinata-style doll that can again, be bought, or is awarded each time you level up. It all adds to provide a touch of variety and depth to the gameplay. However, when it come to the core game, Morphies Law begins to show some glaring faults in its design; as well as a host of technical issues. 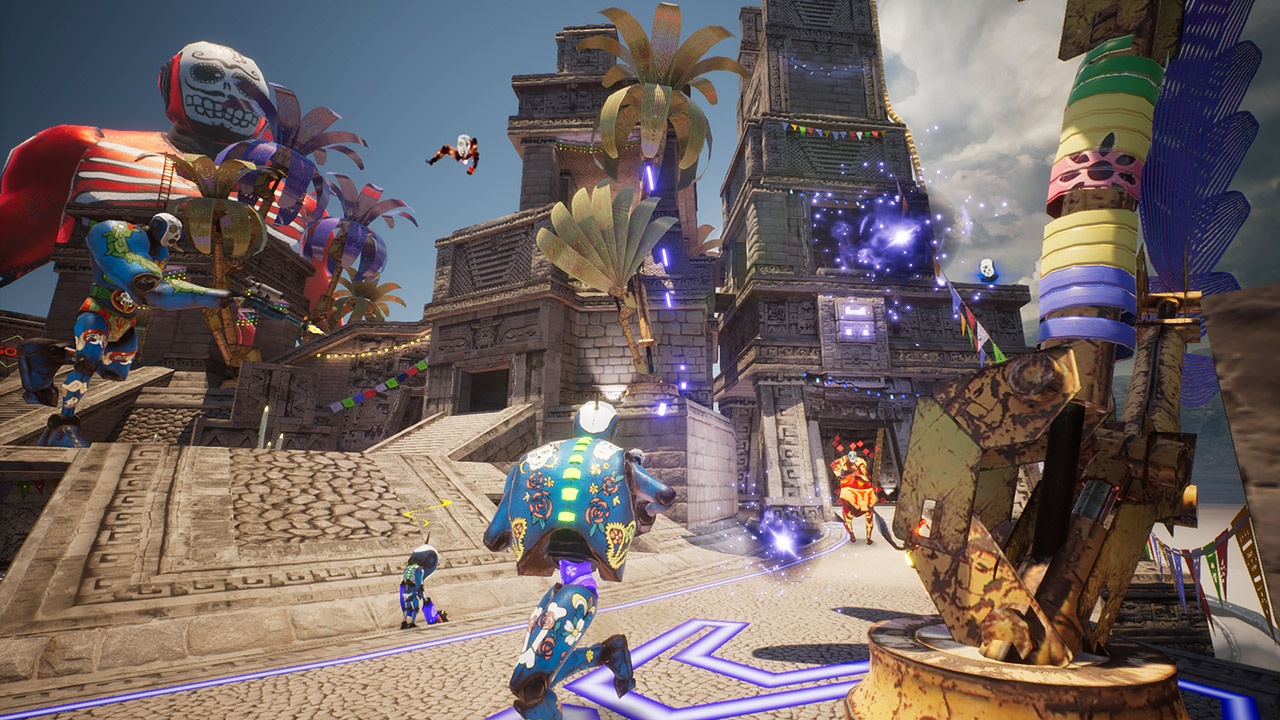 Although the level design of each stage offers a number of paths on varying plans, they feel distinctly claustrophobic. This does bring a sense of urgency to the gameplay, as the close-quarters skirmishes do require the best of your skill in order to dominate the battlefield. However, because of this design, it’s also all too easy to find yourself penned within your spawn area, as it is just as easy to pin the enemy units into theirs. This in turn, encourages a spawn-camping style of play that can easily frustrate; especially if you couple this with an uneveness in match-making, with a number of games producing one team of four players and the other only containing three, giving the opposition a distinct advantage.

It is possible to reach higher platforms within the levels, utilised with a jump mechanic that literally has you passing wind out of your backside, but this manoeuvre is very hit-and-miss in its accuracy; sending me on more than one occasion to become stuck within the scenery from which I couldn’t escape, or provide any sort of support to my team-mates, especially if we were already outnumbered four-to-three. Creating an online game can also takes some time, not through empty lobbies, but waiting for rooms to fill and level selections; often producing a waiting time that can last a few minutes rather than the immediacy that this title requires.

Despite a couple of shortfalls though, this is a fun, engaging and unique experience in the genre of team-based shoot-em-ups. It has some really good ideas, but their mechanics and execution just feels a little weak when compared to the big guns out there such as Epic’s Fortnite or Nintendo’s Splatoon. With a little bit of TLC and refinement, this has the potential to become a must-own title, but as it currently stands, it all feels just a bit average and should I want a fix of team-game shooting, then Morphies Law wouldn’t be the first title that I’d load up on the Switch. At the end of the day, it’s a good game, but ultimately, it could be a lot better.

A fun and unique team-based shooter, but too many frustrations prevent this from morphing into a great game.