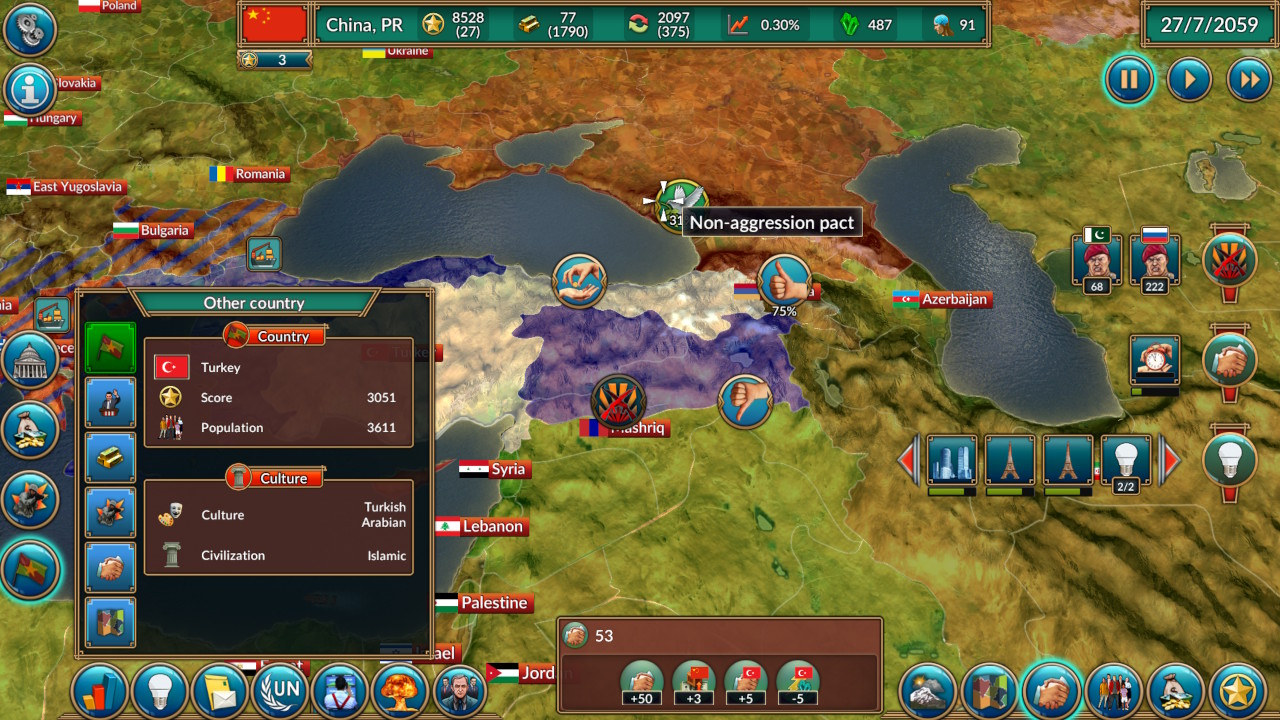 Within the modern world, there’s very little escape from the politics that govern our countries. Whatever the people in power say, goes. From levying taxes, worldwide relations and even war, it’s these decision makers that shape our lives, as well as our futures. Well, now you can be that person, as you take control of a country and, through domestic and worldwide affairs, make your political mark that will shape the outcome of a new world in the political management sim, Realpolitiks, out now for the Nintendo Switch.

Developed by Jujubee, with publishing through Forever Entertainment, this strategy game of domination within the modern world, puts you in the hot seat of your chosen nation and it’s your task to build its fortunes into one the world’s leading global powers. Freedom of choice is key here, with options to govern your country through economic growth, diplomacy, democracy or rule with an iron fist through authority and totalitarianism. There’s a wealth of options here, in fact for some, there may be too many options, as what Jujubee have done, is to try and bring ‘true’ strategy in a grand scale to the adaptability of a home and mobile device.

The first thing that hits you with this title, is the wealth of information and depth of options available to you. It can be mind-boggling to the uninitiated and even though a full tutorial is playable for you, it’s concepts, elements and mechanics can still be a strain on the brain. You really do need to take note of the menus and their various functions to succeed and, in my experience, this is a game that needs major investment as you play through it, learning from trial-and-error and working out all of the mechanics for the game to work. The reason for this, is this is a game that is largely made up of events and menus. 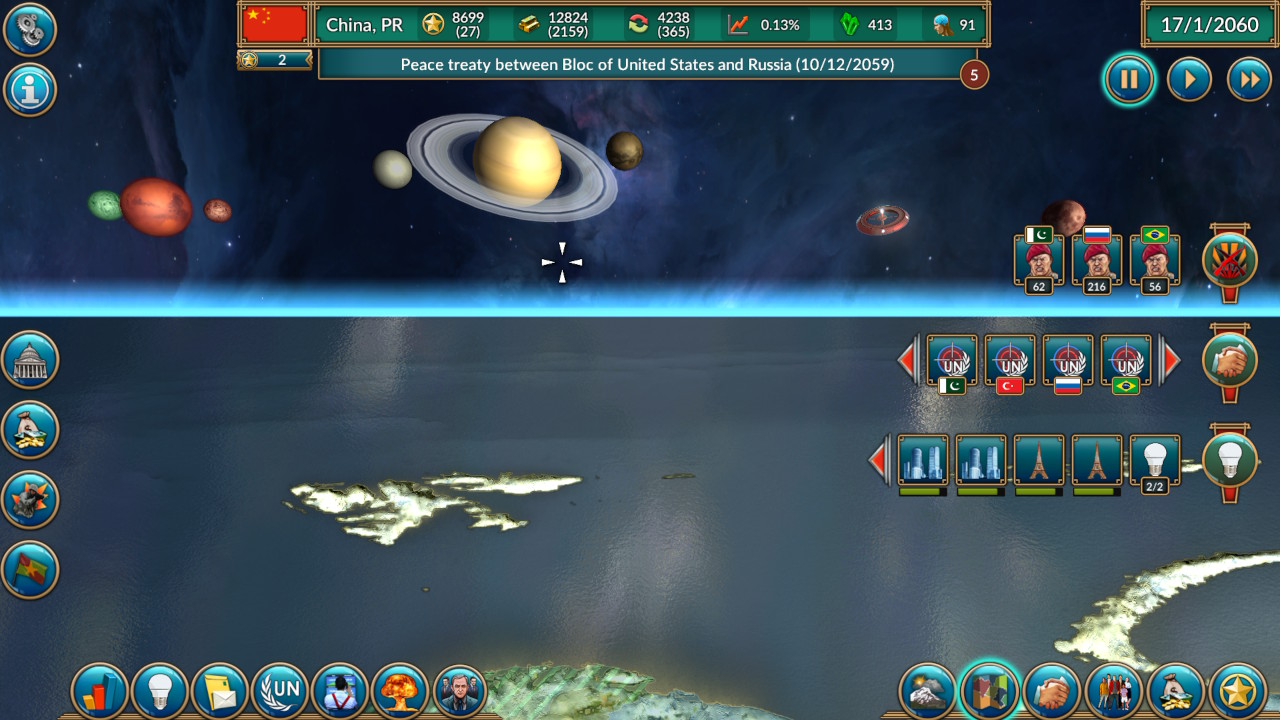 There are three setting in which to play: The World is not Enough, The Dawn of Tomorrow and New World Order; each one containing a number of sub-options which provide a variety of scenarios within their settings. The first of these, The World is not Enough, forms the main bulk of the game, with its sandbox style tasking you with controlling a nation and expanding its politics and influence however you see fit. The other modes offer a more streamlined experience. The Dawn of Tomorrow follows the events of the a nuclear war, requiring you to rebuild a nation following the aftermath of world destruction and New World Order contains a setting of every nation within the world starting the game on an even-footing and, within the constraints of time, the fastest developing country wins the race for world domination.

It almost has a Risk feel to it, especially in the mechanics of what is needed to achieve victory. Even though you do have the option for military intervention and spy networks, this title contains a very different style to the board game we all might be more familiar with. Your responsibility lies mainly in the decisions making aspect of political life, being responsible for internal affairs, foreign relations and the infrastructure of your chosen country. However, there is a limit to the number of assignments that you can undertake, which can be a disadvantage in given situations should you need to make a decision on the fly; although you can speed up the process of already-implemented tasks, but this also reduces the time in which you have to become a world superpower.

The developers have tried to incorporate every element of the political world here, even down to voting for sanctions or seeking permission for military intervention. It feels massive in its depth and quality, although I couldn’t help but feel that some mechanics were a little weak in their execution and the results in which they fruit added nothing to the events of the world or changes within your domestic plan. In fact, although the game looks ominous in its presentation, the further you dig deep into its mechanics, the shallower it becomes. 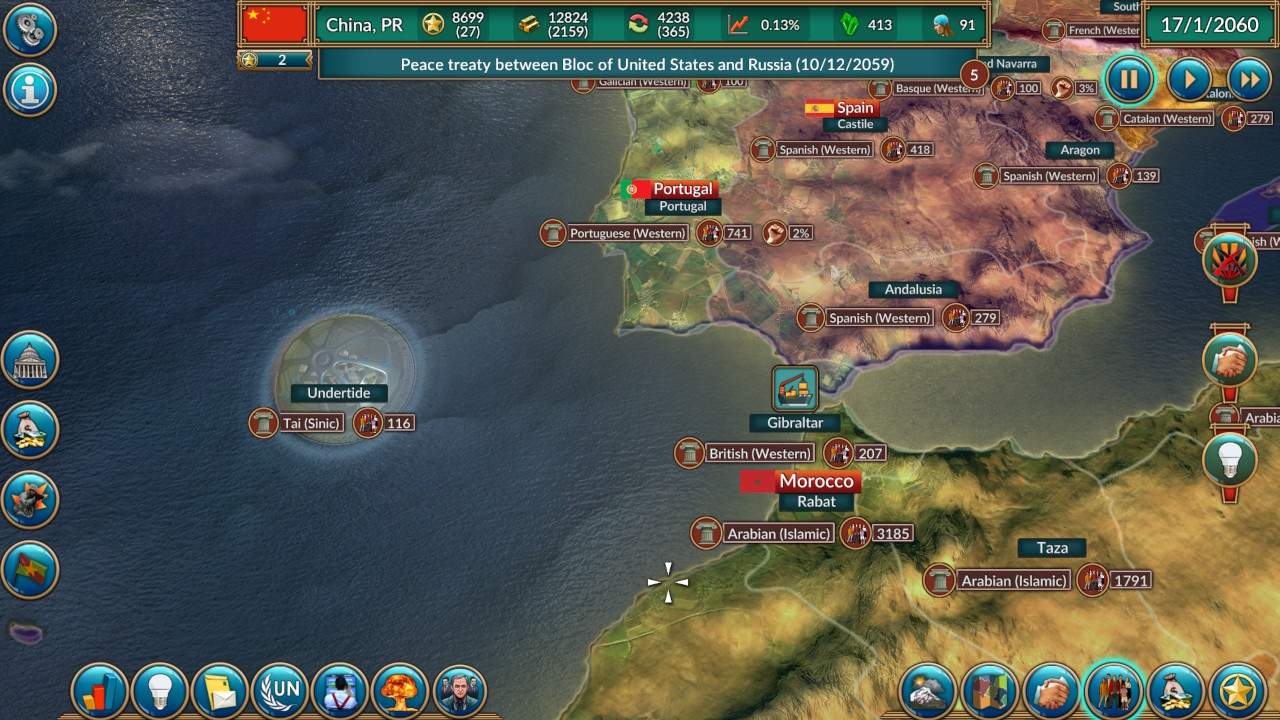 To say that this is an instantly accessible game, or easy-to-play, would be an understatement. Even after extensive exploration of its menus and mechanics, I still struggle to maintain any order within the world stage. You really do need to invest yourself into this title in order to get the most out of it. However, due to the nature of its statistical information and decision-making in world relations and affairs, this is simply a title that may deter many people with the complexities of its structure. Saying that though, if you’re looking for a deeply involving game that requires skilful thinking, or even have an interest in the political landscape, then this is a title that creates a satisfying environment in which to indulge yourself.

The game also come bundled with the New Power DLC to further add to the wealth of game modes and options available to you. This extra content features more diverse scenarios from nuclear threats, political influences and organisations to the ability to create larger territorial units. Despite its subject mater though, it’s not all deadly serious within the world of politics. Loading screens contain some hilarious satire, depicting Donald Trump as a hotel Lobby Boy, or Kim Jong-Un playing the game on PC as he laughs at his nuclear domination. You can even add a touch of personalisation, creating your own country to rule, both in name and representing flag.

There’s a lot to like with Realpolitiks, but only if you can manage to get to grips with the mechanics of how it plays. Spend a bit of time with it and it will reward you immensely with its depth of content and never-ending playability. However, as with many political institutions, this is a coin with two sides. This is a game that tries hard to sit comfortably upon the Nintendo Switch. However, when docked, the navigation of menus and selections is slow and cumbersome at the best of times with a conventional control scheme; something which is part-and-parcel of PC ports with its transition from mouse and keyboard to controller. Play the game in handheld and the touch-screen implementation makes navigation a little easier, but the smaller screen can be fidgety for larger fingers, or too small to comfortably make out the wealth of information with its reduced font size. Despite its problems of control schemes or portability, this is still a deep and engrossing title in which you can lose yourself for hours at a time, just be prepared to put a bit of time and effort into it as you figure out its mechanics. Do that, and this is a game that has the potential to be a world superpower.

A stat-heavy strategy sim that requires time and patience in order to get the most out of it.