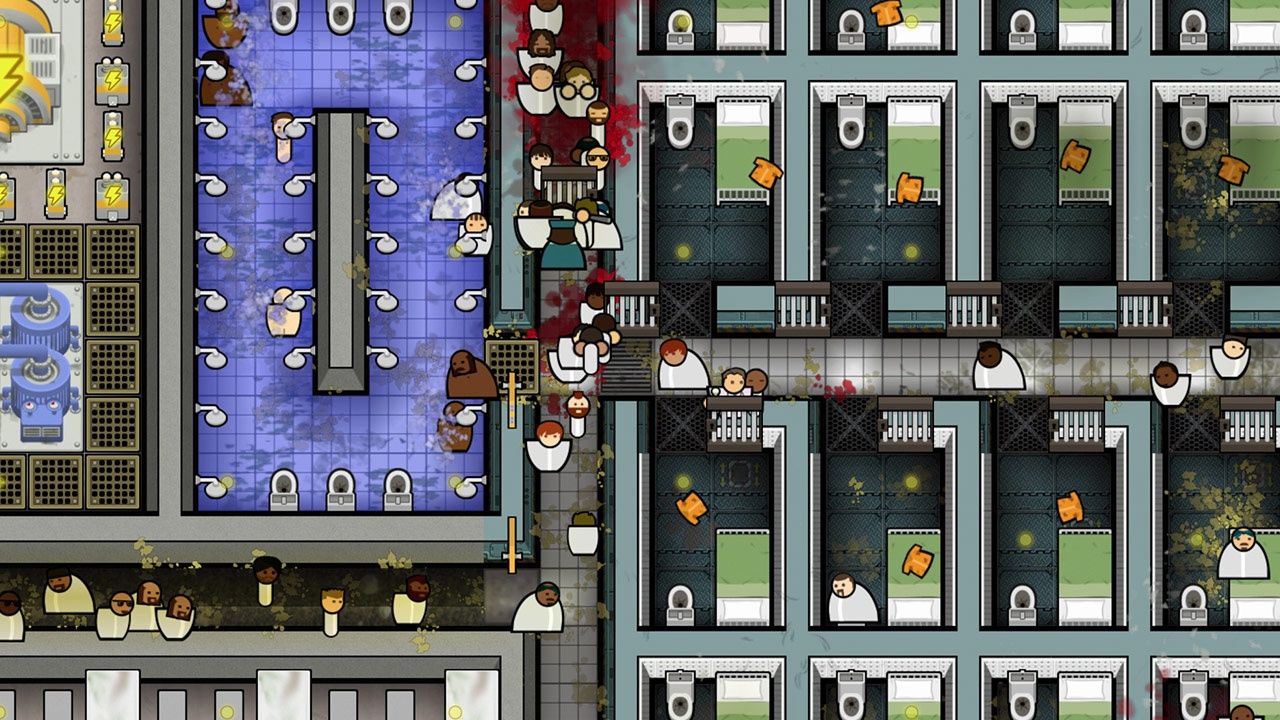 One of the things I enjoy most about video gaming, is its ability to present us with countless scenarios that we may never, normally face or get a chance to witness at first-hand. Whether it is being rocketed into space, posing as a badass within the midst of war, soaring as a top-gun pilot or even fanning the flames of a firefighter, you can’t deny the interactivity of virtual experiences. In all of my years of playing games, I can safely assume that I’m now qualified in all manner of career prospects, from building and running theme parks, tending to the day-to-day life of hospital administration and even caring for crops on a fully-working farm. Well, thanks to the Nintendo Switch, I can add prison warden to that list too, with the release of the BAFTA award-winning Prison Architect: Nintendo Switch Edition.

Developed by Introversion Software and published through Double Eleven, this micro-management, slash prison simulation game, tasks you with designing, building and running your very own penitentiary, or lock-up, through a series of scenarios, rallying of resources and ticking off of tools, as you rehabilitate, execute and keep in order, the inmates of your very own prison. You have an extraordinary amount of freedom to run and maintain your own private facility; well, more freedom than the inmates, but as long as your budget allows, you get to design and build each wing and facility within, producing either the harshness of Alcatraz, or the softness of Ford Open.

However, in order to be a successful warden, it’s important to keep your eye on every ball and angle in order to be able combat any given situation; from maintaining an adequate power supply, controlling a full-scale riot (should one arise) and possessing the facilities to cater for a death-row ruling. It’s a tall-order and one that is as hard as nails as the inmates themselves. Despite its challenge, the array of options that are available to you, as well as an accessible mechanic in menu building, provide an easy-to-play design in order to get things started. Be warned though, the larger your facility, the more scope there is for disaster and the bigger your task will be in maintaining law and order. 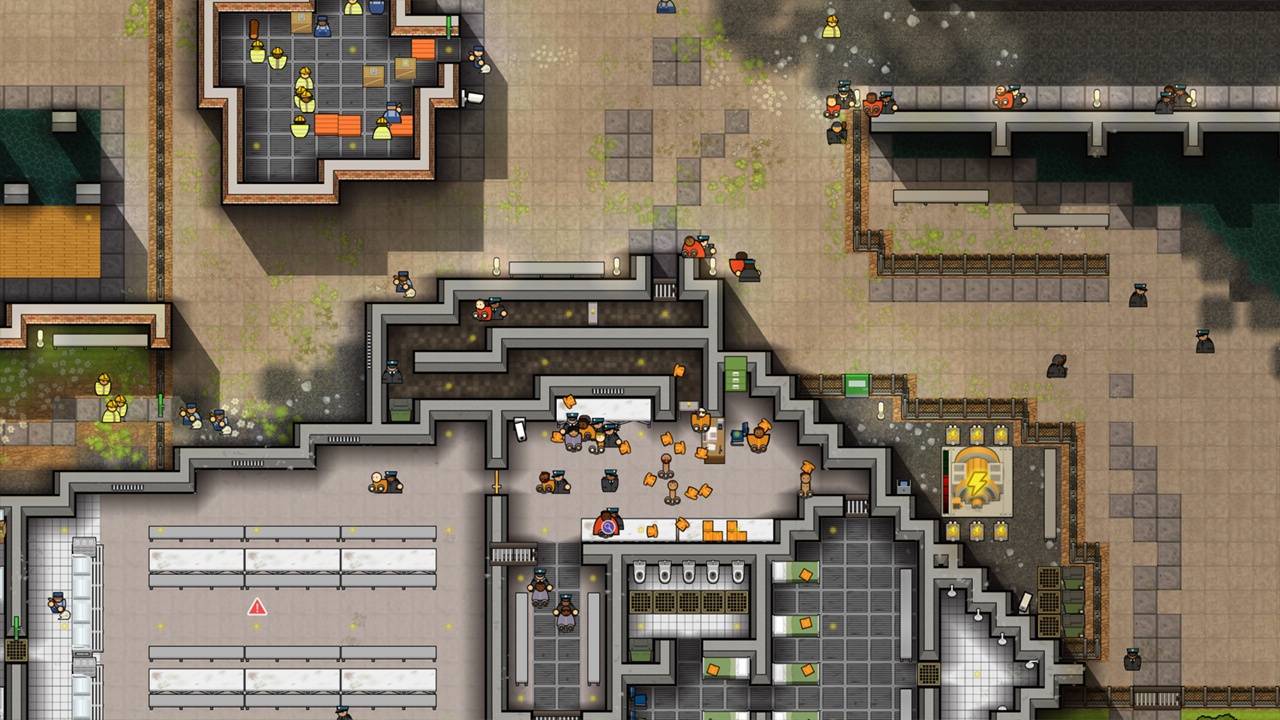 The reasons for this are down to the level of planning required for each build. It simply isn’t a case of selecting an object, or room and simply placing it where you want it to go. You need to build foundations, separating walls, add furnishings and floorings, consider security and provide suitable links to water and electricity supplies. However, it doesn’t end there either, as with each new build you need to maintain them; from providing clean showers, ensure you have adequate food supplies and all systems remain in good working order. Then there’s the human aspect. Hiring staff and training them in their relevant roles is vital; even down to manually providing patrol routes for the guards so that their presence is known.

Despite a massive level of depth and playability, the game also possesses a number of options to cater for any style of budding prison warden. If the thought of building your own prison from scratch feels like a daunting prospect at first, then you can choose to take control of pre-built facilities, or even try your hand at player-built creations; as well as upload your own facility for others to try. However, Prison Architect also does a good job of explaining its mechanics through a series of clever tutorials. These play through a campaign-style of levelling, presenting you with a number of scenarios that explain the different functions that the game contains. These are cleverly done, with touching and interesting stories behind some of the reasons why some people are in prison already. 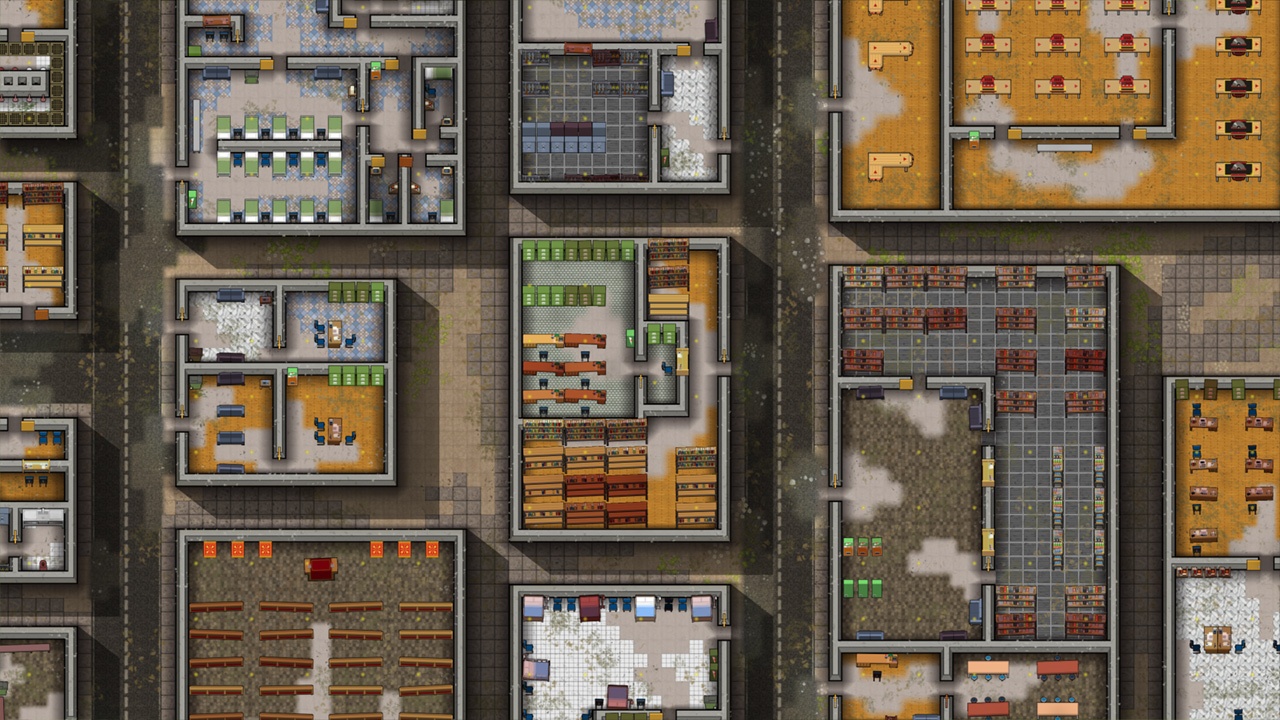 There’s a fine balancing act here between running and maintaining a prison facility. In order to progress and produce larger prisons, you need to make money. This is obtained through receiving funds for each inmate held within your facility; the more prisoners you house, the more money you make. However, the more convicts you have, the wider the scope for things to go wrong; and go wrong they surely will. Fail to maintain a suitable living condition and you run the risk of the inmates rebelling, even rioting. But that’s too simple and is something that you would expect. However, where this game excels is presenting the unexpected, such as power outages from insufficient power supplies, eventually leading to full-blown fires that not only damages buildings, but can also decimate your prisons population; thus reducing income. Oh, and expect the odd escape or two too, forcing to rethink strategies when you think you’ve built the perfect prison.

From its look and presentation, you may think that this is a game that doesn’t hold much investment with its simplistic aesthetic. The truth is, you couldn’t be more wrong. There’s an endless amount of possibility and playability with this title, from building your own prison, learning from past mistakes to produce a newer, brighter version to playing other people’s creations in World of Wardens and trying your hand at running their institutions, or even building upon what they have started. As well as this, the game also comes bundled with two DLC expansions: All Day and a Night and Psych Ward, offering new tasks, wardens, maps and the criminally insane to ramp up the challenge. That’s not all either, as the developers will also be releasing further DLC entitled Escape Mode, in which you turn the tables and play the role of an inmate, as you put together a crew and work towards finding your freedom through escape.

Overall, Prison Architect: Nintendo Switch Edition offers a deep and rewarding experience for fans of management simulations. Its wealth and content, as well as endless depth and playability give the game a superlative value; both in terms of cost and gameplay. However, despite its entertainment values, this is a game that fits awkwardly on the Switch with its control scheme. Touch-screen ability hasn’t been implemented here, something which is sorely missed considering its mechanics. Although perfectly adequate, joy-con control of its various selections can sometimes be fiddly, cumbersome and slow. It’s by no means a game breaker, but when compared to a mouse and keyboard, its original control scheme upon the PC, the transition to console highlights the weakness in this element of the game. Saying that though, this is an engaging title that contains hours and hours of gameplay. If you look back at titles such as Theme Park or Theme Hospital with fond memories and are itching for a similar experience, then Prison Architect: Nintendo Switch Edition will duly deliver; often keeping you confined as it sentences you to a lifetime of playability.

Design, build and run your own prison as a wealth of options and depth sentence you to a lifetime of playability.