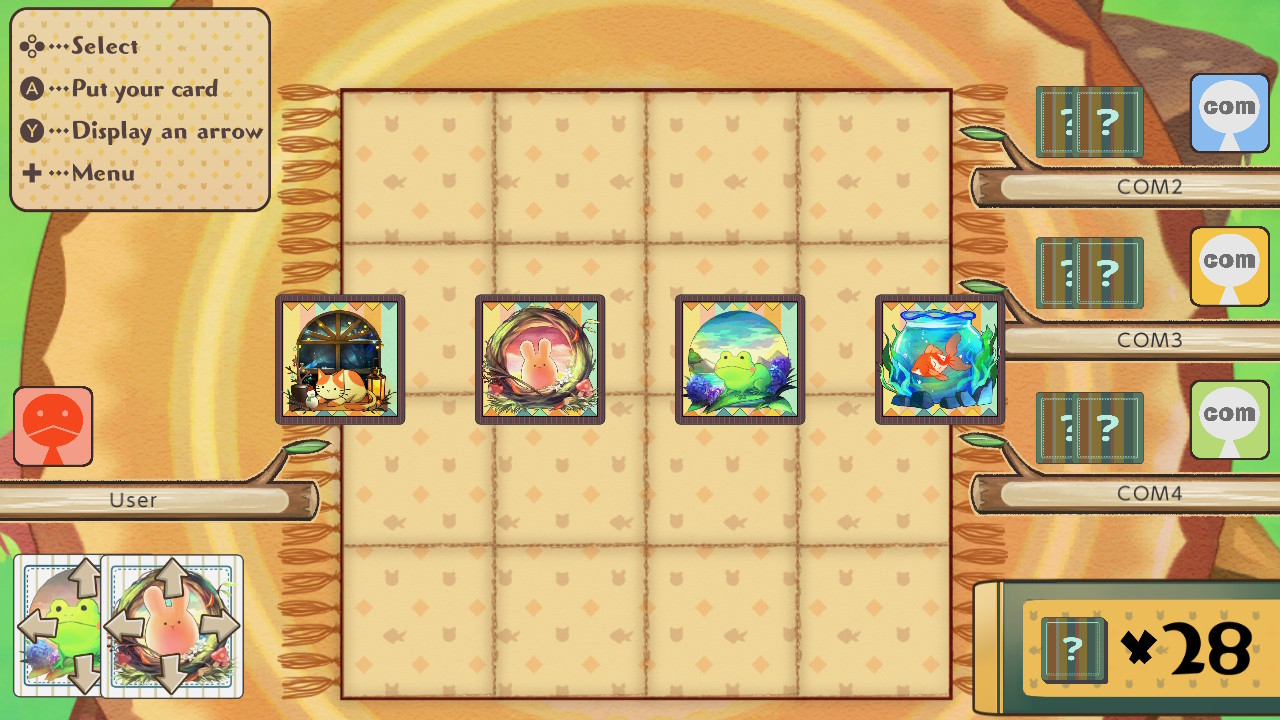 A truly great game is one that feels easy to learn, but is hard to master. When you take some of the classics, such as Gin Rummy, Hearts or even Pinochle, you’ll find people who’ve been playing their entire lives, running in circles with friends maybe for decades to see who can be the best at the hand for that day. After all, card games also require a small dash of luck, so even the most well matched opponents might find their downfall if someone else pulls the Queen of Spades. This is the style and mentality moving into Flip Over Frog, a combination of board and cards, that’s come to the Nintendo Switch from MUTAN.

The concept is simple: every player is issued a secret animal at the beginning of the match, be it frog, rabbit, cat or fish. You have three tiles in hand, and you play one each turn. Tiles will have arrows either on the four corners or on the four lines, and adjacent tiles will be affected when a new one is set down. So, if you have a face-up tile that connects with a new tiles arrow, the old tile flips over, and vice versa. If a tile is flipped over, you can play another tile on top of it to create a mirror card. Occasionally, a rare candy tile can be played to eliminate any tile of your choosing. The game ends when the board is covered and no other moves can be made, at which point the animals are revealed and the points are calculated. Most rounds will end with someone having a high score around five or six, so this isn’t a high stakes game whatsoever. 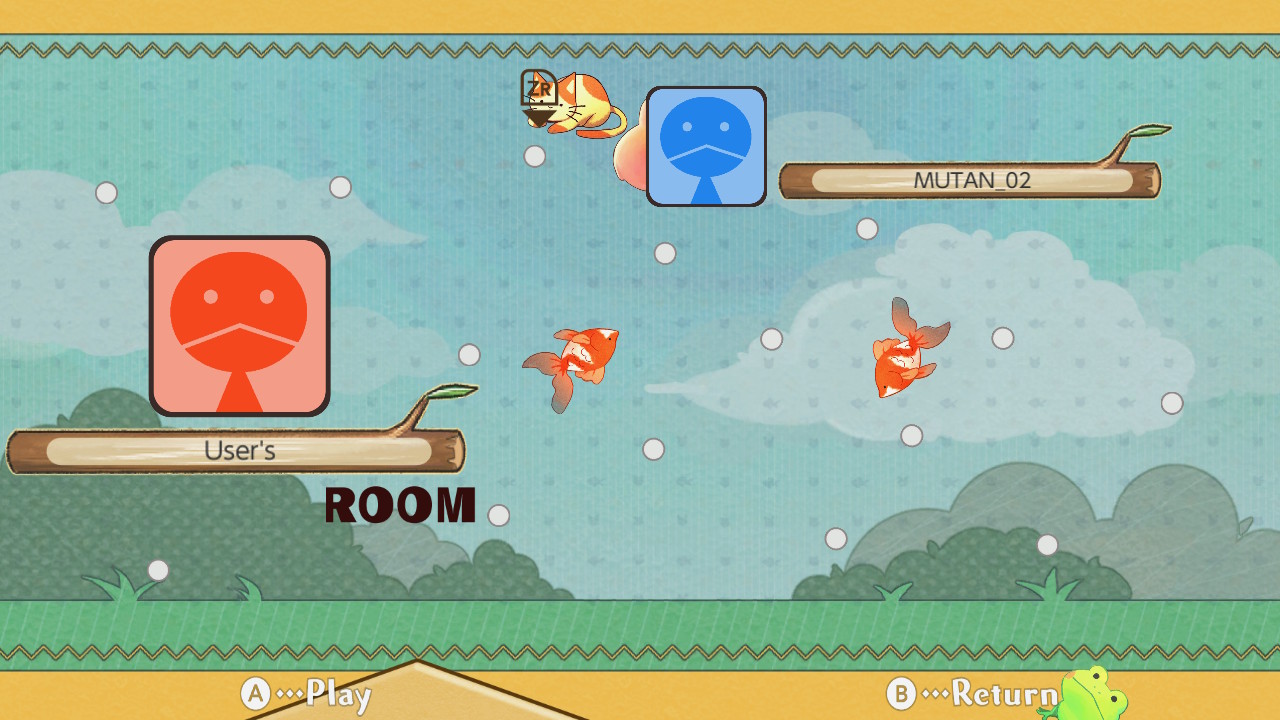 You have three ways to play: a practice mode for getting familiar vs a variable number of CPU opponents, an online mode and a local mode. Straight up, despite several attempts, I never found an online opponent to play against. I think this game is still relatively too new/too obscure for there to be a massive number of players, so I can’t really weigh in one way or another about the online play of Flip Over Frog. The same also goes for the local mode, since you need another Switch with the same game in order to do as such. Which makes sense: you can’t just ask your fellow player to close their eyes during your turn to hide your secret animal. Still, with no way to really play against human beings, I can only attest to the inherent nature of the game and how it works against the computer. In that regard, Flip Over Frog is, well, it’s alright.

Firstly, the game perfectly captures the right tone and aesthetic to go along with the theme. Everything is bright and pastel, with cheerful music and some pretty relaxed, groovy music with just a little funk to it to keep things active. The four animals are cute little sprites, with no animation or real effect happening, just being cute, static animals. This is so nonthreatening it practically comes with a “Free Hugs” t-shirt. Literally anyone can get into this game unless you have an underlying phobia or trauma regarding sweet animals.

Gameplay wise, there’s not much more than originally described in the rundown of the game. The hardest part of everything is trying to read the moves and decisions of each opponent to figure out who has what animal. In four player mode, things are actually easier: everyone is accounted for, all animals are partitioned off, just play to keep your own on top of the pile. This usually results in a three-way tie for victory, but at least you’re in the right mindset. Difficulty in Flip Over Frog actually presents more with 2-3 players, since now there’s a grand variable. See, this is the chance to decide to play to win or to play to not lose. If you’re throwing down enough rabbits, you gotta check and see what else is on the board. Four frogs and four fish. Is your opponent one of those? Or are they a slow burn cat, waiting to pounce when there’s no turning back? The deeper strategy comes out more in your own mind than anything else, but it’s present, nonetheless, when there’s a dead space as to what animal may have no owner. 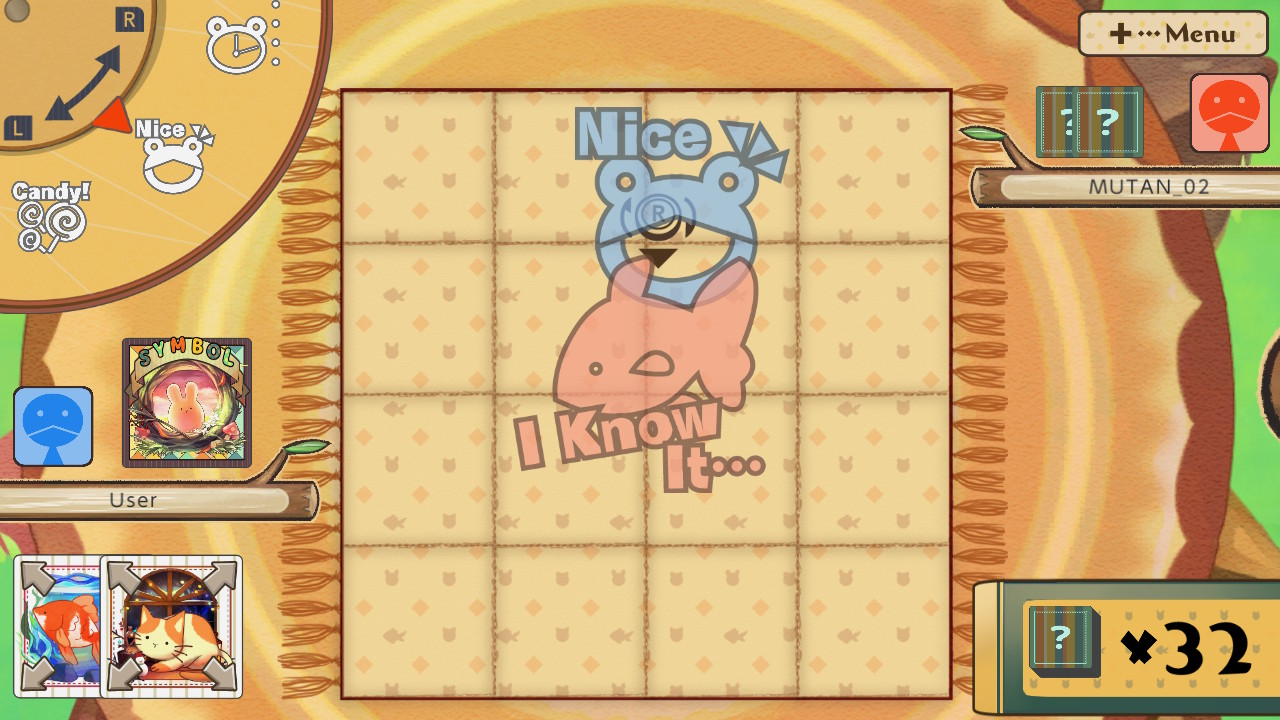 Once you’ve got about three matches under your belt, you’ve come to see and realize everything there is about this game. It’s a significantly easier version of Card City Nights, and an even simpler variation of that card game from Final Fantasy VIII. There’s no points, no attributes, nothing that adds more or less value to the cards. What you see is what you get, and the only wild pitch might come from dropping a candy down in the latter half of the game. With four players, you can guarantee that someone will fill that spot by the time it gets back around to you, it’s just a matter of how that’ll play out into the grand scheme of things. Sometimes you’ll purposely flip over one of your own cards in hopes to build a double-decker, or two of the same animal on top of each other. These can still be destroyed by the candies, of course, but will the opponents really risk it when you’re clearly baiting them? Again, the psychology is more in the mind of the player than anyone else.

This is a fun little adventure, however, and Flip Over Frog is a much more enjoyable, engaging version of Solitaire, with cuter characters and a better sense of engagement. My biggest complaint comes from not being able to do single Switch local play, though I get it based on the configuration of the game. Sadly, Flip Over Frog isn’t in a great “impulse buy” slot at the time of writing. At nearly 8 bucks, there are plenty of five dollar or less games that could grab your attention AND offer single Switch multiplayer, and it’s not like I’m gonna grind this game for achievements or secret characters. A cute idea, but not enough to derail your pennies being saved up for something bigger on the horizon.

A cute little game, Flip Over Frog simply lacks the player base and wide appeal to help it gain any kind of foothold in the sprawling eShop market.