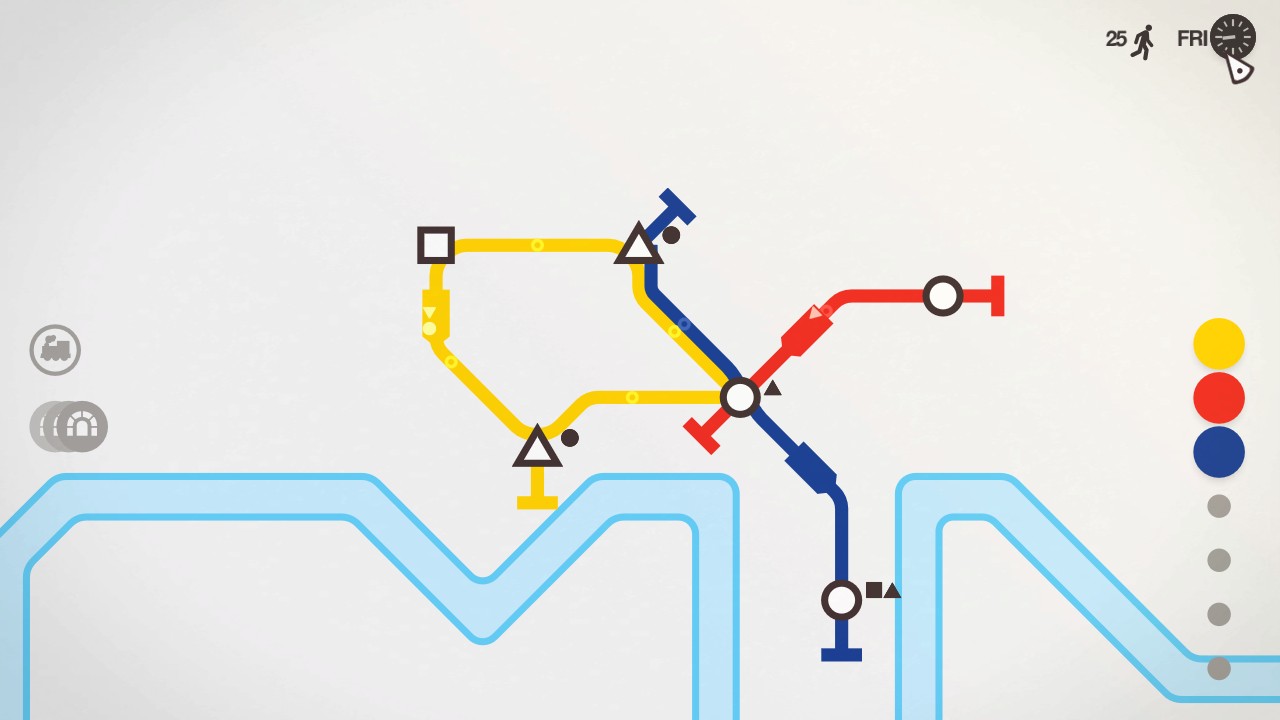 There’s an ongoing joke about the state of gaming in parts of Europe, and how their fascination with playing games that simulate real jobs (truck driving sim, farming sim, etc.) are the sole thing that keep the industry going. It’s been quite a while since I took a swing at Farming Simulator last year, and it was impressive, if not necessarily my cup of tea. But there is a moment in certain games where you simply get into a groove and you’re comfortable, relaxed and totally enjoying things. That’s the kind of groove that I found in Mini-Metro, which isn’t EXACTLY a simulation game, but still has some great sim qualities.

Mini Metro is, at the core, a puzzle game where you have to connect and maintain several train stations at once through various lines. Of course, it’s not just all about connecting things in a single path. Could you imagine trying to get from Park Street to Dudley Square in a straight line, hitting every single stop in between from all the other lines in the process? It could take HOURS, and people would willingly and happily walk or take a bicycle instead. As a result, it’s a slow-burning time management simulation as well, asking players to figure out the best places to lay new lines, when to reconstruct and reconfigure existing lines, where to add new trains and carriages, and what to do in the event of a massive influx in passengers. Should you have a single bridge over the river, or risk having two lines over precarious waters? You’re the station master, make the call.

One truly wonderful thing about Mini Metro is the calm, placid way that it brings about the game and its ideology. You are dropped straight into the game, and are left with the time and resources to figure things out as they occur. The game will give you tiny hints and nudges, especially your first run through, and then gradually expand and allow for more as you become accustomed to the world. You won’t begin with more than a couple of lines available for placement initially, and only when you’ve grown to a point where it’s necessary, then additional line colors will be presented. With each “level up” you’re offered more perks like the ones listed above (more trains, carriages and bridges), but it’s up to you to decide how best to utilize them. You might think that your busy subway needs the extra trains most, but perhaps the tight schedule will keep it flowing just fine, and the additional car on the long, sparse line will keep passengers with long wait times happy. 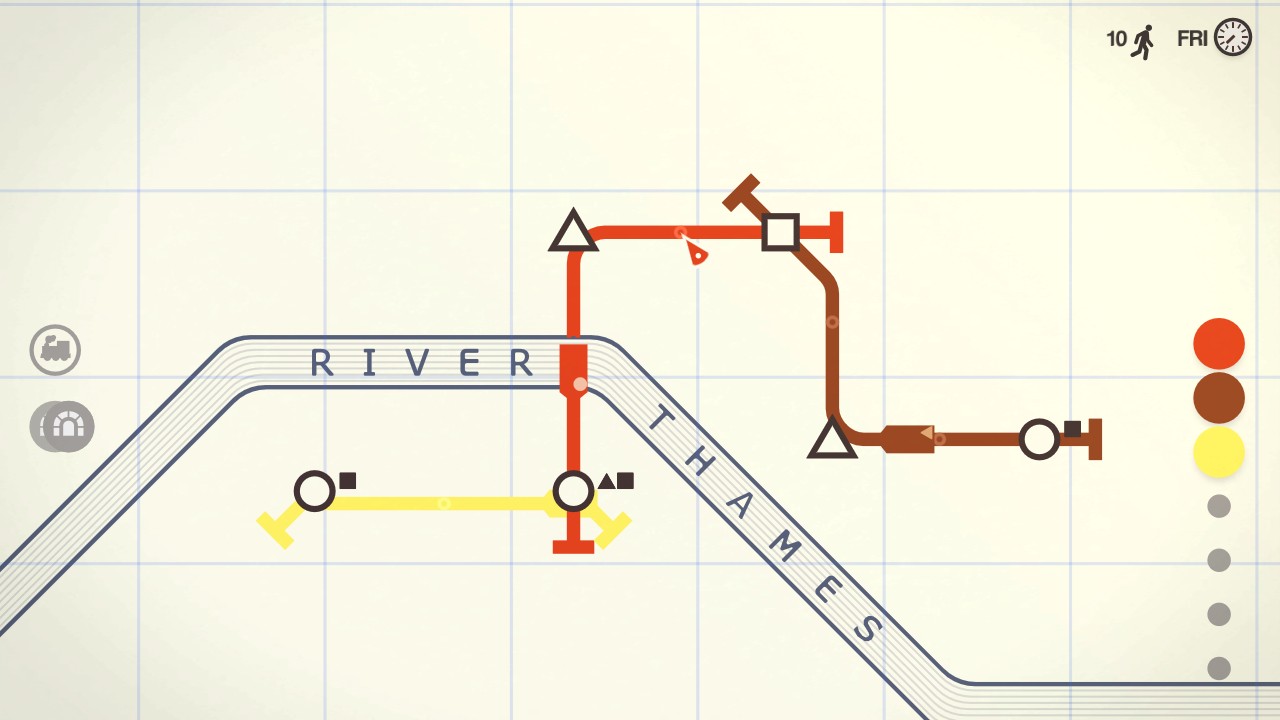 For you train enthusiasts out there (and I imagine quite a few pick up this game), the maps that you can access for level setups are all based around some of the most famous mass transit systems in the world. You start off in London because, well, that’s a great place to start, but you eventually move all over the world, dropping rails in Tokyo, New York, Mumbai and even Auckland. Naturally, you’re going to have to prove your train skills by scoring high in order to unlock additional cities. Points come from successful trips by passengers across your stations, and making sure they get there on time and in one piece. After all, if you can’t hack getting folk around in Paris, what makes you think you can hack it in Seoul?

Mini Metro is definitely what I call a “frog soup” game, named after the famous line that Pierce Brosnan drops in Dante’s Peak (which apparently is anecdotal and not true, but whatever). You don’t realize how intense the game has gotten until it’s way too late and you’re out of your mind with passengers, trains and expanding stations. Besides the game’s gentle demeanor from the start, this also comes from the very aesthetic nature of the game. Mini Metro has a wonderfully minimalistic design that really emulates the subway maps from around the world, almost like you’re watching life play itself out in real-time before you. The music is very demure and atmospheric, really just trying to keep your sanity while not plunging you into silence, which is where everything tends to go to jelly in my mind. It actually started to remind me of Electroplankton at one point, where you realize the pickups and dropoffs of the patrons are adding additional notes to every move. Even as the map expands outward and you see greater and greater reach for your system, the music hums along, and you feel in tune with the different shapes and grids, all just trying to get home.

Once you really get a hang of the game, you can branch out into the other play styles. There are daily challenges (like all great games nowadays) to see how well you can fare under certain conditions. There’s an Endless mode where game over never comes, no matter how full the stations become; and there’s an Extreme version, wherein the tracks that you lay are PERMANENT, meaning no ripping everything up and trying again just because things are overcrowded. The Extreme version is incredibly tough and really will ask you to pause the game periodically to analyze and consider your next move. The Endless version, interestingly, is also a kind of test of skill, as it asks you to just watch everything happen for as long as possible. You have the option to really screw with stuff and mess with people’s days if you so choose, but it doesn’t have the same effect of the Sims, since you can’t actually see people suffering. In either case, once you’re fully invested in the game, both choices offer plenty of different ways to harness your inner city planner. 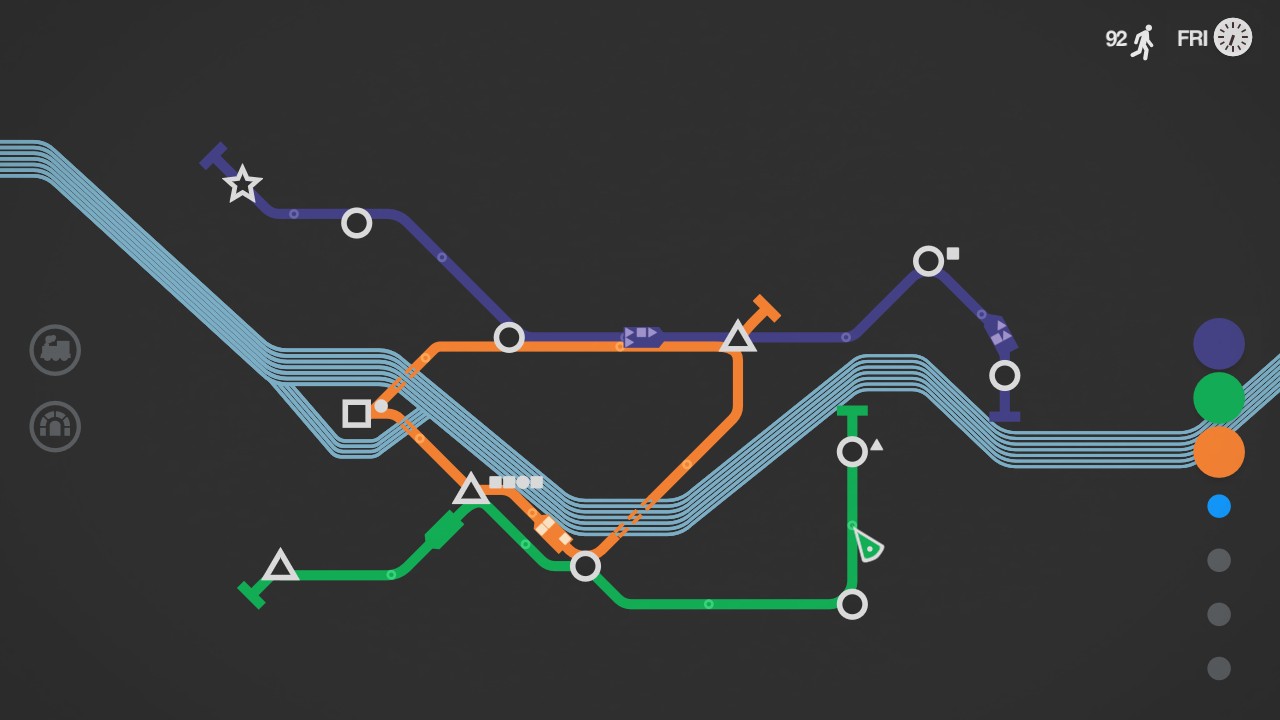 The only negative thing I have to say about Mini Metro is that it still feels like a game that’s best played either with a mouse or on mobile, touchscreen controls. The Switch’s JoyCons have been well mapped to the buttons necessary, including the fact that your cursor snaps immediately to the nearest station or train, not floating around the screen aimlessly. However, in times of snap decisions and quick thinking, you’ll find that being able to reach out and touch things – either the pause button or dragging the track quickly to a new destination – is much more responsive and urgent with your finger than with the cursor. It’s certainly still playable, and the tradeoff of having your map up on the big screen is worthwhile at least for a bit, but you’ll ultimately prefer doing things in your own hands than with remote control.

Having said that, Radical Games and Dinosaur Polo Club really created a beautiful little experience with Mini Metro. It’s completely engrossing, relaxing, and really takes the idea of time management and problem solving in a fun direction. I highly recommend turning on night mode, because I love watching the whole map come to life in the dark, and simply blocking off a half hour every few days just to assemble and watch the people mill about. Mini Metro isn’t just a puzzle game: it’s downright cathartic, and a great way to end the day.

All aboard one of the most engaging, minimalistic time management game around!