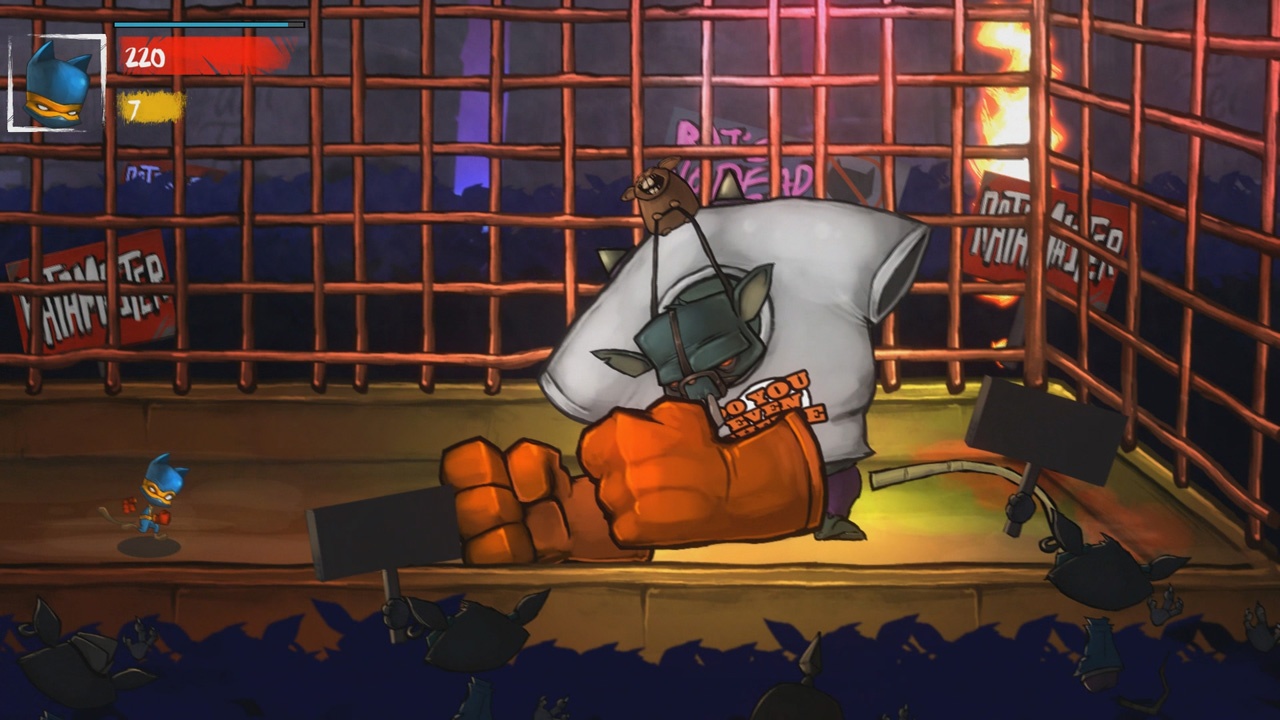 Sometime there’s this assumption about certain types of games, and these assumptions have gotten plenty of developers and creators in hot water. The biggest one, naturally, is this idea that first person shooters should be almost exclusively multiplayer, online affairs. We’re only now seeing a solid pushback in which good FPS games have fantastic single player campaigns and not just skeletal, eight-hour tutorials to get you ready for server timeout, cheaters and unfair scenarios. Additionally, we all enjoyed the arcade brawlers of yesteryear (Streets of Rage, Final Fight) and these were definitely more fun with friends, no question. Even the TMNT arcade experience was fantastic when all four turtles were represented by you and three comrades. But these aren’t exclusively group affairs: you gotta be able to represent and hold yourself up in a single player match as well. And Claws of Furry seemed to have missed the memo.

You are a cat ninja, a loyal student of the dojo of the Neko master, and you have honed your skills by his side. One day, it seems that dogs and mice have teamed up (finally) to teach cats a lesson, and they kidnap your sensei. It’s time to get him back in a good old-fashioned revenge story, and you’ll slash, smash and uppercut your way across the world to get your teacher safely home and teach an old dog a new trick: how to not mess with the cat ninjas! 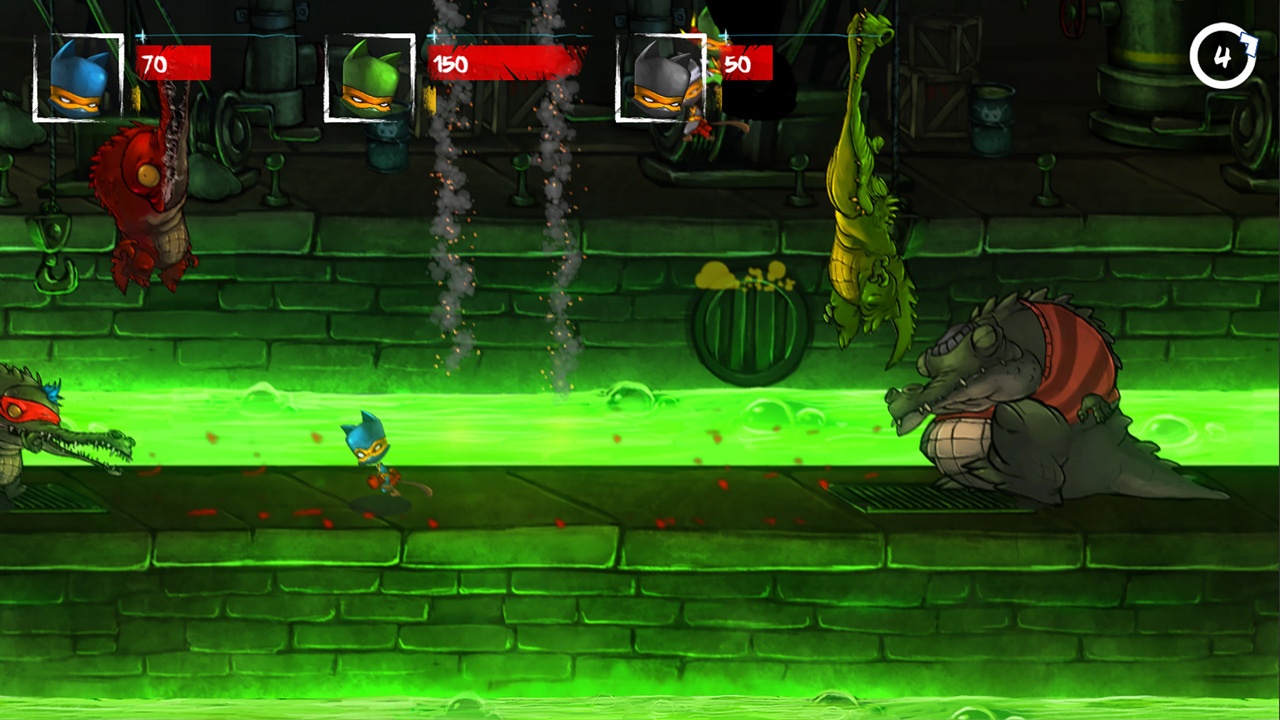 On paper, Claws of Furry is a fun little experience. You have a weak and strong attack, and you can combo your strong uppercut into this awesome bullet strike that sends the enemy into the stratosphere and then crashing back down, actually doing a bit of splash damage to other mobs that might be around. You also have an unlimited number of throwing fish, because why the hell not, and you can double jump. You also have a strange kind of charge up move that you can do approximately once every few stages, and it’s supposed to be this awesome, stamina draining attack called the Shadow Strike. The only problem is that it’s rather fast, kind of bland and only really does any damage to enemies that are straight in front of you for about five units worth. Beyond that or behind you it’s a waste of time and energy.

There are some fun parts to Claws of Furry. For one, the animation isn’t half had, and the character design is interesting enough. You’ve got a nice variety of opponents coming at you, from simple grunts and ranged attackers to some really heavy brawlers and massive bosses. Each and every AI opponent is absolutely as dumb as a bag of wet sandwiches however, and will repeat standard attack patterns based on the idea that ya’ll are on a flat terrain with nothing but clear lanes as far as the eye can see. In reality, you’re often fighting around various hazards, like spiked floors or toxic spills, and the damn bad guys have zero comprehension about what to do with these things. Worse, the hazards are set up for one-hit kill to your kitty hero, and the damage is shared with the enemies. I remember a couple of levels where I simply got everyone’s attention and then jumped to another side of the divide, letting them all fall to their deaths. This is where throwing fish really shine, since they get attention but don’t do a goddamn lick of damage worth writing down.

And, when the game is good, it’s pretty damn good. You can zip along and brawl with the best of them, being able to strike, roll away, get in some fast fish hits and then follow it up with an uppercut. I mean, it’s a bit weird: when I think “ninja,” an uppercut is quite low on the totem pole for go-to ninja moves. But it was all fun, things were progressing well, I really liked getting down in the sewers to basically lure every rat in existence into the muck. The problem is, in order to get down into the sewer, you must have your first boss fight. And that, straight up, sucked. 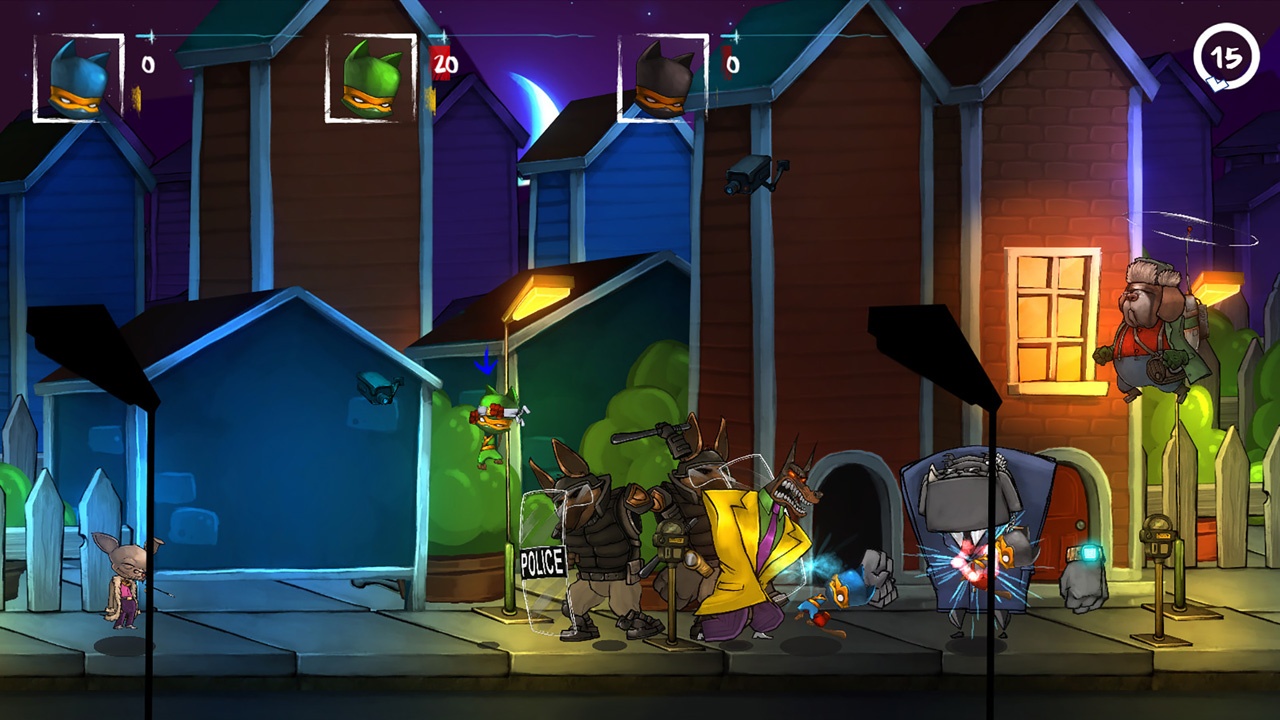 People will probably read about this and figure that the bosses of Claws of Furry are impossibly hard and that I’m terrible at games. Fair enough, I am, legitimately, bad at playing most video games. But the Ratamaster (strange name for a boss) is the beginning of a series of painfully long-winded bosses that are clearly set up to be taken on with multiple players. See, Ratamaster and subsequent bosses aren’t difficult: far from it. Like the smaller mobs, the bosses follow the same kind of unawareness and blind attack patterns, setting players up for easy wins. Yet the wins will take many, many minutes to get, because the bosses have ridiculously large health bars. Lots of health makes sense for a boss, but not when it just drags the game down to a crawl. As a solo player, it took me something like ten minutes per boss to hit a couple of times, get out-of-the-way for whatever dash/strike/projectile they had to do, and then get back in there and hit again. Since the boss only ever attacks in one direction, it’s easy to see that this is probably a great simulated raid-motif for big player based matches. But if you’re alone…it just steals your time. You can’t even set the difficulty to easier, because the only difference between normal and easy (Rogue and Pussycat, respectively) is that Pussycat won’t make you respawn at the beginning of the game. Gee, how generous.

This kind of design just took the wind straight out of my sails. The flow of the game wasn’t breakneck by any means previously, but it had some good pacing and I was able to feel like a ninja, getting in, kick some rat butt and clear the level in a good amount of time. With these arduous, drawn out boss fights, however…it was just boring. And it only got worse, making me dread moving forward in the game, however short it might have been. This should have been something incredibly fun (I sincerely love brawlers), but I shouldn’t have needed to drag along a minimum of two other friends in order to make it work. Please keep this in mind moving forward, and maybe it’ll be better when you aren’t forcing other people to play with you. However, if you want to keep things solo and smooth, you might need to sink your claws into something else.

Cute characters and a novel concept are marred by dreadfully drawn out boss fights.