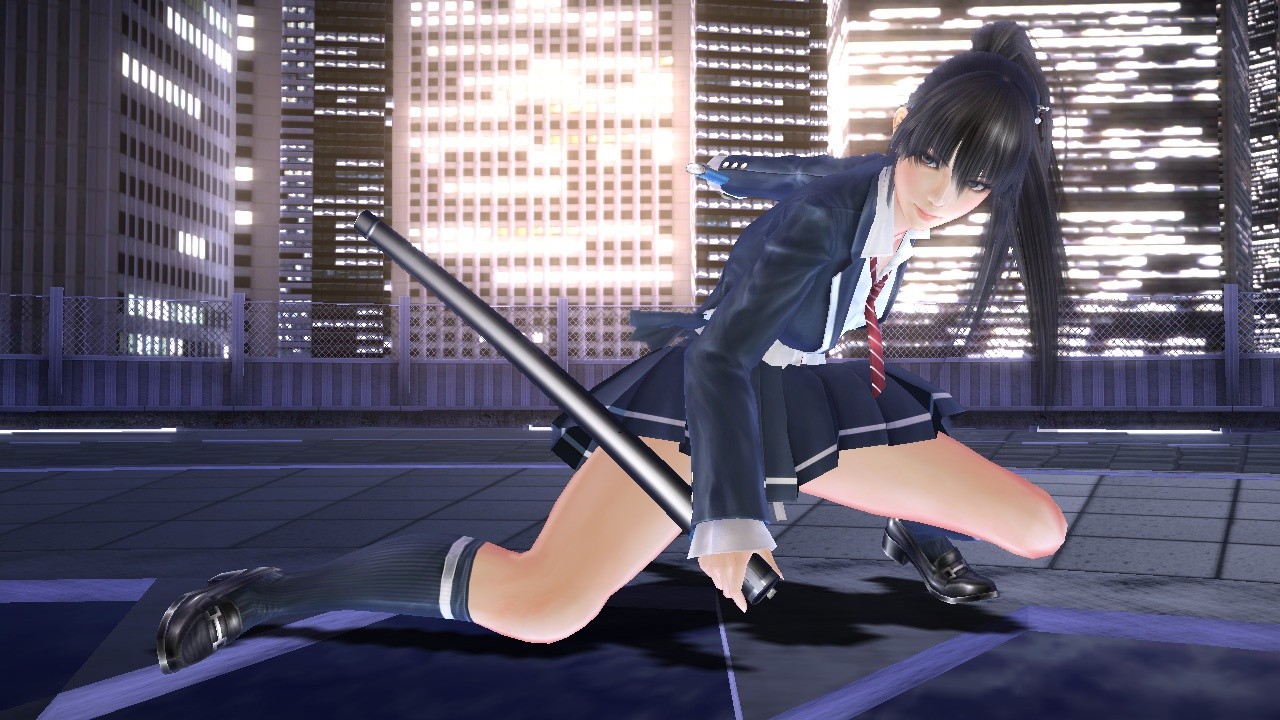 Bo Jackson is the quintessential example of an athlete never being content with only being good at one thing. Dude literally was busy all season long, running between the gridiron and the outfield, being recognizably good at both without ever becoming the best at something. Michael Jordan, on the other hand, is a better example of staying inside your lane: sure, he wasn’t terrible at baseball, but, if he hadn’t been godly at basketball, he never would have gotten a second look from the White Sox, much less any other team. He returned to basketball a couple of years later and picked up being an absolute beast. We won’t talk about his third return, but the point is that, sometimes, you just want to focus on being the best at one thing. And that’s what Mitsurugi Kamui Hikae has going for it: laser targeting on a single idea. Maybe it’s repetitive, but, damn, it’s satisfying.

The story of Mitsurugi Kamui Hikae is a convoluted one, but bear with me. So you’re Misa, who is a member of the Blade Templar, a hidden organization tasked with protecting the world from evils and demons. One of the things they guard is The Demon Blade, a cursed sword that possesses the holder and drains their life force. Fellow Blade Templar and classmate, Suzuka, gets it in her head to grab the sword one day, and now she’s hellbent on destroying the world while actively dying from demon infestation. Misa has to go hunt down Suzuka and defeat her to get the sword back before it’s too late, and also before she misses fourth period; because Misa is a high school student, as is Suzuka, and no one had time to change out of their school uniforms before getting into this mess. You heard me.

Mitsurugi was born out of Japan’s infamous Comic Market, a massive convention that’s well known for birthing some of the most interesting indie games (the Touhou series, notably) and some of the most horrifying pornography birthed by the human mind. Mitsurugi is far from pornographic, but the constant panty shots while you jump around and swat at enemies might be a matter of discomfort for more uptight players, so please keep that in mind before jumping on this very affordable title. Additionally, though there is plenty of upgrade and incremental advancement in this game, the song remains the same: this is an arena style, wave-based beat-em-up with little to no change in prime directive. Misa will go to various locations (rooftops, temple grounds…on fire temple grounds) and beat the holy hell out of a bunch of grunts. After defeating several waves of enemies, a boss will appear, testing Misa’s ability to do exactly what she just did before, but to a single opponent instead of a bunch. Boss is defeated, move onto next area, and there aren’t really that many areas. In all honesty, once you get into the motif and flow of Mitsurugi, you can probably bang out a game in under 45 minutes, start to finish. 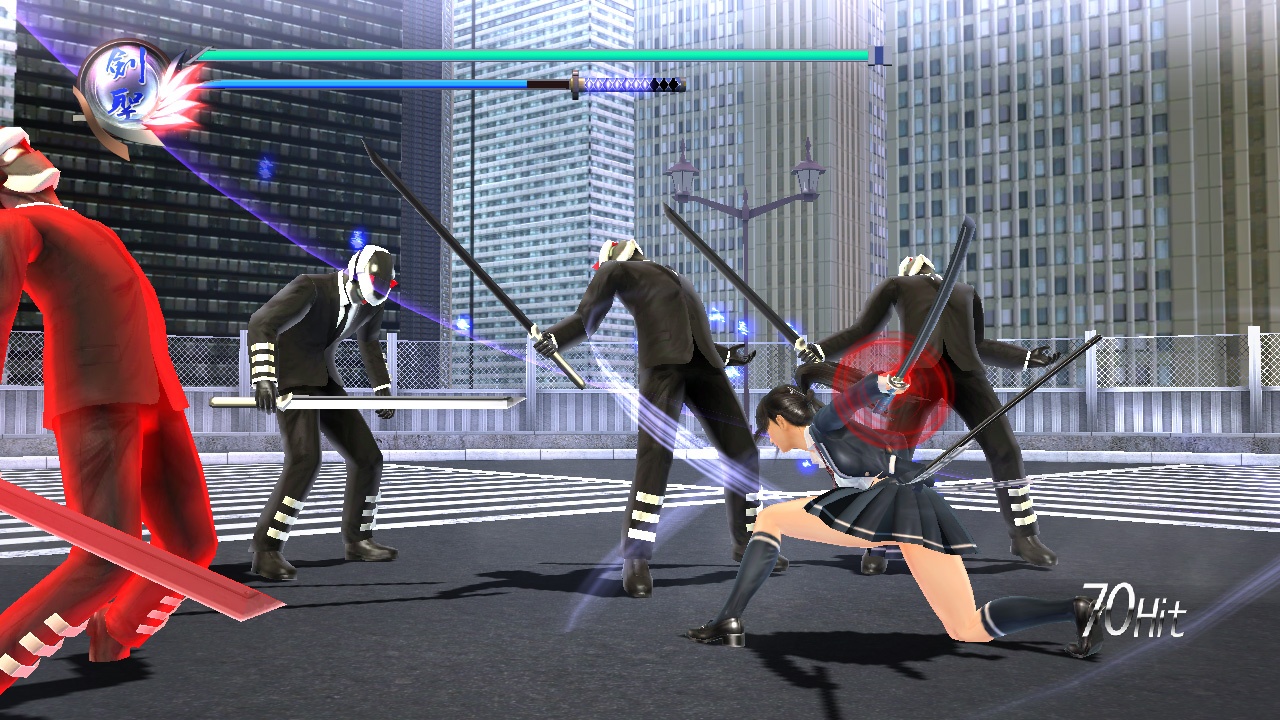 But I’m getting ahead of myself. As an arena brawler, Mitsurugi Kamui Hikae offers up some simple controls at first. There’s a quick, horizontal attack, a stronger, slower, vertical attack, and you can dodge. Additionally, there’s a charging-style attack that, if left to charge long enough, can strike the whole screen at once. Lastly, there’s this really cool “sheathing” mechanism that you can activate after an enemy is bleeding (which comes from being hit with a sword a whole bunch of times). Sheathing can gather lifeforce from all the foes who are currently bleeding, damaging them and recharging you in the same action. Of course, there are caveats: you have to build up energy in the sword before you can sheath it, and you have to do a dramatic flourish which gives enemies a chance to hit you before you can complete the action. The result is completing some very flashy hits and dodges before effectively running as far as you can from the enemies and then executing a far-away recharge to get back your health.

It’s incredible to think that Mitsurugi Kamui Hikae (which has already seen releases on the PC, the PS4 and XBox One) is four years old, and that four years is a surprisingly long time for video game chronology. When the title launched in 2014, the graphics and the flow were above-board, really showcasing some fantastic development and character design from Zenith Blue, an unknown indie who hasn’t done anything since this first game. In comparison to today, Mitsurugi is simply “okay.” Don’t get me wrong: the action and animation within the game is still top-notch, and having something slightly older on the Switch is a good balance with the more limited hardware that Nintendo has put forth. For the full game, there isn’t any stuttering or delay, no lag or drops during those crucial moments of battle. The characters themselves have a little bit of a plasticine quality to them, but, honestly, they still look more human than the recent SNK Heroines creations, so that’s something to be said. The backgrounds and settings are a bit static, though the flames that crop up in the last stage look decent enough. What I’m saying is that the game is more meant to deliver on experience and not on appearance, which is the opposite of how Misa and Suzuka originally gained a following. Interesting. 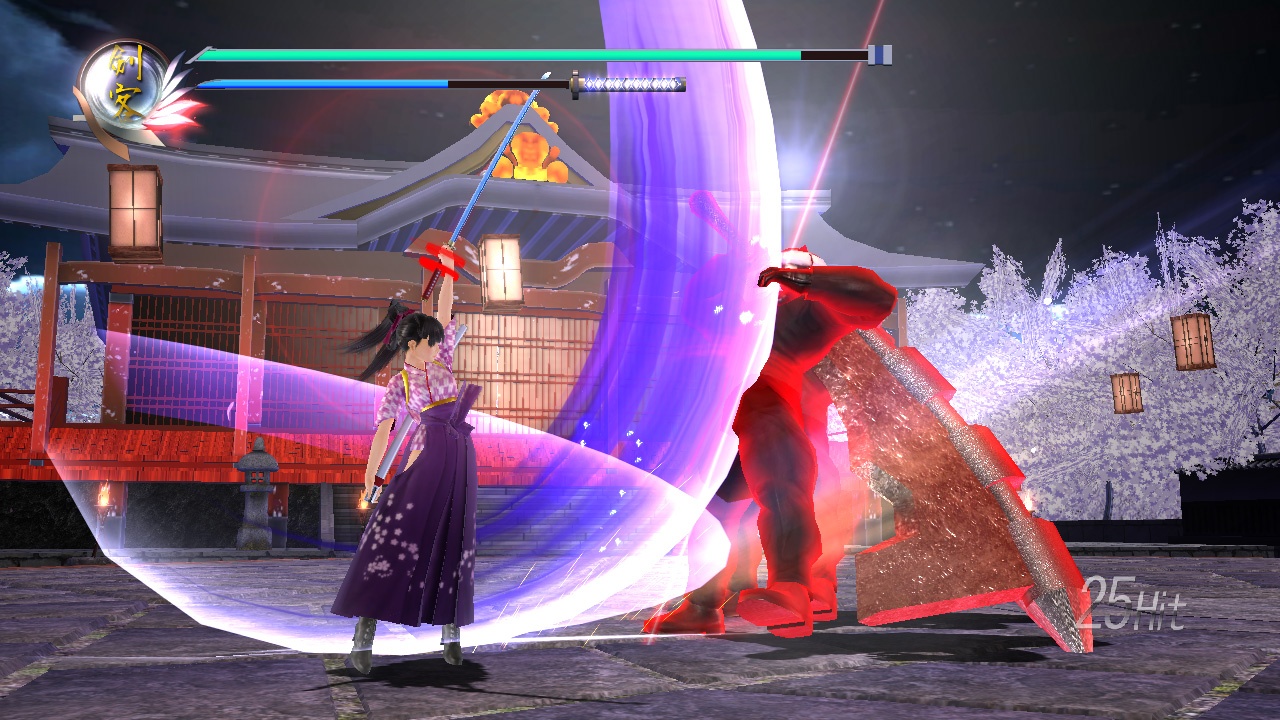 Believe it or not, Mitsurugi’s primary strength is replayability through advancement. Your first time through the stages to defeat Suzuka and retrieve the Demon Blade will be a bit of an arduous battle. You’ll feel like things are a little too repetitive in terms of combat: strike, dodge, strike, dodge, sheath, repeat. However, as soon as you’re able to finish your first play (either through success or failure), the game begins to open up. Suddenly you have points to spend on modifications to your fighting style. Unlock new combos within the game. Change the way you fight from one of tag and run to ones of brutal overpowering, landing punishing combinations that completely disable the black-suited dudes and at least leave the red ones dizzy. Get some different costumes and hair styles, because why the hell not. If you’re successful in overpowering Suzuka and getting the sword back, you have the option to play has her for future trials, reversing the roles and giving you a character change (but not totally changing the gameplay). In fact, this is one of those fantastic titles that lets you unleash your inner God Mode when given the change: brutality and might can fix all.

The best way to play through Mitsurugi Kamui Hikae is to set the bar nice and low at the beginning and do your first play on easy. This helps give you a proper idea of the way that you can and should play while also putting you in a funny mindset. Each difficulty level changes the movie that you’re in. The easy level makes you a Ninja Turtle: you can fight one enemy at a time while the others circle you nervously, occasionally trying to make a move but failing spectacularly. The normal difficulty creates a 47 Ronin situation, where most of the fighting is swarming and multifaceted, asking you to juggle different opponents and taking your licks in the process. Hard mode is a straight up Oneechanbara, as you get washed in the blood of the nonstop onslaught of everything around you, and you just need to keep moving at all times, lest you become a dead one yourself. Get through easy, add some new moves to your repertoire, then move the peg up. You’ll feel the difference.

In the end, Mitsurugi Kamui Hikae is not for the long play crowd who needs a complex story, many mechanics, character customization or any sort of traveling whatsoever. This game is static violence with a dash of fan service to help balance out the relentless button combinations and straight up mayhem. It’s damn fun, don’t get me wrong: if you love these kind of brawlers, then it’s great, progressive, enjoyable action. I know there’s a ton of indies on the Switch already, but I’m honestly of the mindset that, as long as people are buying it, there’s no problems to be had: we could all use more schoolgirl swordswomen in our lives.

Just because you’re rocking an awesome skirt and knee length socks doesn’t mean you can’t dole out some of the best fast action that the Switch can provide.