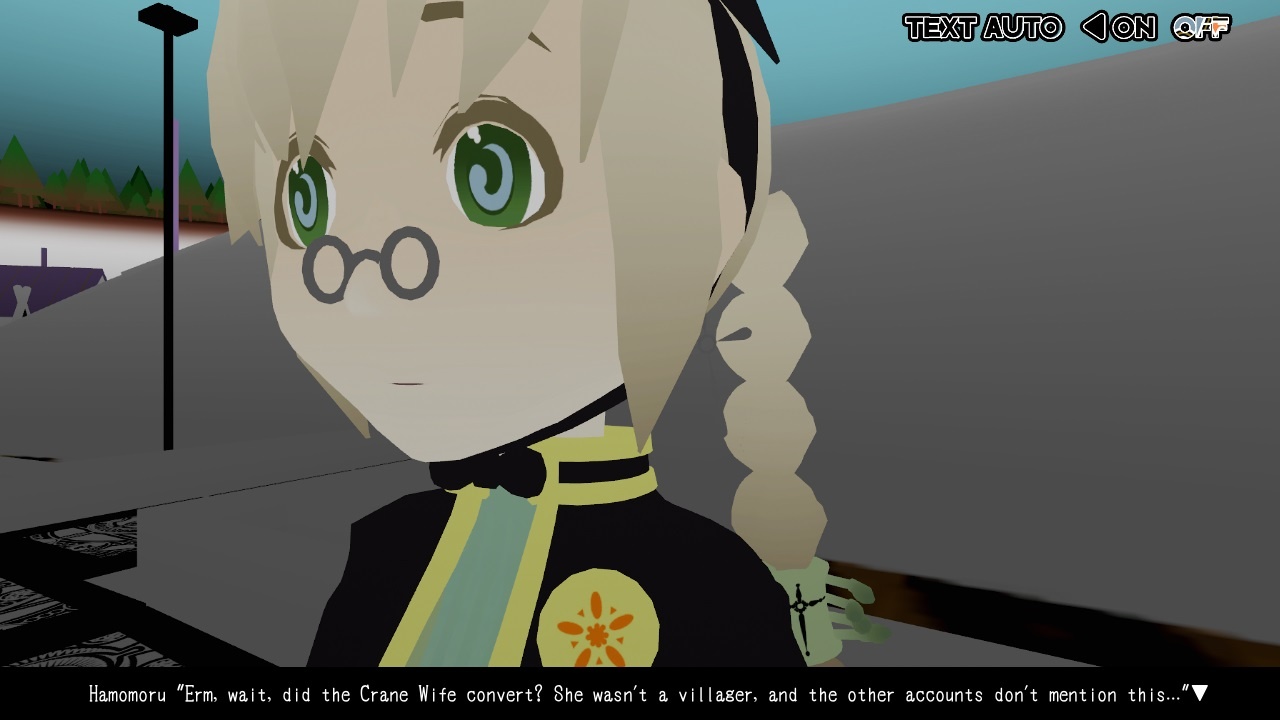 A truly great visual novel does a fantastic job of making the reader/player borderline uncomfortable with questions and ideas that they didn’t expect to have to explore today. Titles like Higurashi, Umeneko and even Nekopara put you in a position where you ask about life, death, morality, love and meaning. In the case of the latter, also about what is legally alright when pets and humanity blend, but that’s a topic we can better cover when NEKOPARA Vol. 2 hits the Switch. The point is, all of these games love to posit rhetorical questions that then sit in your mind and fester for a while, leaving you to think about the meaning of it all much later. For CAVYHOUSE, the makers of The Midnight Sanctuary, it seems they’ve done a marvelous job of letting the players lie awake and wonder: what is my faith?

Tachibana Hamomoru is a sort of an odd character, a spiritually attuned clergywoman who lives in early 20th century Japan. As if by chance, she is invited one day to visit the village of Daiusu, which boasts being one of the oldest Christian sanctuaries in Japan. Existing for centuries, the town leader, Jyuan, hopes to modernize the town, drawing in tourism and helping the tiny place (with a population well under 100) beckon and attract new blood. The sitting priest, Korosu, is supportive but skeptical, wanting to make sure his congregation stays faithful and focused. Hamomoru sets out to talk to all the village members, learning about the ancient and wonderful mythology upon which the town is built, from the variant of the classic story of the Crane Wife to the much repeated but unexplained “Village Saint.” However, in a very short amount of time, Hamomoru stumbles upon the village’s deep, dark secret, and will, with terrifying speed, learn about the awful truth behind what makes Daiusu Village such a “unique” place to live…and to die.

It should be said that The Midnight Sanctuary is a straight up visual novel in the purest of senses. There is no branching pathways, alternate endings, ZERO romantic involvements to concern about and no missing chapters that you might stumble over. Coming in at just under three hours worth of reading/play time, CAVYHOUSE has put all their eggs in a singular basket, asking the player to spend their time drinking in every single encounter that Hamomoru was destined to have, including every small conversation, every wordless exchange with her guide, the mysterious woman in Red and several other characters, and, ultimately, find her place at the end of the story. There is absolutely, positively nothing wrong with what, as I feel that CAVYHOUSE has created a construct that’s both endearing, disturbing and, most importantly, memorable. 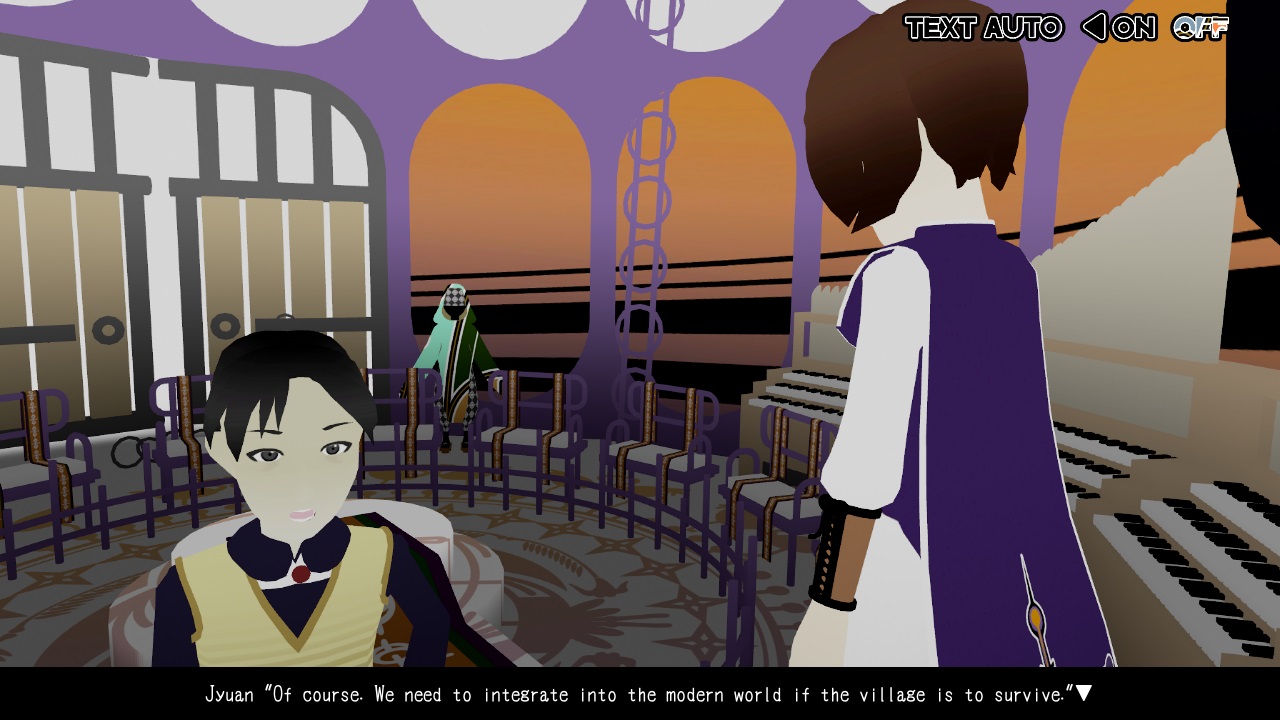 The Midnight Sanctuary is not your traditional visual novel. As I’ve gathered from other information, it seems this title will be seeing a release on VR at the same time as the Switch launch, which is ambitious to say the very least. This, in turn, creates a different dynamic as to how the story plays out and how players interact with the whole effect. For example, there aren’t static images to accompany walls of text. Instead, you see quite a bit of action happening, in real-time, right before your eyes. Instead of reading a full description of what Daiusu looks like as Hamomoru strolls across the cemetery, down a back alley or into the grand and mystifying cathedral, the player drinks it in visually, allowing them to fully see what the creators intended. This cuts down on a ton of exposition in terms of describing anything or giving verbose explanations, and, instead, limits the written/spoken text to dialogue and some inner thinking alone.

And the visual dynamics of The Midnight Sanctuary are something unique, and, frankly, very disorienting the first time that you see it. A majority of the villagers, along with certain important pieces of artifice and background, are made up of non-space, in which they seem to be cut away from the game and just glide over a static background that is made up of the game’s loading screen/the crests and symbols of the village itself. The first few minutes of the game are dizzying, as you learn to adjust to this sliding technique to give certain depth and meaning to everyone’s role in the village. After a while, however, you adjust to it, and it becomes clear how important the presentation is. You understand that characters that are given any sort of individual identity – from fully formed bodies to even different color shading – are important enough to draw your attention, and that’s what makes things like Korosu’s robes or the Saint’s bizarre dress so critical to the underlying tale of the game.

The audio is the big player for the entire game. The voice acting is absolutely brilliant, no doubt about that. The cast who give voices to Hamomoru, Eku, Jyuan and the others have done an amazing job, painting a wide net of awe, fear, distrust, sarcasm, sorrow and, eventually, resignation. The musical cues work throughout, letting you feel the atmosphere of the game gradually shift from some upbeat, happy tunes to outline the quirks of the village, to the shift in silence from nighttime in chapter one to nighttime in chapter four. It’s shocking how quickly the same level of quiet can go from peaceful to stressfully ominous in just a few short days (the entirety of the game takes place over a week, if you can believe it). There’s this unbelievable tune that’s sung at the end of chapter three, called Red Forgiveness, that is positively haunting and mesmerising. If you can find a version without subtitles, give it a listen: it’s wonderous to hear, but it’s also very expositional and gives away the big twist in chapter three itself. The ending song also does a magnificent job of capturing certain elements of the entire game, mixing in the slightly horrific revelations with the undaunted positivity of the villagers. 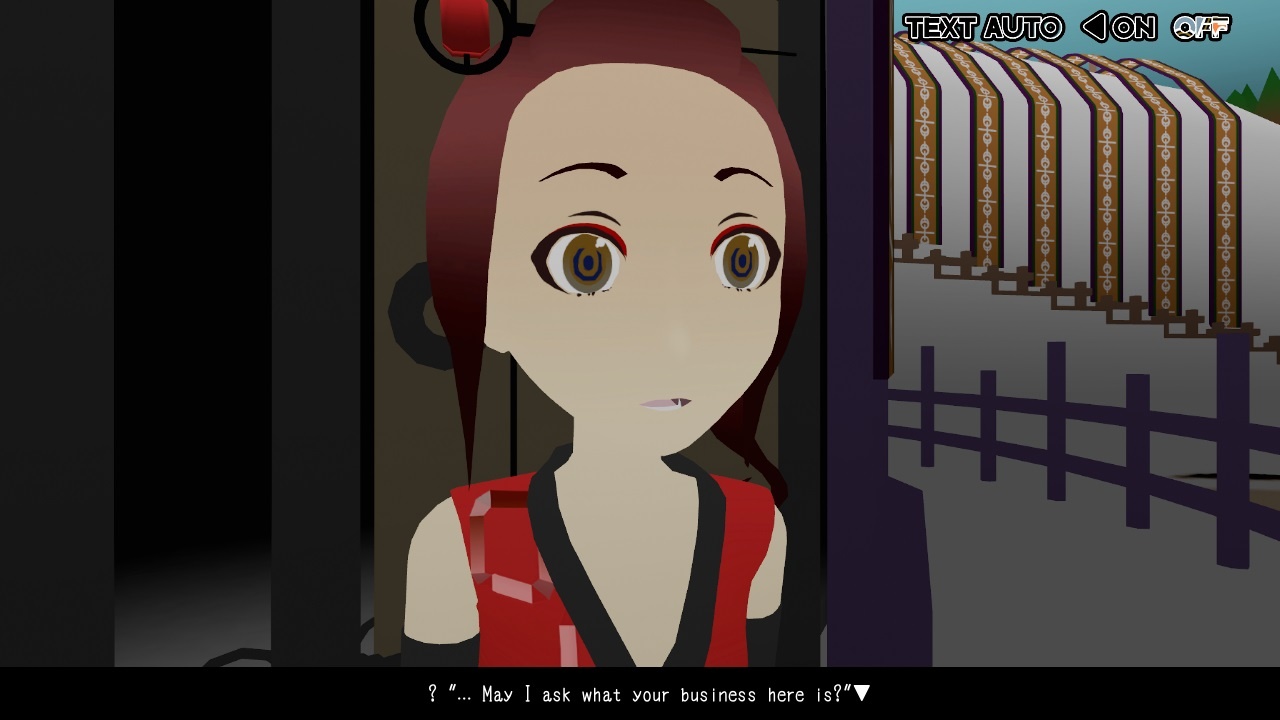 But of course the main crux of this all is the story, and The Midnight Sanctuary delivers in a strong way. The build from chapters one to three is a strong one, gradually turning up the heat until we reach a drastic climax that shift the tone and the tides in a big way. Chapter four starts out promising with an important flashback that answers a couple of questions, but the chapter itself feels like it’s over in a moment, barely giving the players a chance to register what has happened or how this is going to affect the outcome of the game. The final chapter, Chapter Five, does a reasonably good job of wrapping up the storyline, but I am left with several questions that I can’t voice in this review lest I give away a majority of the point. The one thing I will say is that the ending of the story feels distinctly Japanese, and I mean that in the best way. A lot of visual novels seem to lose something in their localization because there’s a need for Western audiences to have closure, something that tells them “these guys won, these guys lost, etc.” Instead, there’s a beautifully vague, open-ended moment where the credits suddenly role after a strange but expected proclamation from Jyuan, and we do have a minor epilogue where Korosu finally gives us the reason as to why the visual novel is named as such. The pacing is fantastic, overall, and I rather like some of the snapshots that we get in the beginning that almost paints things in a comical light. Hamomoru’s obsession (unconsciously) with eating is a great visual gag that never seems to get old.

It should be warned that, since Japan is not a Christian nation, they have no problem playing around with different ideas, ideologies and concepts when it comes to the faith and what it means to Christians in Japan. The two most devout people in the game (Hamomoru and Korosu) stand on different polarities of faith, and yet neither seems to cancel the other out. These notions of faith before the Cross in no way negates the existence of the mystical, mythical background of the town, nor does it necessarily conflict with the big reveal about the town’s secret (though Hamomoru does question it a bit at one point). Though certain aspects of the plot are something that the audience can essentially guess before they’re fully revealed (the Saint’s true plan becomes painfully obvious), the dialogue and careful but never aggressive arguments give a lot for the player to reflect on, and keep everything exciting, even if a certain trip to the kitchens or the river turns out to be nothing more than a short dialogue with no one in particular.

Overall, I truly, deeply enjoyed my play of The Midnight Sanctuary. Though certain things definitely caught me off guard in a big way (suicide is definitely a presence, if that’s a problem for anyone) I was kept enthralled all the way through to the end. The audio is fantastic, the visuals are truly memorable, and I love seeing CAVYHOUSE take their loyal mascot/creation and bring her out into more interesting and spellbinding cases. If you enjoyed The Starry Midnight We Make or even My Organic Garden, you’ll love the storytelling of The Midnight Sanctuary. If you’ve never played either, that’s more than okay: there’s plenty of original concept, plot and execution here to interest even the most skeptical viewer. And, in the end, you’ll have a fantastic playthrough of this differently laid kinetic novel.

A quiet village, an unusual history, and a bizarre secret that keeps them all together…