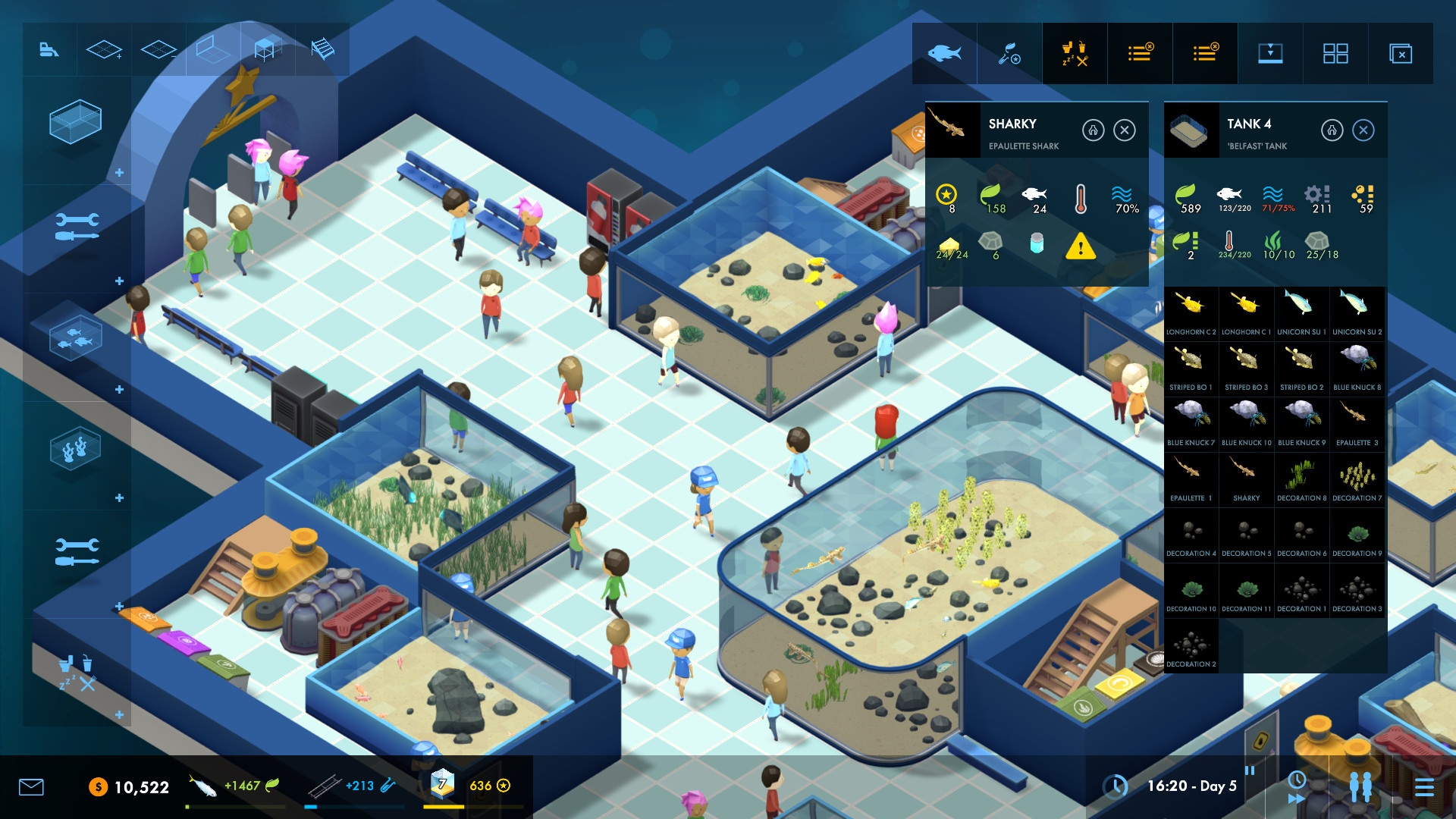 Back in the day, the PC had some awesome business management games. The likes of Rollercoaster Tycoon and Theme Hospital were up there as some of the best of the moment. They’re games that I’ll regularly go back to over and over – always delivering in the fun department without fail. Brand new aquatic business management title “Megaquarium” has big things to live up to, but the with the developers of Big Pharma behind it, it’s set to be a solid game.

Megaquarium lets you step into the flippers of an aquarium designer/manager and marine biologist. The player’s job is to oversee the creation of a top-notch aquarium, whilst keeping all your many and varied species of marine life alive – not to mention keeping your paying customers happy. Twice Circled’s first game in 3 years is certainly a bucket-load of fun (and crabs), despite a few minor flaws. Let’s check them out…

First up I wanted to talk about the scale of the game – it’s actually pretty darn big. There are 10 missions which teach you how to play the game; drip-feeding new concepts and gradually upping the difficulty. There is then a sandbox mode that you can dive into in order to reach the full depth of experience that Megaquarium has to offer. Just to give you a brief idea of the level of content, Megaquarium has 97 different species for you to unlock, including fish, crustaceans, coral and water-dwelling mammals. There’s also a huge range of tanks, scenery and design tools available to help you create the perfect aquarium layout. 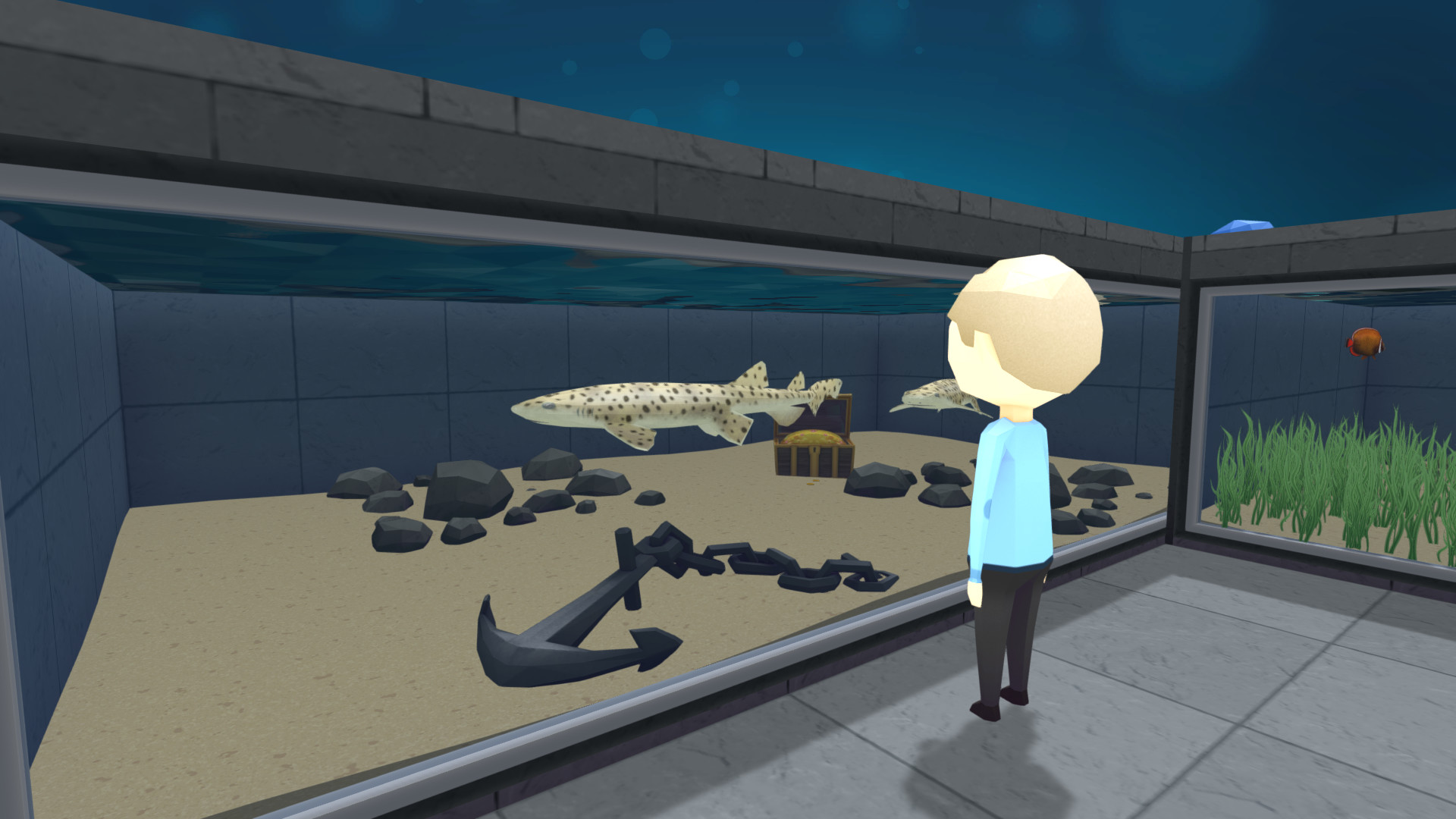 Stacks of content like this make Megaquarium worth sinking your teeth into, as the near endless combinations of different species and tank decoration/maintenance, can be very challenging. For example, all species have different needs and so it’s important to plan a tank before you go ahead and throw fish into it. Some fish might require a dark place to hide, whilst others need to be in a shoal to be happy. You’ll also find that some bigger fish might attack and/or eat your smaller species, so that’s definitely something to think about when planning a tank.

The diversity of species in your aquarium will earn you different points – kind’ve like in Big Pharma. For example, you need ecology points to unlock new fish and science points to unlock new equipment for your tanks. Some fish will generate ecology points, some science, some prestige etc. This means that all species have a purpose – a role to play in progressing you through the missions and unlocking more advanced tanks, species and equipment to adorn your aquarium.

As I mentioned this game comes from the creators of Big Pharma, so for those familiar with the title, it should be no surprise that you’ll need to plan different configurations of filtering and heating for your tanks. As the game advances, this becomes much more complicated and can require a lot of thought – especially as the customers don’t like seeing pumps and food storage, so you’ll have to hide it all away in walled-off staff areas. I really like this though, as it shows the developers have thought about how it actually works in a real-life aquarium.

One really cool thing about this game that I’ve noticed, is that the developers are putting out regular updates (too right, it is a brand-new game). These updates apparently take into account the needs and wants of the community, which is nice to see from a developer these days. 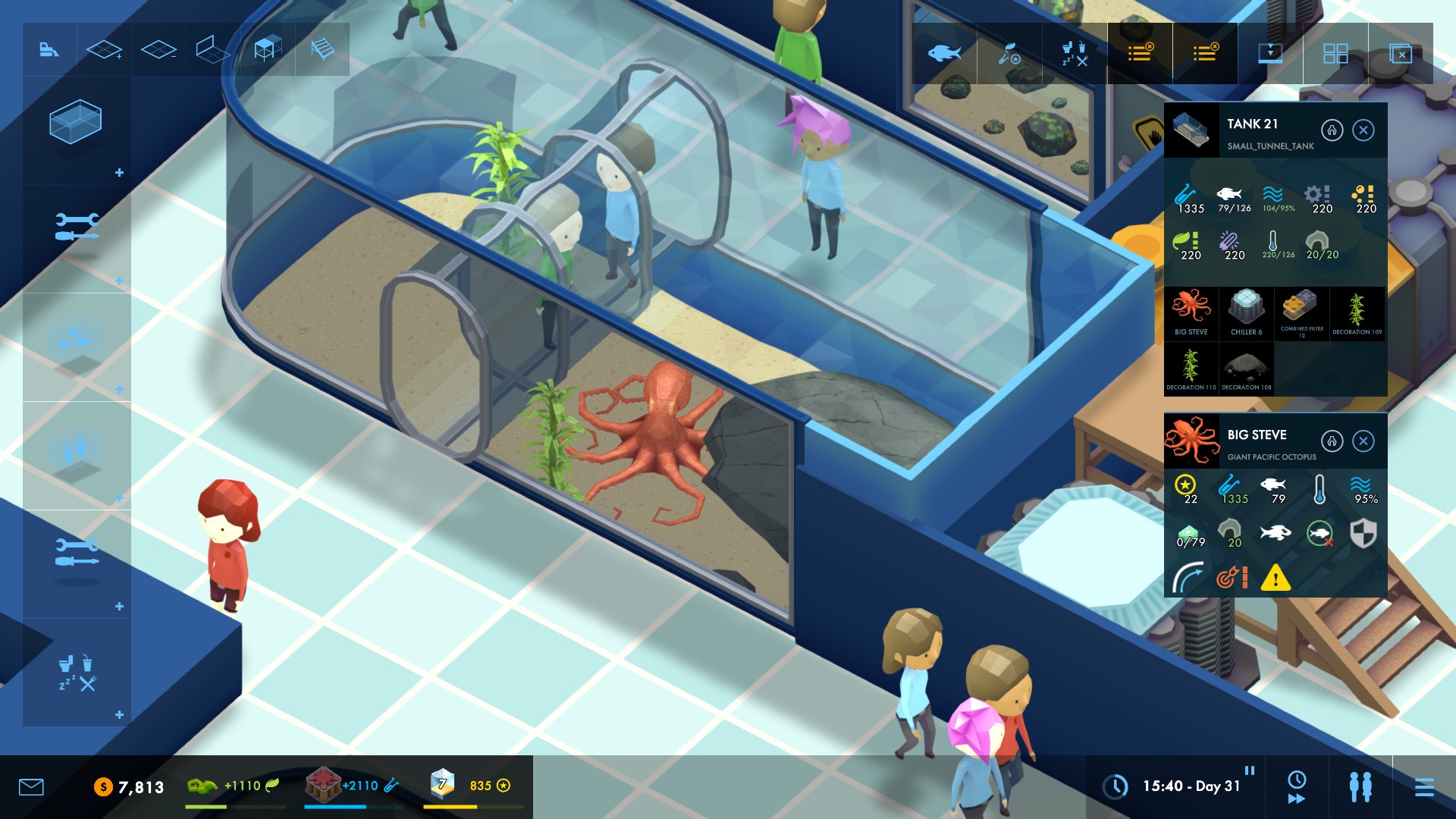 There aren’t too many cons I can find with Megaquarium after playing through the missions and having a little dabble in the sandbox mode. The main one is to do with graphical presentation and AI. First off, the graphics look good all the time you’re zoomed out and at a certain angle. I feel that this was the way the game was meant to be viewed, but for some reason you can zoom all the way in and take the position of a paying guest in 1stperson. It looks naff and suddenly all the customers look like a Mii horror movie gone wrong.

I found that AI movement was very jagged and often people appear to wander with no purpose until they are dragged in by a bench, drink machine or exhibit in the aquarium. The actual animations themselves are devoid of personality and very wooden – something I hope will be altered in the future to make the game feel a little less hopped up on cuttlefish. This jaggedness extends to fish and other aquatic specimens, who will swim in straight lines from A to B. The last presentation problem I came across was that sometimes the selected item image appears outside the intended box – instead appearing near the top of the screen. Not a major issue though!

Overall, Megaquarium is a really fun new title. It’s easy to get into and features great tutorials that are based in objective format, yet it’s tricky to master and satisfying to combine different species of marine life. The developers aren’t money-grabbers and are really keen to hear the ideas of the players, so in my mind it’s absolutely worth investing time on this one – especially as they’re not serial releasers of games – opting for quality over quantity. Something you’ll have to do in Megaquarium if you want to become a successful aquarium architect!

Business management sims are back, but this one has sharks!!!