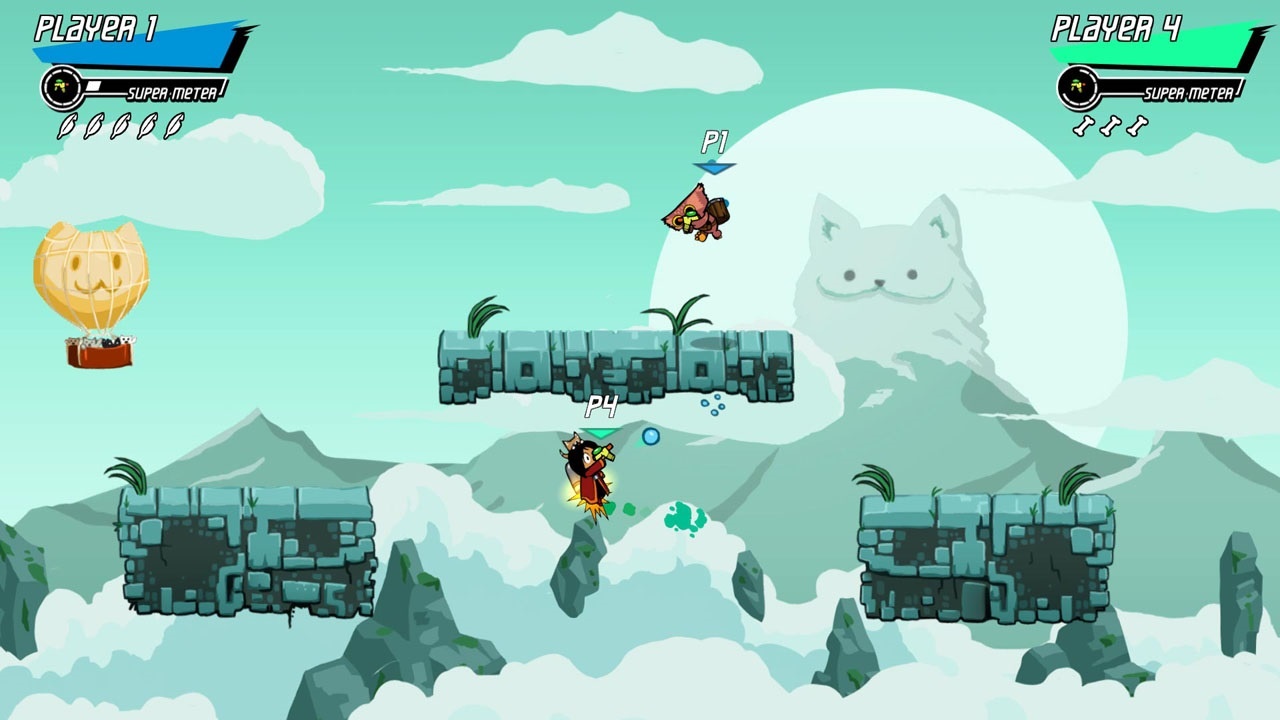 Super Smash Bros is the untouchable champion of the arena brawler. There, I said it. There’s going to be everyone and anyone vying for the crown on the Switch, but no one is going to be able to come close. I think that Brawlout, Rivals of Aether and the sort all have fantastic places for gaming and enjoyment, but they’re not gonna replace what people want and need in ridiculous action and Waluigi eventually being confirmed as a main character. So people are branching out and trying new things. I personally think Slap City is one of the best insane variants and I got fingers crossed that we see it on the Switch, but I’m happy with just seeing it on the PC for now. Still, new ideas are welcome, regardless of how they turn out, which is why I’m digging Splash Blast Panic.

Developed by Team KwaKwa (lots of great dev names, recently), Splash Blast Panic is a crazy multiplayer brawler that centers all around jetpacks and water pistols. The arcade mode seems to insinuate that there’s this dude who came to Earth and is making everything hot with fire, and you set out to stop that, but you gotta fight other characters (and robots) along the way. The multiplayer mode puts you up against three other people, trying to knock them off the screen, either a set number of times or as many times as possible before the clock runs out. As this is all about water pistols, Splash Blast Panic has a good number of power ups that are as benign as Splatoon used to be (before the Dualies turned everything into a bloodbath). You have some shields, some drones, some truly bizarre weapon changes, and that’s basically everything. There’s not a lot of story to talk about, so let’s jump into the meat of this. 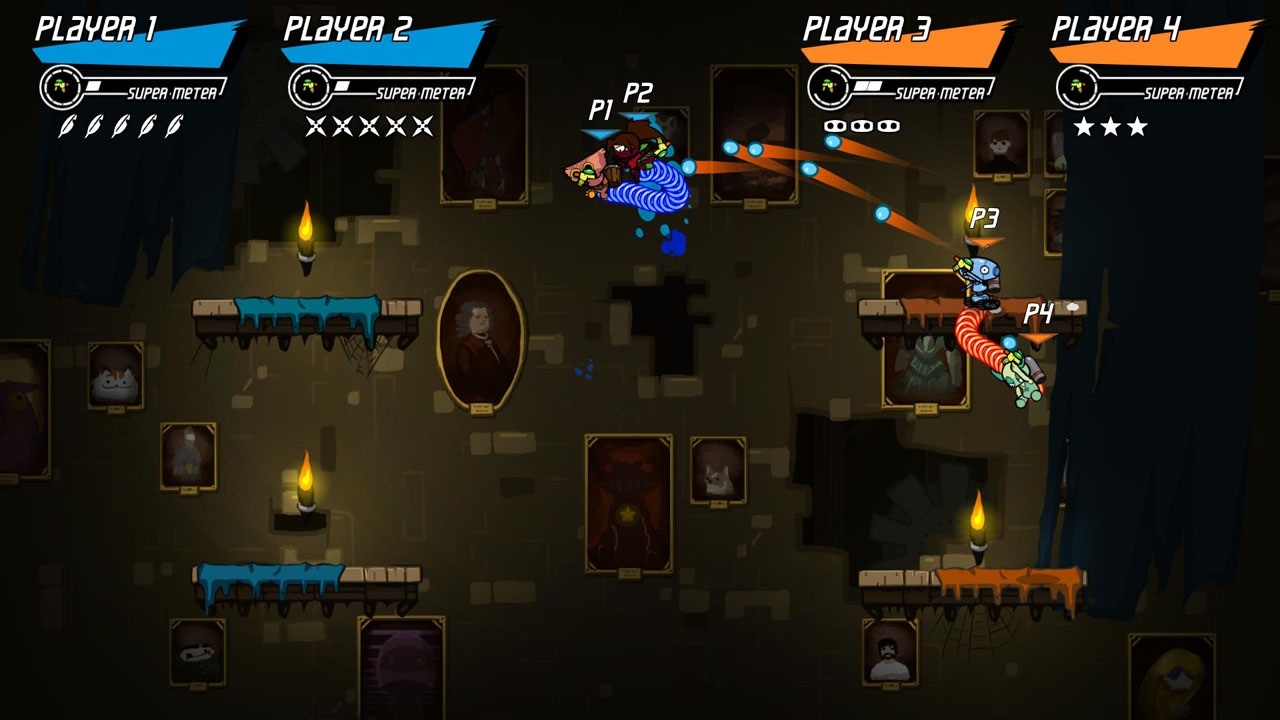 Splash Blast Panic has a series of levels with decreasingly available land to simply stand on. The main idea is to move around in 360 degrees of space with your jetpack while pushing the other opponents with your water gun. You’ll automatically “reload” when your water runs out, but it will take a moment and it seems that your jetpack also gives up during this time. It’s important to note that, with the exception of the final boss, there isn’t any “damage” to speak of during gameplay. You simply have stronger or weaker ways to hit people with water, and the only victory comes when you push them beyond the invisible barriers located on all four walls of the stages. Characters do have the ability to do a sort of air stomp where you suddenly slam down from on high, and it’s mostly effective: hell, it’s the only way to really beat the final boss. The slam has a short-range, so there’s no “fury from above” kind of full screen stomp, but that also prevents you from accidentally throwing your life away. Or at least prevents it from being too easy. Trust me, it’ll happen enough.

There’s a lot of fun things happening in Splash Blast Panic. Firstly, the character aesthetic matches the whimsy of the game itself. You’ve got characters like Cat with Mustache, Girl With Excitable Dog, Small Robot and, my personal favorite, Sleepy Koala. There’s a few characters available from the beginning, but several can and will be unlocked through the course of arcade play. There’s this hand drawn charm to them all, letting you know, unconditionally, this is both a pet project and an indie darling from the very beginning.  When they move about the screen, the animations aren’t particularly smooth, but that also feels intentional. The vibe of slight jankiness gives it a further bit of charm, and also allows characters to quickly and suddenly pop into expressions and reactions based on the game, adding more fuel to the “fun indie” fire.

The stages and weapons are also pretty fun as well. From traditional deals like “platforms in the sky” to “Scales Above Lava” and my personal favorite, “Evil Slot Machine That Never Gives You Anything Good.” There’s even a couple of stages with no platforms to stand on whatsoever, forcing players to be more balanced and aware of their uptime and where they’ll be when they need to reload. If you get the right weapons, you won’t need to worry: there is a bit of a balance issue with the tools. The Water Bomb gun has potential, but it’s slow, poor accuracy and takes forever to get a shot off. The laser cannon is a champ in the arcade mode, but it takes too long to get a bead in multiplayer and you’ll probably get pinched before the shot goes off. No, what you really need is mayhem, pure and simple. Machine gun: simple, effective, love it. Watering can, in which you suddenly start spraying water EVERYWHERE, is so broken and hilarious. The Ice Gun has an incredibly short-range, but when you successfully freeze an enemy and watch them plummet to their doom, you instantly get a smile on your face. I also quite liked the Sentinel, or at least the idea of it: it never really seemed to help me with the shots I needed to take. 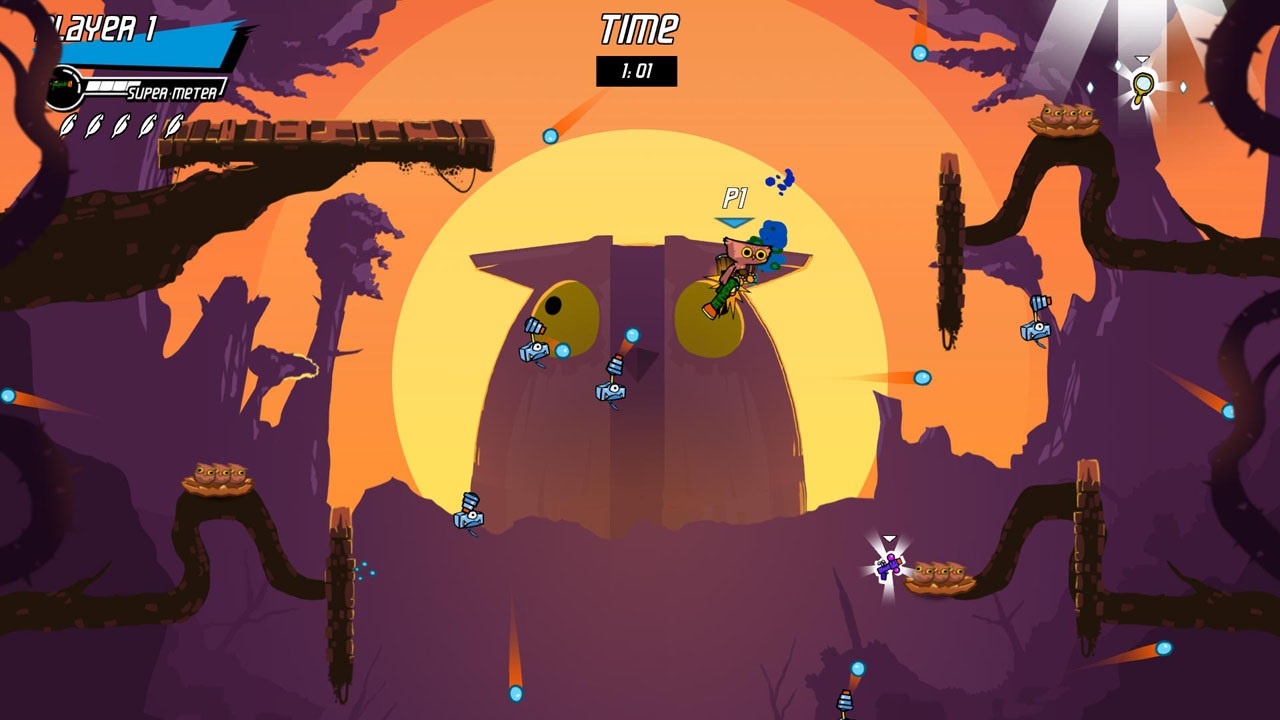 You’ll be just fine playing through the arcade mode of Splash Blast Panic on easy or normal the first time through without any real pauses on your quest to victory. The battle levels are simple enough, just keep alive till your Super attack powers up, and then you can usually murder anyone/everyone left on the screen. The time trial/puzzle levels are weird: when it comes to the robot targets, you don’t have a required number to destroy, so a player less interested in high scores could just pick off enough to stay alive and call it a day. The maze that you need to get through in a set amount of time is hard if you’re trying for a high score. Otherwise just avoid the ice vents and take your time, and you should still finish with more than 20 seconds to spare. The final boss is a pain in the ass because he actually has a health bar and won’t just die because of cheap kills, so you need to reinvent your strategy to finish him off. And by that I mean stay alive until the good guns start appearing, get the mirror shield, drop your Super as many times as possible and don’t get burnt to a crisp. The whole thing should be done (from start to finish) in about 30 minutes.

Multiplayer…man, this is where it gets hard. Needing to constantly stay in the air is a pain in and of itself, but that’s even before the other players get involved. Splash Blast Panic really neuters traditional brawler moves and skill sets by removing health bars, so you end up with unbridled chaos most of the time. This works and doesn’t work at the same time. On the one hand, if you’re all equally terrible or good at the game, it’s a fun and frantic quest to stay alive. I don’t recommend playing against CPU characters at this time, because they know where the stage boundaries are better than you and can easily blow you away from off-screen. Then again, on the other hand, when one person gets the controls better than anyone else, it becomes a fast and frustrating bloodbath. Sometimes all you need to do is just find a corner to hover in and watch everyone else scream and die because they don’t get how to stay aloft. A weird balance, but an appropriate one.

The main takeaway from Splash Blast Panic is that it’s silly fun, and I mean that in the best way. There’s not nearly enough of a tight, focused vibe here to make people think you’re going to fine tune your skills and then compete at EVO next year. This is something where you might as well turn it into a drinking game as fast as possible, because the game just keeps getting funnier the less in control people are. The mascots are cute, the weapons are pretty damn awesome, and hearing someone yell “NO” in panic because they’ve been trapped in a bubble and my koala butt is about to slam into them is always a grand time. If you’re at all interested in another great multiplayer situation where three people will definitely hate a forth, then Splash Blast Panic might be the right choice for you.

The only game in the world where everyone is going to scramble like mad to grab a watering can.