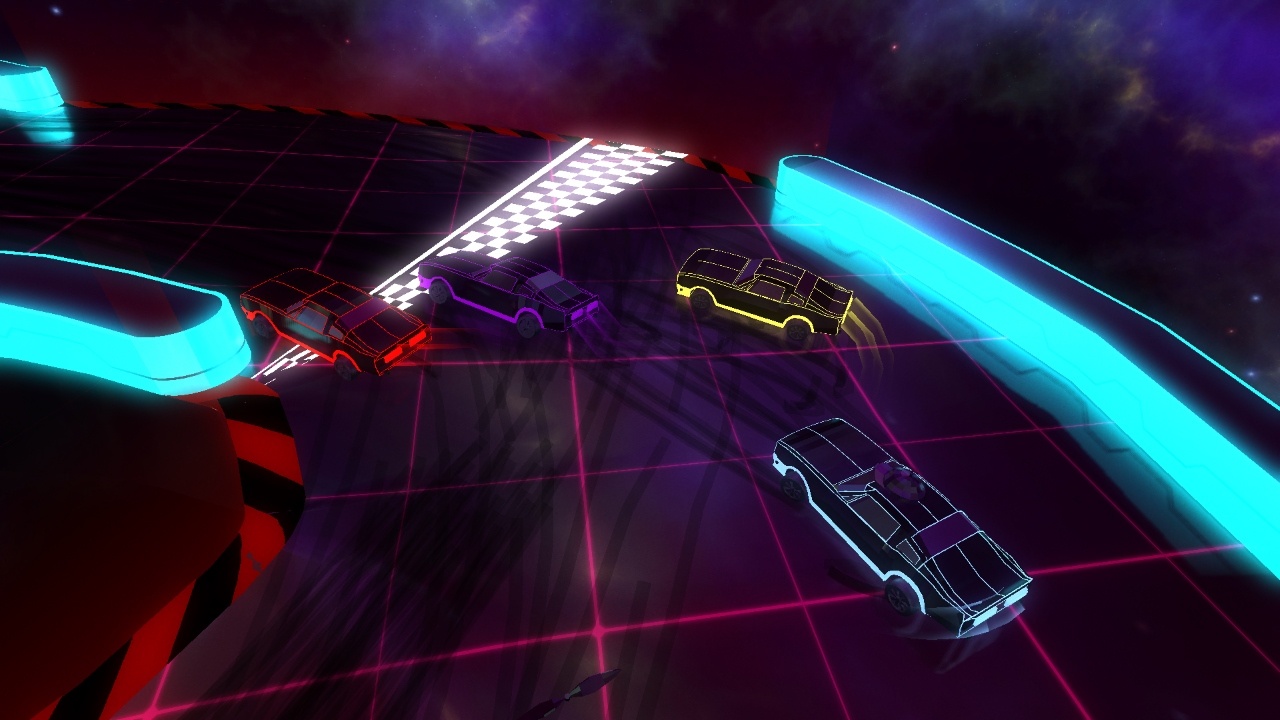 The folk of Giant Margarita have a pretty singular vision for their games, and I do love them for it. So far, they’ve put out one title earlier last year by the name of Party Golf, and I was smitten by the aesthetic and design of the game. Being able to drive through a semi-minigolf style game with the extra emphasis on pitfalls, insane physics, different levels and this general “HURRY UP” atmosphere made for some fun times in group or alone. It seems like the gang wants to keep the “Party” going with their latest release, Party Crashers, which has nothing to do with dropping in unannounced and everything with actually crashing.

Party Crashers openly admits that it takes influence from some of the more damaging racing games of the past, and it shows in the presentation of it all. As one of four cars on a track, your objectives vary from course type to course type, but the general idea is always the same: be fast, be tight, stay alive. You have things like Elimination Mode, Race, Time Trial and Battle. Each of the four modes also has different designs and ideas behind them: for example, Battle mode can have a Last Car Standing motif, but you can also see how much damage you can do in a single lap in order to be the champion. Elimination will let you see who gets taken out through time and other players, but who will be the strongest racer in a mere 15 seconds on the course?

First and foremost, it should be noted that the game has not yet gone live on the eShop, but the Giant Margarita people have already promised a day one patch that’s going to bring the game “up to speed” with the current Steam version. This patch will supposedly improve audio and graphics, add more modifiers (seriously?), allow players to fine tune and select options by group so that they’re more easily categorized, and make it so players can unlock things best through multiple Elimination mode gameplays, which, to be fair, are the bread and butter, most fun mode of the game. I will say I’m a little disappointed: at the current time, there’s a single option under gameplay that just says “Unlock Everything,” and it does, and it’s kind of fun in a Godmode sort of way. I totally get giving players the option to work for what they want to have and to get full access to the game, but I actively encourage Giant Margarita to have the “Unlock Everything” button be accessible through some kind of game code (maybe an old school Konami callback). Also, to please, PLEASE add the option to turn rumble on or off in the settings. I can’t stand having my Joycons rumble on every single movement on the menus, it irks me. 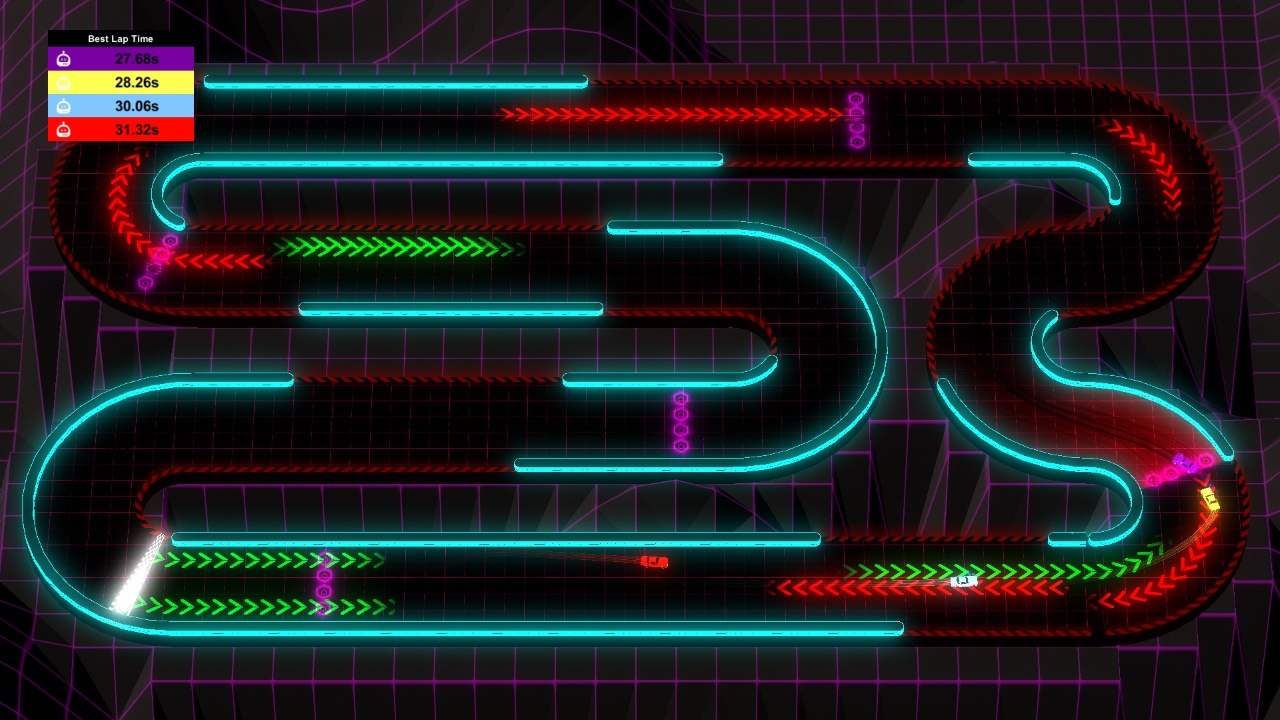 So, into the main game. True to their word, Party Crashers does have a massive number of modifiers, mutators and other goodies to turn on and off within the game. Similar to Mario Kart, there are weapons and items that can be picked up over the course of driving, or assigned to cars prior to the race actually starting. From ranged items like missiles and battling guns to close range damage such as cattle catchers, there’s a surprisingly robust take on combat within. Now, not every single item is necessarily super useful during the different modes (Time Trial cares more about your speed than your destructive abilities), but they all have some purpose and point within the game. Moreover, the ability to randomize things and have certain ones appear and others not is a nice fix.

Party Crashers also continues the neon aesthetic that their golf counterpart brought to the gaming table, and it resonates even better in this type of game. Nothing ever goes full Vaporware/Outrun in design, but there’s some great starkness in colors and shadows that help keep things engaging and exciting. Not to mention that you do have a certain level of customization to your car in a purely visual way, such as colors and “hats” that can be affixed to the car. Most players will want to keep the roof bare, though: putting a crown on top of your car is just asking the other players to “dethrone” you as quickly as possible. I can’t tell if it was psychosomatic or not, but I felt like the AI took stronger aim at me when I was decked out and looked my flashiest in comparison to when I went with a simple red color with no fixings. It might be a conspiracy theory on my part, but I think the AI was jealous that I gave myself nice little bonuses and gave them nothing. 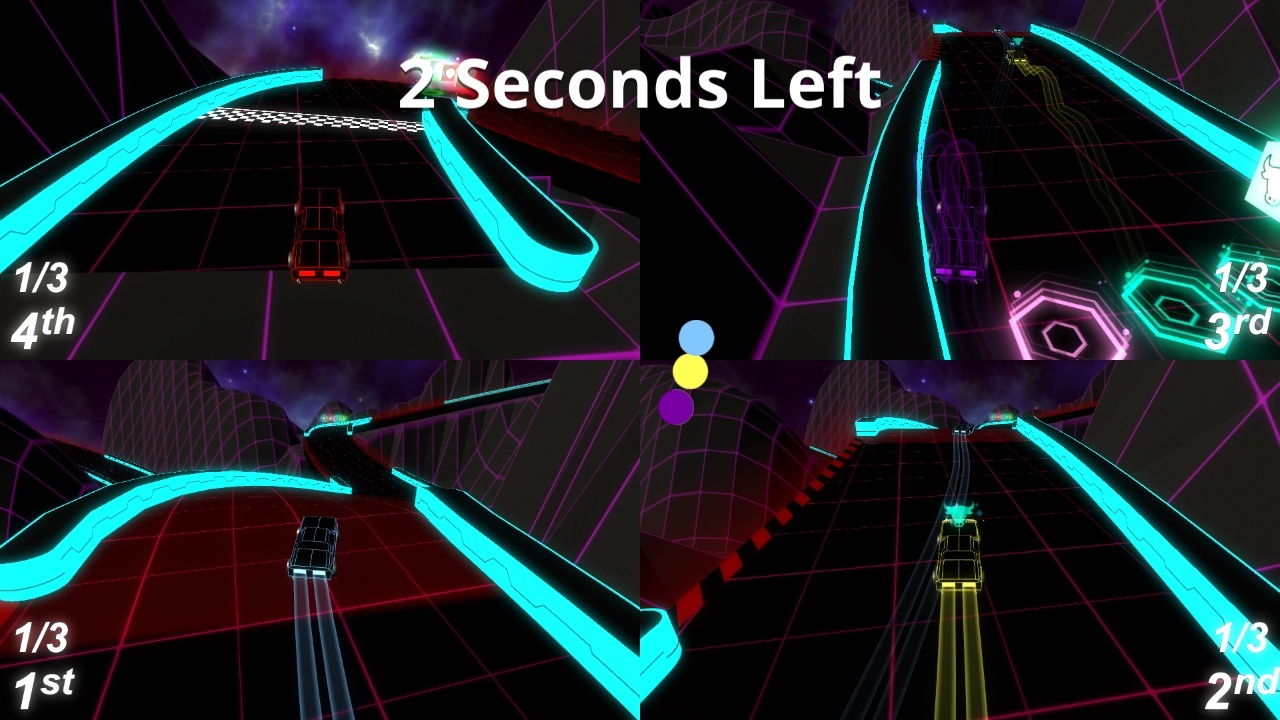 If there’s one thing I’m excited to see from Giant Margarita’s day one patch, it’s going to be improvements to the controls. For whatever reason, I felt like my car simply did not handle as well as I expected it to. Initially, I thought the response was a common factor throughout the game: you know, keep the handling loose to make it more party like and fun. But then I noticed that the AI seemed to have no problems in keeping themselves on the road in spite of different weapons that I tried, including things that actually obstructed the roadways. There came a point where I was able to drop a massive wall behind me that exploded into a bunch of Lego-like fragments across the entire speedway (very cool, seriously liked the idea). It did slow down the driver directly behind me, but, when we came upon the lap again, I noticed they seemed to have zero issues with weaving between the remaining blocks that were scattered about, clipping without any hassle, while I got stuck behind more than a couple and then got swept by the level bar. It could just be that I’m a terrible driver, but I still have my fingers crossed that an update patch will miraculously make me a better player.

The overall effect of Party Crashers is, as best I can say, “alright.” When I played Party Golf, everything just made sense in the approach and the sensation. Letting players all go at the same time, having there be crazy traps, explosive shots, general havoc and a bit of fun-loving “LET’S GO!” kind of mentality to it made it memorable in a positive way. Like people playing a kind of drunk golf where they do a shot, all swing at the same time, and whoever is clearly the most intoxicated gets to drive the kart to the next green. But with Party Crashers, it’s a driving game with a heavy destructive tone: things are already a bit chaotic and fast paced. To then amp that up even further feels oddly forced and kind of out-of-place. I totally get and support the mutations, the modifiers, and the sheer number of courses that were cranked out for the game modes: kudos to that design. I think, however, that the “Party” moniker could have been stripped out and the “hurry up” options removed to make the game feel less pushy. It’s fun, but it’s not filling a niche that needed to be plugged. It could easily do the same without the overbearing mentality.

Still, that last bit is just my own personal take on things. From an executive standpoint, Party Crashers is a lot of fun, has a great deal of variety and replay ability, and works best with multiple players instead of solo with the AI. The music and colors are right on the money, imitating the same sensations that were given from the previous golf game, with some strong implementation of variety and choices, plus the addition of a “quick game” mode to just get you right into the race. If you’re totally committed to the idea, go ahead and grab it at launch and enjoy some slightly long load times but otherwise good handling. If you want to see what this fabled patch brings, maybe hold off, but not for too long: this one is liable to peel out and drive off in a hot second.

Party Crashers has some excellent ideas, and only a few technical missteps put this varied and chaotic racer behind its golfing older brother.