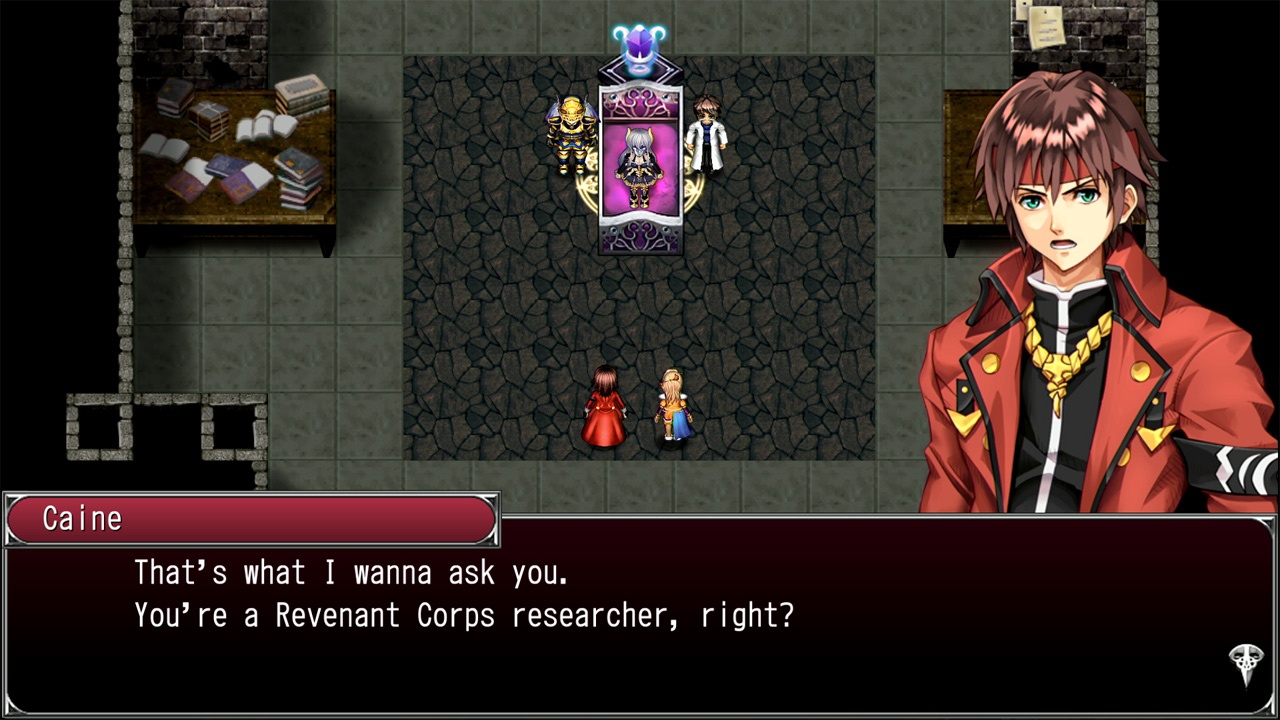 Whether you’re a seasoned gamer, or relatively new to the foray, you’ll no doubt be aware of the nostalgia values of the 8 and 16-bit eras of role-playing games. If so, then you may have probably heard of a game called Revenant Saga, a throwback title that released on the Nintendo Switch last year. Although it follows in a similar style to the golden age of role-players, it also contained a very modern feel in its gameplay; essentially giving us the best of both worlds. Well, now the spiritual successor to Saga, Revenant Dogma is also seeing a release on the Switch. Again, it contains a very old-school feel, yet within its mechanics and gameplay, we have a game that feels very modern indeed.

Developed by EXE-CREATE and published through KEMCO, this game shares many similarities to the original Saga, yet also contains enough differences to make this a game that not only stands out on its own, but is also a title that doesn’t require you to play the first in the series. However, saying that, if you’re a gamer who wants to become invested in the lore of the whole Revenant series, then you may want to experience the first Saga, as it explains the whole premise of the Revenants in a much more meaningful way than this title. If you have already played the first game, then you may be slightly surprised with the differences between the two titles; but play it with an open mind and it presents a beautiful world that opens up before you.

Revenant Dogma takes place in a completely new setting, namely the world of Aldora. Within this world, two races have co-existed for centuries; the humans and lion-like, Therians. Each have their own way of life, their own gods and their own beliefs. However, despite their differences, not just in their societal values but also in their appearance, the two of them have lived harmonious, separate from each others affairs. One day though, the leader of the Therians, Premier Dverg, manages to harness the power of divinity from the feral gods and soon they supersede the humans to become the more superior of the races. Ultimately, this produces an unsettlement amongst the human race, as with a lack of divine intervention from their own gods, they began to question their faiths and beliefs. In an effort to try to restore calm, a priest, Lionel, has come forth to research the divine powers in order to bring balance to the world. In order to help him in his task, the Revenant Corps is founded.

You play as Caine and Julie, two members of the corp who have repeatedly failed in their tasks. However, you join them as they try to redeem themselves as they search within Therian territory for a Feral Relic in order for Lionel to investigate its source and divine power. Before long, your party doubles in size, recruiting the help of Lilith, a mysterious masked girl and a Therian called Fleon. With tensions rising between the humans and the Therian, Caine manages to harness the power of the Feral Relic and uncovers a sinister plot that forces the four unlikely friends to work together in uncovering the truth between the two factions. 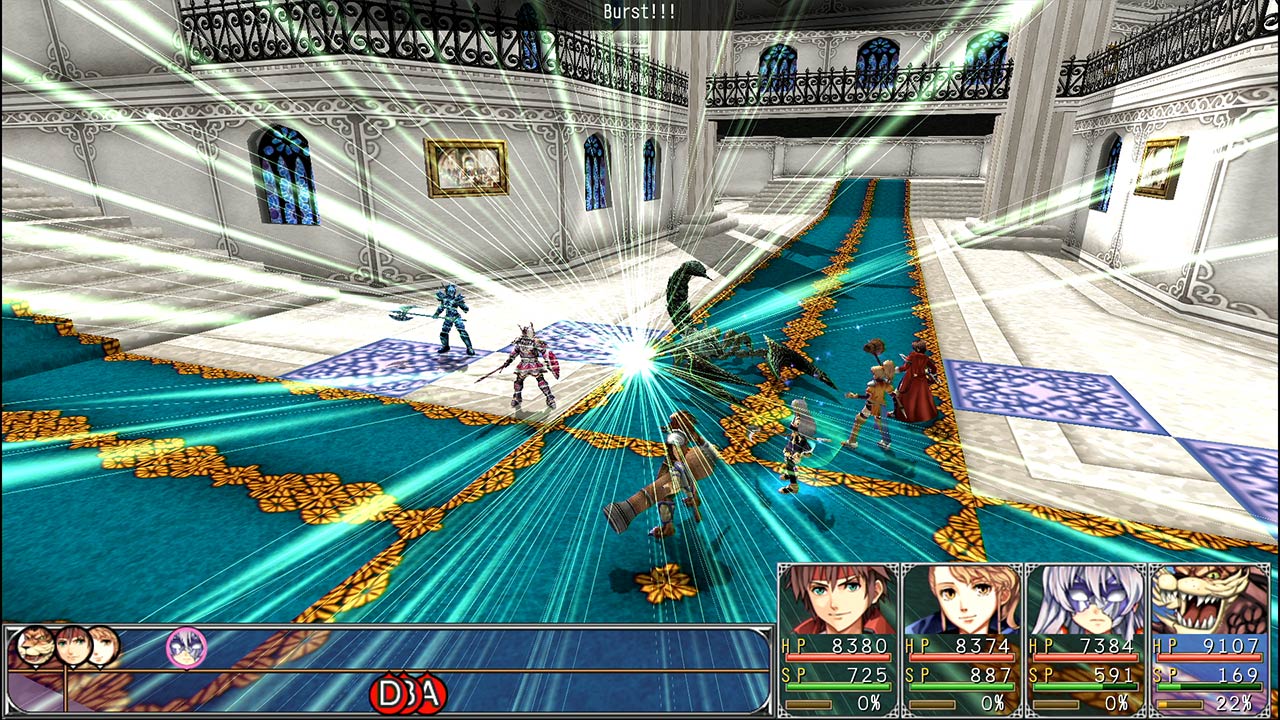 If you’ve ever played a game developed by EXE-CREATE before, then you’ll instantly notice a much darker flavour to the proceedings than their previous titles. However, it still contains its light-hearted humour and character interactions that the series is known for. In fact, despite the face of adversity in what you may have been previously used to, it still retains a familiarity about it. Exploring the world is still presented in a two-dimensional way, harking back to the 8 and 16 bit eras, yet its pixelated forms are now much more succint and everything flows with a smoothness that is only found in modern games. In a similar style to traversing Final Fantasy’s world maps, battles are triggered in a semi-randomness way; although a visual warning does prepare you for the inevitable conflict.

During these battle sequences, the presentation changes again, this time into a more three-dimensional view. Using a turn-based mechanic, you select between characters, as well as abilities and attacks until you or your enemies are slain. However, these skirmishes can happen quite frequently and, particularly at the start of the game, can be quite easy. To combat this, you can set each bout to be automatically determined with the X button; although using this mechanic does take away your choice of attack options, whether you deal damage, heal or transform yourself into a higher deity, such as a knight or guardian. Also, it isn’t really a mechanic that’s going to help you much when you come across the larger varieties of monsters.

It’s important to learn the mechanics of fighting from early on really, as there are a number of varieties that can be utilised within the heat of battles. As mentioned, transformations can take place, making your character infinitely stronger. However, there is also a drawback to using this power, as limited by a gauge, once it reaches one-hundred percent of its power, your character enters a berserk state; making him or her unpredictable. This can be combatted though with the use of specific items that are designed to break the limiter or berserk actions. There are also other abilities, such as bursts, that can be called upon with the A button when its gauge appears; although it needs to be activated before the gauge disappears again.

These bursts allow up to three skills to be utilised, although its mechanic is completely random, meaning you could find yourself with only one or two abilities at your disposal. However, successful activation can also change the tide of any battle. It’s important to take advantage of these abilities, as using the automatic functions also devoids you of collecting certain rewards, such as RDP or Revenant Dogma Points; a special currency that allows you to purchase rare items from the in-game store. Admittedly though, it isn’t a necessity to obtain these rarer artifacts, as the game can be completed without doing so, but then again, why would want to do that anyway? As well as obtaining RDP from successful battles, characters are also awarded experience points, gold coins and useful items. These can range from healing potions, utilised by pressing the L shoulder button at any time, to new weapons and armour. 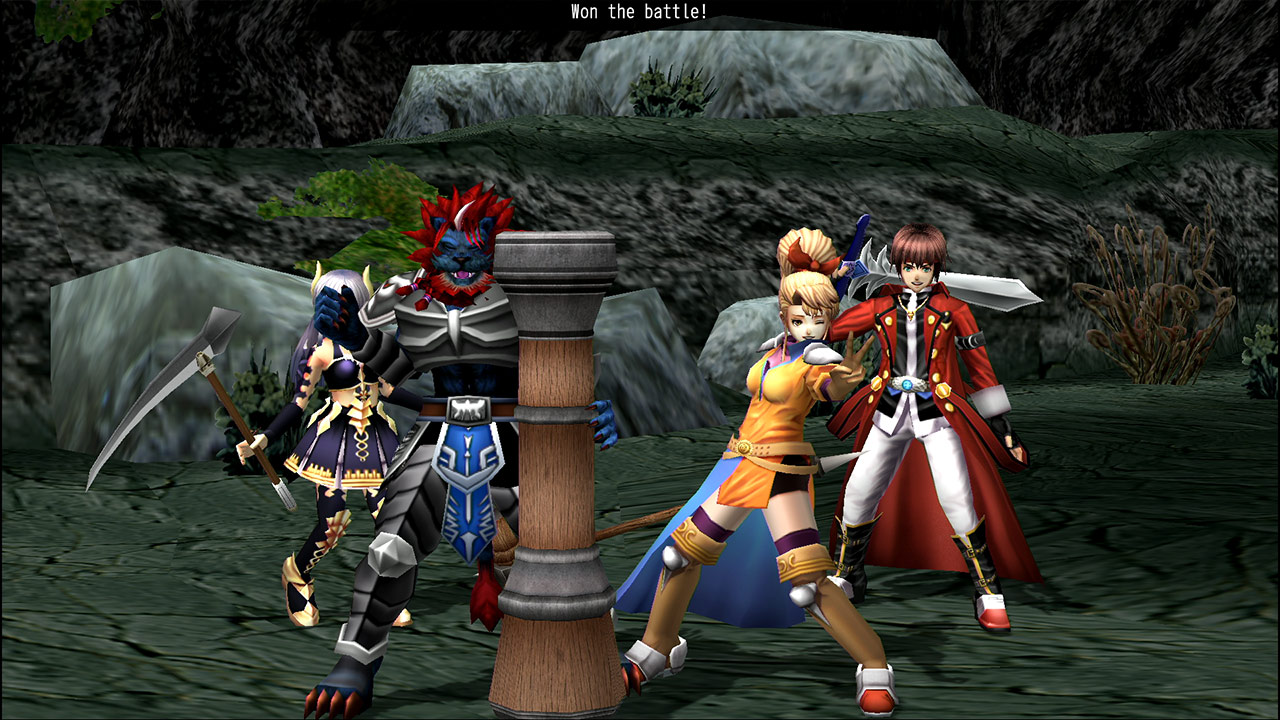 There are also other elements within the levels and the world that offer a means of gaining extra loot. Treasure chests come in two forms; one offering valuable loot, namely the Spirited Chests that change locations within the many dungeons and another, more normal chest that dishes out regular items. As well as these though, the game also contains another world known as Etheral Est. These are essentially a series of four dungeons that range from easy to hard and can be accessed from a series of wormholes that can be found in the towns and villages of Aldora. These dungeons contain a sterner challenge than normal, but with high risks come high rewards, with an array of valuable and powerful items; although only one item can be retrieved at a time, but others can be sent via courier to the overworld awaiting your collection.

These can be equipped by pressing the X button which brings up a menu, allowing you to change loadouts, boost character attributes and save the game at any point; making it an ideal casual title that sits nicely within the portability of the Switch. From here, you can also keep track of your current objectives, whilst pressing the Y button brings up the world map should you find yourself lost in where to go or what to do. To help you further, each location also contains a Warp Sigil which can be used to fast-travel around the world. As well as these, they also contain a number of Restoration Sigils too, allowing you to fully restore yourself and rest; although they can also signal the impending arrival of a boss-fight too.

On average, there is around ten to fifteen hours worth of content here, although if you like the grind and have ambitions of reaching the maximum character levels, then you can easily be looking at fifty plus hours. All in all, for its pricing, there’s a lot of gameplay value here and content to delve into. Overall, Revenant Dogma offers a really nice example of old-school style dungeoning and role-playing, yet contains very modern mechanics which gives it a superb level of depth, as well as a smoothness in its execution. Although the story itself is littered with cheesy content and a lot of it, there is enough here to keep you playing; especially in its capacity as a casual title that will offer hours of entertainment. If you’re looking for a role-playing that harks back to good old days of 8 and 16 bit gaming, then this game offers a good insight to those styles of game and if it’s a concept that you’ve never experienced before, then what are you waiting for; it’s time to don your best armour and sword and revel in the glory that is 2D dungeoning, only this time in the grandeur that is Revenant Dogma.

A dungeon-roaming RPG with a distinctly old-school feel, yet contains enough modernity to bring it bang up to date.