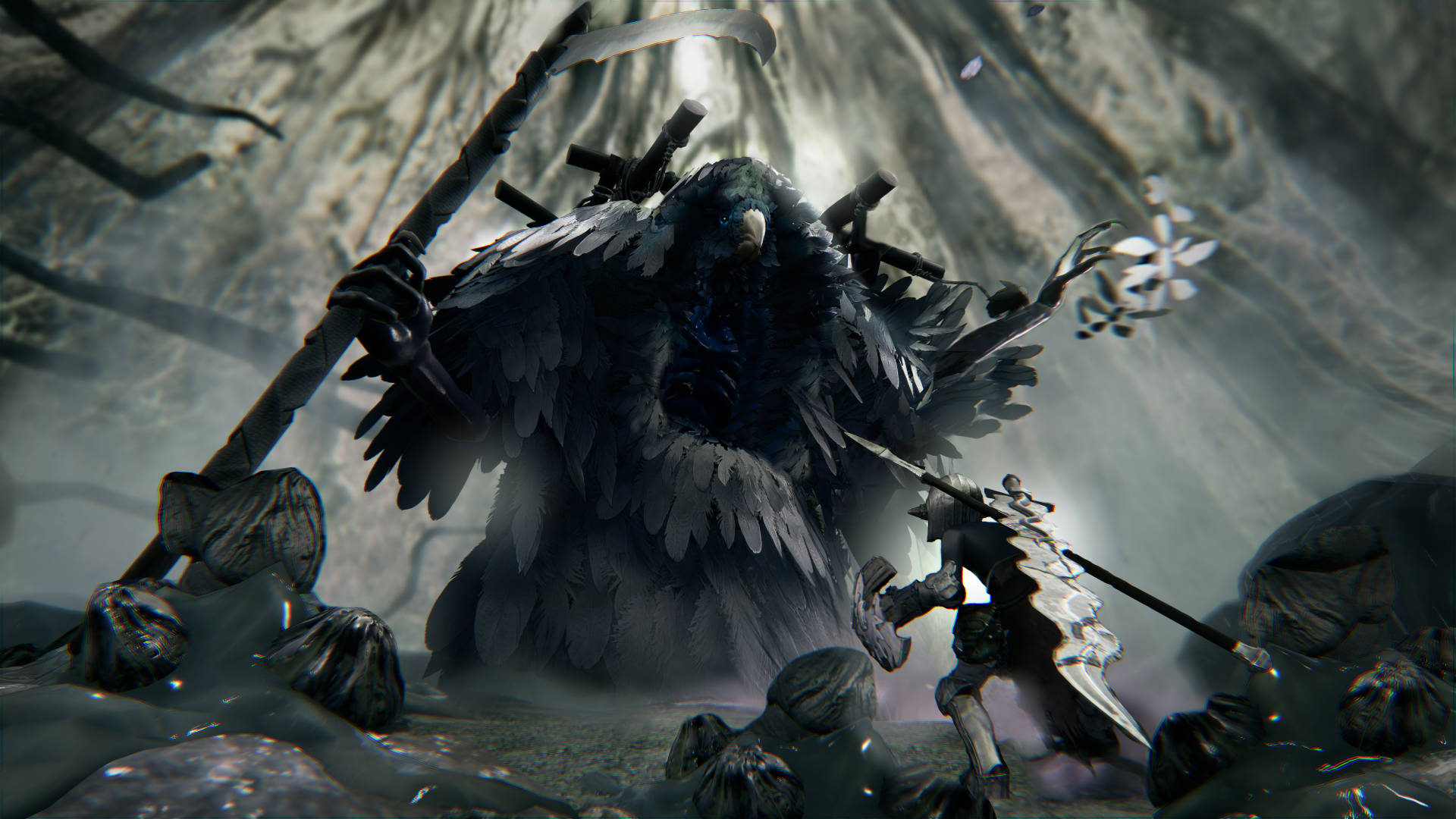 Alright, thanks so much, From Software. If it weren’t for you, I don’t think we would have nearly the number of “Souls” games in the world as there are today. And, don’t get me wrong, I respect the Dark Souls franchise and what the games have meant. They’re tough, they’re brutal, and they reward players who are legitimately good at playing and fast on their reflexes. But, on the other hand, not only have they created a terminology that is used far too liberally in gaming critic circles (It’s the Dark Souls of Solitaire!), it’s also spawned a horde of ridiculously difficult games. Some, like Salt and Sanctuary or Darkest Dungeons, apply the gothic aesthetic and punishing system to a great game framework to make something all their own. Others, however, are thinly veiled tribute games that need to stand on their own two feet. This is the quivering tightrope that must be walked by Sinner: Sacrifice for Redemption.

Sinner, first and foremost, is incredibly confusing in its backstory. From what I can gather, you’re Adam, a dude who’s memory has been wiped and his past a mystery, but that’s what website information is for. You’re a knight (maybe?) from the Kingdom of Cavanis, a one proud and noble land that’s been completely possessed by the seven deadly sins. The sins have found homes in seven former noblemen and women and have corrupted and mutated them to best fit their personas. The avatar of Gluttony is a massive, morbidly obese man who’s very stomach has a mouth to consume. The avatar of Envy is a beautiful woman who literally removes her head to reveal a darker side that shrieks and comes at you with relentless damage. Adam cannot simply enter into the fight against these sins: he must sacrifice a part of his own, pure soul in order to engage them. Though he may damage himself, the greater good – the chance to redeem his home – is the ultimate reward.

Sinner: Sacrifice for Redemption is, at its core, a boss battler with a small bit of RPG influence therein. Your objective is to fight and defeat every one of the sinful avatars, but you cannot do that without giving in a piece of yourself. Entering into the fight with Sloth means you’ll succumb to exhaustion if your stamina bar empties, which is a prime time for the skeletal army he commands to stab the living daylights out of you. Fighting Lust means that your shield might shatter, a rather big deal since parrying is one of the few ways to really keep the battle from going south. If you’re successful, you’ll be able to win back a bit of yourself, but you never really return to being whole.. It’s a pretty novel concept, and it’s mostly executed well in the initial gameplay that’s offered. 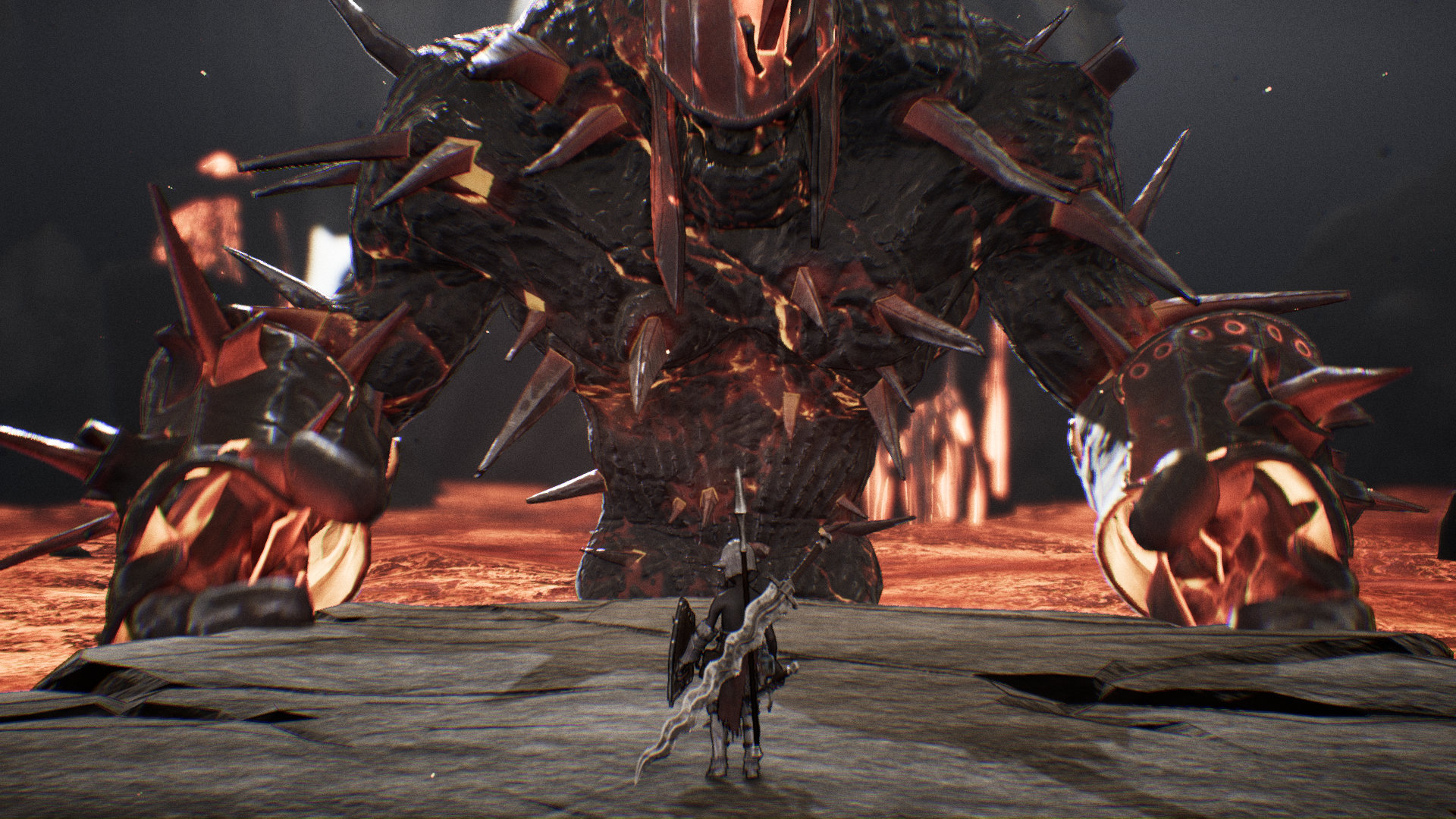 The biggest pull for Sinner is the graphics and design, bar none. Before entering into battle, there’s a great black-and-white cut scene to show how the avatar was perverted into being, and then you get onto the battleground itself. The Avatar of Greed, which presents itself as a massive plague doctor, resides in a desiccated swamp that’s rife with decay and noxious gases. Pride sits atop a throne in a massive Colosseum, ready to prove he is the best and slay you before invisible hosts of fans. Visually, not only is the game stunning, it’s varied: even though there’s a predominantly “dark and gothic” tone throughout, it’s got a satisfying mix of brighter hues for when the time calls for it. Lust is a landscape that’s full of pink tones, but they’re this sickly sort of display, like if Pepto Bismol went bad. It’s impressive for the palette matching to really help set the stage and the atmosphere for each of the fallacies that humanity must face.

Gameplay…alright, this is where it gets a bit sticky. Gameplay is very, very similar to Dark Souls, which means some 3D action where you need to really use the whole room to dodge roll everything and survive. You’ve got your choice of fast or slow weapons (a larger bastard sword that can do some real damage but also swings like a slow-motion bat), some healing items, and, best of all, some long-range weapon items. The long-range stuff is limited but absolutely essential in conquering some of the bosses (some meaning most). As you work your way through the battle, bosses will attempt to beat the hell out of you, and simply rushing in and trying to wail away is a surefire tactic to die instantly. So you need to watch, learn, and develop strategies. Gluttony, for example, needs to be moved around and kept an eye on: he can punch holes through the floor that mean you die instantly, but if he falls in it’s just a minor inconvenience without any damage. Thus you take notes and figure out when it’s time to strike and when it’s time to flee. You learn the attacks that can be parried and set you up for a great counter, and you learn when you just gotta roll on out.

So for players who are bad at Dark Souls or have never played, Sinner: Sacrifice for Redemption is actually a fairly good setup in getting your sea legs on the idea. Since there’s only boss battles (I don’t think the army that Sloth commands counts as just “mobs”), you don’t have to worry about getting rudely murdered by something unimportant on your way to the top. Instead, you can focus all your energy on memorizing the hitboxes of some attacks, where a safe place to stand is for others (you can hide behind Greed when he swings, but you can’t hide behind Pride when he stomps), etc. Therefore, by the time you get the kinks worked out, you feel like a winner and a real champion. Additionally, you never really find a moment where the patterns are too predictable: phase changes aren’t automatically triggered by certain life percentages, but, rather, by the mood of the boss. 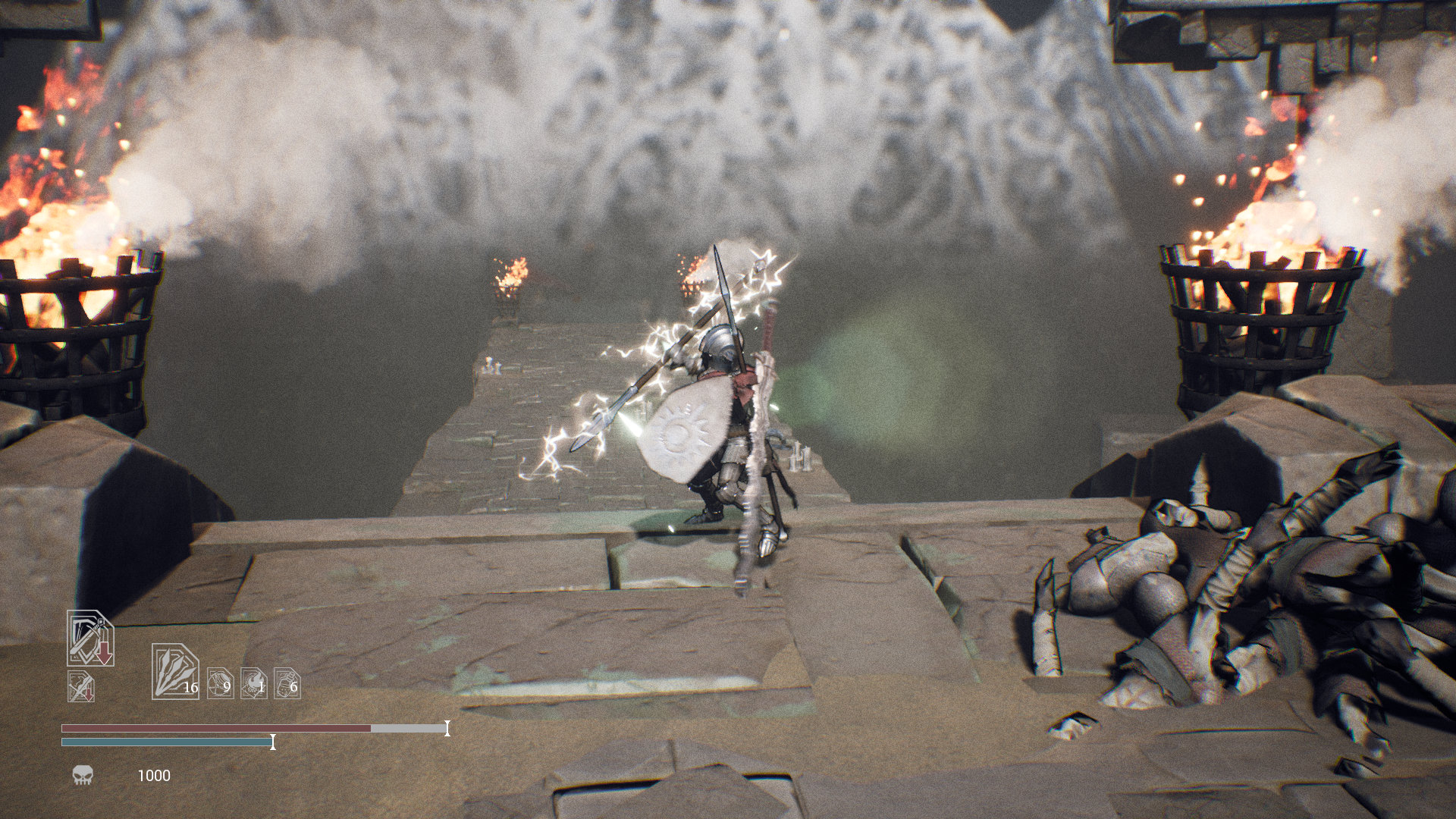 On the other hand, that’s also kind of a stopper for forward movement within the game in the traditional sense. For longtime Souls players, you’ll quickly figure out what you need to do in terms of survival, and then you’ll be able to simply shoulder the pain and deal with it, maybe losing a few lives in the process but, comparatively, it should be a much smaller time investment than Dark Souls. It’s a good thing that there’s additional game modes afterwards to keep players coming back, because, technically speaking, the core game could potentially be over in less than an hour. Once you figure out that keeping locked on to the boss is the key to defeat…well, several of the sins, it’s just a matter of timing and effort.

However, the biggest problem for me is performance. Sinner: Sacrifice for Redemption clocks in at a whopping 11.8GB, and there is nowhere near enough of a variety in weapons, boss fights and character styles to justify that size. The loading time at the beginning seems to take forever, and you really just tromp around the screen at a lethargic pace. Running brings you up to an acceptable speed, but you can only run for a few seconds at a time before the stamina is gone. I appreciate the way that my appearance changes based on choices and sin influence, but things just never really felt as smooth or silky as they could be. By comparison, I looked at the clips of this game when the demo dropped months ago, and that version of Sinner looks positively gorgeous on higher end PCs. I fully understand that there needs to be graphical sacrifice for a game to even run on the Switch, but the umbrage comes in twofold. One, it simply doesn’t feel like it runs well. Two, all the screenshots on Nintendo’s own website are these high-definition, gorgeous shots that you never attain in the main game. With the release date of the game now disappearing from Steam entirely (it looks like it was supposed to be a simultaneous release with the Switch), I’m wondering if a ton of patches are in the future.

Sadly, Sinner: Sacrifice for Redemption is a very cool idea with some mediocre execution and awful timing. Even though it’s half the price, it’ll be dropping within the same week as Dark Souls: Remastered, and that’s a very tough sale to make even with Dark Souls being a redux of a much older game. I think Sinner is going to sit happily on the consoles of a select few players who give it a chance and fall in love with the dark universe of it all, plus the sinning ideas and the chance to challenge themselves in crazy ways. Why not get affected by all the sins and then try fighting from the ground up? It’s not a bad game, and I think it could become a great game. But, at the current time, it isn’t even a proper Sin: it’s just a naughty little thought.

Sinner strives to emulate the best of Dark Souls with it’s own original penalty system, but ends up leaving players stranded on the roadside.