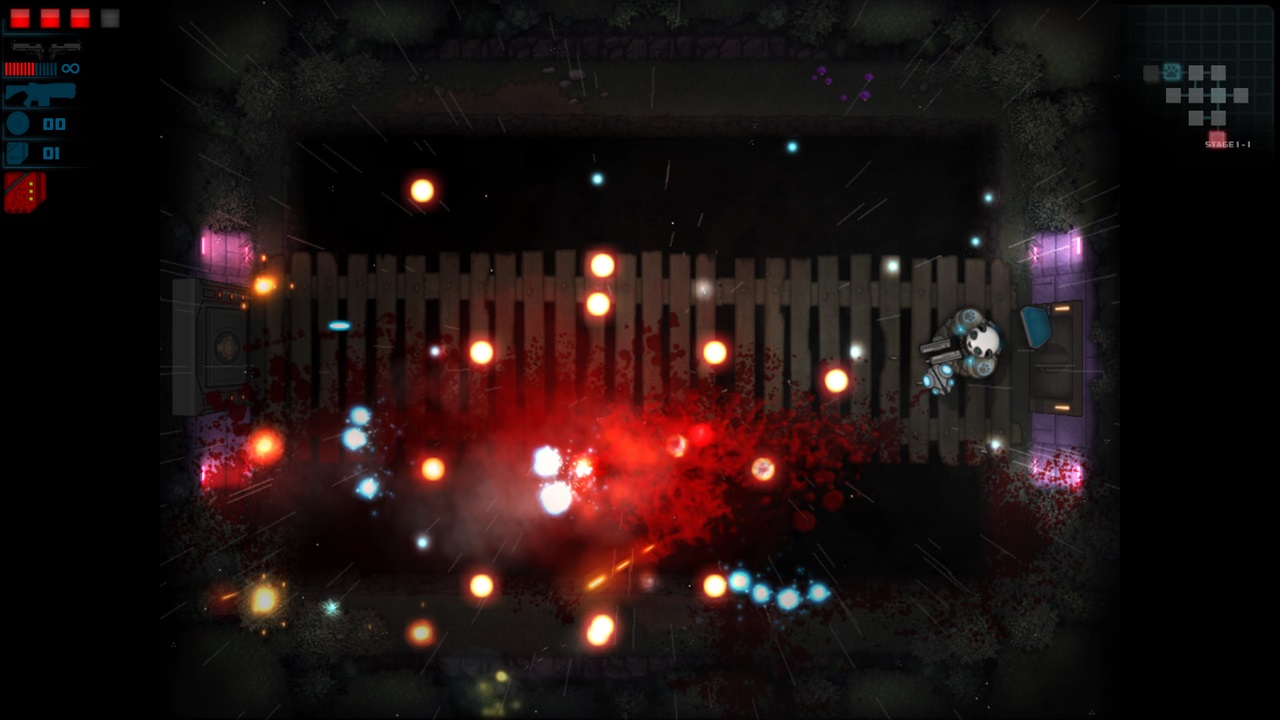 Have you ever stopped to wonder why the twin stick shooter motif is so goddamn popular? It’s a mystery to me, and I’m neck deep in these types of games all day long. From Binding of Isaac to Enter the Gungeon, Neurovoider to Tower 57, I’m actually running out of new titles to try. As a result, when literally anything comes across my desk that has one stick to move and one stick to shoot, I’m completely game. When it’s a game that definitely has a different angle and could potentially keep me coming back for more, then I’m fully in, even if I think the concept is bizarre.

Feral Fury is the post-apocalyptic future as imagined by Scandivania Games, which really tripped me up since you reverse two letters and it’s a country. Humans are long gone thanks to their own warlike nature, and pandas have risen as the dominant species for the planet, because why the hell not. Realizing that the planet is tainted thanks to the oil wars that the humans died in (a little close to home, but okay), the pandas now search the galaxy for new, fresh soil in which to grow bamboo. Naturally, along the way, the planets they find are less-than-excited for conquerors to arrive and take over the land, so the pandas are met with some resistance. But the pandas are not the docile creatures you once knew: they are armed, they are agile, and they are angry. Fear their rolypoly moves, as it gives them natural advantage in dodge rolling. This isn’t a cute trip to the zoo. This is galactic domination, and it begins now.

As I mentioned up top, Feral Fury is a procedurally generated twin stick shooter, asking the player to be one of four characters (three unlockable) as you make your way through five chapters. Each chapter will conclude only when the player has found the red keycard to get through the exit door OR defeated the boss at the end of each chapter. Or survived the strange motorbike challenge that exists between chapters, but I’ll get to that in a moment. Your character will move through and find a whole mess of power ups if they’re playing their cards right. There are additional weapons with unlimited ammo that could be a real game changer if you’re lucky. There are passives that add all sorts of perks, from magnetic pulls on dropped orbs to increased chance to find certain items to even just getting a second chance at life in exchange for dropping the change you have on hand. This is all without the unlockable, passive stuff that you can get at the orb shop from the very beginning of each run. Oh, orbs are the weird pseudo currency that enemies drop when you blow them to hell. Just thought I’d throw that out there. 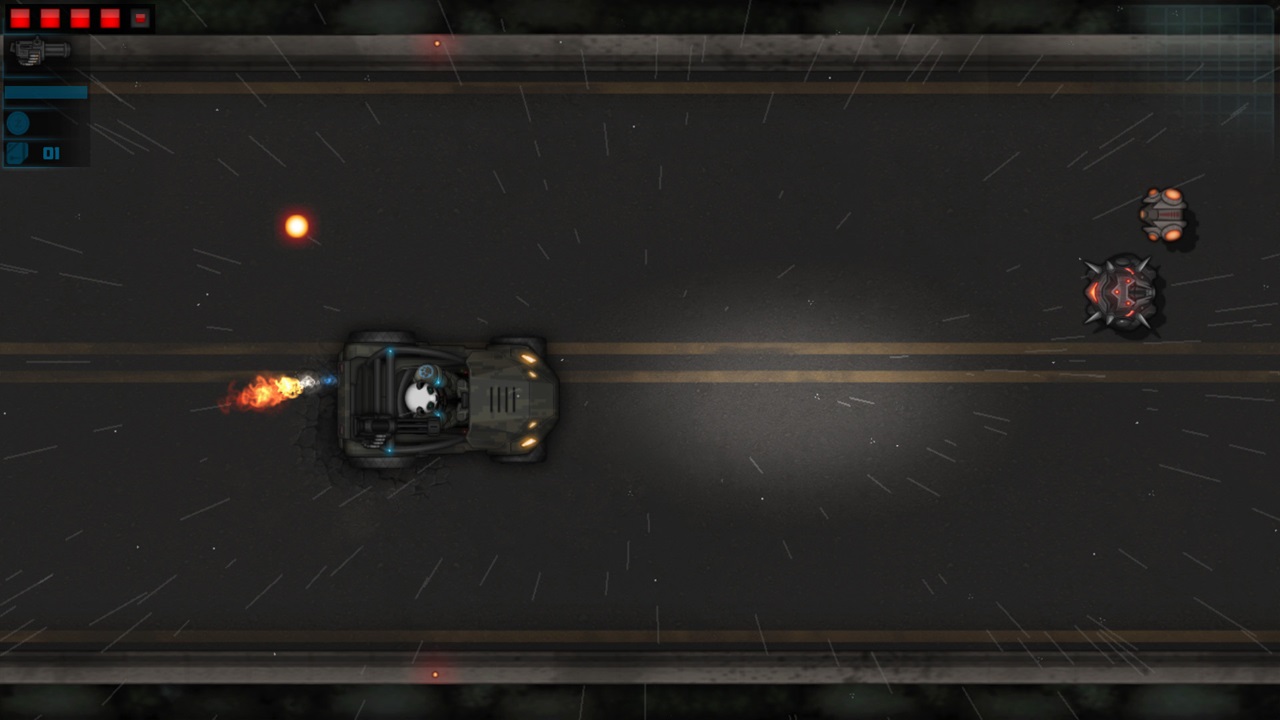 Firstly, because people will mention it, yes, the graphics are pretty unrefined in comparison to several of the games that I’ve mentioned above. Feral Fury is pretty dark in terms of shadows and tones, there’s a whole lot of reds on steel, and nothing really jumps out at me as abjectly beautiful or wonderous. There’s a big part of me that almost didn’t want to mention it, merely because the graphics are probably the most forgettable and forsaken part of the game. Even the bosses, which should be a big deal because they’re so large, are kind of “ho hum” in terms of grabbing your attention. You’ll see a small variety of anthropomorphic pig men, each one a bit different and representative of the planet you’re invading, but none are as cool as the warthog warlocks that you encounter right at the start. Seriously, those things are awesome and a brilliant design overall. I do like that your character’s appearance changes with certain things that they pick up, such as actually wearing the helmet that I discovered on my 17th run, or a big of a dynamic change when I switched from my classic rifle to the uzi or the fusion gun that I grabbed. Still, looks aren’t everything: gameplay is, and we’ve got it in spades here.

What makes a truly great procedurally generated shooter is the potential for literally anything to happen, no matter how unfair it might be. So when I walked into a dungeon and the red key card was in THE VERY FIRST ROOM and the exit was IMMEDIATELY TO MY RIGHT, I knew things were going to be okay. Over the course of several of my runs, I encountered any number of crazy combination of items, rooms, objects and more. I ended up terrifically overpowered, and then exploded when I dodge rolled straight into a giant blue mine. I ran for about three stages without even needing to shoot because the rooms lined up perfectly and I never saw a bad guy till I hit the boss. I was on death’s door, and then found a room that I thought was a heal room…but it took away one bar of HP in exchange for a stat boost. Yay? There’s really good mixing for each of the stages, and none of them appear to be repetitive with the exception of the boss fight floors and the “transitional” stages. There doesn’t appear to really be any variety when you’re cruising along in your pandamobile, shooting bikers and trying to survive long enough to get to the next territory. 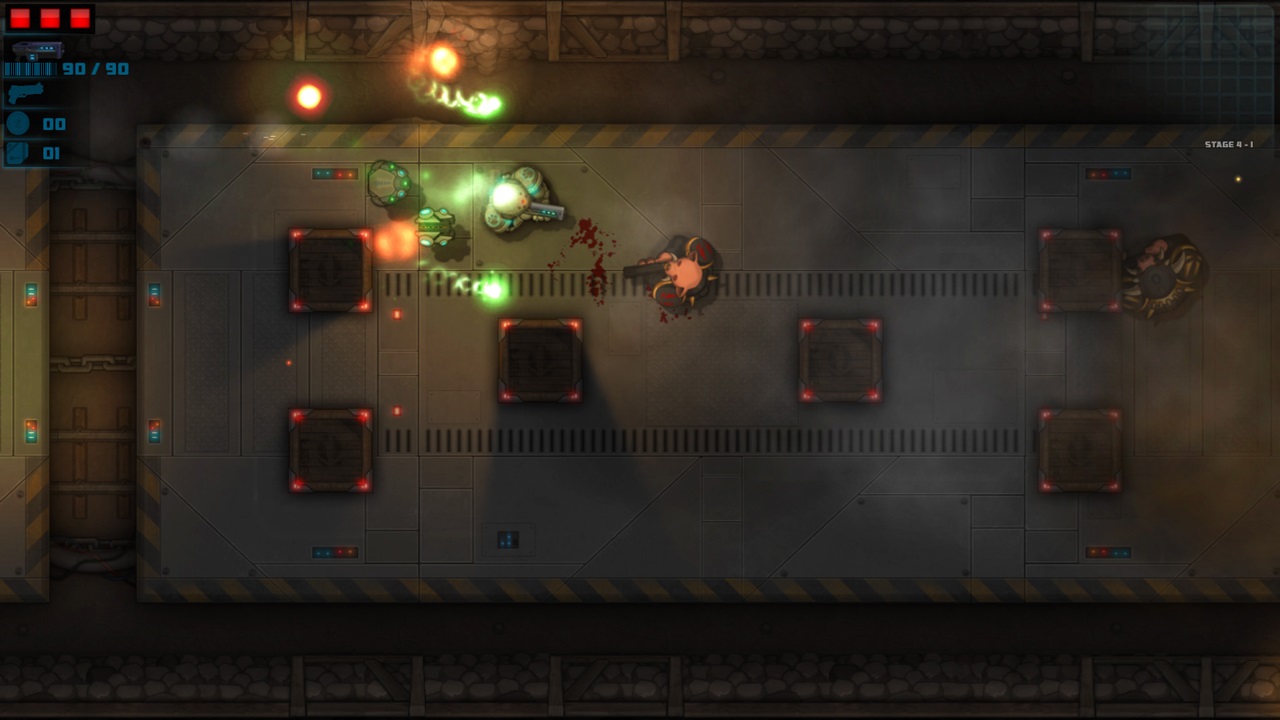 Control wise, Feral Fury is mostly pretty tight. You autofire whichever way you aim, you have a good amount of mobility and 360 aiming, and you dodge roll for a variety of reasons. Sometimes it gets you out of harm’s way, sometimes it opens boxes, sometimes it triggers spikes to hurt other baddies. On occasion, you’ll find a powerup that turns your dodge roll into a weapon, and then things get interesting. The dodge roll makes sense with three of the four characters that you can unlock and is your absolute, undisputed best friend. If you don’t get in good with being able to dodge roll, you won’t survive for a damn minute. You build up your orbs, you get some of those passive boosts that make your dodge roll longer and faster (after you get the passive speed boosts) and you roll your way right to victory like a vindictive Katamari. Hell, just keep running like crazy on all the levels until you have enough orbs to unlock a ton of passives. I got the Talisman as soon as possible because it looked so shiny and interesting, and I still have no idea what it does, but I feel affirmed in my purchase.

Oh, and you simply need to do at least one run on easy. Usually, when the game hyperbolizes the “easy” mode, it’s all text and just a lower difficulty window. But when Feral Fury promises “butterflies and birthday parties,” they’re deadly serious, and it’s hilarious. Enemies explode into colorful swarms of butterflies that take me back to my childhood days, and the bosses are, legit, replaced with a couple of scared pigs. You slaughter the piggies, you take the “presents” (powerups) and leave. It’s so crazily easy that it should be insulting, but it’s just damn funny. If you want to get some orbs fast and don’t feel like doing much else, take the low road here. The hard mode, on the other hand, won’t come around till you finish normal, and it’s a damn nightmare of a trip, so don’t say they don’t mean what they print: Skandivania Games means business.

Overall, I had such a fun time with Feral Fury, and I sincerely hope this isn’t the last I hear of this game. Though it may not have as expansive of an item collection as other twin sticks, it’s fun, it’s fast, it plays well and it entertained me thoroughly. At only two dollars more than the Steam full price, it’s positively worth the purchase if you have any love for twin sticks. The only thing I’ll say is to either play with a 3rd party controller or turn off the rumble: it’s simply too intense and I could hear the buzzing over my headphones. Otherwise, strap in and join the panda army: you’ll do your planet proud.

The first time that I’ve kicked ass as a panda since that Ranma 1/2 fighter from the SNES. Ah, memories.