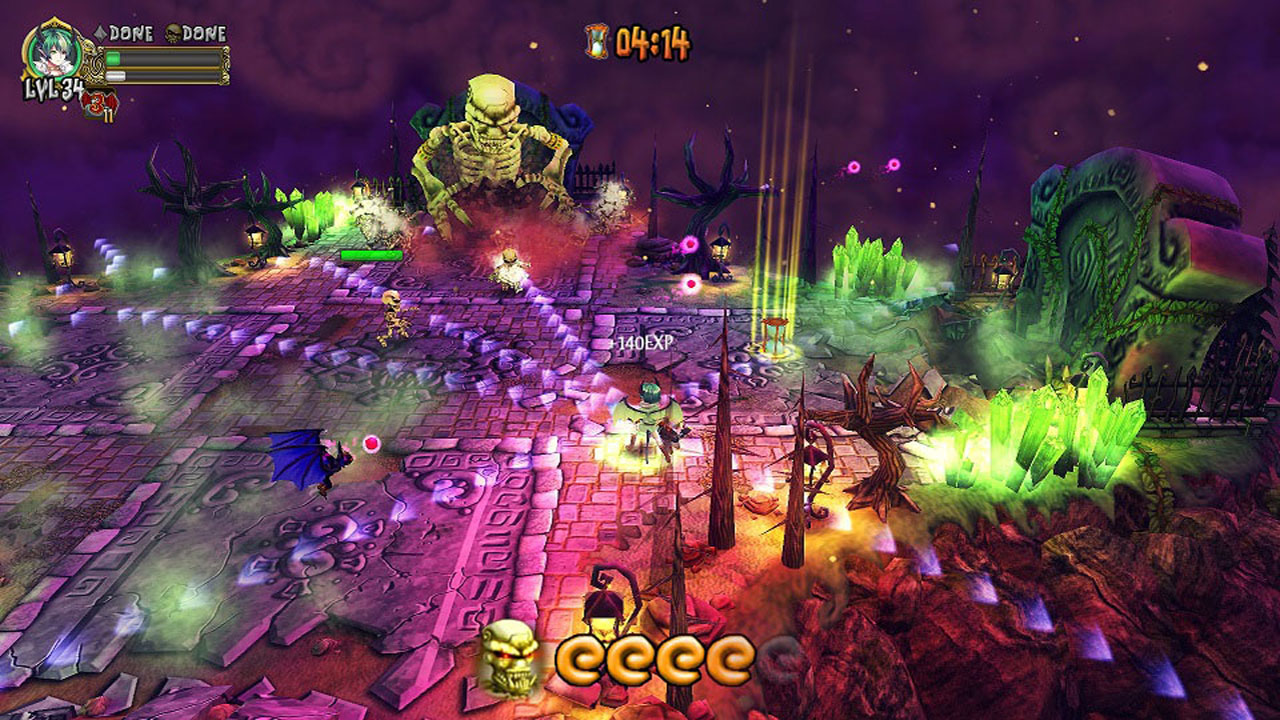 Twin stick shooting has almost completely given up the ghost in being associated with the roguelike genre. Outside of last year’s Tesla Vs. Lovecraft, most of the top down shooting games that I’ve been enjoying have had a roguelike element to it, and that’s been alright for the most part. However, I think about some of the older shooters that really got me into the genre, including a little title on the iPhone called Age of Zombies. That reminded me that, on occasion, wave shooters were freaking awesome, especially when it involved being nimble on your toes (thumbs?) and making the most of things. Which is probably why I had a great deal of interest when Demon’s Crystals came across my path, and, truth be told, it’s one of the better little games that I’ve found.

Demon’s Crystals is a game that focuses around a group of being known as the Uricans. They’re demonic humanoids, complete with wings and horns, but they mostly hang out and act chill. One day, these three beings from another dimension or world or something show up and INSTANTLY turn every single living thing that isn’t an Urican into an aggressive and violent beast. Naturally, as top of the food chain, it’s up to the Uricans to help re-establish order and deal with the invading forces that have upset the natural balance of things. Good news, everyone: it’s chow time, and our demon friends are hungry.

Demon’s Crystals presents as a one to four player twin stick arcade shooter, in which you and friends must survive different waves of enemies in order to meet objectives and move onto the next level. Levels will have multiple “wave stages” in which you have to accomplish different things. Sometimes you’ll need to pick up a certain number of crystals before you can move on, sometimes you need to kill enough enemies, and, on occasion, you’ll have to do both. Be successful and you get to see what the next world brings. Fail, and you can continue from the beginning of the stage. Along the way, you’ll pick up a variety of things. Firstly, EXP will help level you up, which I think makes you do more damage to the enemies. Also, you’ll find temporary weapons and power ups that make you infinitely stronger, safer, faster, and basically a better Urican. If you see a power up, you’ll want to get it, but be careful: some will cancel out others and potentially ruin your awesomeness. 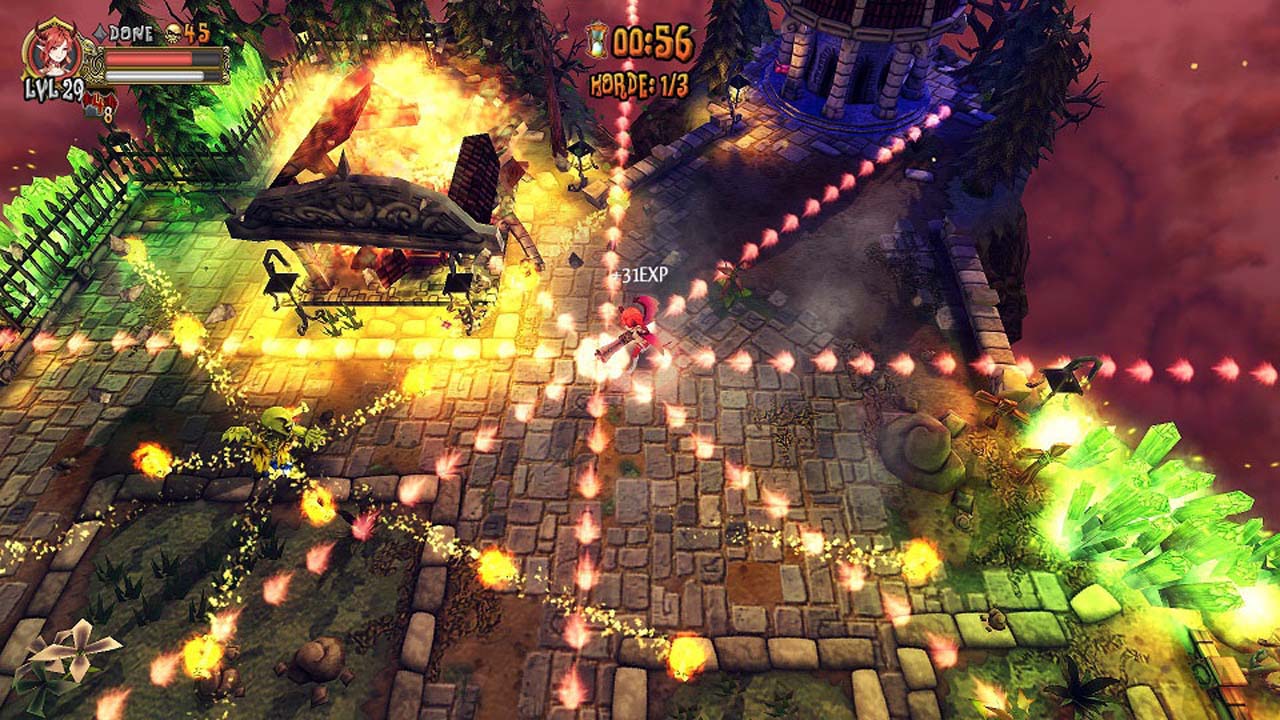 Aesthetically, I’d say Demon’s Crystals is right on the money in terms of colors, character and stage design, and some pretty decent 3D animation. I’ve never heard of Byte4Games before, but I know of BadLand Publishing (bringing us things like Vostok, Heart&Slash and Anima) and I trust them to pick some interesting titles that grab at you in good ways. Even though the Uricans that you can choose from are identical in power, I think there’s enough variety in their appearance and the way they interact on-screen to make it worthwhile for players who develop affinities/dependencies on getting to choose their favorite color. Additionally, despite everything having a distinctly “Halloween but serious” vibe to it (skeletons that spit fire, massive gravediggers, cloaked wizards), the presentation keeps you fully onboard for what comes with each wave. The only thing I didn’t care for, ironically, was the way the crystals were made: the white gleam they had felt a bit too artificial in contrast to the rest of the game.

The power ups, I have to say, were a very solid variety and gave me a surprising amount of choice in performance and tactics. Besides the standard gun(?) that you start with, you can end up with a three-pronged attack, a piercing multi-directional, something that looked like it shot in eight directions at once, and so many more. I ended up with a freeze ray at one point, which was awesome because I was on a gem-getting wave and couldn’t care less about kill counts. When I got the blue mushroom that turned me into a stompy giant, I grinned with glee as zombies and mutants fled in terror from my massive demon feet. There was one gun that seemed to shoot a tornado of bullets which was…ok. It wasn’t great. Nine times out of ten, however, I was able to stay alive long enough to get to the powerup I wanted and turn the tides of battle, regardless of how frantic things got.

And things really did get pretty frantic after the first level. Demon’s Crystals isn’t a punishing title (though the adjustable difficulty level does help), but it certainly doesn’t take it easy on you at all. Enemies can shoot projectiles from the other end of the screen and, if nothing else impedes their trajectory, they can still hit you. Random zombie arms reach out from the ground to try to rip out your HP, and you’ll forget about them as you’re fleeing until they’ve torn a chunk out of your leg. The first “boss” fight that you have in level four or five (I can’t remember which) was actually really challenging, as the three menacing figures have a good amount of firepower, tons of HP, and will not relent for even a second. Being able to keep it together to clean house and get things done takes a lot of concentration, but it’s not impossible in a solo  mode. However, I will say that the game is much more fun with a second player to help ease the burden. Hell, I’m very curious how fun it’d be with four players, but my kids just aren’t that great at two-handed aiming just yet. 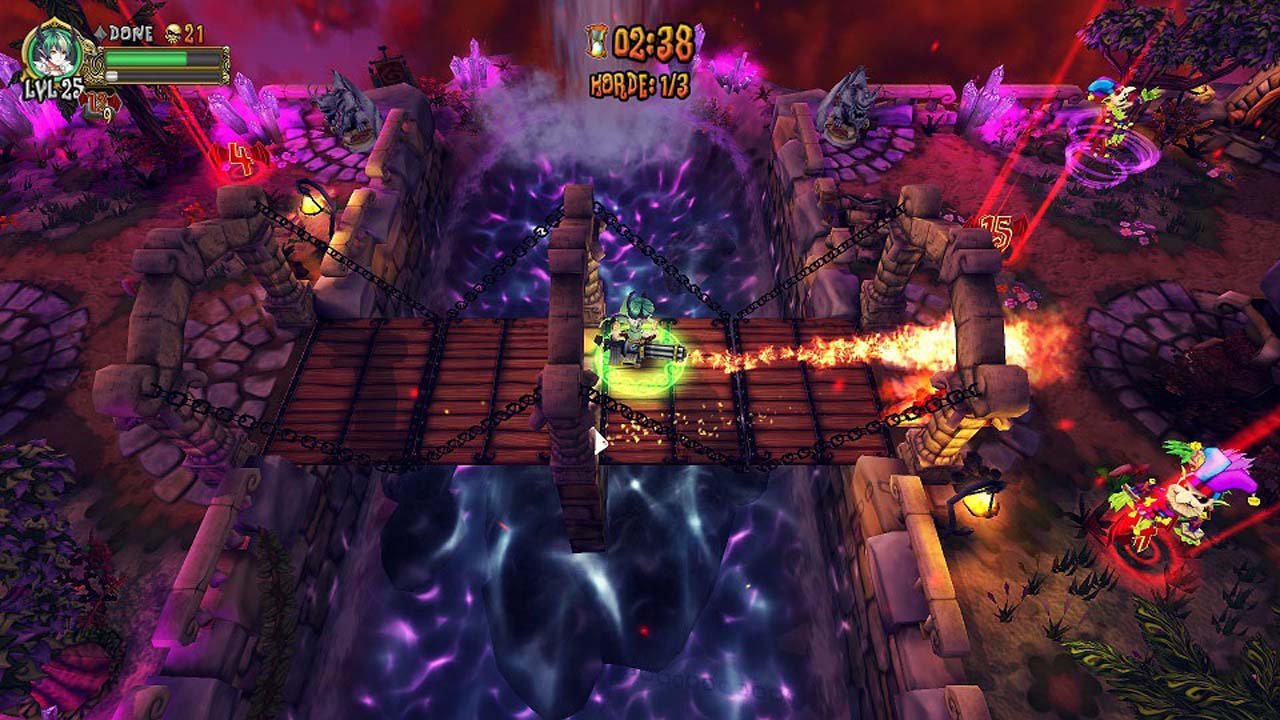 If you make it through the arcade mode, definitely give yourself a chance to try Demon’s Crystals survival mode, which made me think so much of Crimsonland that I ended up reinstalling the game afterwards. Watching your level climb, your damage counter max, and still feeling the stressful pressure to survive just another second till a new powerup arrives was exhilarating. The only downside to survival mode is that you can’t keep blowing up new buildings, something that I found in arcade mode by accident and was simply delighted by. Destructive surroundings are always fun, and getting EXP for it was even better.

The most surprising thing about Demon’s Crystals is how little this game has garnered any sort of attention. I guess it’s a bit repetitive, but it’s fun and challenging and has its own charm about it. The story is bland and wishywashy in terms of actually giving reasoning for what the hell is happening or why things are the way they are, but it’s a wave style shooting game: I don’t always need the complex lore in order to enjoy launching huge missiles at running skeletons. I like fun games, this is fun, and it’s fun with other people. Welcome to the Switch, Demon’s Crystals, I hope you enjoy your stay.

For a change of pace, these demons are wielding the guns and missiles, and kicking ass in their own shooting range.