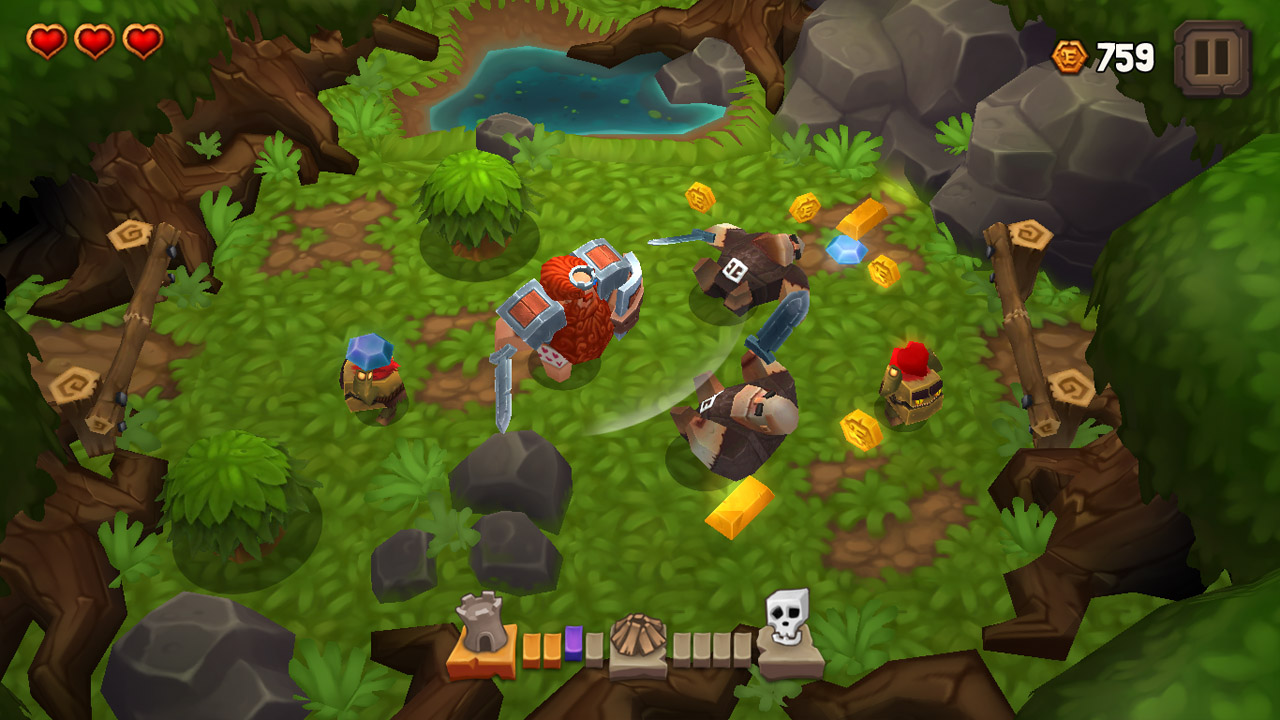 There’s this supposition that a good game on a phone would be an even better game on a device, and, sadly, that’s straight up not true. What makes phone games great (or at least used to) was the fact that they were limited, entertaining, and perfect for picking up and playing before putting them down. Angry Birds, the granddaddy of “we can make a ton of cash through mobile games,” has since been ported to things like XBox and Steam, and I couldn’t want to play them less. Seriously, the thought of purposely using my mouse to drag out angles and fling birds instead of playing literally anything else sounds dreadful. Still, consoles and PCs are where the money is at: selling a game for 99 cents on Android or iPhone isn’t just the norm, it’s expected, and a huge number of people out there won’t bite on a title unless it’s as low as possible without being dead. 10Tons Ltd. has decided to get the machine up and running again, and they step back from some of their bigger titles to quietly release their mobile darling, Trouserheart, to the Switch. And the effect is…alright.

Trouserheart is the oddball, funny story about a king who has his pants stolen by a gremlin as he sleeps on the throne. Apparently owning exactly one pair of pants, he sets out in his trademark heart-patterned boxer shorts to get them back. Along the way, it becomes evident that his pants have travelled quite far, and he’ll have to brave several worlds worth of pants-related puns and oddly aggressive bad guys in order to get back his favorite (and possibly only) bottom covering. But he didn’t just head out in his skivvies: the dude has a sword, a shield, some armor and his crown. Just no pants.

Concept aside, Trouserheart is a simple little hack-n-slash adventure with some upgrades and a bit of versatility therein. You literally have one button: swing the sword. You move around, and stuff is there, and you swing your sword at it. Three of the four buttons on your controller are “swing the sword,” with the fourth being an options menu to change some details here and there. As you move along throughout the levels, the enemies (and there’s a fair variety there) will drop different denominations of gold, which can then be used to upgrade your king in different ways. Max out your hearts, buff your defence, sharpen your sword or get a bigger crown (which makes gold drops more valuable). Create the kind of king you want to be, except for you can’t give him pants. If you could just buy more (which I feel like should have been an option at some point), then the adventure is over and why even play. 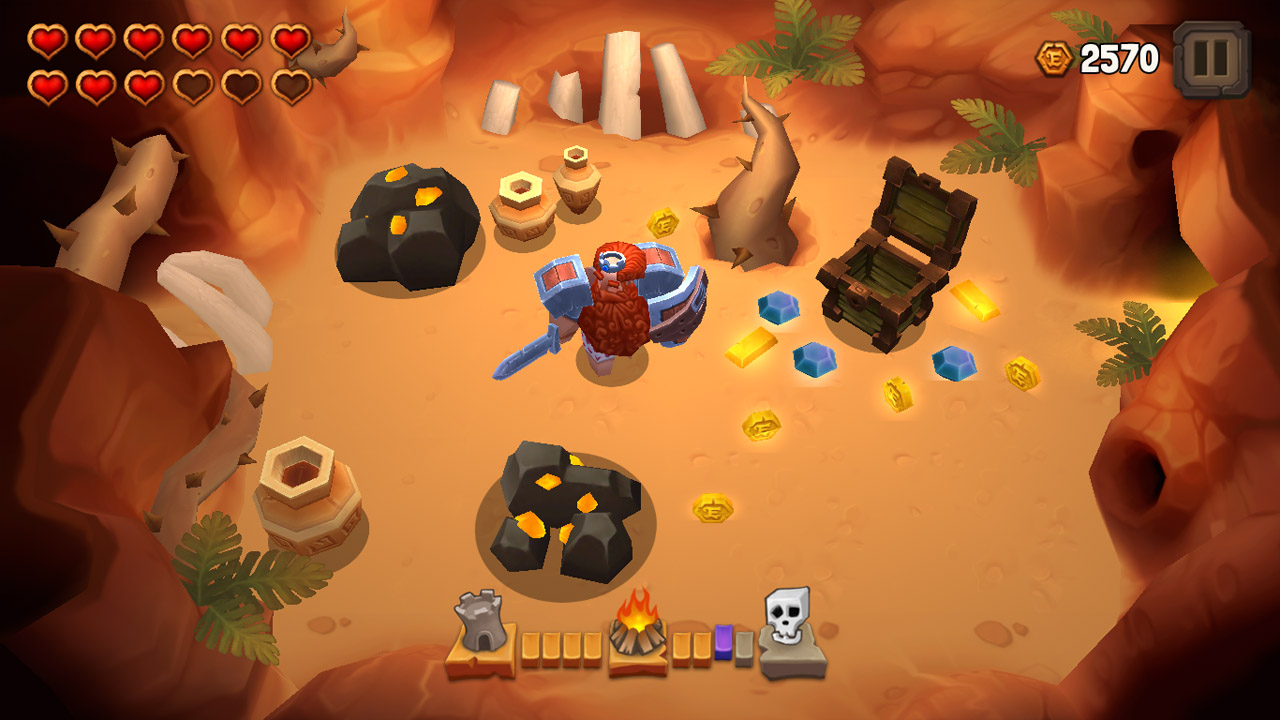 Difficulty wise, Trouserheart is a wild pendulum of “lazily easy” and “oh no.” Especially in the first couple of levels, the concept of this game being hard in any way seems laughable. The enemies all move fairly slowly and can only really “attack” the way that they’re facing. You hit them with the sword a couple of times and they fall down. These annoying gremlins (which are obviously related to the one which stole your trousers) will steal things off of you, including your shield, your crown and your health (plus your cash). But they never take your sword, and every single drop has an unlimited life on the floor. Nothing will disappear if you’re slow on the uptake, so don’t stress about grabbing things as fast as possible. When you work your way through a level, you’ll go through multiple rooms, including a campsite that acts as a midway point and also gives you free hearts to recharge your health. There isn’t anything that screams “crushing” at you out the gate, or even midway down the track.

However, once you get into the second world, the game does start throwing curveballs at you. Sometimes gremlins will have bombs and be ready to rum at you, allowing explosives to be in your proximity even after they die. Tentacles hide under the ground to spring up and lash at you. Stone golem-like grunts take many hits to fall and punch you like a truck. Then we finally get mages which fling fireballs in multiple directions, getting you to move and evade attacks like it’s worth your skin. If you die on normal mode, you’ll thankfully respawn at the last campsite OR the beginning of the stage (if you didn’t reach the campsite) with no cash lost whatsoever. There is a perma-death mode you can toggle if you’re feeling saucy, but I didn’t see the need to purposely put myself out like that. Still, knowing the option is there does make for more versatility for players looking to raise the bar. 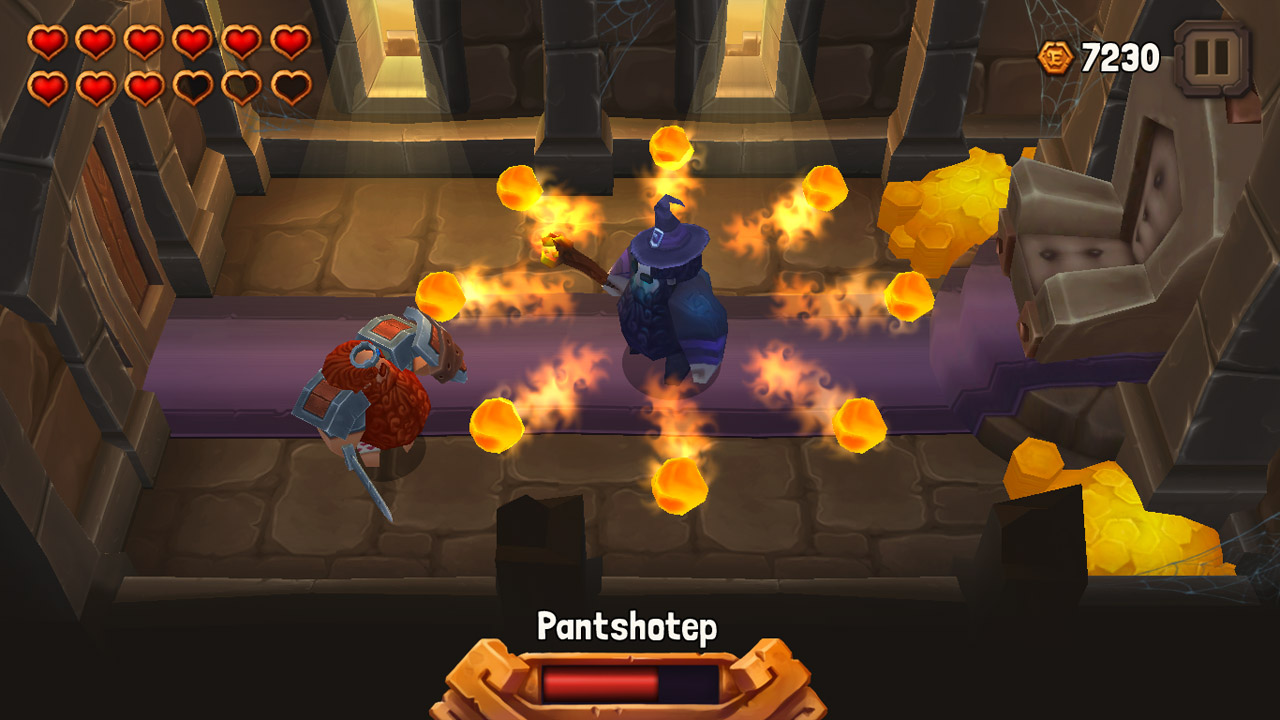 Upgrading is a fun if simple mechanic, with the price of things scaling accordingly as you grow more powerful in the different regions. I recommend dumping as much gold as possible into making the sword hit harder, because there’s nothing to increase agility and you don’t need to worry about health if you don’t get hit. The bosses do get more interesting and complex after the first ones, including some that like to bamf around the board, that drop massive rocks from the sky, and, my personal favorite, a flaming gelatinous cube that will consume smaller enemies to regain health. That’s some dark DnD level design, and it was really cool to see in this game. I think it was easy to dismiss certain elements because of the silly nature of the game and the mobile port of origin, but there’s a lot of thought that went into making enough variety in enemies, difficulty in advancement and choices to make the game harder for the crowds that wanted it.

Graphics and sound are cute and nice enough, but nothing that really sticks out to me as something completely memorable. In fact, a lot of Trouserheart’s characters and shaping reminded me of Pokemon Quest, if not quite as blocky. You can clearly see what the devs were going for in the creation of things, but, again, nothing is one note or consistently the same. Hell, I give a lot of credit to the fact that each of the worlds were sufficiently different, and the bosses all had their own style (including the weird undead boss I think was called Trouserhotep?). It’s fun, and sometimes that’s all a game needs to be.

Players for the Switch are currently chomping at the bit for the next big release, and they’ll be happy to know there’s some massive stuff coming down the pipeline. But that doesn’t mean the little stuff needs to be overlooked right now, and not every game has been played by every person every time. Trouserheart has personality, some decent replay potential, and incentives to try, try again. Buffing up the little king to the point where I can fell most enemies in a single sword swipe was satisfying alone, and then to go back to earlier stages just to stomp and gather gold fast was kind of find. The price is right, the concept is neat, and I think it’s a fun, if simple, adventure overall.

Trouserheart: because you CAN get out of bed and do great things without pants.