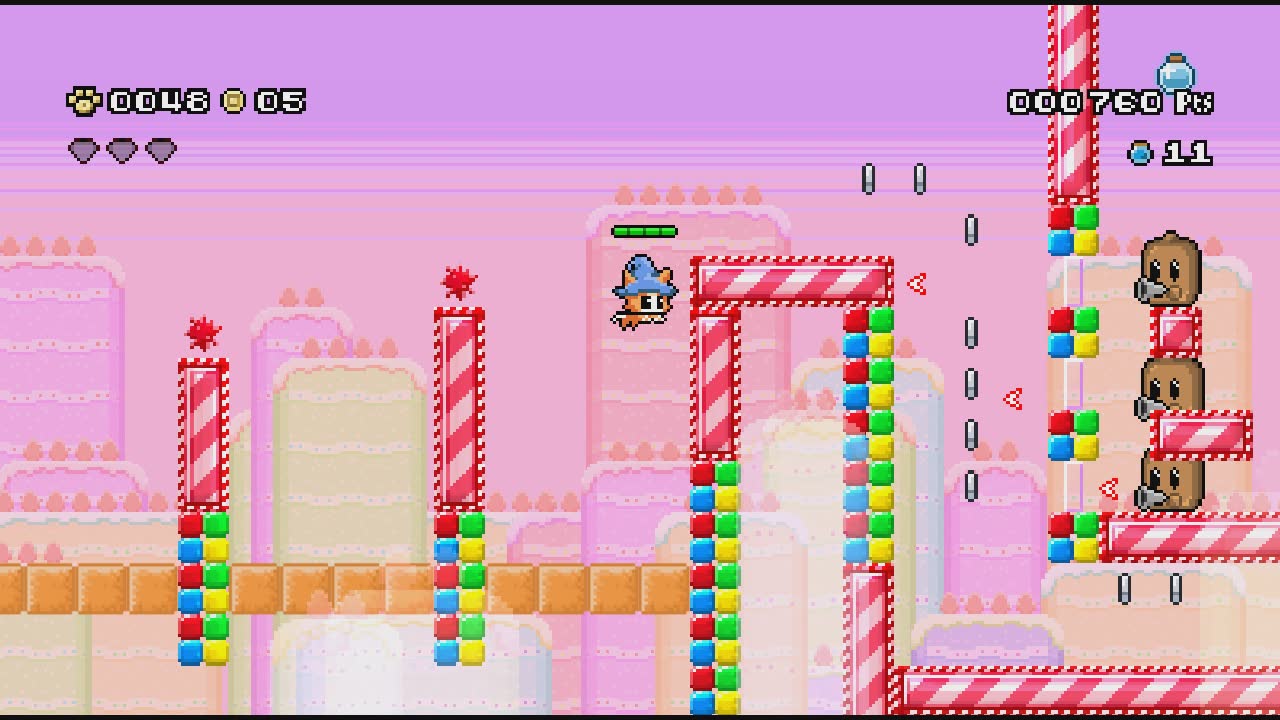 Mix a cat with a mages hat and what do you get? MagiCat! In this 2D Indie platformer you control a little adorable cat who’s on a mission to retrieve a stolen artefact, and with 63 different levels spread across 7 worlds what a mission this will be. I’ll be honest, the story wasn’t exactly easy to follow, mainly because your character is a cat and can only say ‘Meow’ but are we really playing a 2D platformer for its story? No!

MagiCat is a very nostalgic game, it took me back to the days of playing Mario in my pyjamas when I was a kid, the style is very similar. But at the same time it’s completely different. Trying to make your way through each level, collecting as many coins as you can and avoiding, or stomping on, different enemies rings a bell. But, instead of a plumber you’re a cat! A MagiCat! No really, your cat has some sort of magic attack.. it’s almost like a fiery projectile that fires at an angle rather than straight… and he can also dash, but I often forgot to use this, just like I always forget to block in fighting games. 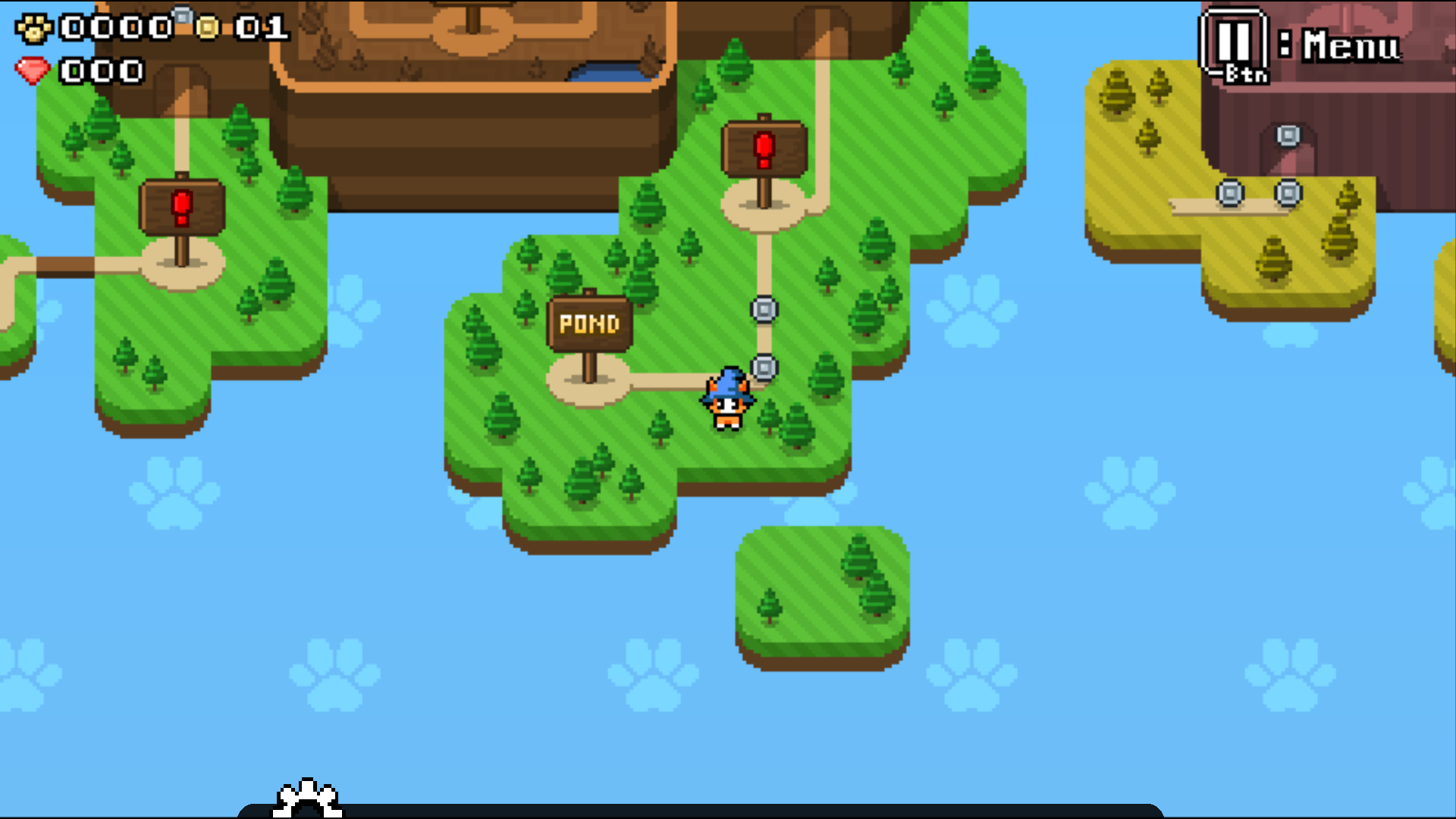 I was astounded by how many levels MagiCat actually had, usually with the indie titles they can be fairly short but not this one, and what’s even more spectacular? Every single one of those 63 levels has its own unique boss. Yep, 63 annoying little bosses. Fun, fun, fun. What I liked though is that the boss for a particular level would be related to that level, like it would usually be a bigger, badder version of the main enemy in your level, usually a big blob or sometimes even a flying sheep… You play as a magical cat, it wasn’t going to make sense.

MagiCat’s ‘story’ could last anywhere from 8 to 25 hours depending on if you want to 100% every level or just run straight through, as each level has collectables in the form of red diamonds and also some kind of jars filled with a blue substance. So you will have a good amount to do whilst going through the game but what’s better than that? The game has its own achievements! Achievements? On the Switch?! I know, it’s a dream come true, well for me anyway. 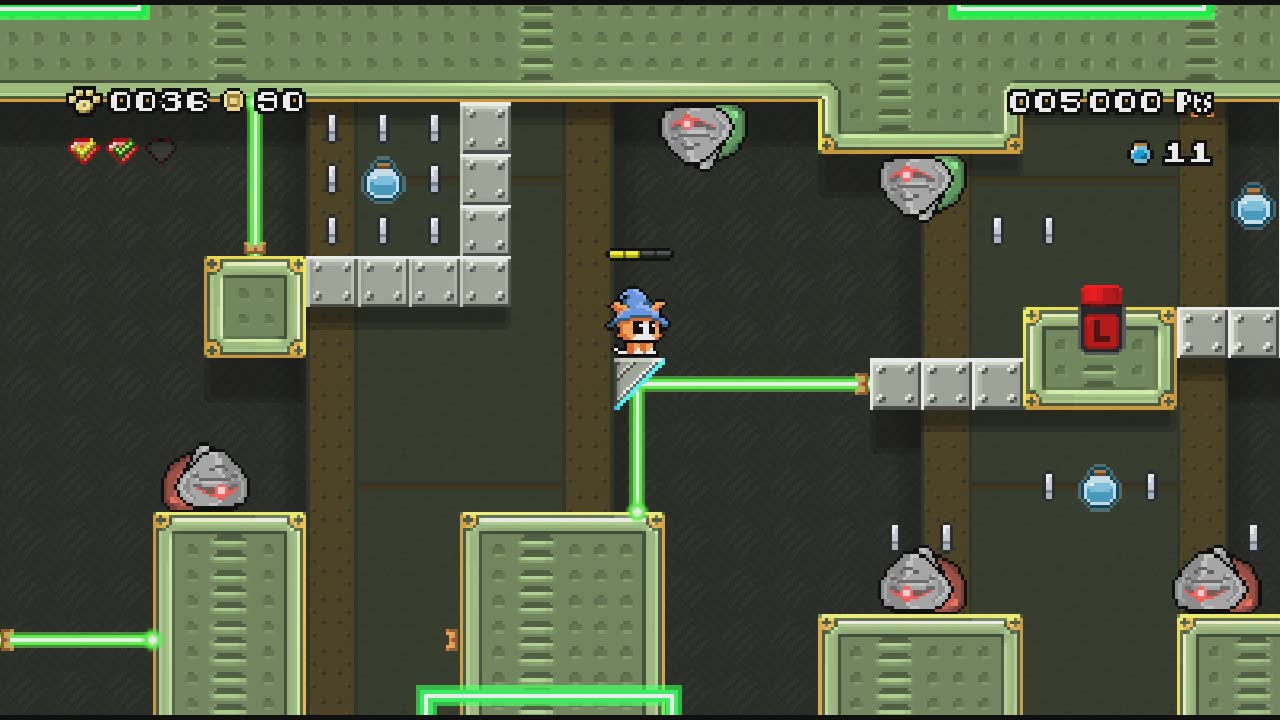 MagiCat’s graphics are certainly a blast from the past with its stunning pixelated art and its soundtrack follows along the same lines too. Although it’s nothing you will have stuck in your head afterwards, it still brings back that nostalgic feel whilst you’re playing and it’s great that developers are holding onto that.

Overall, MagiCat was a pleasant surprise. It’s adorable, fun, charming and somewhat simple gameplay keeps you hooked from level to level. It’s a game you can play with no real thought, you can completely shut off and just play, and I like that. It’s nice to play a game that doesn’t require your full attention and whilst playing MagiCat I found myself completely relaxed. The difficulty wasn’t an issue, not because the game’s easy, but because I didn’t care that I had died. I’m a massive fan of Indie titles as you can often find many gems that slip under the cracks and don’t get the attention they deserve and this is definitely one of them.

REVIEW CODE: A complimentary Nintendo Switch code was provided to Bonus Stage for the purpose of this review. Please send all review code enquires to press@4gn.co.uk

Mix a cat with a mages hat and what do you get? MagiCat!