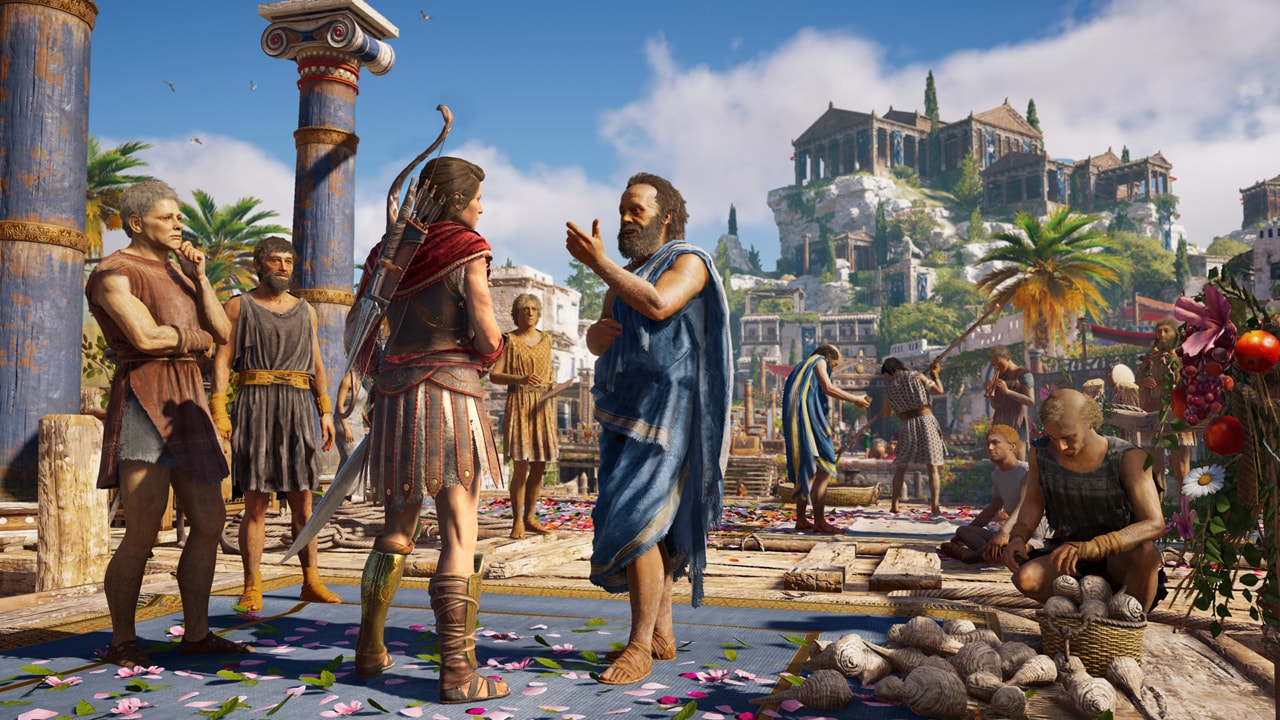 Assassin’s Creed Odyssey released on October 5th, 2018, from Ubisoft Entertainment, and plunges the player into the might and lore of Ancient Greece. Once again, our main character is using technology to experience long-ago times in her genetic past – and stepping into the shoes of a Spartan Hero is no easy feat. With a Choices-Matter dynamic, engaging plot, and vividly enjoyable combat system, Assassin’s Creed Odyssey is an epic addition to the successful franchise.

Players can choose between Kassandra and Alexios as to which Grecian ancestor’s story to inhabit; I always appreciate the option between a male and female character. I chose Kassandra, a warrior-for-hire believed to be favored by the god Zeus. Her pet eagle, Ikaros, is her access to birds-eye-view scouting — something that comes in handy more and more as the difficulty progresses. During gameplay, players take control of the eagle to fly around, manually scouting and mapping enemies, friendly NPCs, and the terrain for Kassandra. But Ikaros isn’t the only animal companion to join our Spartan heroes in Odyssey. Early on, players can choose their own horse from a set of three. Basically, one of the options can climb, another is fast, and the third is called a warrior’s Mount. I picked the third, and Phobos the horse served me well; having an in-game mount is always a treat, especially in a landscape that is as vast and vivid as Odyssey’s Grecian world. 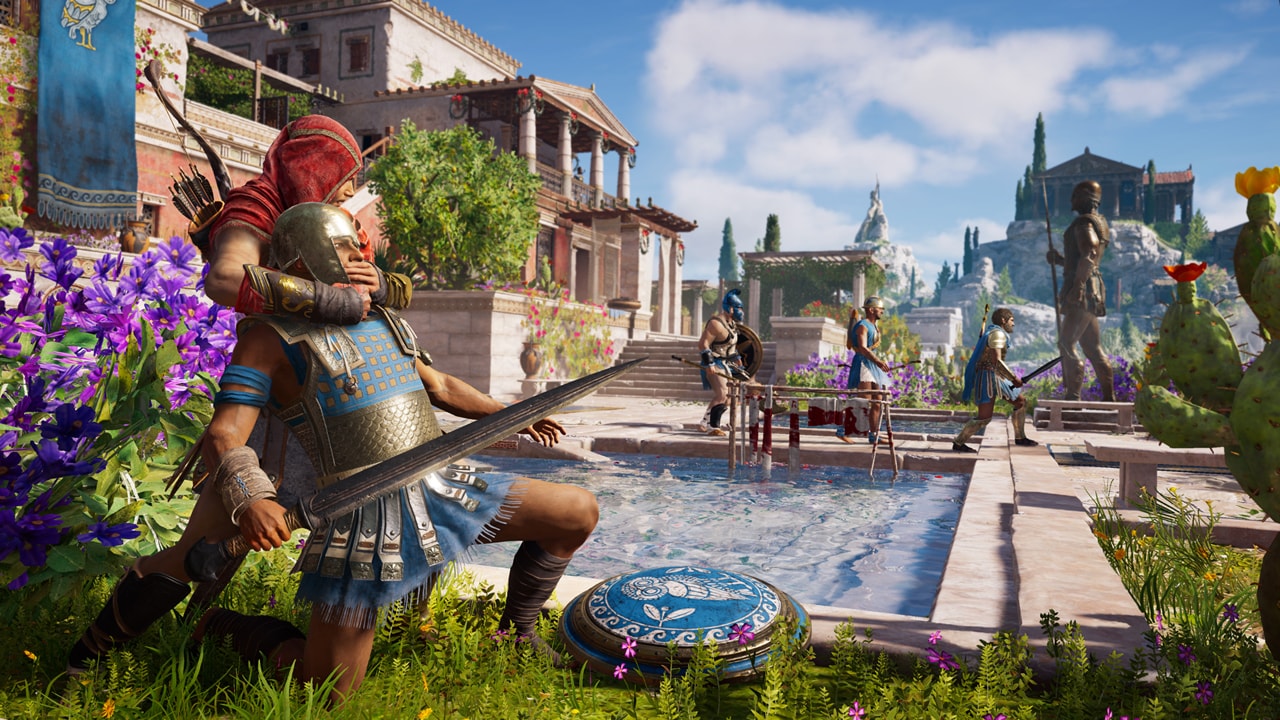 In fact, the world itself is one of the best aspects of Assassin’s Creed: Odyssey. I was immediately impressed with how lush and detail the landscape is; homes are warm and inviting, and full of what I believe is period-appropriate gear, food, household effects, and town elements. The characters are just as impressively designed; Kassandra and Alexios are believable as Spartan heroes, which is no small detail. I loved that Kassandra isn’t a skimpily-clad, waif of a woman – she’s muscular and defined, as one would expect of a woman warrior who works with a bow and arrows. Her body has scars and flaws; her hair is crisp and pretty, but also pulled back. The armor and clothing choices are fitting, and fun to slowly unlock. One of the first garments I countered was Penelope’s Cowl, which required a quest to obtain, but after, it finally felt like an Assassin’s Creed style cloak and hood.

As a huge fan of Ancient Greece and the myths and legends surrounding that time period, I truly enjoyed stepping into the era as Kassandra. The Choices-Matter dynamic lends more importance to how you answer NPCs and choose your character’s personality traits; certain choices carry significant impact, so choose carefully. The NPCs you meet are interesting, and the superb voice acting holds up universally. It’s an immersive, engaging experience, and the world of Odyssey comes to life immediately. The game begins with a dramatic cutscene and instant combat; it’s a mere taste of the elaborate combat system that exists within the game. As you level up, Kassandra and Alexios gain access to more and more impressive manoeuvres and feats, and I enjoyed having a three-tree combat system. I could specialize in Ranged combat, the way of the Warrior (melee), or even enhance my Stealth abilities. 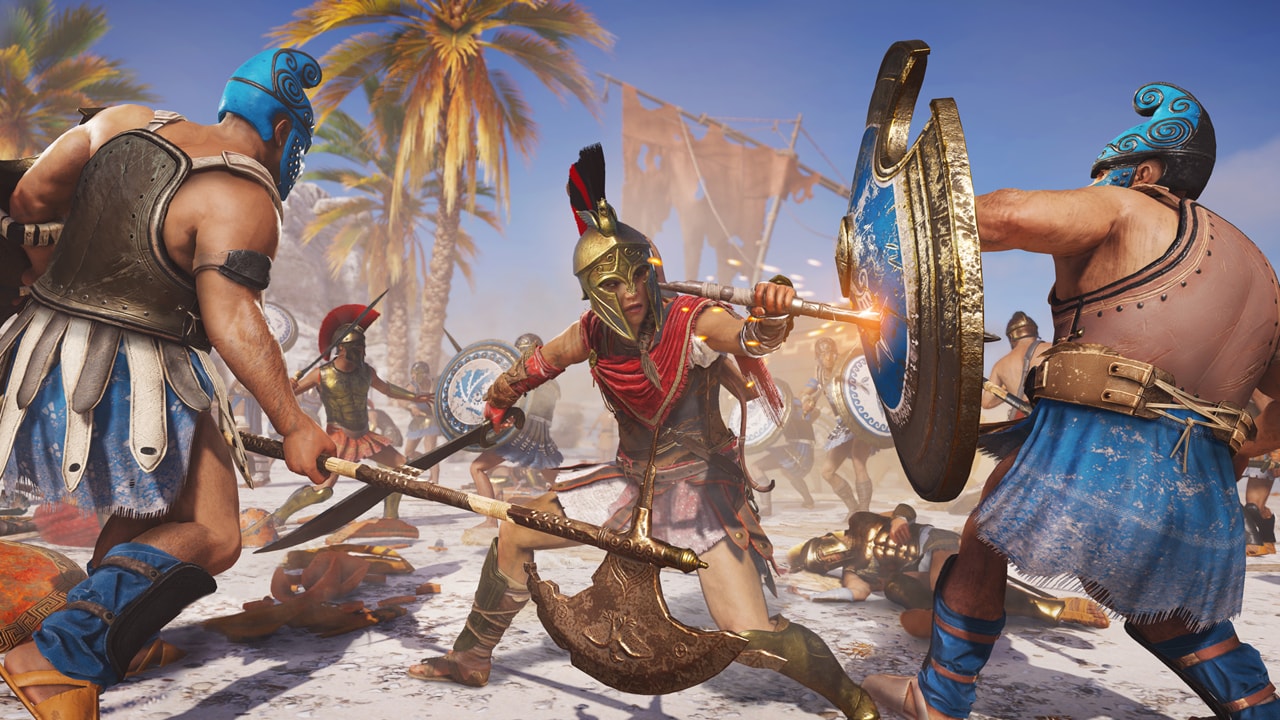 Another excellent feature of Assassin’s Creed Odyssey is the sheer volume of gameplay available. I had sunk a solid 5-6 hours of time into the world before I ever officially exited the Intro; I had just finally unlocked the shipboard portion of the storyline, sailing off with Kassandra on a mission, when I realized I had only just begun. The fact that you can challenge yourself against the Arena for better loot, explore side quests galore, and even replay as the second character choice all lends tremendous replay value to Odyssey. And the dialog interactions with NPCs certainly lends well to wondering what might have happened if you had chosen a different sort of response – would they still be a friend or foe? The RPG style levelling-up system lends yet another new layer of variety, allowing the player to truly customize how their chosen hero interacts with the world.

Visually, Odyssey is one of the most enchanting titles I’ve played in recent years, and the soundtrack is as epic as one would expect from Ubisoft and a franchise such as this. And while the loading screen times are a little excessive here and there, overall the gameplay is smooth, polished, and responsive. Combat feels highly intuitive and is a joy to experience; even riding a horse through the countryside looking for crafting materials is exceptionally fun. There are missions in addition to the primary/secondary quest options – basically job boards that players can check and complete for bonus equipment and XP.

Assassin’s Creed Odyssey is an absolute must-buy for fans of the franchise or gamers who want a gorgeous, riveting Adventure title to sink dozens and dozens of hours into. Kassandra is a badass female warrior who doesn’t pull any punches, and the characters she encounters are just as enjoyable to get to know (or loathe). The combat is incredibly satisfying, and players can choose to be melee experts, ranged snipers, or assassins – or any combination therein, thanks to the RPG-style leveling system. The experience is highly customizable and deeply rewarding; with only a dozen hours of gameplay logged I feel I have barely scratched the surface. The cost-to-time ratio is generous, and the numerous reasons to replay Odyssey make it a great investment. I am partial to the Ancient Greece world, but even if that era doesn’t appeal to you the action, storyline, and customizable journey are absolutely worth it.