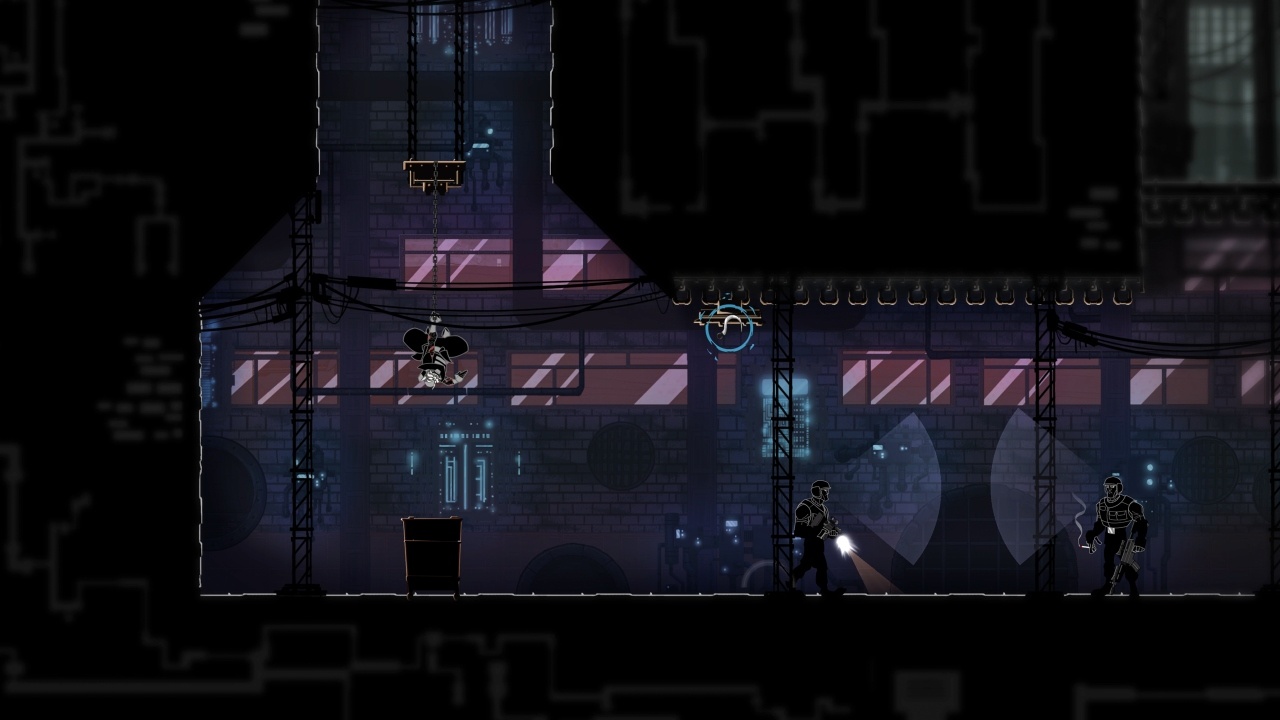 A truly great game can often come from word of mouth alone. Years ago, I used to sink every cent I had into the Humble Bundles as soon as they appeared on the storefront. For newer gamers, Humble Bundle used to sell fantastic groups of games for pennies on the dollar, often revealing more games a week later to make the bundle even more exciting. I don’t think they’ve done that for years now, but it used to be a tradition that got me to hammer their website at 3 in the afternoon every Tuesday. Anyways, there were two weeks where I was financially out of commission, and I watched as a Humble Bundle came and went, and I had not purchased it. Front and center was a game I had never heard of called Mark of the Ninja. It looked awesome. It sounded awesome. Everyone of my friends who had got the bundle confirmed: it was awesome. So now, here I am, more than five years later, and I’ve finally gotten a chance to play Mark of the Ninja Remastered on my beloved Nintendo Switch. And guess what: it’s awesome.

Mark of the Ninja is the tale of the Hisomu ninja clan, a centuries old, secretive society that has thrived in the modern era through secrecy and staying in the shadows. As our story begins, the Hisomu dojo is under attack, and our hero must act fast to save his sensei. The ninja hero has been given a mystical tattoo that acts as a double-bladed sword: it imbues the receiver with amazing abilities and heightened senses, but it also slowly destroys his mental acuity, eventually leading to madness that can only be stopped through death. Our hero is tasked with taking revenge on the corporation who has attacked the dojo, the Hessian organization. But the ninja still cannot get the words of the invading forces out of his mind: “You picked the wrong people to steal from. Even though sensei dismissed this claim, could there be some truth to the invaders words? The ninja will find that the path towards balance and justice is not a clear or easy one, and he will make many difficult decisions as he fights against the ever-encroaching destruction of his mind.

Mark of the Ninja Remastered presents as a side scrolling stealth adventure game, where your character will have several objectives that appear as the level unfolds. Usually, once you are able to get to a certain location, the next objective will be revealed, but there’ll also be additional objectives that crop up at the start of the level. Things like “break 20 lights” or “hide five guard bodies in dumpsters” will challenge your character to perform extra tasks that, honestly, I would have considered doing anyways, but now you’ve made it rewarding, so I’m definitely gonna do it. As we stated, the Ninja in question has been enhanced by his tattoo, giving him amazing stealth and agility, as well as incredible hearing and reflexes. You can sometimes tell where certain things (enemies, dogs, alarms) are merely by sound waves that appear on the screen. You’ll be able to peer through vents and down grates in order to get a full read of the room before you enter, and then be able to execute multiple actions before the other NPCs know what’s happening. There are limited range items that come into play to assist your quest, such as noisemakers (to cause distractions), smoke bombs (to evade lasers and guards) and throwing knives, because why not break a light from a hundred yards away like a boss? 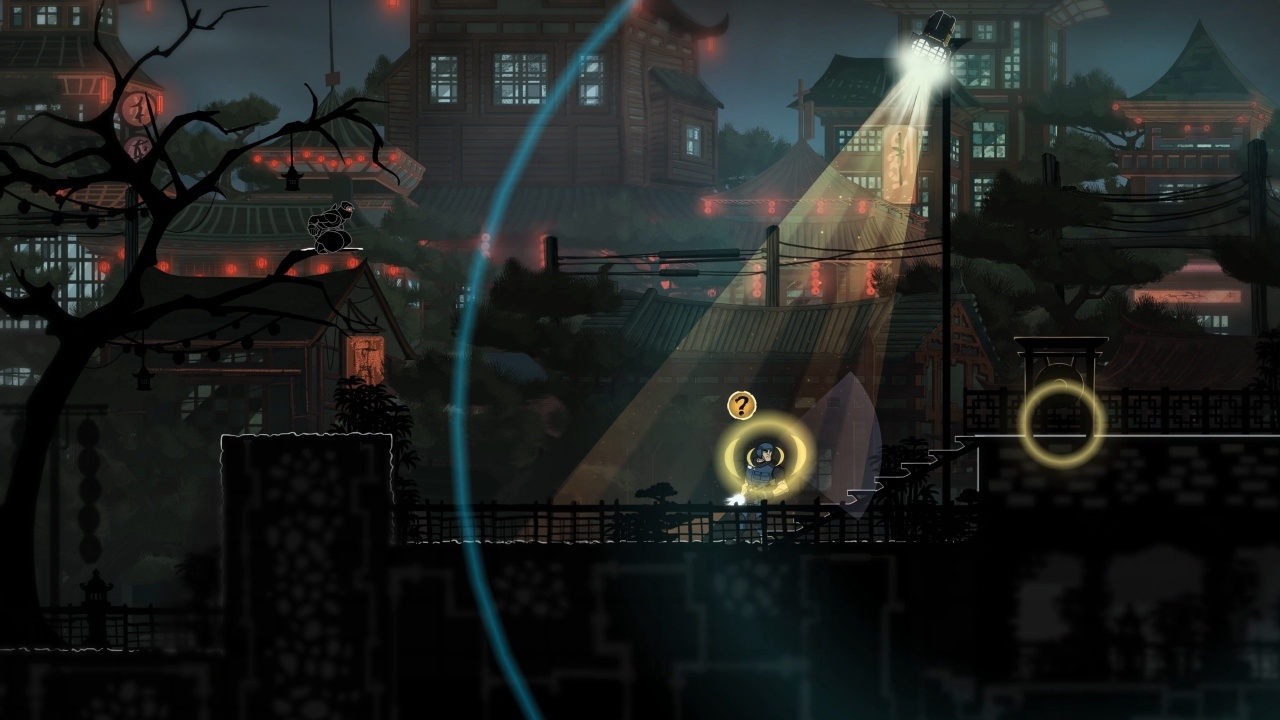 As a ninja, you’re in peak physical condition, but the straight on, hand-to-hand combat style isn’t going to work. Not only is it sloppy and noisy, but, hint, you’re invading a massive complex with mercenary guards who are armed to the teeth. It literally takes about three good bullets before you are dead as dead can be. Instead, work with the darkness and the tricks you have to create the perfect, silent environment that you control. Maybe you’ll just slink past the guards undetected, showing mercy to the fools who never knew how close they were to death. Maybe you’ll slay a guard and hide his body, leaving his comrades confused and nervous as to where the other shift of patrolmen has disappeared to. Or, if you’re like me, you’ll love to kill someone, drag their body around, and then throw it down onto unsuspecting other guards, terrorizing them and causing them to go full freak out mode, making the kill even more satisfying later. Maybe I’m not the most ethical ninja, but that kind of detail does get you a bunch of extra points, letting me see my high score shine through my inherent sadism that I’m inflicting on rent-a-cops.

Mark of the Ninja Remastered has three great things going for it: art, style, and execution. Firstly, the design of the game really captures this early 90s feel in animation,and I mean that in the best way possible. Rather than go the obvious route and over do the anime angle, Klei Entertainment took care to make the game look original and independent as possible, bringing about this sort of effect that reminds me of shows like Gargoyles, Batman the Animated Series, and, to a lesser extent, Samurai Jack (less dark lines but good action perspective). Even though the game is absolutely stunning during the cutscenes (especially ones that explain the dark flower that gives the tattoos their powers), each level simply gives the player a grand scale of the world, from darkened rooftops to shadowy vents, stormy nights and windswept deserts, the ninja must explore far and wide, and see many things, on the journey to find out the truth and balance the scales. Sure, most of it is ridiculously dark, but do you think you’d do as well as a ninja running around in broad daylight?

Stylistically, I have one thing to say for Mark of the Ninja Remastered: Tenchu 2D. If anyone remembers the Tenchu series that was birthed on the PlayStation, it was one of the greatest, bloodiest adventures I had as a young man, simply because it taught me to actually do stealth and make it work. Previously, games like Thief (the old one) or Tomb Raider (also the old one) rewarded stealth, but you could still make it work if you got caught being obvious and a dumbass. Not Tenchu, and definitely not Mark of the Ninja. Sometimes it literally only takes one person seeing you and raising an alarm for the whole game to come crashing down. Early on, you have a mission where you need to follow a guard to where some other stuff is being hidden, and, even though the dude is walking in a straight line, you still need to tail him and not jump ahead. The result is some lightning-fast decisions to either let a door close and then pick the lock seconds later, or to slide in through the same open door, drop a smoke bomb or smash the lights in a nanosecond, and then drop through the floor grates, taking care to not fall into flashlight beams in the process. When you get this game down and operate smoothly, you really feel like a ninja. 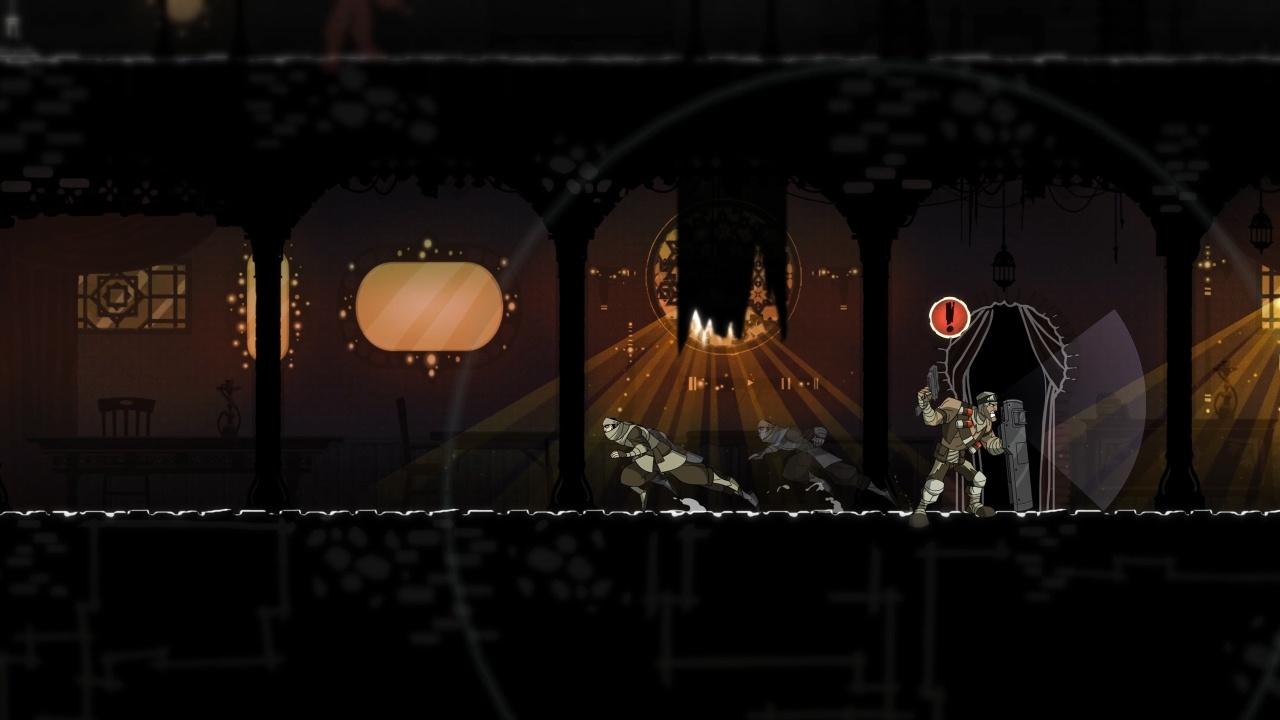 However, it’s the versatility in how you do things that really makes Mark of the Ninja Remastered a treat. Games like Ronin have amazing setups to do this kind of “puzzle that’s violent” style, but, truth be told, you only need a single error for Ronin to kick you out and ruin everything. The ninja here has the ability to think on the fly and approach the problems from different angles, and, even better, adapt and survive. As you progress, you can unlock different moves and items, and even costumes, to make you think faster, fly further, hit harder and kill better. One of the first things you can unlock is the ability to hang like Spider-Man from a rafter and then sling guards up from the ceiling. You want it inflict terror? How about having to see your fellow coworker strung up like a ham in a deli? If you get exposed, you have a chance to throw down a bomb and disappear, vault over someone and try to fall into a safe zone, or maybe just fight him and pray another guard doesn’t appear, because it only takes two mobs to totally ruin your day. A perfect ninja is going to have the highest score, get the most stuff and unlock even more abilities faster. But a mediocre ninja will still get a passing grade (provided he doesn’t have a bullet in the ass) and will learn so that he can come back and try again in the future.

And that is a huge part of Mark of the Ninja: replay value. Two great notes about the replay value. Firstly, there’s almost no chance you’ll get three coins (the highest of high marks) on each level your first time playing through, so there’s always completionism to incentivize you. But then there’s also the challenge of trying to do things a different way each time. Turns out there’s a challenge to not kill anyone in one of the first levels, and I only learned that after gleefully making a mountain of bodies because there’s no time limit and I think I may have a chemical imbalance. Go back and revisit old, favorite haunts when you’re fully juiced up off of ninja upgrades and reign down hell like the shinigami you are. There’s a “prequel” level called Dosan’s Tale available from the very beginning (Dosan is the tattoo artist and a big deal in the game) that you can access at any time, but damn is it hard. But this isn’t the kind of game that just goes away after a single run through. You want to improve. You want to do better. You even want to see the two different endings, because there are two, and they’re both tragic and memorable.

Mark of the Ninja Remastered is the pinnacle of what we should be looking for in older indie titles coming to the Switch. Not only is it a great game all its own, it has all the extra, delicious content baked into a single entity to make it more enticing for Switch gamers. Never played it before? Great news, it’s here and it performs amazingly and looks even better. Played it some years ago? Dust off your katana and see if you still have what it takes to follow the path that destiny decided for you. Hell, if you’re really that confident, go back in and check out the commentary track (yes, more video game director’s commentary!) that’s baked in, it’s pretty damn fascinating to read/hear about the development and inspirations. But, most importantly, do it because there’s no greater joy than kicking in a door and sack-tossing a dead body at a bunch of already panicky guards, and then hear them fill the air with bullets that hit no one. It’s the simple joys in life that make it worth living, and Mark of the Ninja Remastered is one of those joys.

Mark of the Ninja: Remastered Review

You are not the Samaritan, nor the priest, nor the Levite. You are the ill intent.