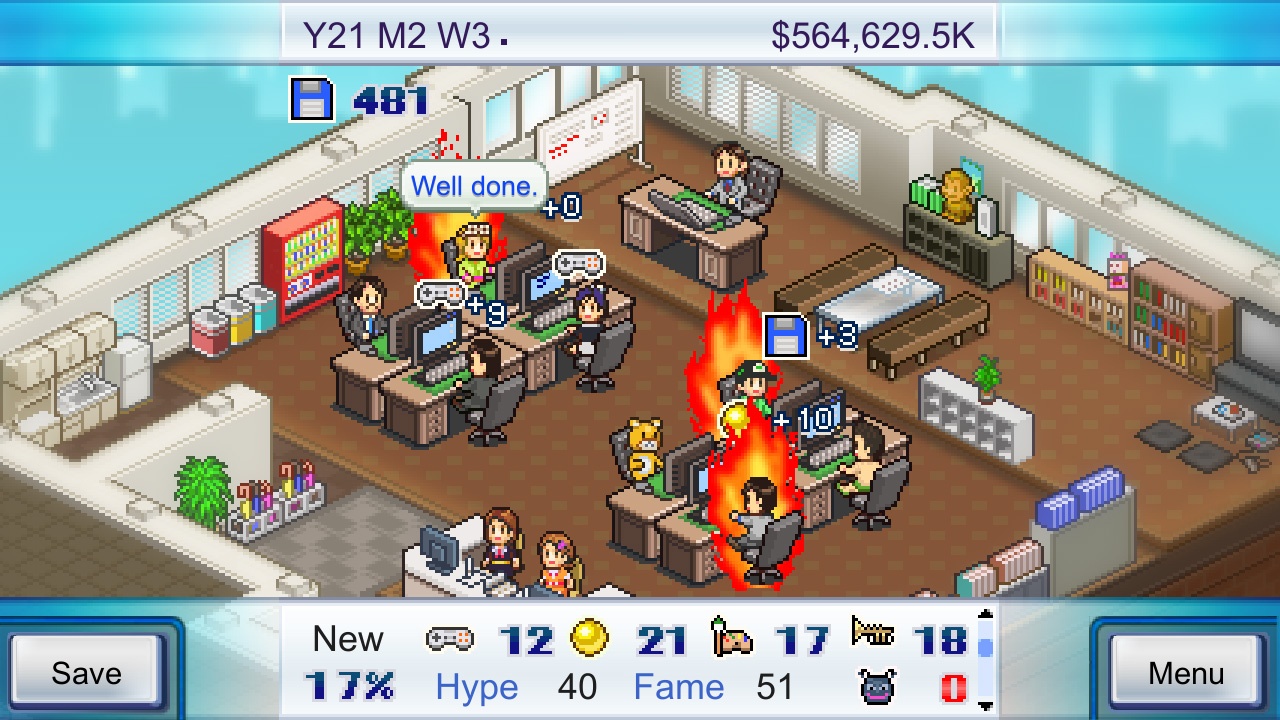 Kairosoft has made quite a great business out of their simulation/management games on the mobile storefront, creating a large number of “Story” titles. It fits exceptionally well into the market: they’re fun, they have several creative twists for each, and they can be chain-played for hours at a time or picked up for just a few minutes between train stops. However, not being satisfied with conquering cellphones, they’ve decided to dive into the Switch’s ever-expanding eShop. The effect is…well, I think it could have been better.

Their very first big hit title was Game Dev Story, which, obviously, they decided to lead off with for Switch users. The name is very self-explanatory: you act as the CEO of a video game developing/publishing company, and it’s up to you to create the next big hit. Pick a genre, pick a subgenre, decide how you want to balance the game (up the realism or cuteness, etc.) and then get to work! As time goes on, things can easily happen, like one of your coders has a burst of creative energy that leads to boosted graphics or a plethora of bugs. Maybe larger studios will announce new consoles, and you can leap on that to try to be a leading edge release and capture the new marketshare. All of this is in a quest to become the best company you can in just a few decades. Get accolades, lose work from blackouts, hire and fire the best and the worst in the industry and make the finest golf trivia game in all the land. 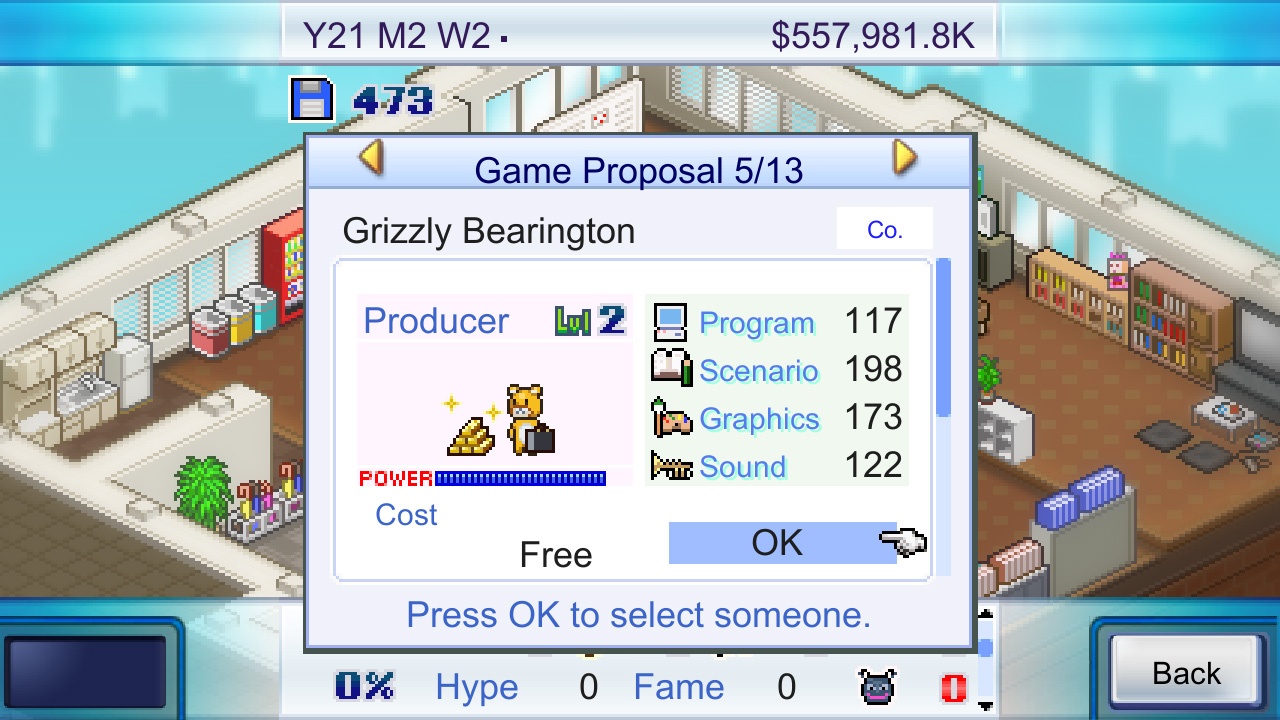 As one of their earlier titles, Game Dev Story is significantly less complex than future iterations of the Story franchise, and it works out well on the Switch. You start with a skeleton crew of workers and gradually up your office size and workforce. Occasionally, parts of the game can be done by hiring outside help from freelancers with reputations. You’ll find new workers from different searches, starting with word of mouth and ending with the best of Internet applications. Workers do have a limited amount of energy, though: not only do they need to call it quits and go home for the night, they’ll occasionally be too stressed out to keep focused and do a good job. Maybe they just need a vacation or additional training (at the company’s expense, of course). Or maybe a few re-energizing drinks from the vendor who occasionally stops by will do the trick with absolutely no side effects whatsoever.

Since things are so simple, players of Game Dev Story will have a chance to really get a full feeling for the game in just a few short minutes. Odd combinations of genres (animal racing games, for example) have the chance to be sleeper hits or complete failures. If you have any knowledge of video game history, you’ll see that the consoles announced by the other companies will mimic the release schedule of gaming starting with the Atari/MSX era and ending somewhere around the Wii. Players who enjoy video game history will be able to use this information to their advantage, as sales of the consoles almost directly correlate to their real life counterparts.

Game Dev Story is also crazy relaxing in that aspect of simplicity. You can only make one title at a time, sometimes simultaneously marketing one while developing another, but that’s really as far as the spinning plates go in this title. Oh, maybe you occasionally get booth space at the local game convention, but that takes all the effort of deciding how much money to spend and the AI does the rest. You gotta keep your workers happy, maybe trading up to more experienced and excellent writers/directors/audiophiles as time goes on, but there’s a finite point where you’ll get “the best” in any category. If you get your hands on a hacker, that’s practically a golden goose right there, as they tend to be everymen who can cover almost any job. The hardest part is having played the game previously and knowing what will be coming and patiently grinding out the titles in the quest to get to the level where you have an eight person staff banging out blockbuster golf shooters. 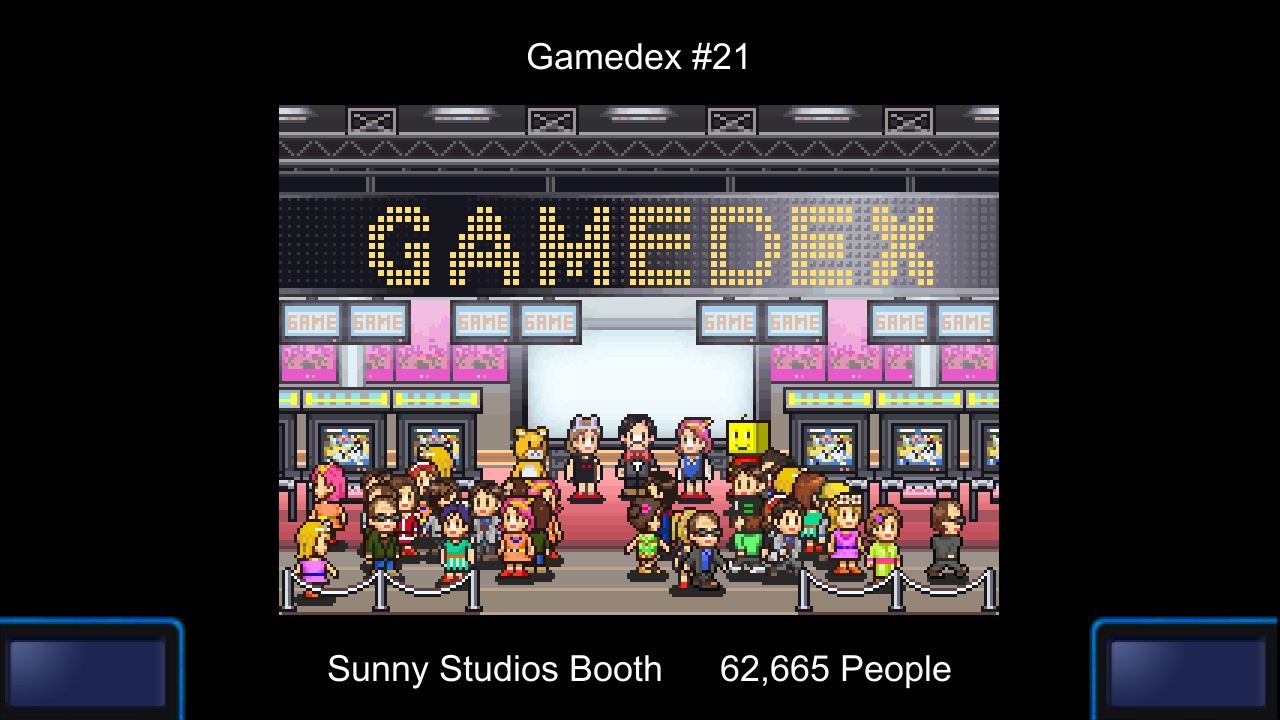 The general aesthetic of Game Dev Story is cute and enjoyable, from the tiny sprites of your workers running around to the poppy, upbeat music that plays throughout. You cheer for them when their game gets perfect scores by game critics, cry when they find out another studio is releasing a similar game, and cross your fingers when you realize that 83 bugs are too many and maybe you can just ship now and it’ll all be alright. Even if you’re not a huge fan of the idea of game development, the concept is so simple to pick up on (here, not in real life) that you’ll be deep in the throes of commanding your company in no time.

Now, as a port, I’m a bit disappointed in Kairosoft. The controls are mapped well enough, with it being quite intuitive to trigger with the L and R buttons for the menus and scroll through with either the joystick or the directional buttons. Touchscreen is on point, and probably the way that most people will play this: I can’t imagine having Game Dev Story up on my television any longer than to watch the awards show that happens every year and hope for a victory. But the text bubbles are straight up broken. You’ll have irregular, odd splits in words, sometimes literally shaving the last letter off and putting it on a new line (ironically, I saw this happen with the word broken). This isn’t even a singular instance where it happened once towards the end of the game and maybe QR missed it: it begins almost immediately, within a couple of minutes, and happens time after time throughout. Though it doesn’t affect how the game itself runs, it’s a sloppy, rushed mistake that is literally showing a massive bug in a game about game development.

I love Game Dev Story, I really do. That’s why I bought it on my iPhone and then again on my Android tablet. It’s a quick, simple and fun way to lose track of time and be proud of yourself for creating a great game. But it’s so hard to justify a game that looks like a rushed port with more than double the price tag from the phone version. This particular title is not worth getting on the Switch unless you are adamant about being able to play Game Dev Story everywhere you go no matter what. In which case, fair enough, it’s a solid version, I just need Kairosoft to fix the text bubbles.

A great game with a very mediocre port, maybe this story should have stayed mobile.