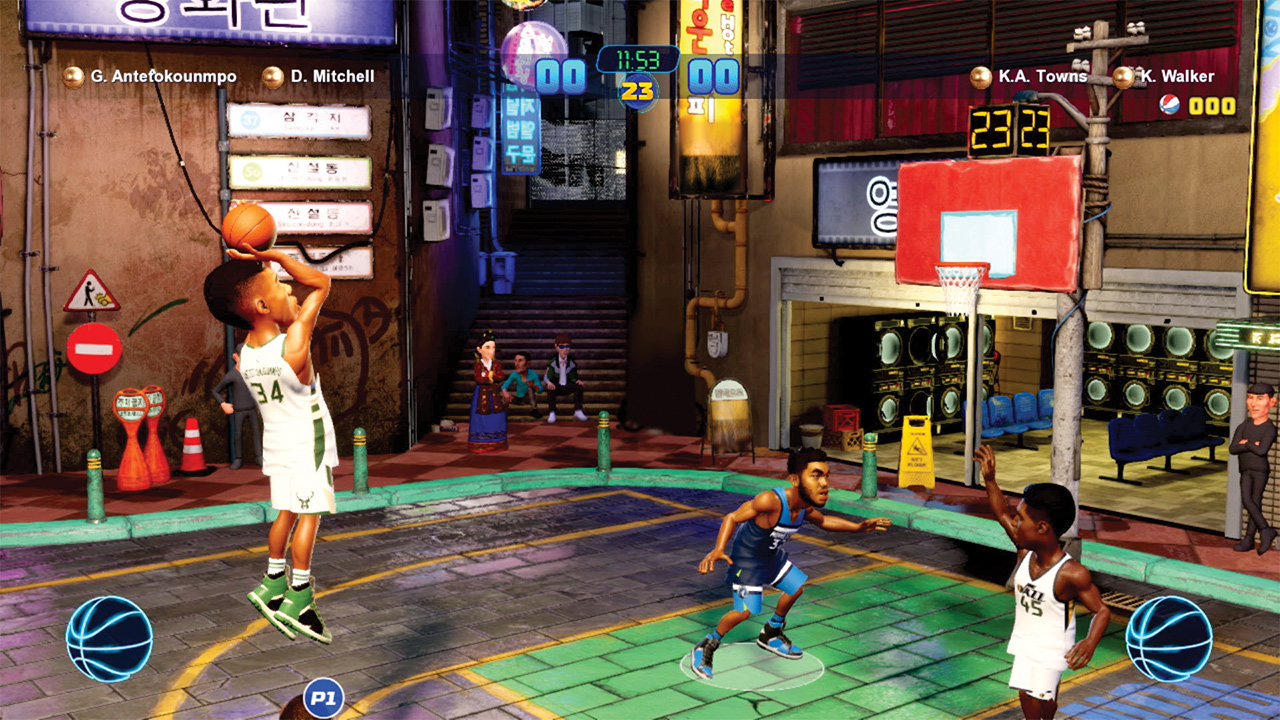 When it comes to making arcade renditions of sports within video games, they rarely fare as well as their, more simulated styles of counterparts. It can largely depend on the style of sport being depicted, with the more arcadey versions of the games not really containing all of the elements that make up the sport; whether it be reduced team player numbers, unrealistic settings or crazy mechanics. However, it can also be said that some styles of these games produce better results than a simulated experience. For instance, the sport of golfing or tennis can easily fit into this category, as so can basketball. This is certainly the case when it comes to Saber Interactive’s NBA 2K Playgrounds 2 as it slam-dunks a release upon the Nintendo Switch.

Published through 2K Games, this arcade take on the popular sport follows on from the controversial, NBA 2K Playgrounds; especially with its recent removal from digital store fronts. However, this is a sequel that has built upon its predecessor, expanding its roster with two new modes of play, both in solo and multiplayer, new moves and a more satisfying experience in terms of how it plays. Whilst the core mechanic of the game still feels the same, a few tweaks here and there has ensured a more, smoother ride this time around; although it can be argued that its depth still feels slightly shallow, although its varying forms of longevity and replayability should ensure that this is an element of the game that isn’t all that necessary.

The first major change within this game comes in the single-player’s season mode. Upping the roster from the original’s six-match mode, this new tournament now boasts a fourteen-match season, with a best-of-three playoff competition for the teams that finish within the top eight of each conference. Its style brings a nice pace, with an entire playthrough of a season only lasting a couple of hours with the default three-minute matches and 2v2 competitions. It matches the arcade element of its mechanics, as well as producing a title that sits nicely within the casual style of its gameplay. However, this is also a mode that can be played co-operatively with a friend; either locally or online, which is also a nice inclusion. It also feels as if the AI has been given an overhaul too in this mode, with smarter opponents and four choices of difficulty to test your ball-bouncing prowess. 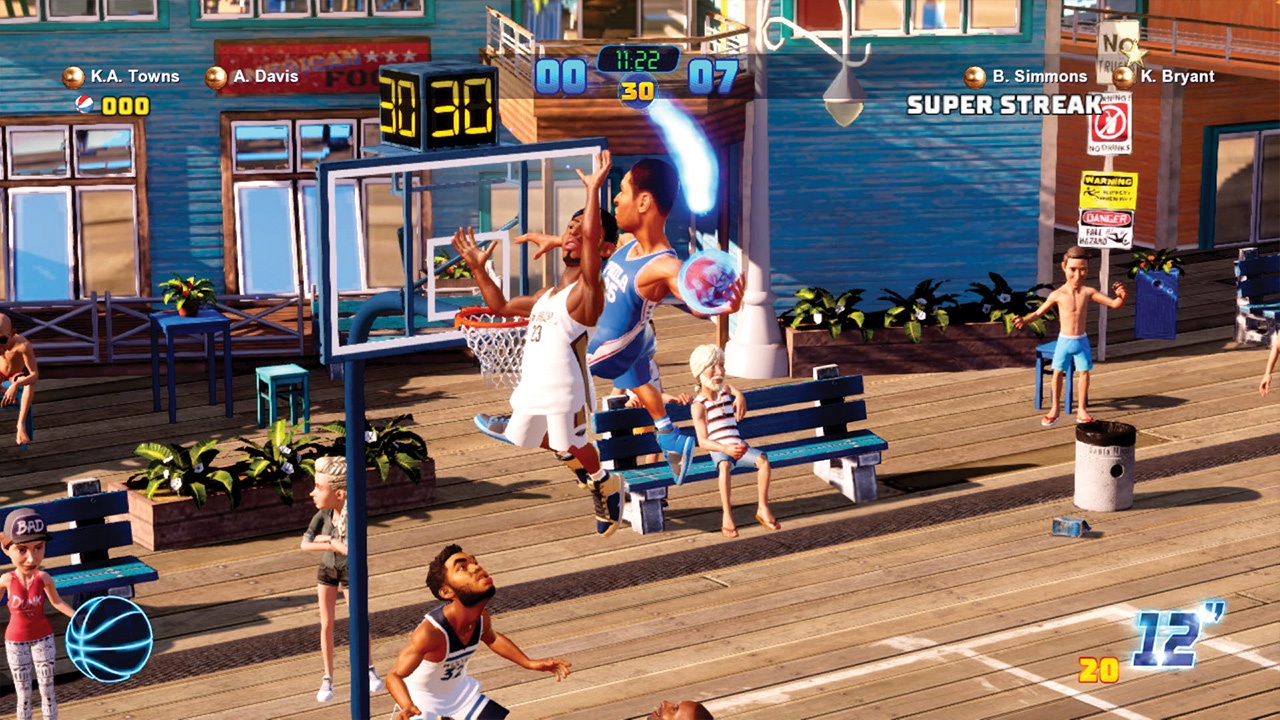 The card collecting mechanics of the original make a welcome return here too, with winning certain competitions with specific teams awarding you with, not only monetary values to purchase new packs, but also legendary players from the NBA’s history. These legends are well represented within the game too, with signature moves and a style that makes them stand out from the crowd. By purchasing new packs, you can acquire a whole host of new players, as well as cosmetic items to deck out your various teams. Thankfully, it isn’t too difficult to accrue enough credits to buy these packs.

One playthrough of a season should ensure that you have enough money to buy multiple packs; thus expanding your roster of players to create more successful team match-ups. Be warned though, there is a micro-transaction element set up here to unlock everything on offer, though I found it not to be a necessity in the aspect of team-building. The reason for this, is that the game boasts quite a decent mix of current NBA players and legendary heroes; although some may be disappointed to learn that not all NBA teams have their full complimentary of players within their line-ups.

As well as its overhaul to the seasons mode, the game has also received a boost to its online component. Playground championship offers a variety of modes and play styles, with ranked play and leaderboards. All matches can be played with AI team-mates, or co-operatively and competitively with online friends or through ranked matchmaking. It offers a lot more choice than the previous title with its online modes and the inclusion of leaderboards and rankings contains enough to keep you invested within these modes. Of the handful of games that I managed to play, there were no discernible differences from playing solo, with everything running with the same level of smoothness found within the seasons. 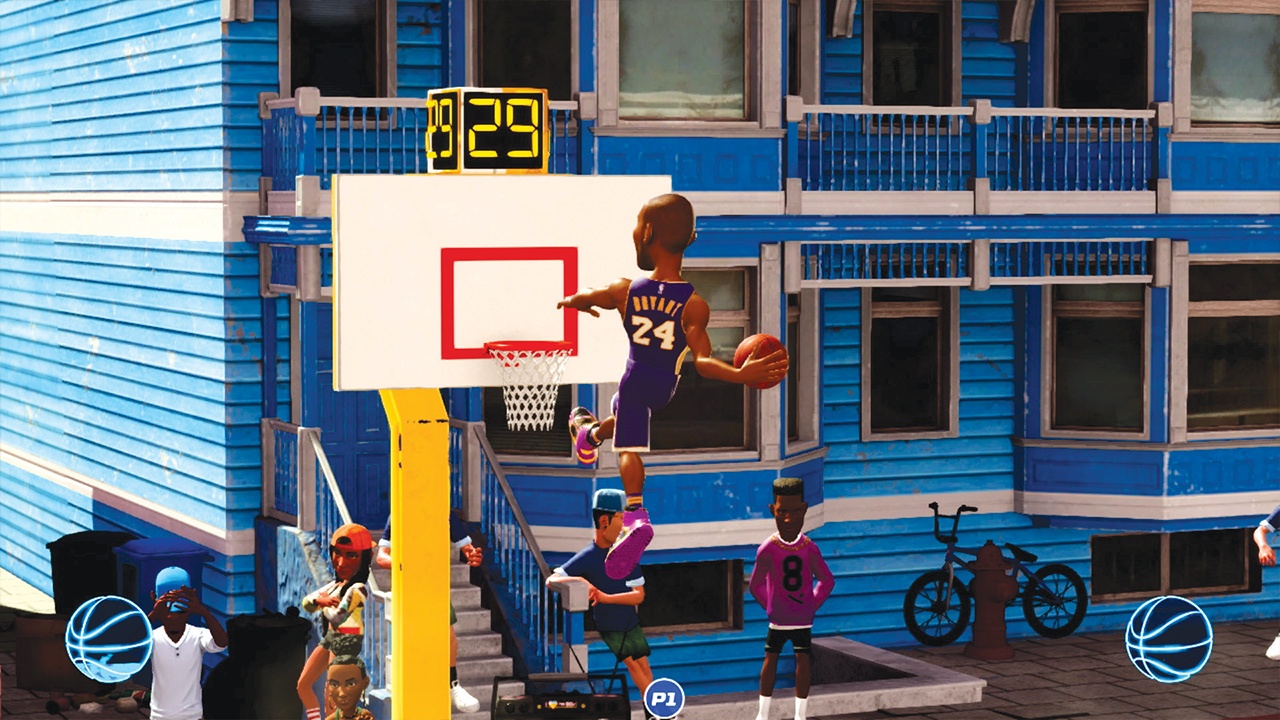 Presentation-wise, everything here still retains the bright and colourful aesthetics of the original; as well as a thumping soundtrack that matches the style and pacing of the game perfectly. On the court, although the game feels remarkably similar, some minor changes have brought a more refreshing change that builds on the mechanics of the original  and produces a more exciting level of play. The shot meter still retains the same elements and mechanics, but is presented in a much more functional semi-circle, rather than a straight-forward bar. Timing your shot so that the meter lands in the green segment is still here, but it just feels more intuitive than before; although if you were to ask me why, I wouldn’t be able to pin-point the reason. However, what it does produce is an instantly accessible game that is incredibly easy to just pick-up-and-play.

The incredibly satisfying and ultimately, over-the-top moves and animations are more stylish than ever and easier to implement. It really does produce a smile when you spectacularly cartwheel over the opposition, only to slam home an ally-oop move to backflip the ball off the rim of the basket. It’s one the things that makes the game so enjoyable to play. Defensive cover has also been given a re-make, with shove and swipe moves feeling more effective and less cheap than previously implemented. This is further enhanced by the lottery pick meter, now represented by a basketball in the corners of the screen. Once filled, they grant a variety of special moves such as unlimited sprint, super strength and multipliers, but this time they can also produce results that can hinder the opposition, such as lowering their chances of scoring a basket or covering the basket with a layer of ice that prevents the opposition from scoring. The Lightning move has also had a make-over, with balls catching on fire to produce automatic baskets from anywhere on the court. This variety and abundance of speciality moves can change the face of any game, adding an air of unpredictability to every match; thus creating an exciting premise every time you play.

Overall, NBA 2K Playgrounds 2 improves drastically on the original, but only in terms of content and certain areas of playability. In large, the game feels and plays the same as the original title, but the few tweaks and additions that have been added are enough to produce a more satisfying and exciting game. Despite the controversy surrounding certain decisions regarding the original game, it can’t be denied that the sequel offers a more refined experience and, ultimately, a very playable game in the arcade style of the sport of basketball. It’s a sublimely easy game to pick-up-and-play, yet difficult to master and contains all manner of addictive qualities to keep you playing. The changes to its solo and multiplayer modes are very welcome, giving the game a much more fulfilling experience and choice in how you play. Despite what the developers have done in the past, this is very much an exciting game and one that easily scores a spectacular basket in a slam-dunking kind of way.

A sequel that slam-dunks its predecessor with a more refined experience and a whole host of new features.