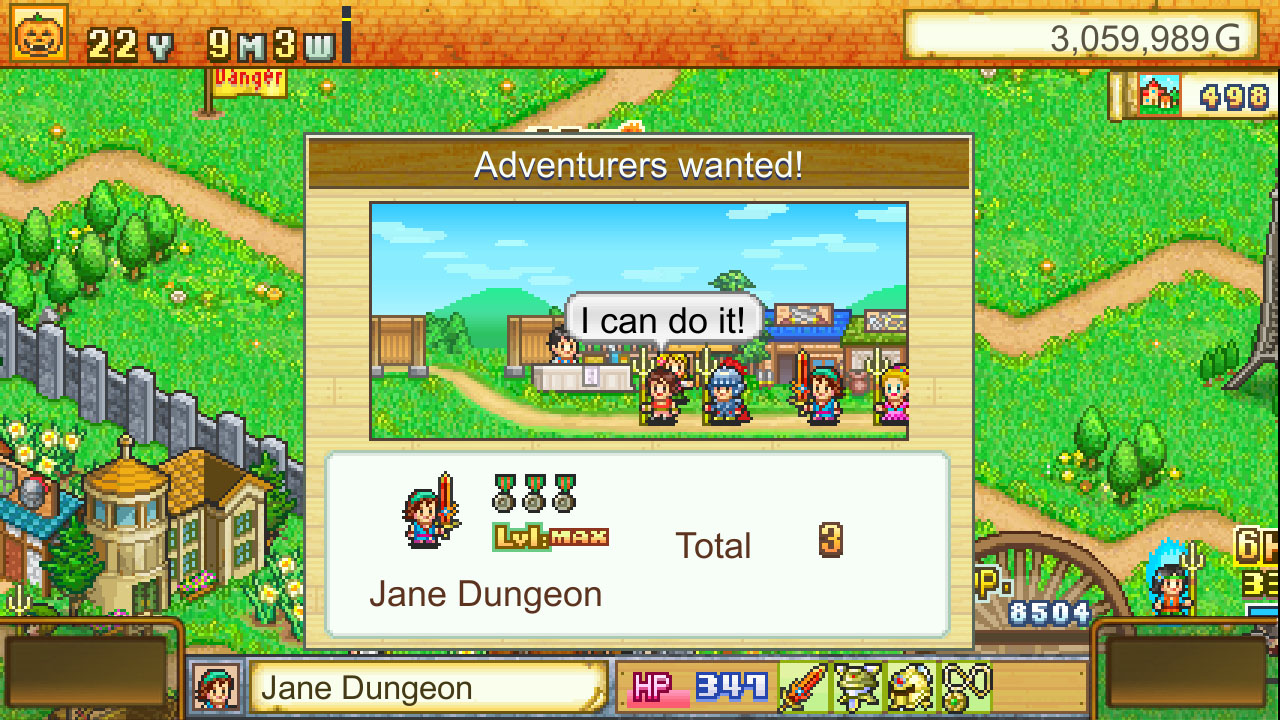 Recently I had the pleasure of writing about AGate Studios’ Valthirian Arc: Hero School Story. A charming game that presents you with the challenge of running a school for would-be RPG heroes. However, once they graduated from your academy, it was left up to them to find their own paths in life and seek fame and fortune in the world of dungeon hunting and role-playing. Well, guess what? I know where they all go next and it’s here, in Kairosoft’s Dungeon Village, as it ventures a release upon the Nintendo Switch.

The premise of the game revolves around building and developing a village that caters for travelling heroes who are in search of quests, fame and fortune. Presented with a plot of land, you must construct and nurture a series of various buildings in order to provide and attract any would-be heroes that pass by your way. These constructs can range from hostels to weapon shops, eateries to houses for anyone wishing to move in permanently in your developing village. By supplying the pixelated AI heroes with their daily needs, they can choose to settle on your land, where you can then send them on quests that sees them clearing out local dungeons and protecting your village from any nasty outbreaks of monster attacks.

Whatever quests they may embark on, the monetary rewards that they earn goes back into funding the development of your village; upgrading existing buildings to house more people, supply better weapons and armour and provide a more filling feed to ensure no hero sets off on an empty stomach. As well as providing for the folk who live in or venture towards the village, you can also host special events to spread the word and attract popularity; all in the ultimate quest of building a famous renown for your creation and the honour of gaining a five-star rating. However, it’s not all about building and maintaining the village, as you can also develop the heroes that dwell in the village to ensure they reach the echelons of their capabilities and create parties to ensure that any quests can be handled by the right heroes and you’re not just sending them all off to their own impending doom. 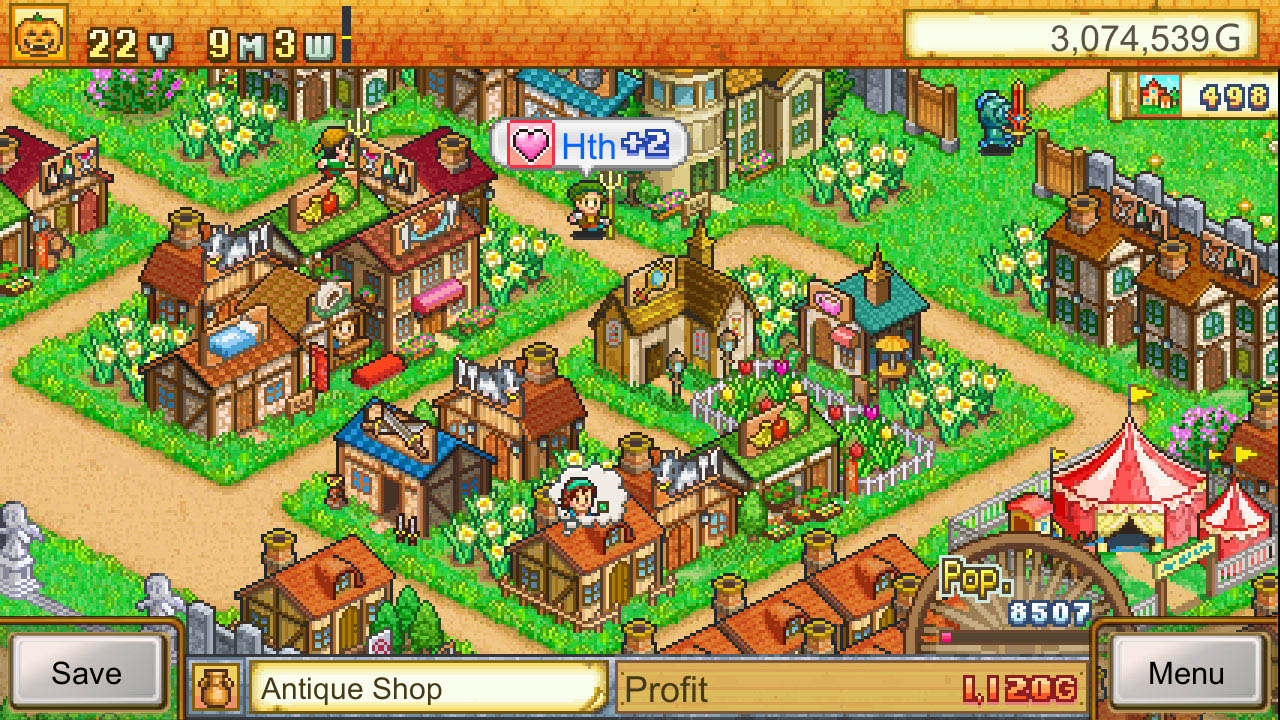 In fact, there is lot here that promotes an attraction to keep on playing. From its cutesy charms and pixelated forms to your own personal pursuit in accruing as much as gold as possible and attaining the best possible reputation for your village and its amenities. In short, this is a really fun little game, although in the long-term, it’s in a limited form. If you’re familiar with the concepts of other Kairosoft games, then you’ll instantly be at home here. If you haven’t, then Dungeon Village provides the ideal starter point for their series of isometric adventures. However, in the game’s pursuit of creating the best of everything, once this has been achieved, then there’s very little left to do.

Sure, kitting out your heroes with the best weapons available, experimenting with magic and creating the strongest party you possibly can is a very fulfilling experience. However, once you have accomplished this, then everything else seems to become a little too easy; especially in the context of completing quests. In a way, this mechanic makes it an ideal game for a younger audience, as the premise of the game would supply a reasonable challenge for them. An in-game calendar counts down the days, weeks, months and years until around fifteen years has passed, after which time you are then graded on your performance. A variety of factors come into play here, such as buildings developed, quests undertaken and gold accrued.

It is possible to carry on nurturing your creation after this time, but there’s little or no incentive to do so. There is always the option to start over again, but with little variation in how to run things and build up your community and reputation, the challenge in trying to beat your original rating soon becomes a shallow experience. I’m not saying that this is a bad game, it’s far from it. Its charms and lures provide a great deal of excitement, and some of its quests and set-pieces are thrilling and rewarding affairs. It’s just that things are a little too simplistic at times and doesn’t offer much once you have seen everything that the game offers you. While it lasts, at least one single playthough, this is a wonderful and charming little game, but once completed, there isn’t much to draw you back in. 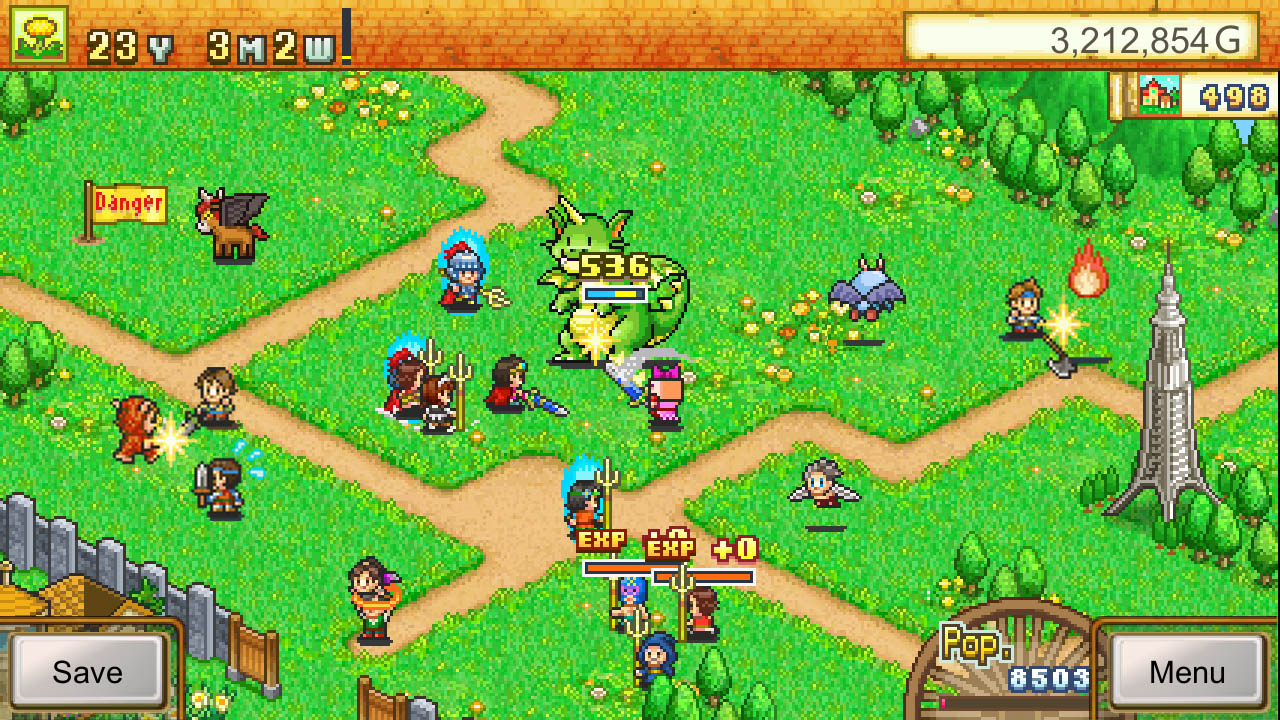 Saying that though, the elements of its gameplay are engaging and contains enough quirky moments to make you smile. The ghosts of slain heroes haunting the houses where they previously resided or exploring temples and dungeons are fascinating, as is building a party to take on a particularly tough challenge which is a very rewarding experience. Also seeing your village develop through your own hard work and planning is a satisfying premise. Daily lives go by and the village soon develops a life of its own as you watch, god-like, at the digital world you have created.

Everything here is presented in an easy to follow way, with colourful sprites and clear and concise information that is easy to maintain. Through a series of menus, you select which buildings you wish to construct and develop and once a dwelling or a plot of land has been decided upon, you watch on as the buildings expand or scaffolds construct to reveal a new build. It’s all presented and controlled in very simplistic manner, making it an ideal game to relax to or embark on in a very casual setting.

Overall, Dungeon Village provides a satisfactory experience in its role-playing world of building, outfitting, maintaining and ensuring the safety of your heroes as they embark on a series of quests. In short, the game’s style follows a god-like type of game, where you input your ideas when necessary, then sit back and watch life go by. In terms of challenge, it can be a game that is a little too easy to succeed, but its real beauty lies in its charms and laid-back offerings, as well as its alluring mechanic in building a reputation for your masterpiece. There are question marks over its longevity and replay values, but while it lasts, this is one of the most pleasing and satisfying games that you’ll play on your switch this year.

A charming title that really entertains while it lasts, but once you’ve seen everything that it has to offer, there’s little to force a return.