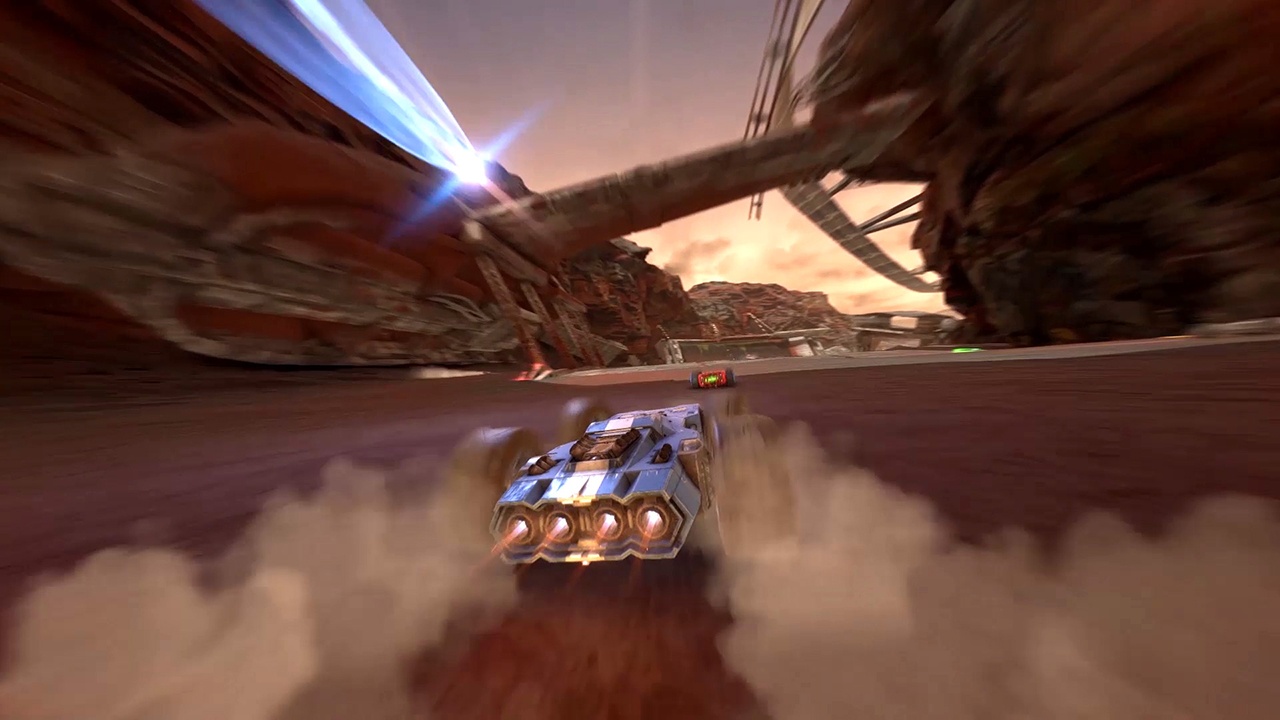 There are a lot of reasons why we all play video games. Some of us like to relax, others delve deep into stories of lore, while some like to be adventure hunters, dogs of war, wannabe pop stars and last of all, adrenaline junkies. You can usually find a game to suit your style of mood within the expansive library of the Nintendo Switch. However, when it comes to high-octane thrills and spills, you may left feeling a bit deflated. Well, fear not any longer, as Caged Elements’ GRIP: Combat Racing is burning a release on the Nintendo Switch and boy, is it one hell of a ride.

Published through Wired Productions, this high-octane, seat-of-your-pants drive-by sees you competing over a series of events, including twenty-two race tracks over four distinct and hostile environments, battling alone or in teams over five arena-based combat maps and beating the clock in nineteen point-to-point ‘Carkour’ runs. Whatever mode you delve into, you’re guaranteed a blistering run, whether you choose to play solo, in local multiplayer for up to four players or simply take the fight online with ten other competitors.

As well as a host of game modes and play styles, GRIP: Combat Racing also boasts a variety of fifteen different vehicles, an arsenal of nine outlandish weapons and power-ups, plus a whole host of personalisation options to make your car your very own. However, dig deeper within each of the various modes on offer and you’ll unveil even more variations on the modes’ core themes, such as classical racing, elimination races, time trials, deathmatches, stealing the stash, time bombs and much, much more. Once you get into the mechanics of the game, its content is simply staggering, ensuring that this is a title that accelerates to a form longevity rarely seen on Nintendo’s console. 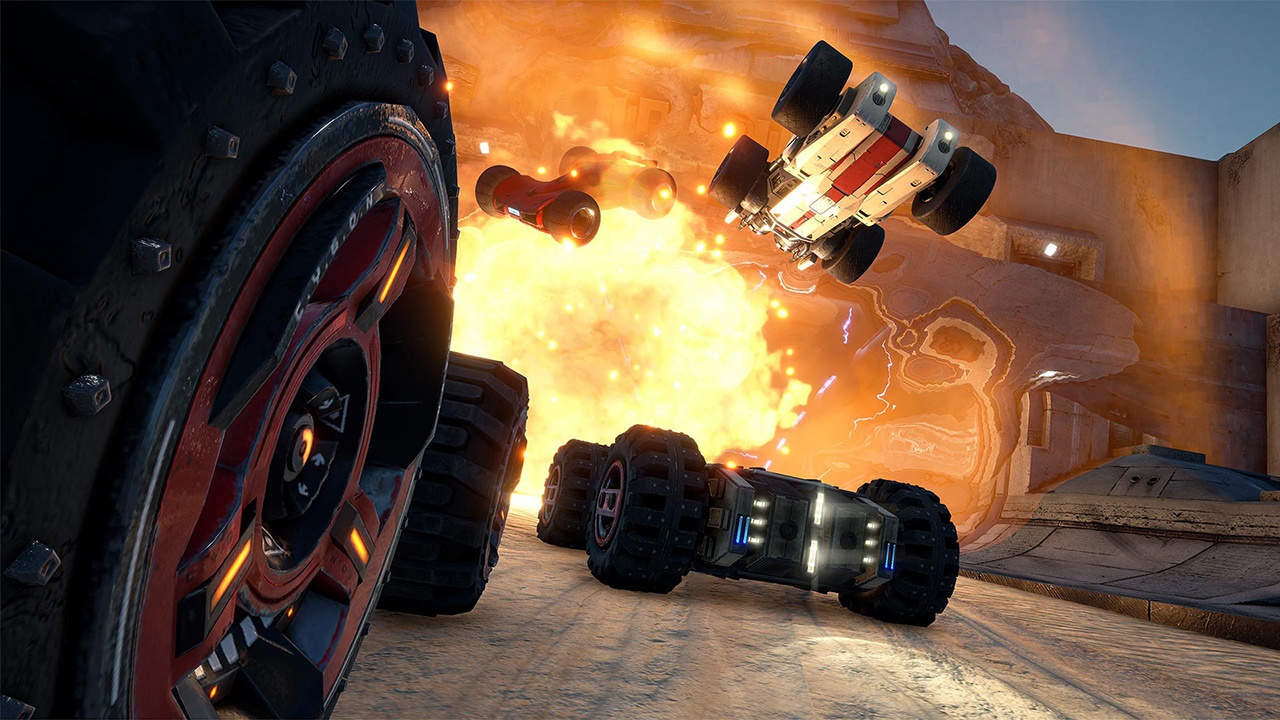 Running on the fourth iteration of the unreal engine, GRIP looks simply staggering; whether you play in docked mode or hand-held. It may not be on-par with its brethren on the bigger consoles, but for a portable game, the level of detail here is very impressive indeed; but that’s not all that this game contains underneath its hood. The pace in which the game runs is blistering, making it the fastest game available for the Switch at present. If you ever needed a showcase to show what Nintendo’s machine is capable of, then you’ll find it all here. Saying that though, although performance is stellar in this production, it wasn’t without the odd hiccup, mainly in a couple of instances where the sound became temporarily jittery a couple of times; it’s only a small matter and in no way detrimental, but it’s still there.

The main premise of the game involves racing However, some crazy level designs, unrelenting speed and combat make these much more than just your usual racing affair; in fact, I’d even throw my hat in there and say that this is a game that makes Mario Kart 8 decidedly tame. For the single-player, there’s a lot to get your teeth into, with a series of single-races, custom tournaments and arena battles; all of which are fully customisable in a variety of ways. There’s also a campaign mode that gently introduces you to everything that the game has to offer. All of these modes contain a variety of mechanics, such as competitor numbers, racing styles and objectives.

The racing itself is an absolutely jaw-dropping experience. Your vehicles and each of the levels have been designed so that it’s not just your run-of-mill tyres to the tarmac racing affair. If you’re not twisting around the walls, you’re gripping upon the ceiling, if you’re not suspended, then you’re flipping this way and that way; all under the combat conditions of eliminating your opponents or defending yourself. When I say it’s a high-octane ride, I mean it’s a high-octane ride. Its control scheme is easily implemented, with the ZL and ZR buttons mapped to speed control, L and R mapped to left and right weaponry and power-ups; whilst steering is performed with the left thumbstick. The face buttons and D-pad controls can be used for camera adjustments, boosts, drifting and target switches, but I didn’t find them to be a necessity; although this largely varies from mode to mode. You can also change the control scheme within the options menu, which is a nice touch. The handling mechanics though, can be a bit fiddly, mainly due to the speed of the game and the hazards that line each level, but it’s by no means a broken experience. 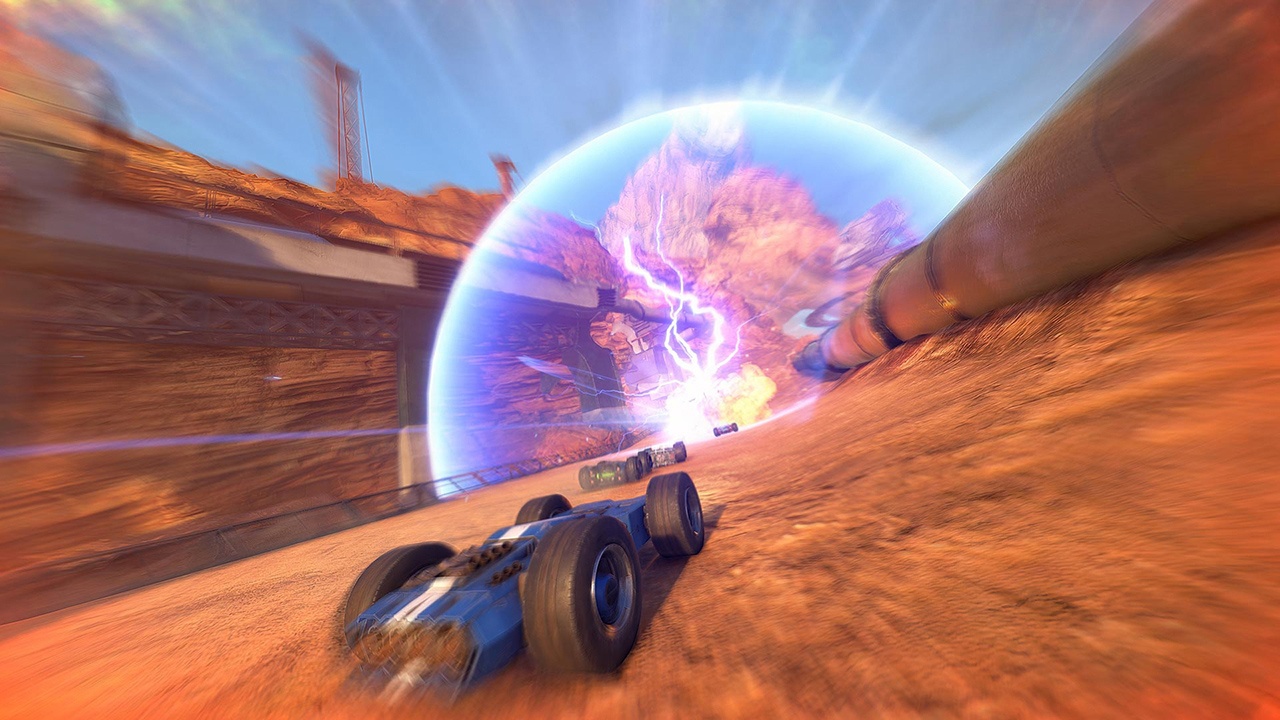 Its other game modes, such as the arena styles and Carkour offer different variations in their play-styles. Arena battles take place within large arenas, rather than race tracks. Each are full of power-ups and obstacles which you collect and traverse as you play in variety of modes from last-man standing, a capture-the-flag style and an explosive mode where you need to avoid the blast from thermobaric bombs where the last car driving wins. Although they don’t match the urgency of the racing, these modes are still great fun to play. Carkour involves driving around a course full of twists, turns, loops and jumps which you to need to navigate your way around, whilst picking up a series of collectibles in the fastest time possible. Although still fun, this was probably the weakest mode for me, but that’s more of a personal view.

As well as its ability to cater for the solo player, all of its racing and arena modes can be played in multiplayer too; both offline and online. Offline uses a split-screen mechanic, with each player using one joy-con each. The control scheme maps well to the use of a single joy-con and, despite its blistering pace, I didn’t come across any significant slow-down with four of us tearing up the race track. However, this local mode can only be played with the Switch docked. Unfortunately, it’s just too much for our beloved machines to handle in handheld. Online caters for up to ten players, with a variety of options and lobbies to cater for all tastes and playstyles. Alas, I was unable to find any games during my testing of this game, so can’t possibly comment on how it plays. All I can say though is, this game has the potential to one of the best multiplayer games on the Switch, so I’ll keep my fingers crossed that its lobbies begin to fill up soon.

Overall, GRIP: Combat Racing is easily one of the best games available on the Switch right now, and a perfect showcase for what Nintendo’s machine is capable of running and producing. Yes, it may be a little rough around the edges when compared to other versions, but to have a game running like this in a portable fashion is a real achievement. In terms of speed and playability, this is the closest thing to Wipeout that you’ll find for the Switch. Its pace is absolutely blistering, it’s challenge is finely balanced and it contains fun by the bucket load. With its personalisation options and a wealth of content, both in single and multiplayer modes, there is enough here to keep you invested in the long-term and in terms of its pricing, makes this a game that is an absolute steal. In short, it may not be perfect but it’s pretty damn close to it and if you’re looking for a high-octane, adrenaline-fuelled ride into oblivion, as well as one of the Switch’s best experiences, then this is it.

A blistering racing game that is so adrenaline-fuelled, it simply kept me gripped to my controller.