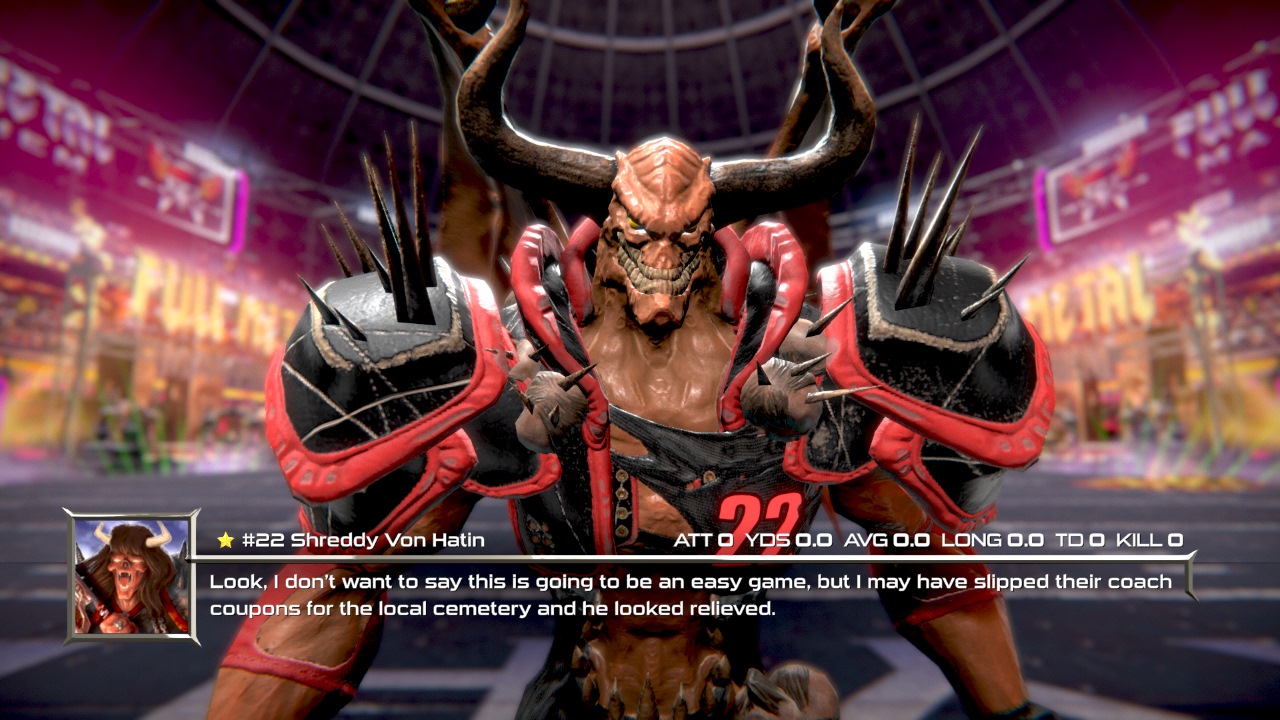 It’s funny how in the UK, they think that American football is a rough sport, yet in America they think that rugby is particularly physical. Well, Have you ever seen Australian rules football? Now that’s what you call a blood sport. However, none of the above can hold the pace when it comes to Mutant Football League: Dynasty Edition as it tackles a release onto the Nintendo Switch.

Developed and published by Digital Dreams, this gridiron game takes the general premise of American football and mixes it up with a host of mutated players, as well as a series of decidedly deadly dirty-tricks and on-field obstacles to produce a blood-bath of footballing mayhem. Instead of containing a line-up of multi-million dollar superstars, you play with teams that comprise of beastly forms such as vampires, werewolves, skeletons and a whole host of demonic deities. However, there is a take on its real-life counterpart, with the player names such as Airborne Dodgers replacing Aaron Rodgers and the Green Bay Packers being the Grim Bay Attackers; but that’s as close as this title comes to replicating the sport it is based on.

Rather than a full line up of eleven versus eleven, Mutant Football League has decided to make things decidedly easier with its seven versus seven matches. This allows much more freedom of expression on the pitch, as well creating more of a focus on gameplay, rather than tactical decision-making. It creates a much more arcade style of play, with an abundance of scoring opportunities and quick matches that make it an ideal game in a casual capacity. It’s a sublimely easy game to jump in and start playing, although it does help if you possess a basic knowledge of the sport. If not, then the game does contain a tutorial that explains the different line-ups and player abilities to make sure you get a feel for the different mechanics under which it plays. 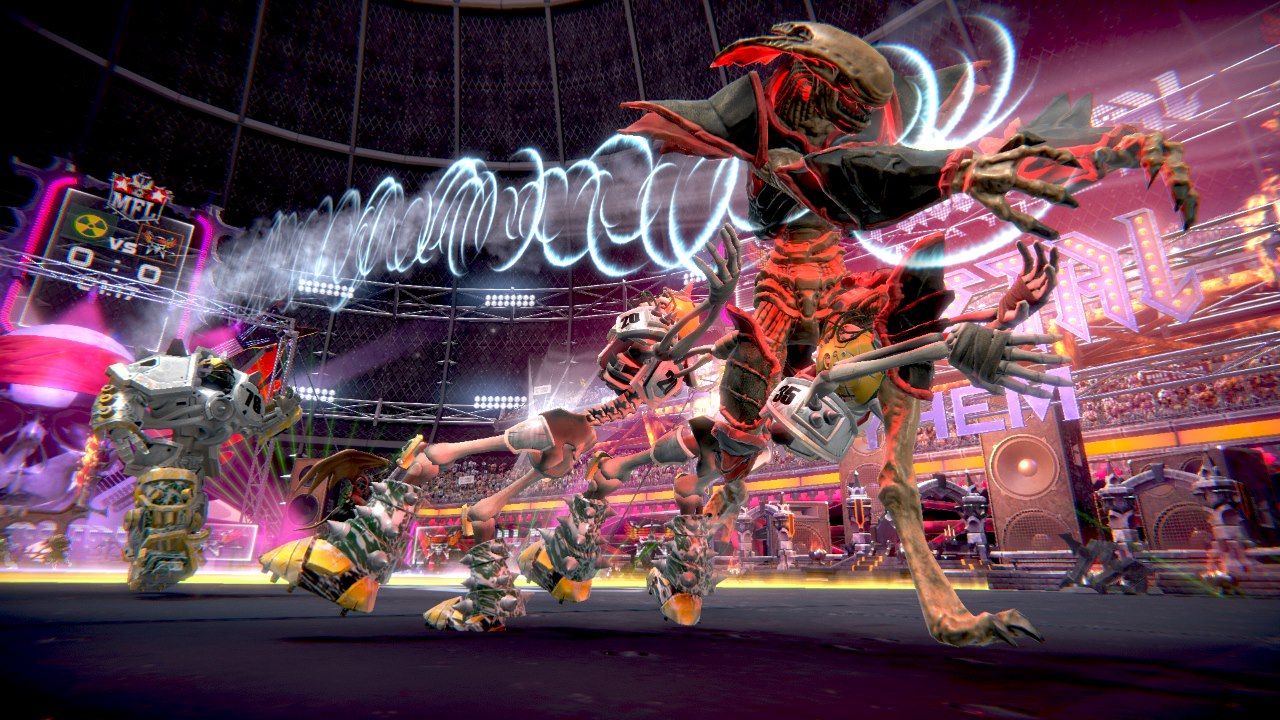 In terms of how it plays and controls, it contains an easy scheme to enhance its arcade style of play. However, should you be Madden vet, then this game plays in a very similar way, thus increasing its accessibility. Where this game differs though, is in its gratuitous violence; in fact, the game actively encourages it. The pacing of the game, or in particular, the players themselves, invites you to play as dirty as possible. With a limited running speed, as well as a limit to your speed boosting, it can leave you or your opponent vulnerable to some pretty stiff challenges. Punches and body slams are abundant, even after the ball has been played or after a tackle.

Over time, these tackles leave damage on the players, eventually leading to injuries and even death; something that happens regularly within matches. This is made even more prevalent with the use of ‘dirty tricks’; an element of the gameplay that allows you to turn the tide of the match, whether it be bribing the match officials or re-winding time to make your last touchdown a null. It’s a fun premise that adds an extra layer of competitiveness. However, although novel at first, these are elements of the game that can become frustrating eventually, especially when playing against AI opponents who have a tendency to play dirty when you’re about to win the game.

Admittedly, it makes the game more interesting when playing locally or online. There’s something quite satisfying in turning your linebacker into a hulking giant and running rampage around the pitch. However, these aren’t the only hazards that you have to be aware of, as each of the pitches contain a myriad of deathly traps to bring a sense of unpredictability to every game. At seemingly random moments, traps appear such as deep holes or rotating buzz-saws that change the way you play. All of these elements combine to produce a literal blood-bath upon the pitch, whether initiated intentionally or from being caught within one of the may hazards. It all adds an element of fun as you never know what may happen next. 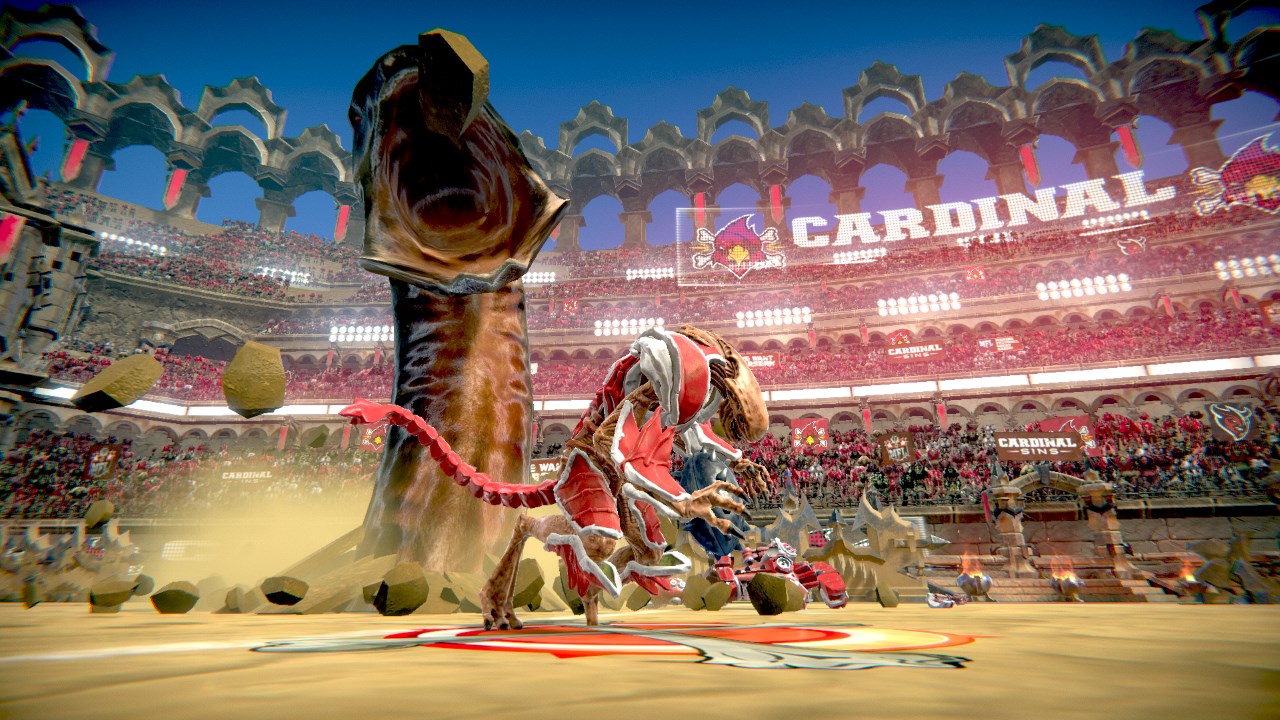 In terms of content, Mutant Football League contains a wealth of play options; especially with the new features of this dynasty edition. The dynasty mode contains a managerial career mode, where you manage one of the teams available and steer them to glory. As well as this, you can also play quick matches, training games, playoffs and a full season mode. There’s even a fair amount of personalisation to make each team your own. You can even play online which runs smoothly and provides an extra element to the gameplay. It provides a nice variance in the game options, although the general premise of the main core in gameplay remains the same; with the exception of the new dynasty mode.

Presentation wise, the game contains a nice aesthetic, with detailed stadiums and character models, although there is a touch of blurriness to some of the textures and the camera felt a little too detached from the action for my liking. However, it all runs at a smooth pace. Saying that though, I did come across a few technical problems, mainly with the game freezing and forcing me to quit and start over again. It didn’t happen all of the time, but did so in a frequency that did frustrate eventually. Hopefully it’s a problem that can be eradicated soon with some patching. Commentators give a description of each match as they play, although a limited vocabulary does repeat quite often and soon becomes tiresome.

Overall though, Mutant Football League: Dynasty Edition does provide some good instances of entertainment; particularly when playing locally with friends or family and online. The unpredictable nature of each match, as well as the ability to implement bone-crushing moves provides a nice take on the premise of American Football. It’s an easily accessible game that controls in a simplistic, yet effective manner that makes the gameplay flow with a smoothness. Online play too is equally seamless and I had no problems in finding matches to play. A few technical problems though can hamper the game somewhat, but hopefully these can be sorted soon, if not already by the time you read this review. It may not be perfect and it may not be Madden, but it most certainly is mad.

It may not be Madden, but it’s most certainly mad.