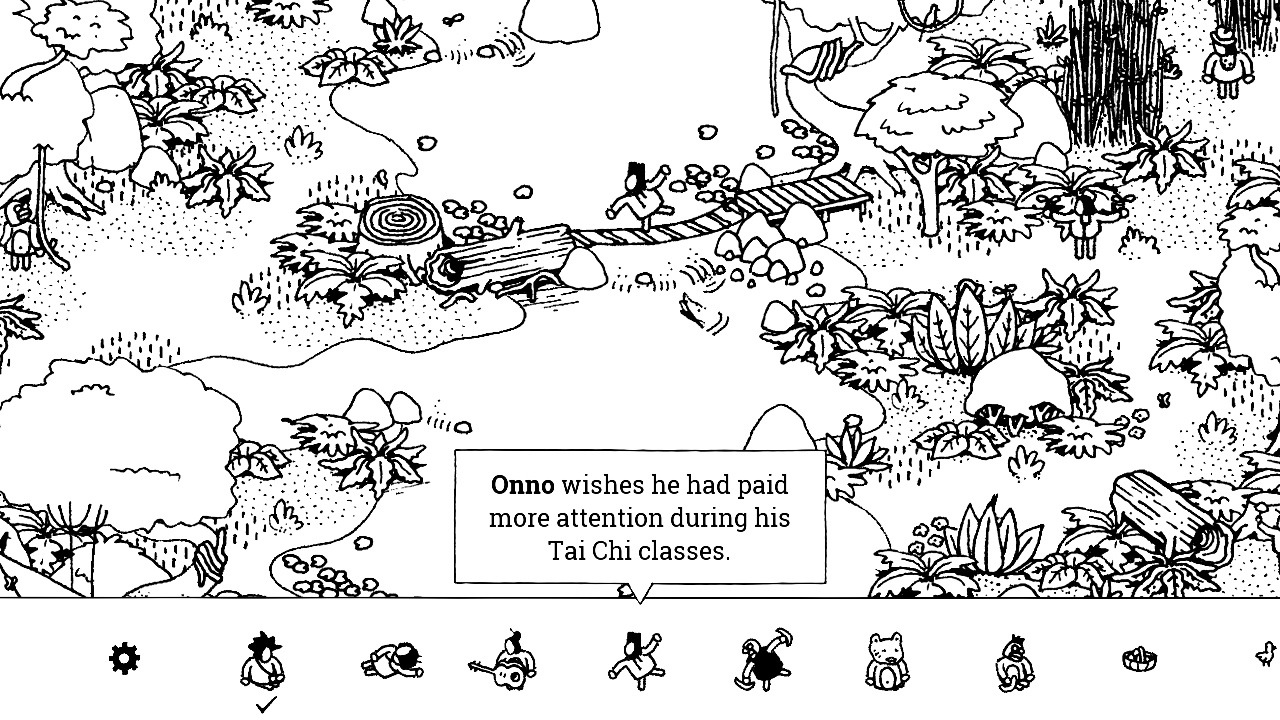 Sometimes a wonderful little experience comes into your reality and you simply need to step up, embrace it, and acknowledge everything that it’s doing right. Far too often, we get swept up in games that have massive amounts of content, lifelike graphics, and online servers that span the globe and match close to 100 people at a time. But what about a game that takes something classic – hidden picture books – and adds a great element of technological interaction? A game that you can simply kick back and play one lazy Saturday afternoon when soccer practice is canceled and I’m tired of watching my kids play Paw Patrol.

Hidden Folks is a wonderfully simple but surprisingly detailed game from Adriaan de Jongh and Sylvain Tegroeg, two seemingly first time developers who’ve created a beautiful little project. In Hidden Folks, you’re presented with a black-and-white landscape in which a series of items must be sought out. Usually you have a few unique people avatars to find, along with a couple seemingly impossible objects. When I say seemingly impossible, it’s a daunting idea to look at a massive campground and expect to find a single banana. As soon as you find “enough” of something in a single stage, you can move onto the next one, or you can stay in an effort to seek out the remaining hidden objects. In truth, there are a couple of items (a sunbathing tortoise and a single mushroom in particular) that I never found, but I’m kind of excited that the doors are open to go back and find them again. 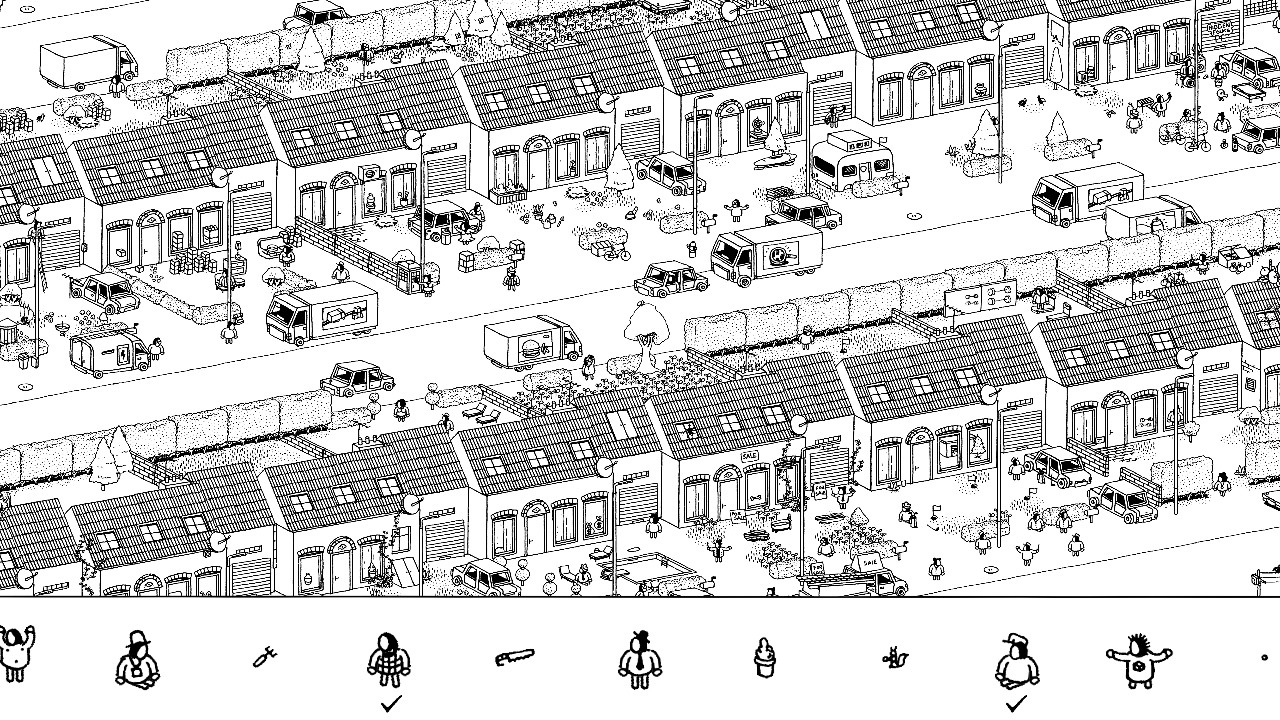 Unlike other hidden object games that have become very popular in recent years, Hidden Folks has zero overarching plotline or strangely dramatic tension lying about. In that regard, this feels much more like the Where’s Wally (or Waldo, for the US people) books of my childhood. The sheer density of what you need to comb through in order to figure out where the one person is who’s holding an axe instead of a twig is amazing, and it’s all done through careful, methodical, heavy drawing and creation of the landscape to appear unique and individual. The different items and characters move about in small, set patterns, from waving stalks in the wind to tiny walking paths that some characters may choose. You get a chance to see a bit more of this animation in action in some of the “side” missions, where you abandon the look and find routine and help a single character accomplish a task, such as walking from one end of the level to another. This effectively gives the player a better chance to use some controls they might not have tried before (grabbing and dragging, for example) to better set them up for future success.

As Hidden Folks progresses, the search for items and people becomes significantly harder, but never in a way that hits a wall of frustration. For example, in the first couple of areas, the maps are smaller and what you need to find is out in the open for the most part. But soon you need to learn how to manipulate the landscape: cut down tall grass, make flower grow, throw open tent flaps and check inside campers. There’s never a level that feels like “business as usual” because the game keeps you on your toes at least in regard to the how and not the why. In one stage, you have to find a black rabbit (or at least I had to, I don’t know if the checklist randomly changes) and there wasn’t a rabbit to be seen. Eventually, I realized that you could click on certain holes in the ground that were actually rabbit burrows, and the right one would, over time, produce the little black bunny. It’s really quite genius, and I was both elated and satisfied to find the hare.

The big win for Hidden Folks comes in three equal parts of style, atmosphere and execution. The controls of the game work great in either docked or handheld mode, and everything ends up feeling natural and smooth. You can zoom in and out from the screen, trying to get a larger or smaller scope on the exquisite mapping, and you shift between the “finding targets” with the greatest of ease. If, like me, you sometimes get frustrated and just start clicking on everything, the game will acknowledge that you’ve found one of the goals, even if it wasn’t the one you were intending on, and that’s a great little surprise. Hell, even the loading of the game provides exactly what I want in a title: it’s a damn cold opening, with zero splash screens or loads. The second you launch the software from the home screen, it drops you straight into the game, letting you get your sea legs without walking the dock first. 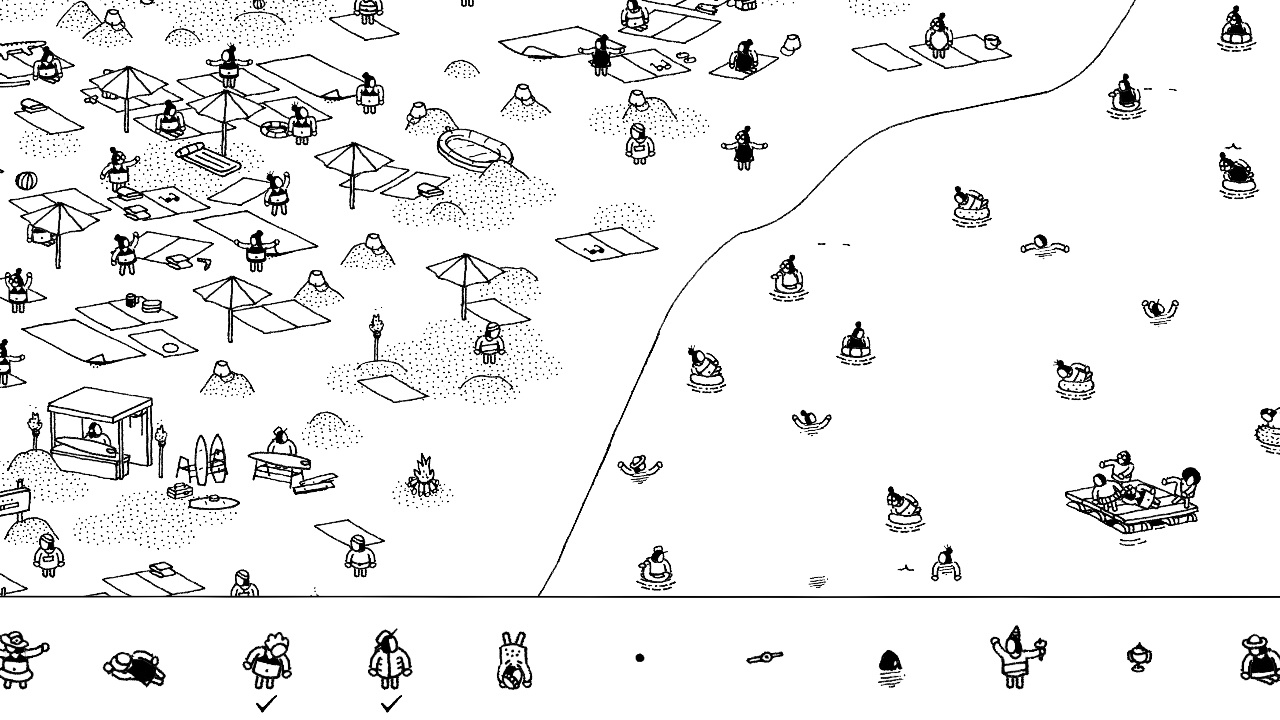 And, naturally, the sound and graphics of the game are positively lovely. Hidden Folks is drawn in this whimsical, almost childlike nature that still has an astonishing level of detail, especially considering how crude some of it might come across from an initial view. All the little Folks who run around are endearing, with different hair styles, clothes, accessories and mannerisms to help best match their position in the game. While you’re looking around, it’s easy to get a bit fascinated to find out all the secrets, like what they may have decided to bury in some places, what’s hiding in the outhouse, what’s on top of the car in those massive roof rack travel compartments. When you click on things, nearly everything has a little noise or sound clip to go along with it, much to the delight of my children. None of it is professional and it all sound original, from a light “boop” noise for flowers to a hilariously petite growl on an alligator I found. There’s such whimsy that you almost feel like it might get saccharine and silly, but you are too busy trying to figure out which of the blooming flowers that you’re currently growing will be the lucky flower you need to complete the stage and move on.

There’s no time limit, no score, no online leaderboards and nothing better than staring at this monochromatic wonderland in an attempt to find one sleeping Folk who is also wearing a hat. This game might seem silly and simple, but you’d be stunned by how much time I’ve invested into this title, on my Switch, in just the past couple of days. You’ll have a blast and maybe feel some stress of the long week melt off in the process. Don’t let this jaunty game stay Hidden: give it a chance.

Absolutely amazing in terms of detail and dedication, Hidden Folks is the best HOG I’ve played in forever, probably because it’s not a HOG.