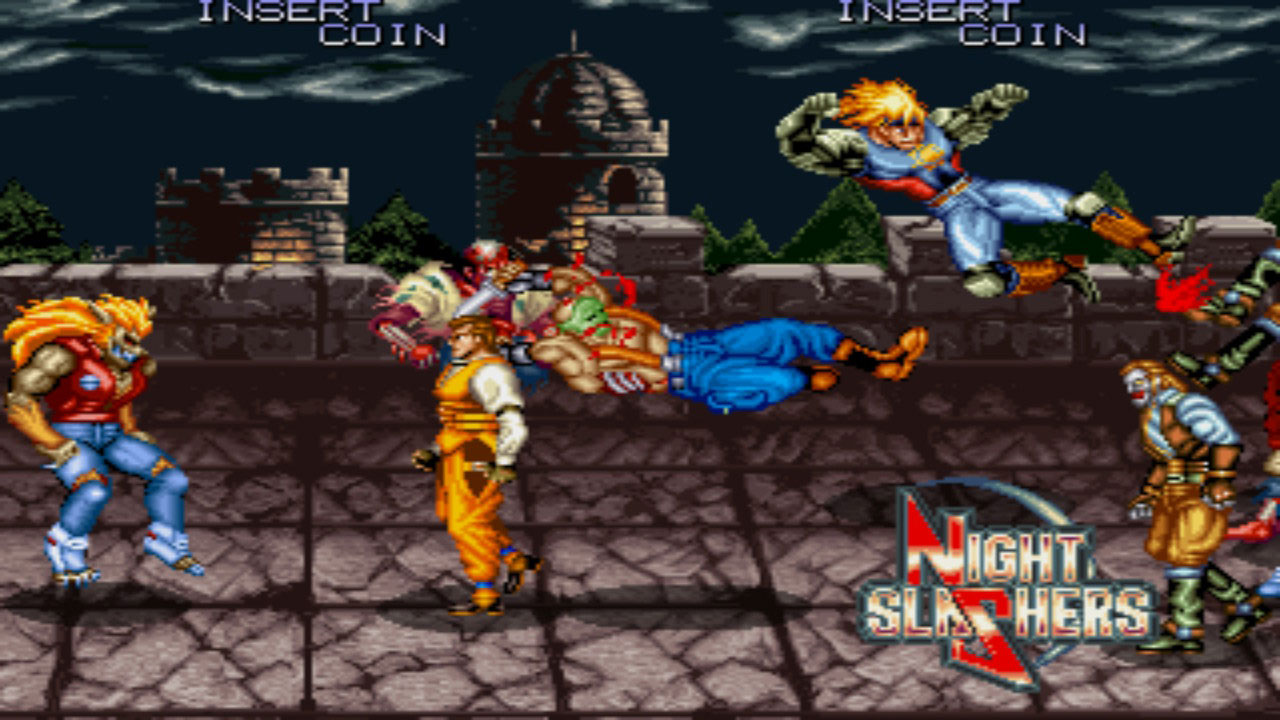 People who enjoy playing video games are living their best lives right now. Not only are there a ton of consoles that have incredibly competitive prices (especially compared to the inflation adjustments of decades gone by), there are literally thousands of free, polished, good games available on the PC, ranging from simple puzzle games to eSport leagues that have a free buy in and tournaments that could easily be a career. So it’s not surprising that good, even great titles go unnoticed by the masses at large simply because there are so many. But that’s not a new problem: whereas we have too many games now, we simply didn’t have enough access to games back in the day. You couldn’t count on what an arcade would and wouldn’t carry, and even your local rental shop couldn’t promise to have every single SNES cart available. So I’m not shocked that I had never played or even heard of Night Slashers, I think I’m just bummed I didn’t discover it back when I was younger.

Night Slashers, the newest combatant for the Johnny Turbo and Flying Tiger tribe, is a side scrolling beat-em-up of hilarious premise, in which three monster hunters are alerted to one King Zarutz, who is attempting to take over the world with his demonic army and turn everyone into zombies. Naturally, the trio that is Jake the Psychic Cyborg, Zhao Hong Hua the martial artist and Christopher the…dude aren’t going to simply let this happen. Using their amazing elemental powers and the sheer brute force of being a good guy, you and up to two other friends will use fists, feet and fury to stop this madness. Get ready for completely unnecessary amounts of blood and violence as you take on classic villains like Dracula, the Mummy, Frankenstein’s Monster and the Grim Reaper himself. Who isn’t even the final boss. Which means the game is saying that King Zarutz is more powerful than Death, but whatever, it’s a game, let’s go with it. 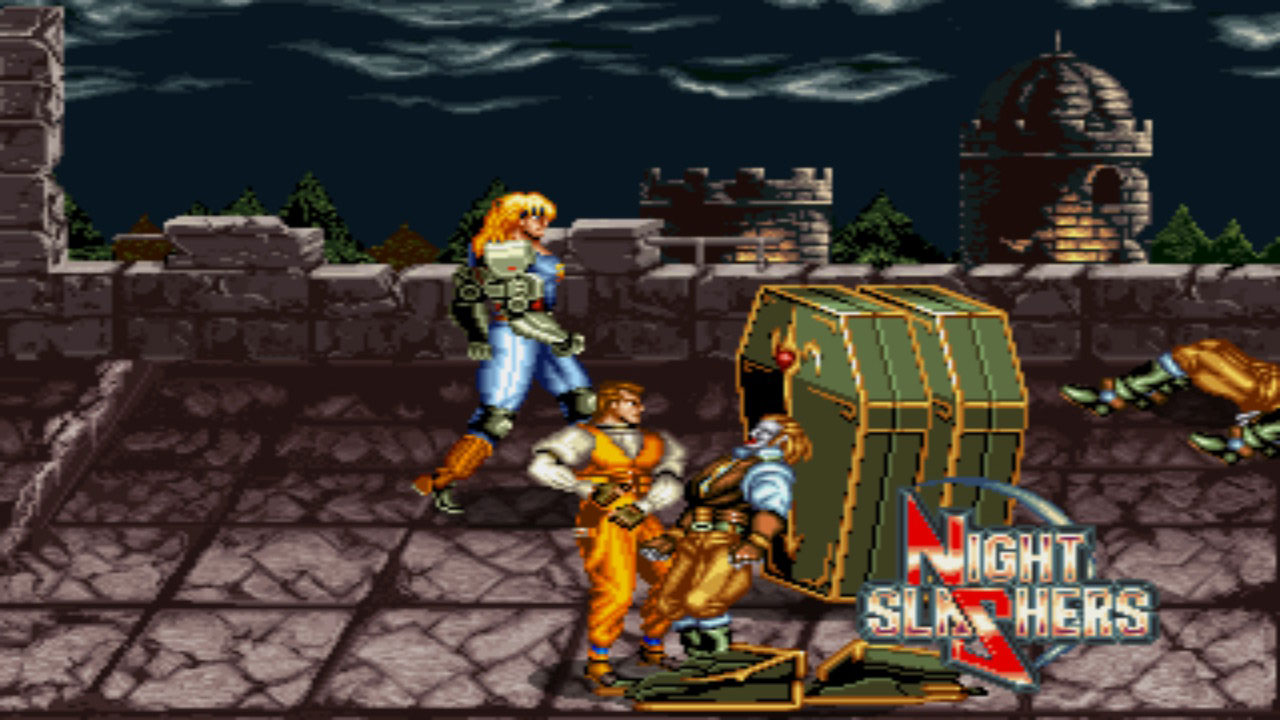 As a side scrolling beat-em-up, Night Slashers, out the gate, has a ton to offer in terms of excitement and replayability. Firstly, the characters really do each have their own style to bring to the game. Zhao is crazy fast compared to her male counterparts and does a decent amount of damage with her elemental attack of fire, though she’s hamstrung by her normal punches doing a mediocre amount of damage. Jake moves like a tank and hits like one too, and has one of the more brutal moves where he pounds an enemy into the ground (very cartoonish) and then stamps them in the face repeatedly (not cartoonish at all). Christopher really rides right down the center, not really exciting either end of the spectrum but being a good balance character if you’re doing or three player co-op, and his elemental can potentially freeze enemies and make clearing the room easier. Not only does each character have a one-time use elemental attack that’ll clear the room for the most part, but they can do a charged up standard strike that you wouldn’t know from the button explanation at the beginning. These charged up strikes can really make a difference, because they take a moment to power up but can also provide breathing room during boss fights.

The enemies of Night Slasher and their appearance on the screen really make it for me. Most of the beat-em-ups from the 90s seemed to go in two different directions, either “punch street thugs and gangsters” or “punch street robots and mutants.” This is one of the few games that really has a strong horror theme to it without being a “horror” game. Sure, yes, I’m fighting zombies and masked knife wielders who are definitely not Jason, but the soundtrack is the traditional rock and roll electronic riffs of the time, and you’re more focused on grabbing things to pick up and throw in order to clear the room. The zombies are the most prevalent grunts due to the whole “trying to turn the world undead” plot, but they never get old and never get simple. There are quite a few flavors of zombies, from almost completely intact to visibly decaying and missing skin, and they all shamble at you in equal measure. When you punch one, you usually get a nice chunk of blood (and I mean chunk, it flies out in a solid cloud) and beating one to finish usually results in a quick disintegrating animation with flesh and bone just dissolving. It’s gory, but it’s not done with the polish you’d expect from games at the time: mothers were still up in arms over Mortal Kombat and somehow forgot to panic about this one. 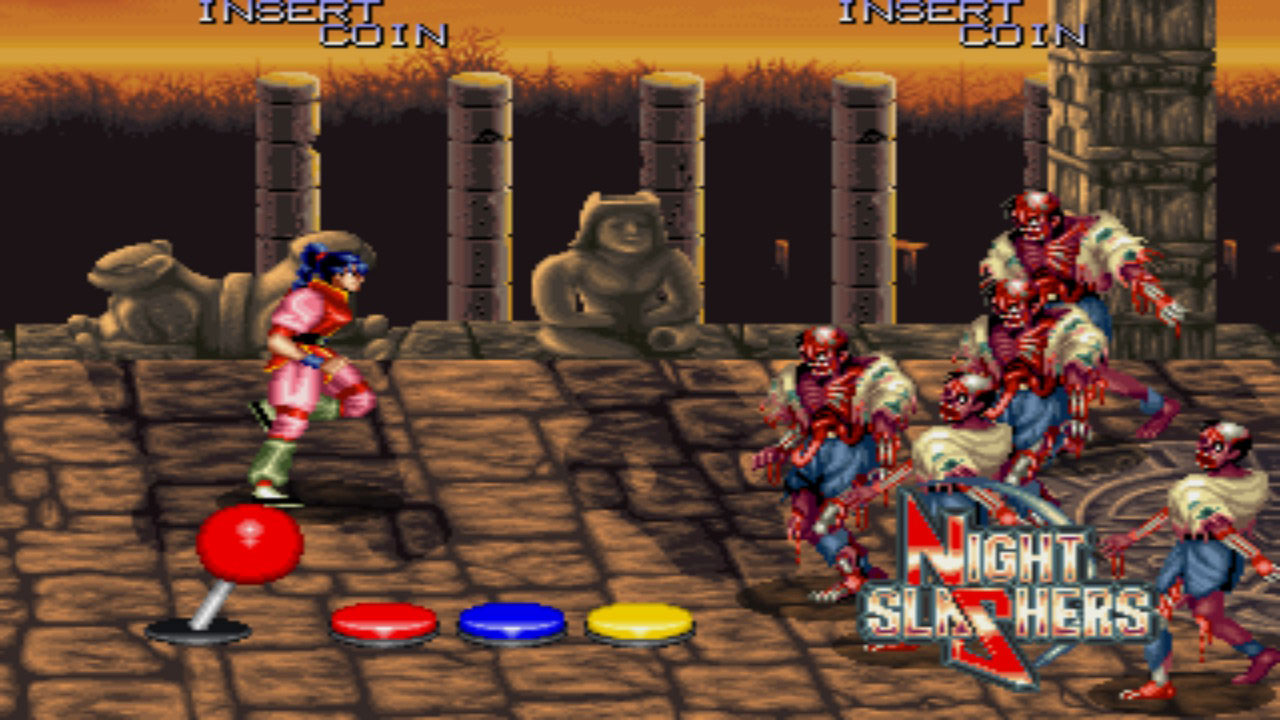 Like all good beat-em-ups, the fighting is what really makes or breaks Night Slashers, and I’d say there’s a distinct “make” feeling, or, rather, the fighting is damn good. After coming off of Bad Dudes vs DragonNinja and Two Crude Dudes, it’s almost refreshing to see the variety that Night Slashers allows you to utilize with such simple button layouts. There are your punches, there are flying kicks and leaps, there are charge up attacks, grapples, pick ups and throws, and the room sweepers in the elemental attacks. When you do things right, Jake can stun a zombie, grab it in a bear hug, walk across the room and then suplex it into other grunts, getting close to four birds with one other bird. There’s strategy here, and it’s not just because the game is using some heavy influence from Final Fight either. The AI is fairly aggressive throughout the game, with the minor enemies not waiting to assault you and the bosses straight up having erratic and fast attack patterns. There’s a point where you’re on a pyramid, fighting twin tag-team wrestler zombies, and you seriously need to keep them both in consideration at all times. One will rush you while the other prepares a flying kick behind you, and you’ll get nailed by both. Still, if you get the patterns down, you’ll be in a good spot.

The best thing for me about Night Slashers is that it’s just a bit longer than the other brawlers I’ve played in recent memories. I get that most of these arcade games needed to be short enough so that kids could grind out with quarters and potentially accomplish the whole thing while mom finished doing laundry or shopping, but it sometimes felt cheap that I could bang everything out in close to 20 minutes or less. Night Slashers definitely has a large number of worlds and bosses, and I think I clocked double the average play time – closer to 45 minutes. While that’s crazy short compared to the average console release, it feels perfect for the world of Night Slashers. In the time it takes to be disappointed one episode of Below Deck (JUST FIRE RHYLEE), I could start-up the game, punch my way through every Universal Studios Monster ever, and then see the credits role and Jake bemoan the fact that he’s broke and needs to go fight more monsters. Like, dude, it’s called a Roth IRA: invest in your future, you can’t fight the dead forever.

Night Slashers is a fantastic, fun and flexible brawler that really brings a lot to the table in terms of style, execution and difficulty. While some people might be turned off by the grotesque effects or the fact that the Grim Reaper desicates in front of you, I had a grand time and deeply enjoyed my play. Don’t sleep on this one, or you’ll probably wake up a zombie, and then get punched by a cyborg.

Night Slashers is a perfect capsule of arcade gaming in the 90s: bloody, nonsensical, downright confusing, but so incredibly entertaining alone or with friends.