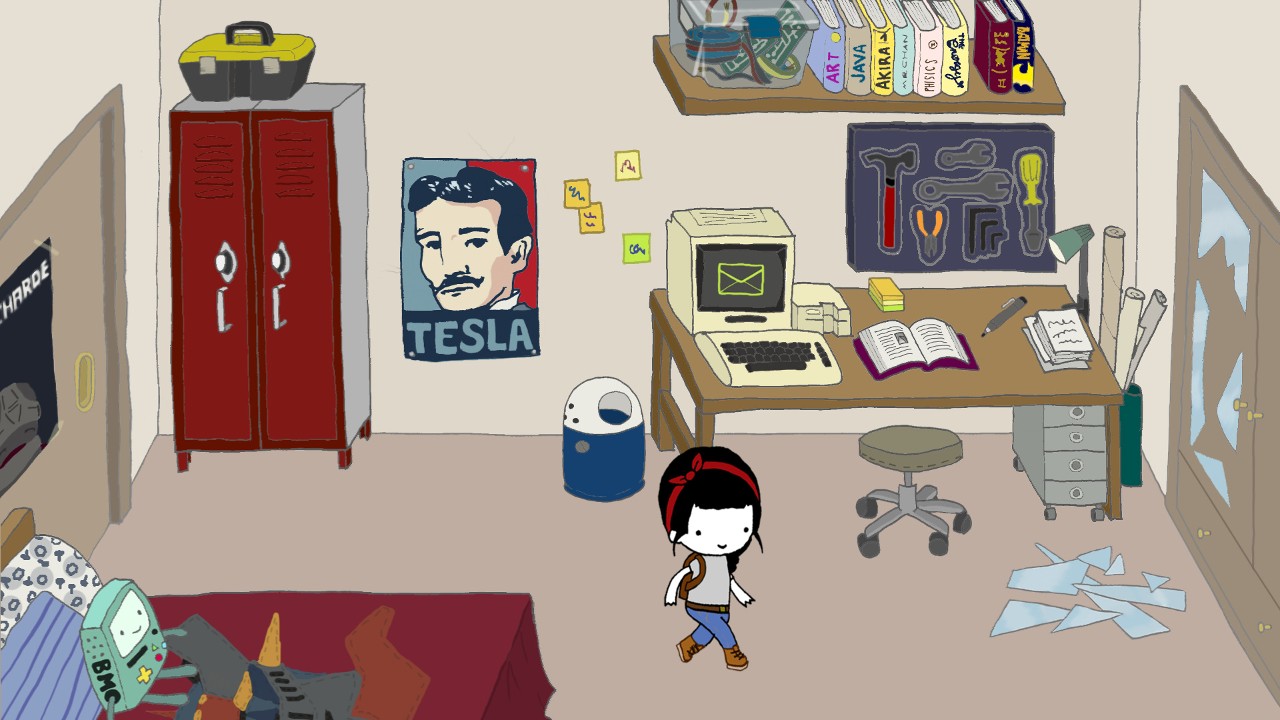 The trope of evil genius (or even regular genius) kids has been kicking around for a while, and I think that it’s both getting better and wearing thin in the same breath. On the one hand, Boss Baby was substantially better than I thought, and light years ahead of Baby Geniuses in terms of not making me hate children. That’s also the product of good writing and some solid voice acting, however. Stewie Griffin has been swinging wildly between “decent deadpan humor” and “oh great, another weird gay joke” for close to a fifteen years now (it’s seriously been that long), and you can’t have a kids show, educational or otherwise, without at least one toddler secretly being a MENSA member. So MechaNika has some strikes against it from the very start simply because I’m over it, but I’m not totally over 18+ humor in a childish fashion, so let’s see how it goes.

Nika is already a fairly interesting character from the beginning. She’s smart, she’s cynical, and she’s a functioning alcoholic, only one of which I could say was true for me at seven. She seems to have a serious grudge against the world at large, but that mostly takes the form of teachers who do terrible work and parents who don’t understand her. Oh, and I guess a few older people who also look down on her, but that’s seriously it in the grand scheme of things. Anyways, Nika has had enough, and is finally installing her master plan to build a robot of massive destructive properties, aka MechaNika. Oddly, she’s had the plan lying around for a while now, and finally getting suspended for a week for spray painting a bathroom stall was the catalyst she needed to get going and make this doomsday robot. In her own words, the robot isn’t going to kill everyone, just everything that isn’t awesome. Because I trust a seven-year old to have a proper gauge of what’s awesome and what’ll still be interesting to her in literally a years time. But that’s our plot and ambition in this loopy, funny but kind of broken point and click adventure.

The main premise of the game is gathering the materials needed to make your robotic suit, MechaNika, and you do so by every single go-to action in a point and click adventure. You find stuff, you bring stuff to other people, you use stuff with other stuff, and you ultimately use the stuff in a grand collection. Everything is set up from Nika’a bag, from the USB jump drive that signifies the save action to the flask of cocoa and cognac that acts as a hint system. If you seriously don’t know what to do next in a certain area, go ahead and get lit up temporarily and Nika will have clarity when she comes back down. Most of the time, as long as you can follow certain logic and reasoning, you should be able to find most of what you need through dialogue cues and reading descriptions. Theoretically, if you memorized the if/then of item combinations in the game, you could probably blaze through in close to 45 minutes. As it stands, MechaNika will give you a little over two hours with reading and conversation trees. 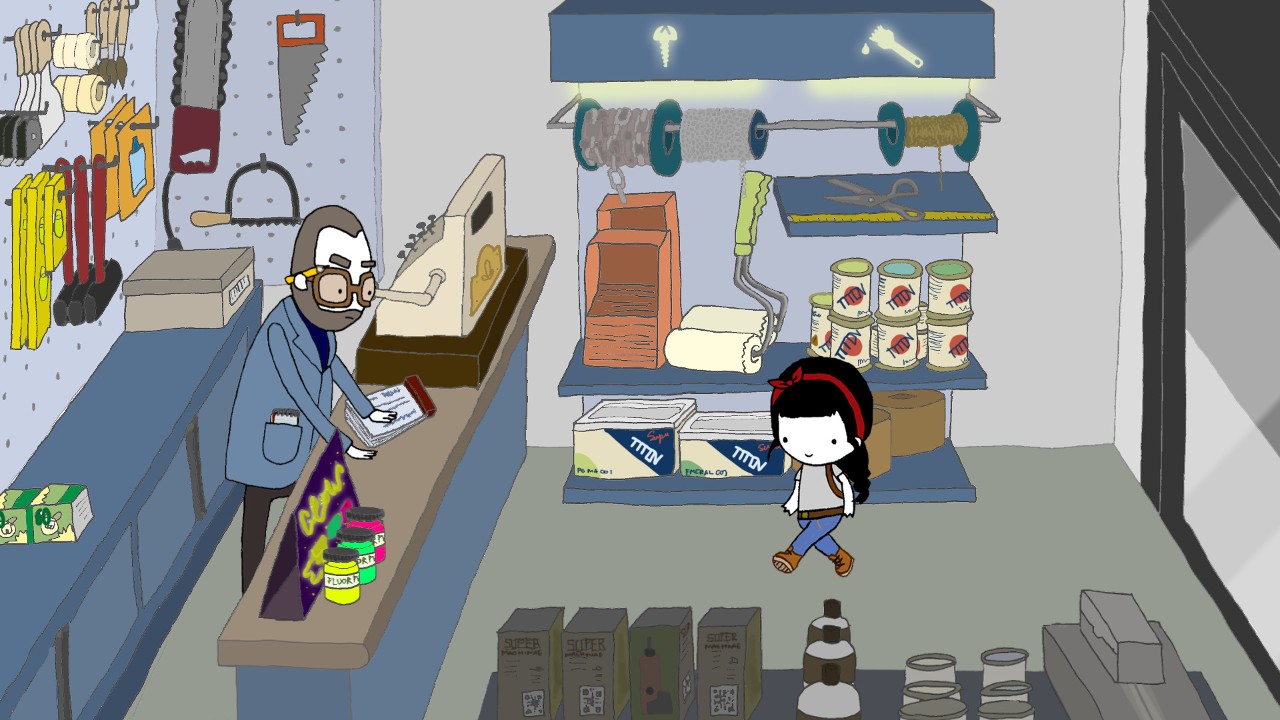 There are some great points to MechaNika. Firstly, the humor is there, as dry and pessimistic as it can be. Nika is seriously a complex character, fluctuating between angry and angsty and then being almost cheerful and whimsical. She’s hellbent on creating this robot, but she also likes to talk to people and compliment her friend Agnes’ t-shirt. Every child in the game seems to have something “adult” and broken about them, starting in the school yard where the trench coated kid deals arms in exchange for goods and the breakdancers sometimes wear sweater vests and slacks to get the best moves. There are some genuinely funny interactions, like the conversation that Nika has with a grumpy construction foreman, and also some sweet sections, like Nika’s interactions with her grandmother (I mean, it’s ultimately self-serving, but let me have this moment). It’s a good thing the writing is solid, because, not only is that the most important part of non HOG point and clicks, but it helps to save some of the worse elements of the game.

Art and sound are par for the course in MechaNika. The drawing approach to characters and backgrounds is pretty simplistic, hedging more into a purposely low-key aesthetic in order to help better deliver the shocking elements, like alcohol consumption and the hookers that flash you in the dump. I think the automatic reaction to such a high rating on a game coupled with the warning of NUDITY makes people think you’re going to end up playing a sex sim or something equally deviant, but it’s seriously a matter of background importance that’s it’s a nonissue. Still, scaling things down to be less detailed probably also made it easier to laugh at it rather than be appalled. The music and atmospheric noises are alright, but there’s no voice work and nothing that really made me say “I need these track in my life!” It’s done, well done as it could be, but nothing stands out. 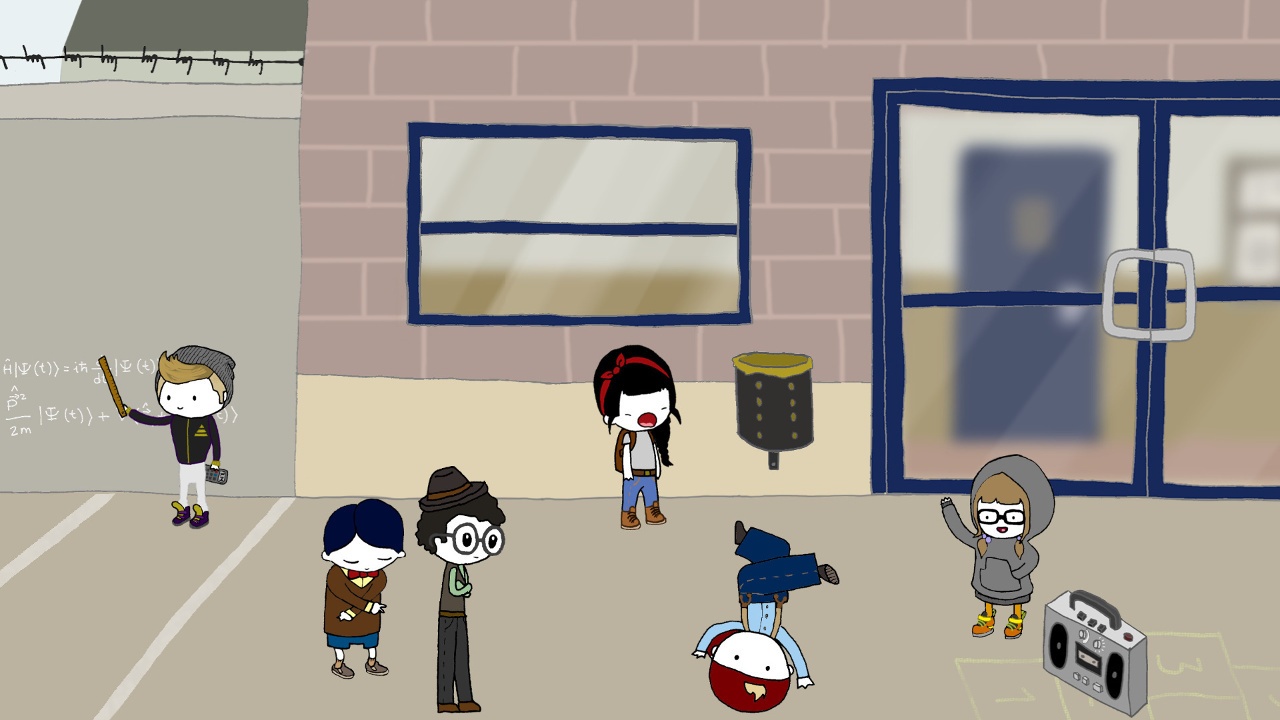 The biggest issue with MechaNika is the port to the Switch and how things were handled. In order to make it work as both handheld and docked, there’s a really weird balancing act of JoyCon manipulation and button placement. Using X as the interaction button doesn’t feel natural at all, and the cursor, which is moved with the right joystick, doesn’t feel like it floats at the right speed. You’re sometimes wonky in being able to get to items and click on them, and the hit boxes don’t result in misclicks to other items, but just missing entirely and thinking it’s not an interaction point. Strangely, using the JoyCons makes item manipulation significantly easier than handheld, where you need to work on a sort of drag/tap action on Nika herself in order to open the bag. On the other hand, moving around the environments and interacting with people and things is much more fluid with touch controls, so you have to decide what you’ll sacrifice in order to play best.

My only other thing is that Nika’s quest doesn’t feel organic or even logical. She’s kicked out of school for spray painting a toilet stall. Yea, great, she’s a genius and her teacher does, in fact, suck. There’s no disputing that. But vandalism is never an acceptable action, even if the tag was pretty dope. And she talks about finally going out and crushing everything not awesome, but, truth be told, she runs into and talks to a lot of seemingly pleasant and kind people in the course of her adventures. There are some moments during the quest for parts that help bolster her resolve to destroy it all, but I don’t feel like it’s nearly enough. Okay, the girls in Lolita dress were rude, and that one prostitute was planning some creepy shit, but Damon seemed like a cool dude, and you got to see an animal sacrificing cult! Why not just go with that? Maybe my interpretation of things was too broad and she really was going after just “not awesome” stuff, but Mango Protocol (the group that made this game) set up this chick to be a destroyer, and that’s how I interpreted it, and it didn’t quite sit well with me.

Overall, MechaNika has some funny, crass and mildly shocking gameplay that culminates in a cliffhanger for a sequel, which I might be interested to see if we get away from the point and click format. It’s a short little adventure, not bad in too many ways, but it is a pain in the ass to control on the Switch. My vote is to consider this if you like supporting smaller games and if you’re super into borderline absurdist humor. As for me, now that I know the ending, I don’t think MechaNika will make its way back into my halls again.