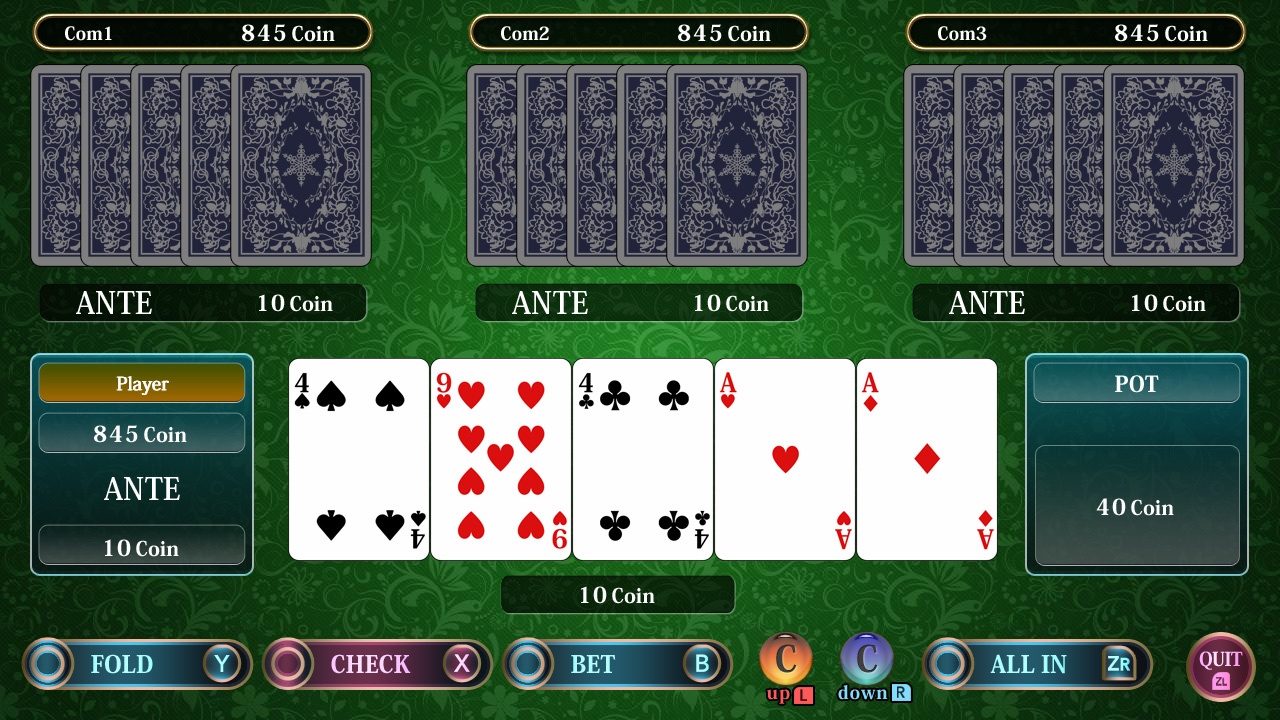 THE Card: Poker, Texas hold ‘em, Blackjack and Page One is probably one of the most honest games out there in terms of titles.  Everything you just read there is exactly what you’ll be seeing within. A single player entity, you have the options to play this particular game against the casino or against other players online. Full disclosure spoiler: I was never able to connect to play against anyone online, which I found a bit strange. I know that this isn’t a massive success title that was made by big names, but five bucks for a series of card games against a competent AI isn’t a bad deal. Still, I have to review this purely as a solo venture, so here we go.

If you have any idea how to play three of the four games listed above, congratulations, you’re the target audience for enjoying THE Card. You start the game by getting 1000 mysterious coins as currency from an unknown, unseen and unnamed benefactor, and, if you lose those coins, you gotta start over from the beginning. During initial hands of such, however, you can only bet 10 coins a go for a majority of the games: you won’t have to worry about losing cash fast unless you like playing poker like you’re donating to charity. As you win, you’ll get different rankings, your cache of coins will carry over between games (like a real casino), and you can unlock different card decks as achievements. As you might imagine, most of the achievements come from succeeding in the games and pulling certain hand combinations in poker, but be sure to check the How To menu. I just went there to figure out what the hell Page One is, and I ended up unlocking four different decks because I like winning at help manuals. 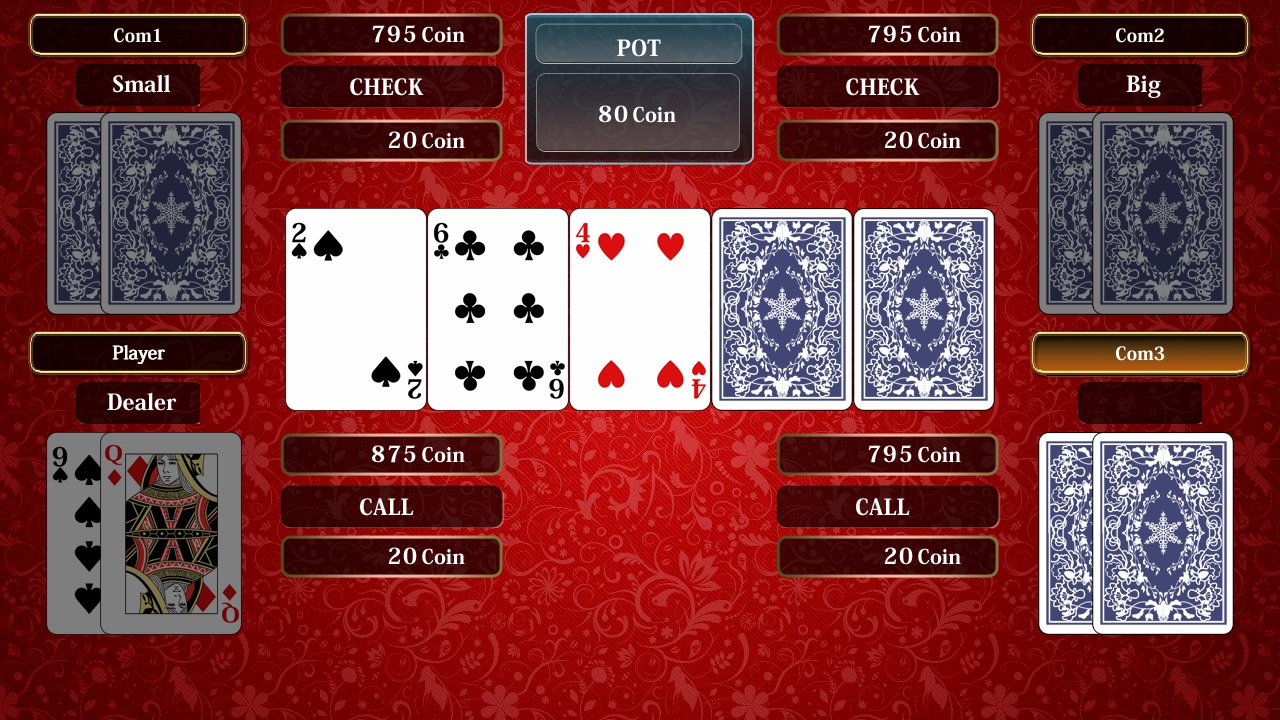 The Texas hold’em is probably the most straightforward place to play and to win coins if that’s your thing, because the AI is incredibly susceptible to bluffing. There is a bit of a twist, however: they only seem to fold as long as you have SOMETHING in your hand. Maybe it’s the way your robo self handles in the virtual world, but, every time I tried to bluff with just an ace high, they saw through me, called, and usually had three of a kind. But if all I had was a pair, somehow that made them nervous enough to drop out completely. You can do all the regular moves (check, call, raise) and you usually play five rounds with a champion declared at the end.

The five rounds and then champion aspect carries throughout all the different card games, and players might find it a little frustrating to continually need to restart their BlackJack streak in order to play consistently. Additionally, this five games reset is a pain in the ass for anyone who’s trying to count on card counting to get ahead in the game. Come to think of it, that was probably on purpose by D3 so that people couldn’t use their game to practice counting cards. But anyways, I like blackjack a ton, always have, and I don’t like needing to continually start over. There’s an option to change the number of rounds in the options setting, but that seems to affect all the games, and declaring a winner in Texas hold’em makes sense. Blackjack does not. C’mon, I just want to burn through my cash and pretend this is the only way to save the house after I lost my job. What? I like bleak casino scenes.

If you’ve never heard of Page One like I hadn’t, you’ll be interested to know that it’s hearts with no strategy or skill whatsoever. So someone plays the first card of any suit, and the winner is whoever then plays the highest card in that turn. If you don’t have anything of that suit, you MUST draw until you get something, which never, ever ends well. Eventually, you’ll get to declare that you’re almost done because you have one card left (no yelling Uno), and then you win if you run out of cards first. It’s novel enough, but my biggest problem is that it feels completely unskilled. You really just gotta hope you get a good hand of medium to high cards out the gate and then can play as fast as possible. You have a chance to get a Joker, which is great because it can be played for any hand, but it also never, ever wins. It’s like playing War against three people at once and you know you’ll always lose. 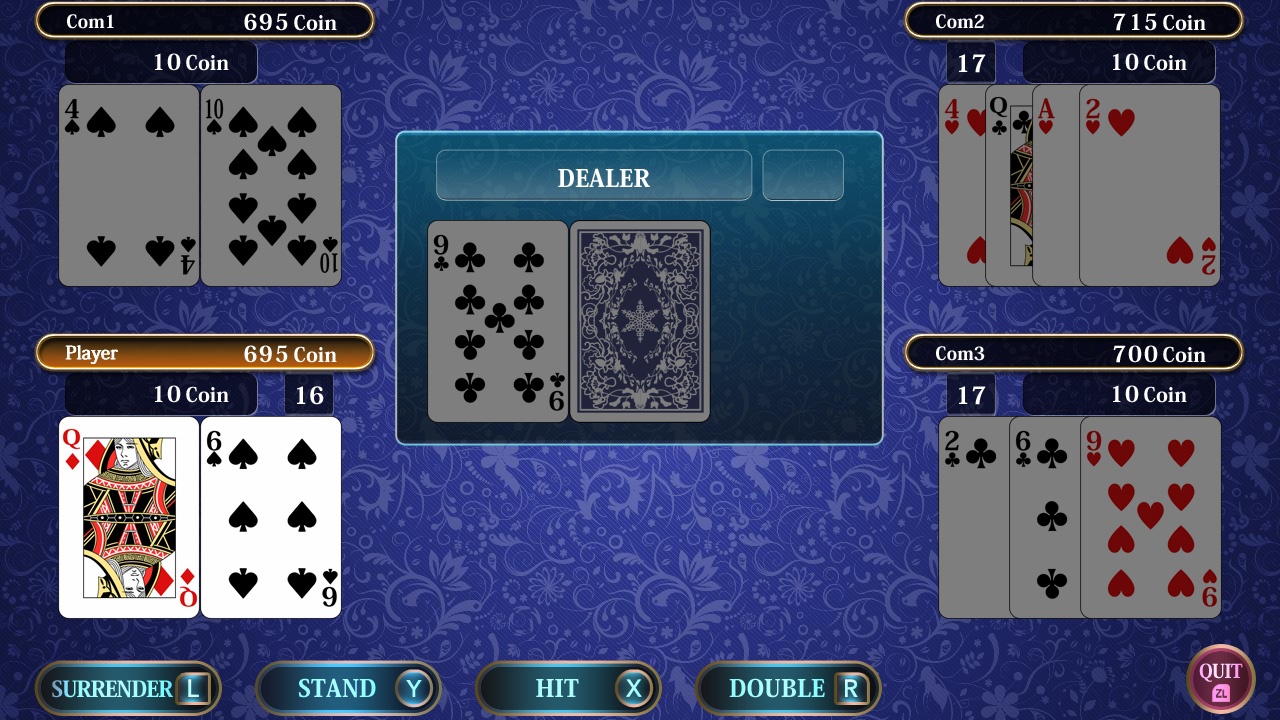 Draw Poker, the last game in the set, is dreadfully fun because there’s no camaraderie. It took a moment for me to play several hands and realize what was missing, and then I realized: it was the lack of talking. There’s no one speaking, no laughter, no taunting or anything like that, and, when you remove any sort of social aspect from Draw Poker, you might as well have a handheld poker game that you get from Las Vegas gift shops. I mean, there’s at least a bit more of a thrill because of the AI players, but it feels incredibly empty from start to finish. I wanted to build my money and rob the other players, but there wasn’t anything fun about doing it here. I stuck to the other games.

And that’s really about it in terms of THE Card. The graphics are, well, cards, there are some weird grammatical choices for the pop up sentences but nothing hilarious or broken, and I assume there was music but I couldn’t tell you if it was elevator Muzak, guitar riffs or polka. It was so forgettable I’m not entirely certainly I didn’t p[lay with the sound off. But here’s the thing: none of that makes this a bad game. This is just a simple game, and people need to understand the difference. I’ve seen people take Chess and elevate it to a beautiful medium, and I’ve seen people do unusual and exciting things with simplistic ideas. THE Card does none of that, only delivering what you’d expect from a quick and cheap game that lets you play card games by yourself on the Switch. There’s nothing different here than what I’d expect on the average mobile card game title except for it’s on the Switch and I guess the resolution is probably better. If you like gambling alone and don’t mind there being no greater purpose, then it’s an alright deal for five bucks. If you want literally anything else, you might as well shuffle off to another title.

THE Card isn’t a fold, but more of a push: it gets the job done for card gamblers with little else involved.