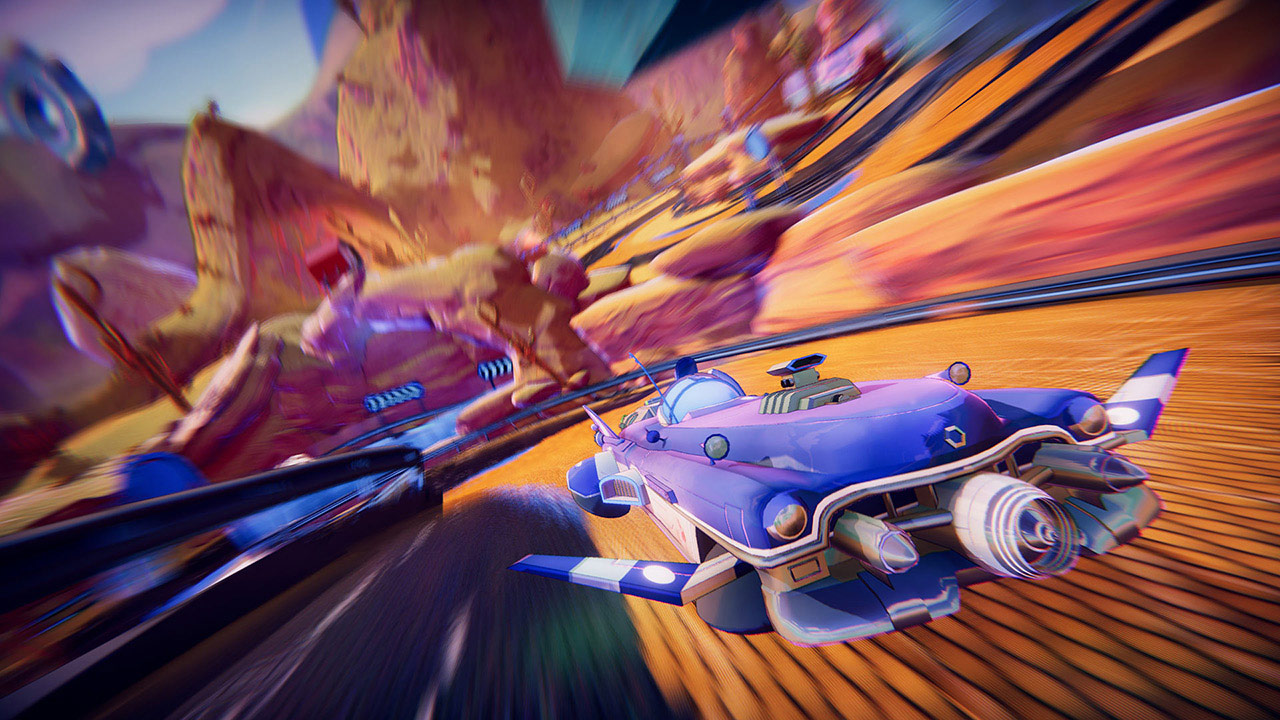 If there’s one element of a racing game that it has to get right, then it has to be the control of your vehicle; without it, the feel of the race is largely redundant. Of course, this largely depends on the style of the game too. If the game is going for a realistic setting, then the cars have to handle appropriately. For a more arcade style though, you can get away with a variety in how the vehicles control. It’s in this element that, especially these days, something new or novel needs to be brought into the mix, such as interesting tracks, weaponry or character and vehicle models. The latest arcade style racer to drive our way, comes in the form of Supergonk’s Trailblazers, incorporating a Splatoon-style mechanic with the thrill of the race as it paints a release onto the Nintendo Switch.

Published through Rising Star Games, the main premise of the game is to boost your way past the opposition by painting streaks across the race track in your team’s colours, thus granting much greater acceleration and top speeds as you work co-operatively to maintain the right shades of tarmac. It’s a sound concept and one that works really well, although in a quite a limited way. However, with only a temporary run of paint spraying, tactical gameplay comes to the fore here, by spraying key locations and making the most of any on-track boosts. This is also vital due to your opponents also spraying their own team colours on the track; an element of the racing that can have the reverse effect of your own paint by slowing you down.

There’s a huge emphasis here on co-operative team play, although some races do require only a solo effort from you. The more areas of the track that are covered in your coloured paint and the longer you stay within their paths, then the faster you will go; outrunning anything else on the track as they battle to take over control and coverage of the raceway. It plays in a cat-and-mouse style, as both teams try to cover each others tracks, as well as work to help their own teams success. Each of the tracks are also littered with a series of portals, which when passed through, immediately propels a path of your colours paint in a strip ahead of you. This is a good way of saving your precious reserves, as well as gaining a stronghold in keeping the track painted in your team’s colours. 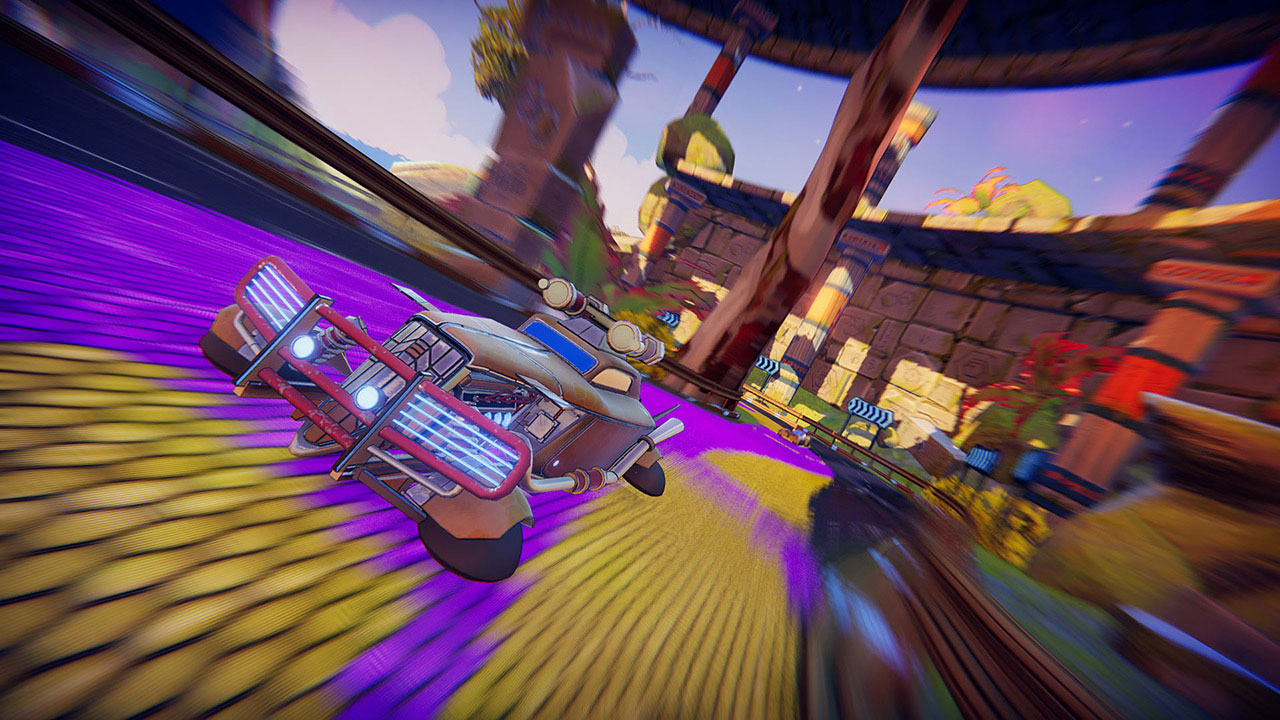 When your reserves are depleted, they fill automatically over time; adding further to the tactical element of the gameplay with how best to implement your strips of paint. However, another factor can also come into play, as a full tank of paint can also be used as an offensive weapon. If an opponent manages to get his nose in front of you, you can then project a line of paint which forces the other car to spin out of control if contact is made. All these elements can combine to produce some tense and exciting racing. However, the game also contains a few mechanics that can significantly add an undercoat to the excitement.

Unfortunately, the cars handle in a very sluggish way; forcing you repeatedly crash into barriers or lose the best racing line. This is further accentuated by painted corners or bottlenecks that simply forces you to ricochet from side to side, or drift to the outer edge of the track and into the barriers. Obviously, this slows you down dramatically and takes away any momentum of boosting along your team’s colours. I rarely felt in full control of my vehicle and, for the most part, found myself battling against the control scheme rather that the other drivers on the track. For a game that encourages speed, it seems a very unfair mechanic that the handling of the cars has been so poorly implemented. 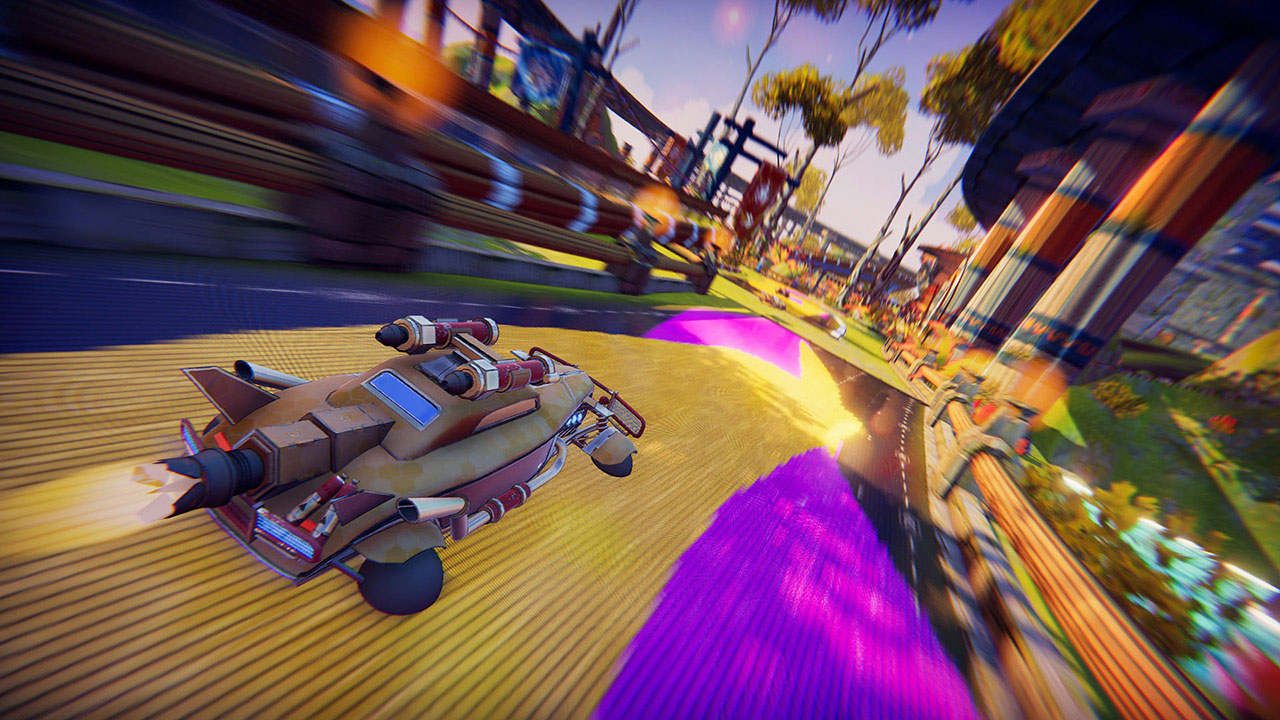 There are a couple of game modes available, with a single-player career, or story mode, as well as a tournament or options that alter the race states. Whatever mode you play though, the main premise of the game remains the same throughout. Presentation-wise, the game also contains a rather basic feel, with the story element of its content being played through a series of textual narratives that’s accompanied by a grunt or a groan here and there. The graphics are quite bright and colourful, but again, do contain quite a basic aesthetic that feels distinctly average, as does some of the audio.

The game’s saving grace comes in its multiplayer though, with both a local and online capacity that comes complete with cross-platform functionality. The tactical element of the gameplay comes more to the fore as you work together to lay the most paint on the track in order to help each other out. However, saying that, there isn’t a great deal of variety within the core gameplay of the game and it soon becomes a mechanic that gets tiresome; even in multiplayer. A quite significant downgrade in graphical fidelity is also noticeable while playing in this mode too.

Overall, Trailblazers turns out to be a game full of positives and negatives. On one hand, the concept of its gameplay can produce some good moments and incorporate a very tactical approach; although it also had to be said that the game can be largely won by painting as much coverage as possible during the first couple of laps, then simply boosting your way around the rest. However, the things it does well are also done just as bad. The controls, or at least the handling mechanics of the vehicles leave a lot to be desired, as do the character and car models. The graphics and sound also leave a lot to be desired. They’re not inherently bad or ugly, it’s just that there’s nothing here that is particularly outstanding, or even stands out; and that’s really the game in a nutshell. It can entertain for a while, but at the end of the day, there’s nothing particularly memorable here and whatever picture it does paint, it’s one that soon dries pretty quickly.

A trail that blazes in places, yet paints a very different picture in others.