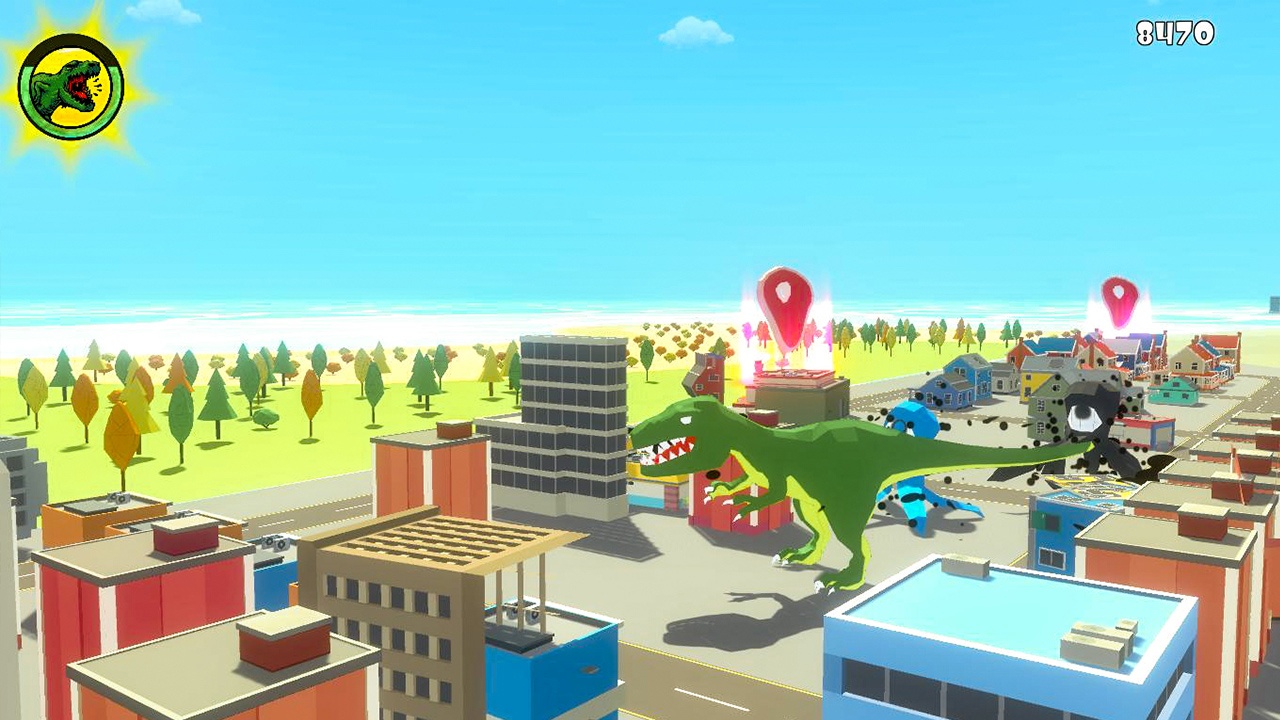 When I picked up Roarr! Jurassic Edition, I didn’t particularly have a certain idea or expectation about the game. I had never heard of the title, the developers, Born Lucky Games, didn’t show up on my radar in any capacity, and dinosaurs haven’t really been a priority for me since I finished elementary school. Still, on the surface, it seemed like it could be interesting: an arcade, kaiju-brawler style game for up to four players at the same time. And one T-Rex is wearing a top hat and a monocle. What harm could there be?

The story of Sue the T-Rex is an odd one, to be sure. Sue is apparently slumbering peacefully for the last 65 million years (already an impressive feat since Tyrannosaurs disappeared 66 million years ago), and is woken up by a loud noise. That loud noise, as it turns out, is an invading alien force, so scary that humanity literally gives up, flees their homes and makes no attempt to stop the invasion. Sue, however, would like to get back to sleep, and understands that destruction is the only way to accomplish this. Oh, and, on occasion, Sue happens to be sleeping a few feet away from up to three other T-Rexes, so they can join in the fight to destroy the aliens and get back to bed.

After a brief tutorial, you and the other players can choose from one of several T-Rex avatars and jump right into the fight. Aliens will spawn in an area, and you need to use a “head” or “body” attack to get rid of them all, alternated between the X and A buttons. You can jump with B, dodge roll with Y (surprisingly useful), and occasionally do a massive roar that deals area damage with R. This charges up over time, so don’t expect to just mash the button nonstop. Hitting with X and A will eventually lead to combos, though I couldn’t tell you exactly what they were because they just seemed to happen organically in the course of button mashing. Enemies will also drop meat at random, which refills a considerable amount of health. Defeat all the enemies to move onto the next area, beat those enemies for the next area, and continue till you reach a massive boss fight. Lather, rinse and repeat till all the aliens are gone and you can get back to sleep. 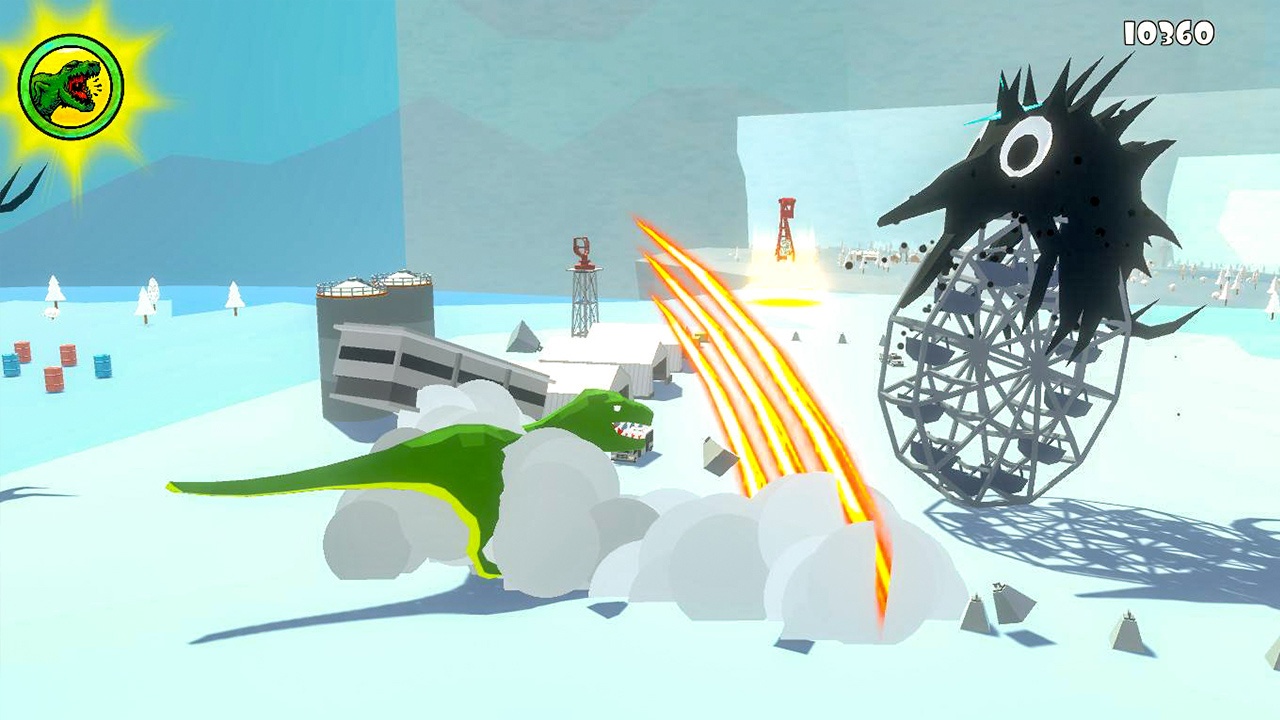 This is one of those titles where I’m scrambling to find something good or fun to say about it, because I don’t think there was anything inherently BAD about it. The game performs well enough, but it’s also janky in execution. Again, you literally just mash buttons like crazy until the aliens are all dead. Save for the bosses and some occasional range damage from certain enemies, you don’t really need to worry about taking damage because the attacks auto target for the most part. If you’re facing the complete opposite direction, no, Sue won’t be able to lock onto the enemies, but if they’re in your theoretically viewing window of 180 degrees you’ll automatically go after them. The combos rack up some silly multiplier names, like CHAOS and BRUTAL, and the points you get multiply with them. Again, though, there wasn’t a ton of strategy to it except for the boss fights, and the boss fights always boiled down to “take out little enemies first, dodge roll behind boss, hit until it focuses on you, repeat”. That I learned from my long journey to the first thresher boss, getting killed, and needing to journey back from the start.

The enemy designs are cool, I’ll give the devs that. Each alien seems to either exist on their own as an inoffensive, mostly benign blob that can be taken care of quickly, or something that seems to have possessed a piece of humanoid technology. The aforementioned thresher boss is literally a harvester from a farm, and the ranged attacks come from aliens having taken over oil drills and hurling flaming barrels of crude at you. That’s pretty interesting, and I would have liked to see even more variety in that, like the giant Ferris wheel enemies or the flying monstrosities. Sadly, once you’ve seen everything in the first level, aside from boss fights, you’ve seen it all. 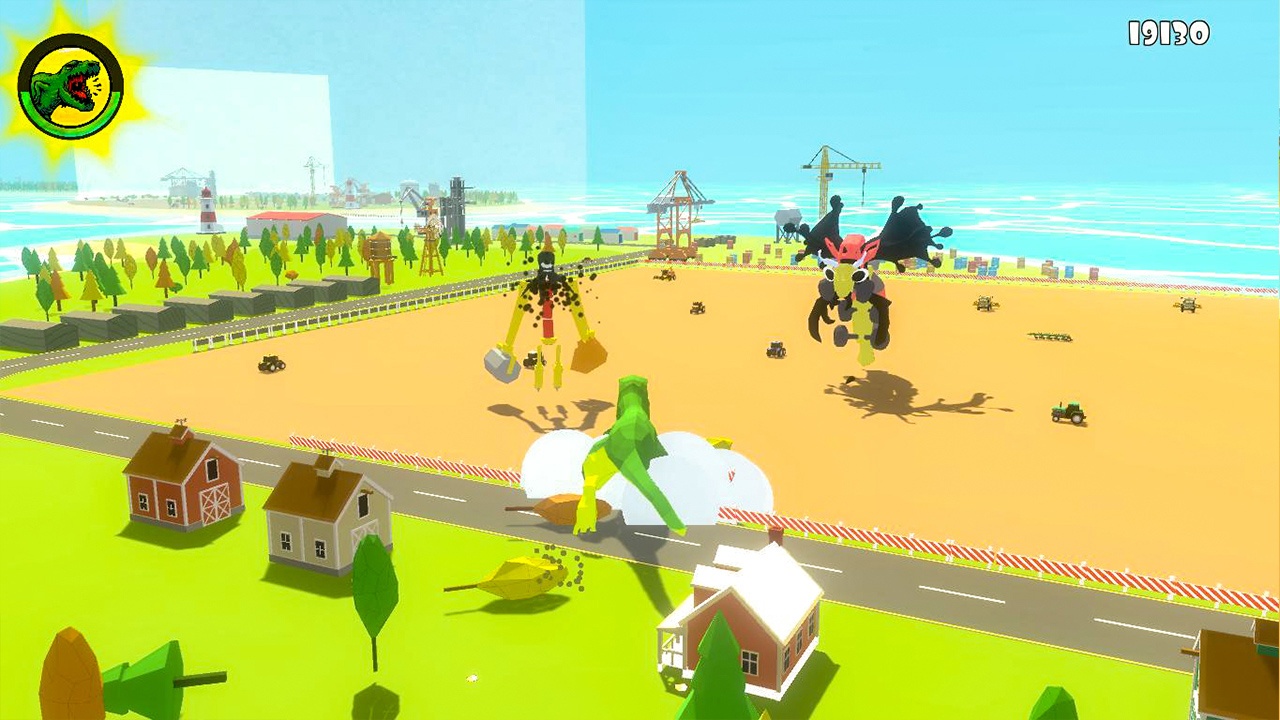 That’s one of the biggest letdowns in Roarr!: repetition. You fight a bunch of small enemies. They’re dead, a red arrow appears and you run after it to the next place. Keep going. Keep fighting. Mashing X and A alternatively without any real plan works great. And you keep seeing potential that never comes to light. The devs tout the destructible landscape, but there’s no purpose to it nor anything particularly cool. I smash houses and kick them out of the way, yet there’s no payoff to it. I can’t push enemies off cliffs, hit them with trees, or even throw them into the giant nuclear power plant that I found. There are opportunities all around, and maybe the devs didn’t think they were important or just couldn’t figure out how to code it, but the destruction is really kind of blah in comparison to even Pizza Titan Ultra. You beat the boss and move onto a new area, like a beach-side resort or a busy city, but then you see it’s a fresh coat of paint over the same setup and execution.

Two pet peeves that really have nothing to do with anything: the tutorial and the load. No matter how many freaking times you play Roarr!, you still need to skip through the goddamn tutorial every time you start a new game. No, it doesn’t take long: mashing the A button will get you in the clear in a matter of seconds. But I have to do it, despite being a master dino smasher at this point. And the loading screens are bizarrely long and odd, leaving me with many times where I was sitting and watching the blinking T-Rex logo, waiting patiently for things to hurry up and be ready whilst the simple, repetitive background music played over and over. That could have just been a bug or a load error, because it didn’t always happen, but it happened enough that I thought to mention it.

There’s no reason to attack the graphics because Born Lucky Games are quite proud of the angular, polygon designed form that calls back to “retro” times, so that leaves us with what we have. A game that, at best, is just okay. There’s nothing to unlock, no grand secrets or excellent soundtrack, and the brawling aspect is easily replicated and enjoyed on another medium across multiple platforms. I think it’s incredibly telling that two of the three quotes they have for game reviews on their Steam page are literally from periodicals stating that they reviewed it and not what they actually thought of it. Roarr! does nothing to maintain replay value, comes across incredibly bland, and might only be of interest to people playing it ironically or hardcore dinosaur enthusiasts. Cannot recommend.

Roarr! does nothing to maintain replay value, comes across incredibly bland, and might only be of interest to people playing it ironically or hardcore dinosaur enthusiasts. Cannot recommend.