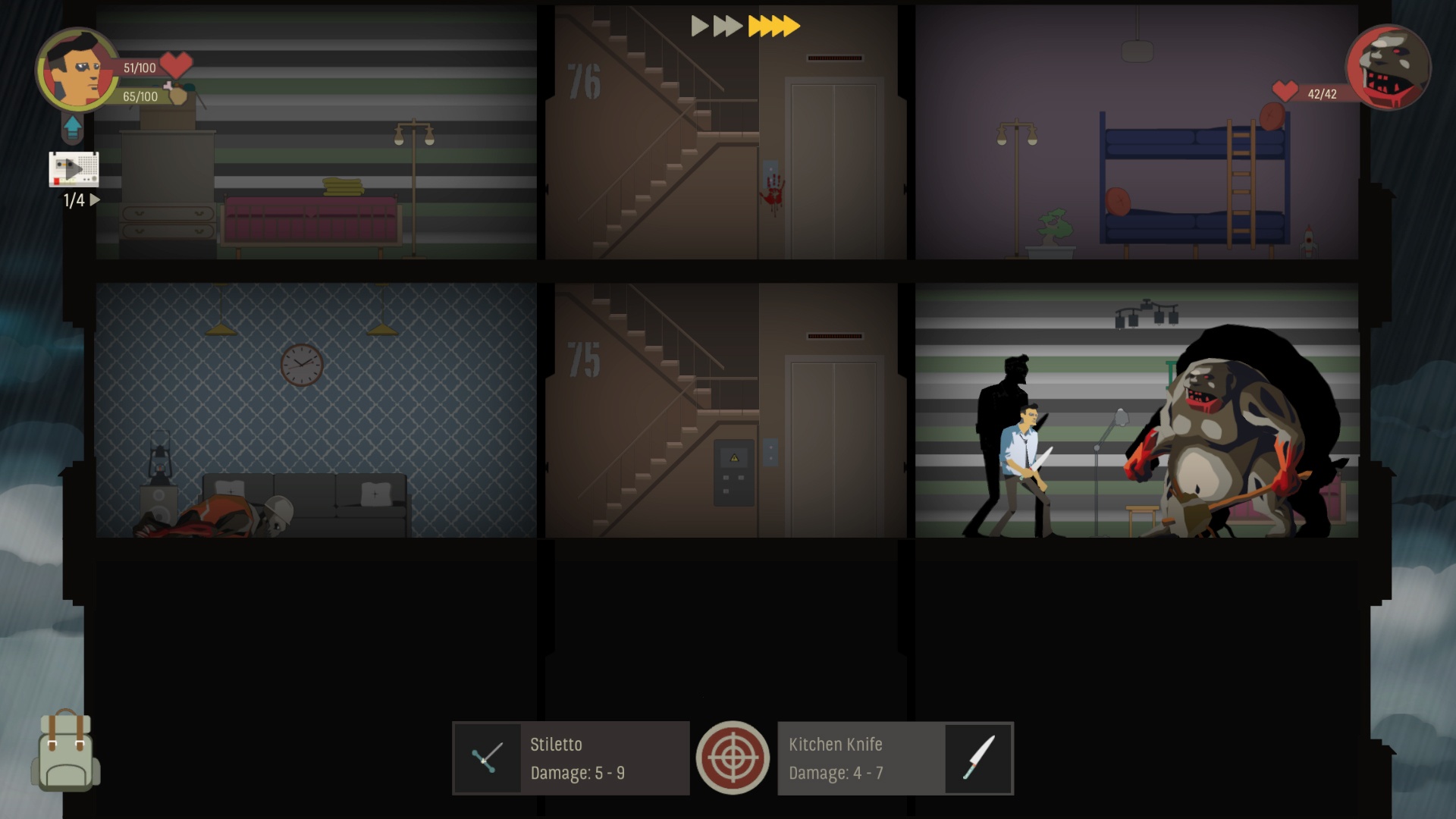 You are, presumably, the last man on earth after a nuclear explosion turns the population into a collection of grotesque mutants. It is your task to find your way to the bottom floor and see what has become of the world outside. The lack of answers is what drives you forward because there’s not really any more story from this point on.

There are little snippits of other stories, told via audio recordings and newspaper clippings, but they don’t really have a bearing on the whole nuclear apocalypse thing.

Skyhill is played exclusively by clicking. In typical point and click fashion, you select via a cursor to interact with the world around you. Movement, combat, and accessing various menus for crafting and character stats are all done through clicking. You begin the game on the 99th floor of the hotel and from there you are to make your way down via the stairwells. Once you find a VIP access card (and you always do somewhere in the first few floors), you are able to use the elevators for fast travel. Moving anywhere requires food and, once your food hits zero, you start losing health. Once your health is zero it’s game over, so you have to be careful to maintain both stats. 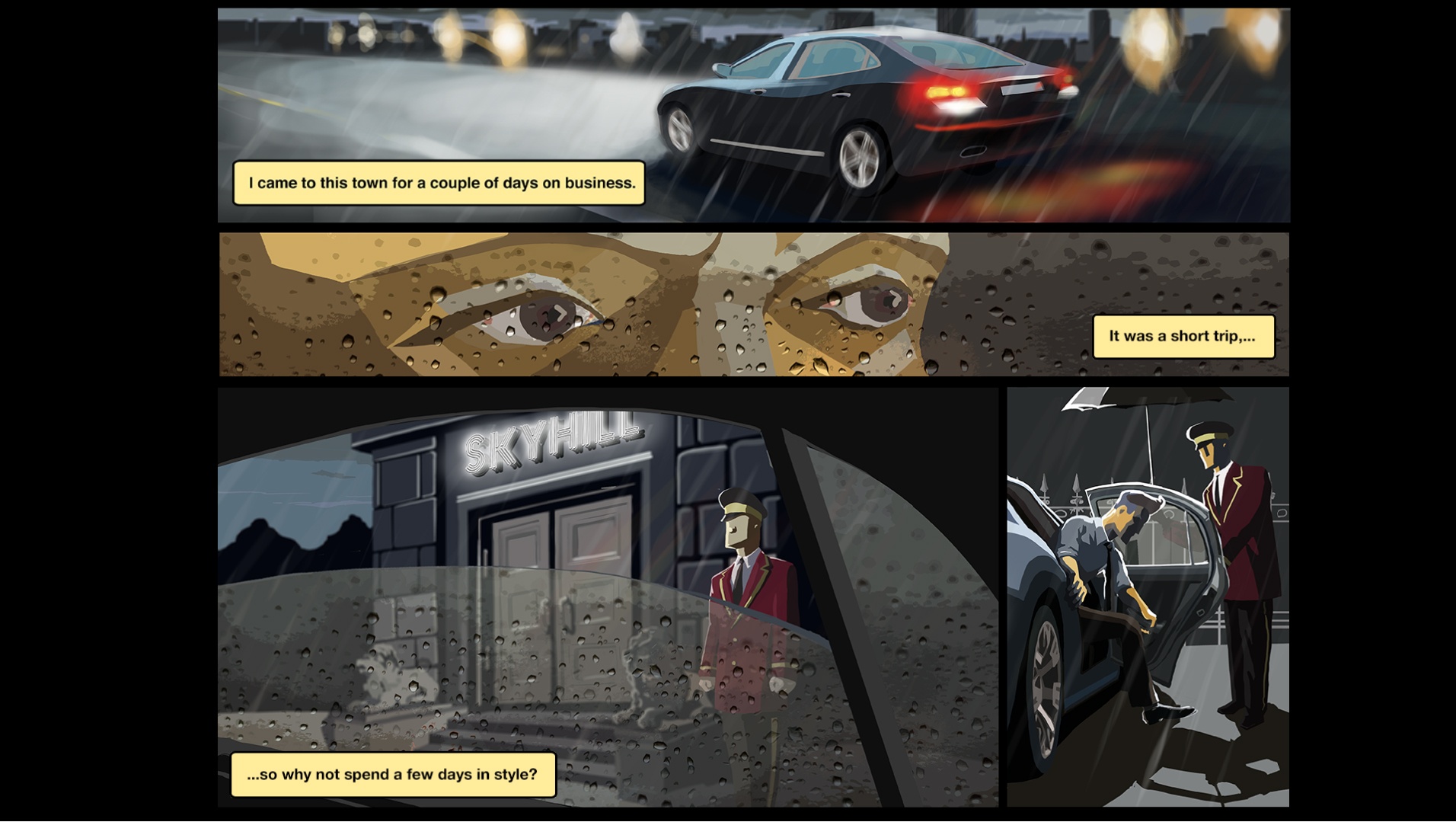 Health and food are regained by using consumables that can be found or crafted. There’s also a bed in your room, where you can sleep at the cost of food in order to regain health. It’s important to note that negative events can randomly happen while you sleep, though the chance of that can be decreased by upgrading your living space.

You collect items by clicking through furniture in the various rooms you’ll encounter. You can’t search everything—just what can be interacted with. Some rooms have a handful of lootable furniture while others have none, so there’s a risk associated with checking out every room because you’ll spend your food without gaining anything in return. There are two rooms per floor divided by a stairwell/elevator. After you’ve gathered enough materials, you can start making things. There is a simple crafting menu that you can access at any time, though you’re limited to crafting the majority of things in your suite. Craftable items include weapons, materials, medical kits, food, and upgrades for your home base. Upgrades give you a bigger selection of craftables and also make it safe for you to sleep at night.

Combat is also done by clicking. You randomly encounter enemies and, once locked in combat, your cursor changes to an aiming reticle. At the bottom of the screen, you can tab between one of two weapons. You can also turn on advanced mode, which allows you to target the enemy’s body parts for more damage at the cost of accuracy. After combat, you’re rewarded with experience points. Once you earn enough, you level up and are able to assign points to four stats: speed, dexterity, strength, and accuracy. Each gives a different bonus in combat: speed grants you a chance to get an extra turn, dexterity gives you a better chance at dodging, strength allows you to do more damage, and accuracy gives you a better chance of striking an enemy. Stats are also necessary in determining what kind of weapon your character can wield as some require a certain level of skill or combination of skills.

There are some collectables in the form of documents and tapes that you find randomly during your playthrough. These tend to be creepy and unsettling and I found that they caused more questions than they answered.

Skyhill is properly desolate. Many of the floors are dim until you fix the electrical boxes that power them and restore power. There’s blood on the walls, crushed elevator doors, askew furniture that suggests a struggle or a quick escape, cellphones with creepy, vague texts lying that buzz loudly enough to wake the dead when you walk into a room, and newspaper clippings/notes that give you a snapshot of the world around you. They all work together to create a sense of ominous uncertainty that linger as you explore rooms. In the background the sky is stormy, it’s gloom punctuated by cracks of thunder. 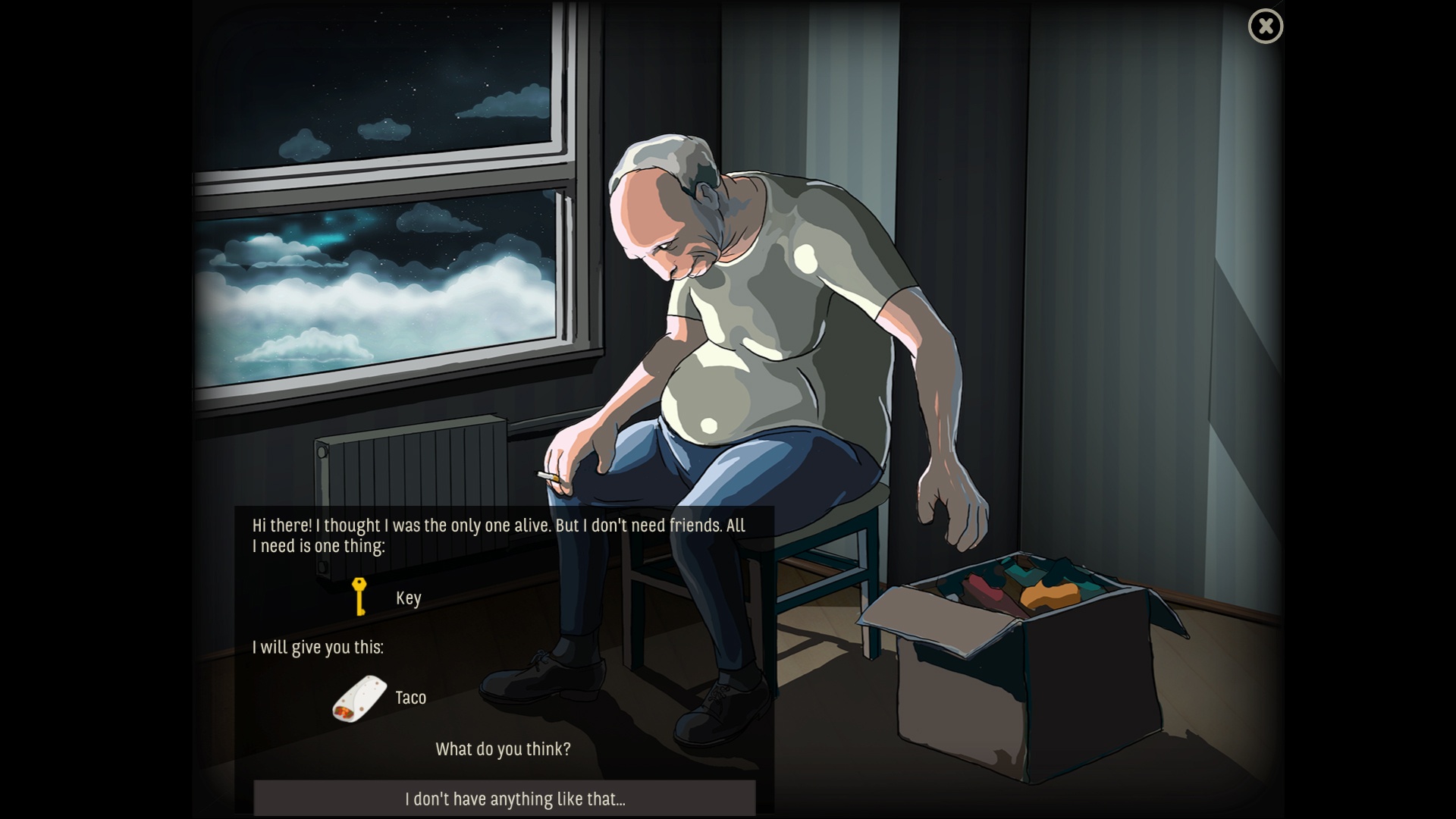 On that note: the BGM doesn’t change much as you explore, except when you’re in combat, and but it’s suitable for the task of lonesome exploration.

Because this is a rogue-like, there’s plenty of replayability here. The hotel is randomly generated, meaning no two runs are the same, and there’s fun in trying to get further each time you play. There are also four different difficulties, one of which is a hardcore mode that you have to unlock, which will only add to your play time. The perks you choose and the items you find make it so that you have to adapt your play style accordingly.

You are also able to stop mid-run and resume where you left off later, which encourages you to play for different lengths of time. This breaks up the repetitive gameplay, so it’s a very good thing.

Skyhill is a lot of interesting ideas wrapped up in a flawed delivery. Though it isn’t the most riveting of games it has great atmosphere, some RPG elements, and a variety of difficulties.  As long as you aren’t turned off by repetitive gameplay, there’s plenty of fun to be had here.

Skyhill is an interesting mix of genres set in a post-apocalyptic world full of mutants. Explore, loot, craft, and fight to survive–point-and-click style.