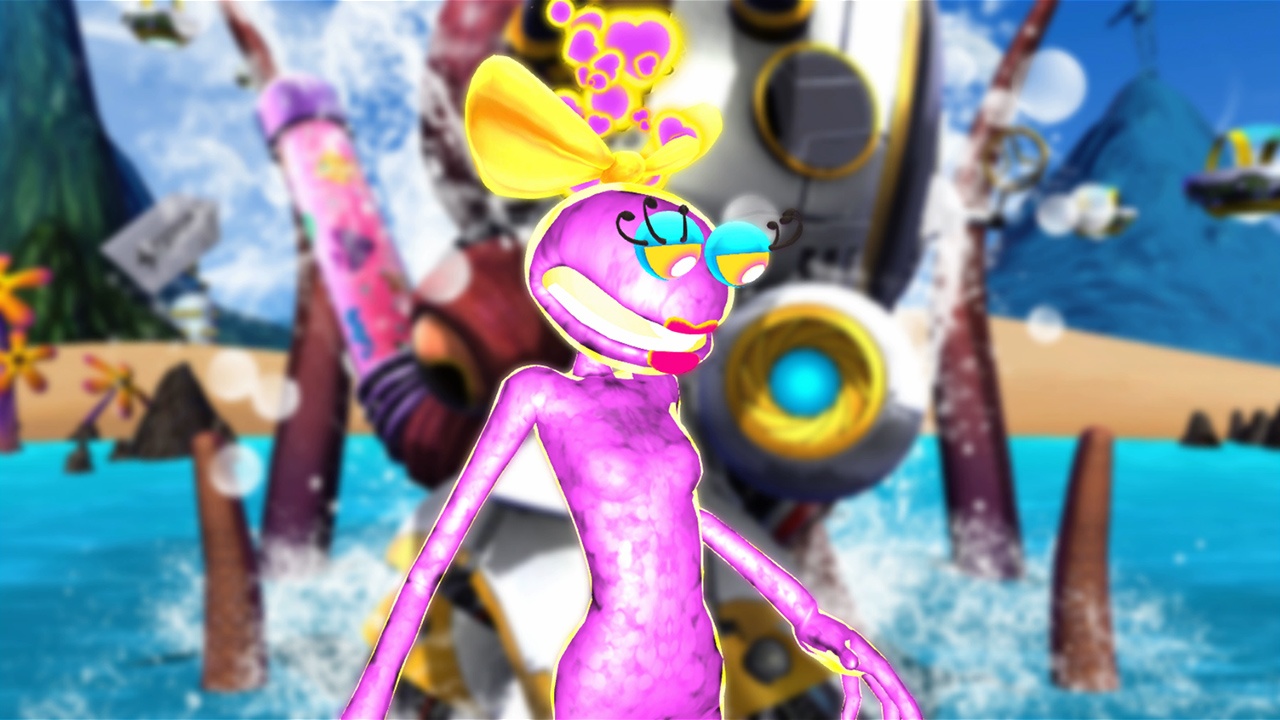 There’s simply no denying that people, as a species, love explosions. Explosions are a microcosm of what it must have been like when primitive humans first discovered fire, but without that part of when they tried to touch it for the first time. From Michael Bay to Mythbusters, there’s entire empires built around the sole idea of exploding something to make it more exciting or fun. For developer Twisted Pixel Games, they fully embraced this idea, and thus the excitement and enjoyment of Ms. Splosion Man fully comes to life.

Ms. Splosion Man takes place directly after Splosion Man, a game that many will not have played due to it being an Xbox Live exclusive. Splosion Man is a science experiment that can basically explode himself repeatedly in order to get to certain locations. Well, in his bid for freedom, he fails, and is promptly captured by scientists from the laboratory, Big Science. Not to be outdone, his capture seems to inspire celebration in the scientists, who promptly spill chemicals and create, get this, Ms. Splosion Man. Also not wanting to be contained in a lab, she immediately makes a break for freedom, and thus our adventure begins. Like her male counterpart, Ms. Splosion Man has the ability to explode multiple times in a row, and, unlike the other dude, she is damn sassy.

Ms. Splosion Man is equal parts precision platformer, speed runner and hilarious experience. You don’t jump: you explode. You can explode a few times in a row, with every subsequent explosion being smaller and less effective than the previous. As you go, there are, naturally, traps and guards intent on not letting you get far. But fear not: Ms. Splosion Man has got the goods to go far and make it in this crazy world. There are extra explosives that pop up on occasion (not sure why people thought those were a good idea to keep around) that you can chain off of to reach great heights. You can do some awesome wall jumps to move around effectively. Cannons will fire you in different directions, triggered platforms will slide, appear and disappear in sequence, and so much more. Ms. Splosion Man is designed and catered towards making your life an exciting mess. 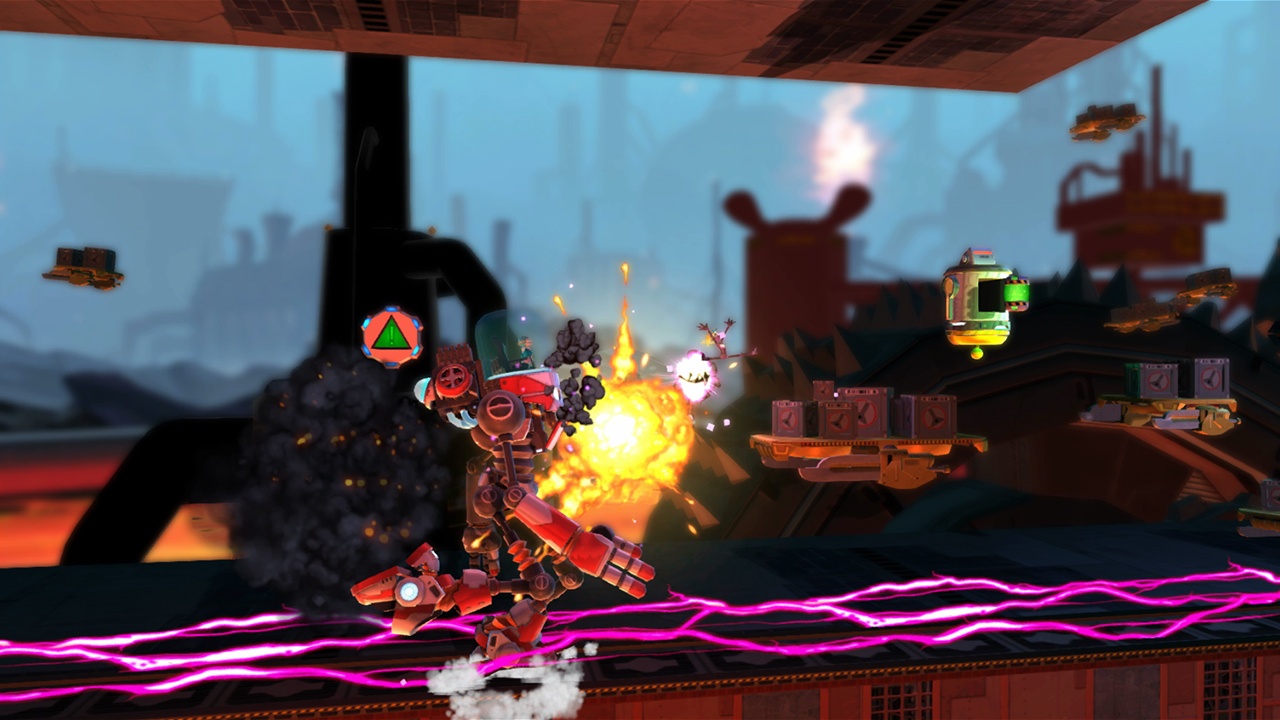 Out the gate, I want to start by saying that Ms. Splosion Man is one of those titles that is crazy fun when everything works and incredibly frustrating when it doesn’t. The difficulty curve can be tenacious, but it exists for a reason, and it make getting things right all the more satisfying. The first few levels really give you a chance to see what cohesion looks like, and how fluidly you can explode through the different levels, earning achievements, getting coins at the end for different unlocks, and generally soaring through the worlds like an unbound entity of chaos. It’s just so damn fun, and the kinks of needing to solve and figure out different timings and patterns only slightly slows down the overall effect of the gameplay.

When things get hard, however, they get SO hard. There are extra levels per world that are marked in red, and rightfully so, to warn players that this is not a fun, easy place to be. One of the first ones you encounter is a rail-riding level of moving between currents before laser beams cut your pretty head off. Remember all those awesome solo missions in Splatoon 2 where everything was about timing and jumping between ink streams before death? Imagine that, but in 2D and the window for missing was far, far less forgiving. They’re not mandatory, just like not finding the pairs of shoes each level isn’t mandatory, but let’s be honest: you want to do it. You want to conquer these difficult worlds no matter how many times it takes. YOU ALSO NEED THOSE SHOES BECAUSE THOSE KICKS ARE AMAZING.

The personality of Ms. Splosion Man is probably my favorite part of the whole package. You run around between these worlds, exploding and eviscerating everyone you come across, and, the whole time, Ms. Splosion Man can’t stop espousing quotes, lyrics and other witticisms everywhere she goes. I heard Ace of Base, I heard Notting Hill, Spice Girls came up a few times…what’s absolutely crazy is I’m pretty sure I heard her yell “Cash me outside” once, which is a fairly modern reference and quote to interject. That means the developers decided, before porting this game to the Switch, that the memes from Ms. Splosion Man had to be slightly up to date, and that is unbelievably fabulous. It takes away NOTHING from the gameplay itself, so you can mute the volume if you don’t enjoy hilarity. If you do, there’s a chance it’ll get old, but that hasn’t happened to me yet. 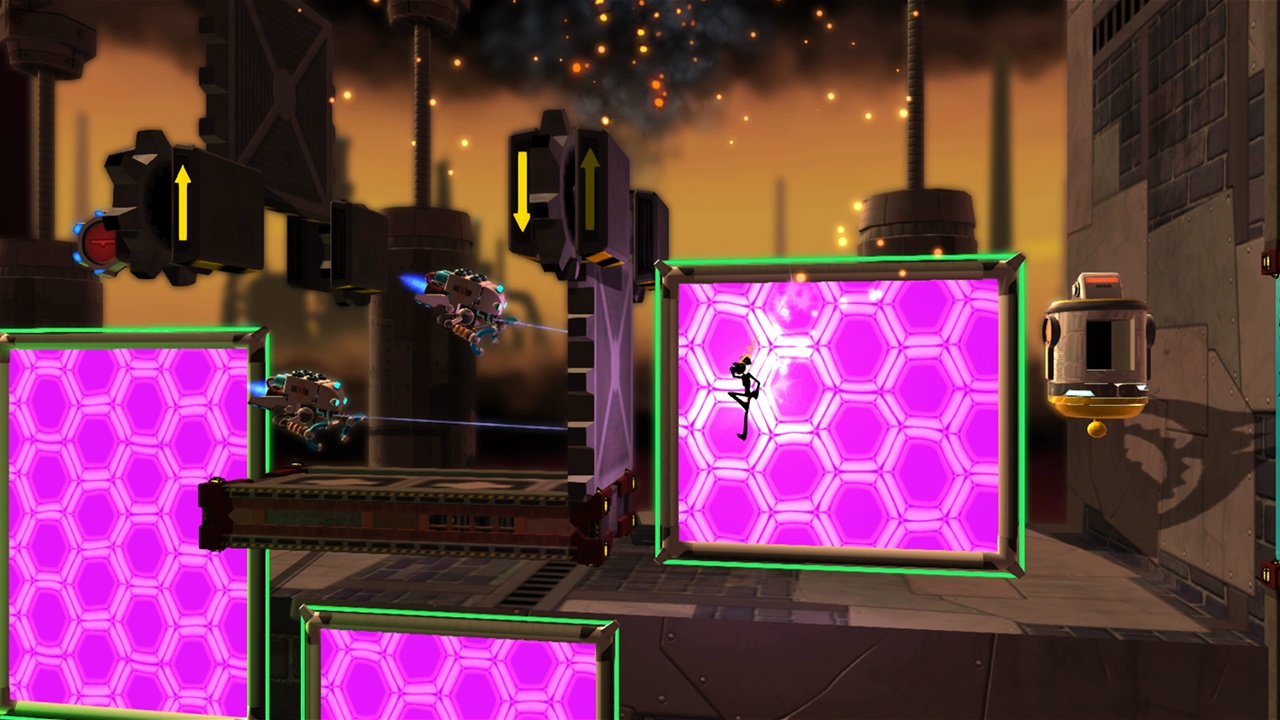 The boss battles are also something to behold. Due to the very nature of Ms. Splosion Man, you need to slow things down and work with a different format of timing and precision than the normal levels. However, there’s a good transference of frame, from the very first boss that has you explode out his eye to a bouncing, thread-the-needle bomb toss with a robotic octopus, things keep staying fresh and exciting throughout, and the boss battles feel organic instead of mandatory. The only one that feels slightly out-of-place is the fight with The Bride, and that’s forgivable because it’s such a departure from the normal gameplay that Nintendo fans will adore it without question. Without spoiling too much, get your Little Mac Amiibo ready.

The only letdown for me, so far, is the multiplayer, and that’s just because I wasn’t able to connect to anyone in order to test it out. The multiplayer levels of Ms. Splosion Man are just as many as the single player mode, and there’s fifty stages of co-op explosions that ask you to trust your friend to explode you to the goal. It’s a great test of teamwork, and it seems to be incredibly responsive, but I just wasn’t able to find someone online to test out how it works across the Internet. Hopefully, with a more widespread release and better attention to the game, players will be able to find other Splosions to work together and have a hilarious time together.

Ms. Splosion Man is an indie legend, and I’m incredibly glad to see it come to the Nintendo Switch. It runs fantastically, never dipped in frame rate or response,  and the pace and nonstop chatter never got on my nerves or left me feeling frazzled. It has incredibly hard moments, to be sure – a stage in world three where I had to essentially juggle a bomb two rooms length stands out in my mind – but the difficulty scales and makes sense. If you’ve never tried it before, now is the time to really blow this game out of the water.

Girls just wanna have fun, and fun sometimes means detonating everything around you across fifty madcap levels of mayhem, detonations, and 80s quotes.