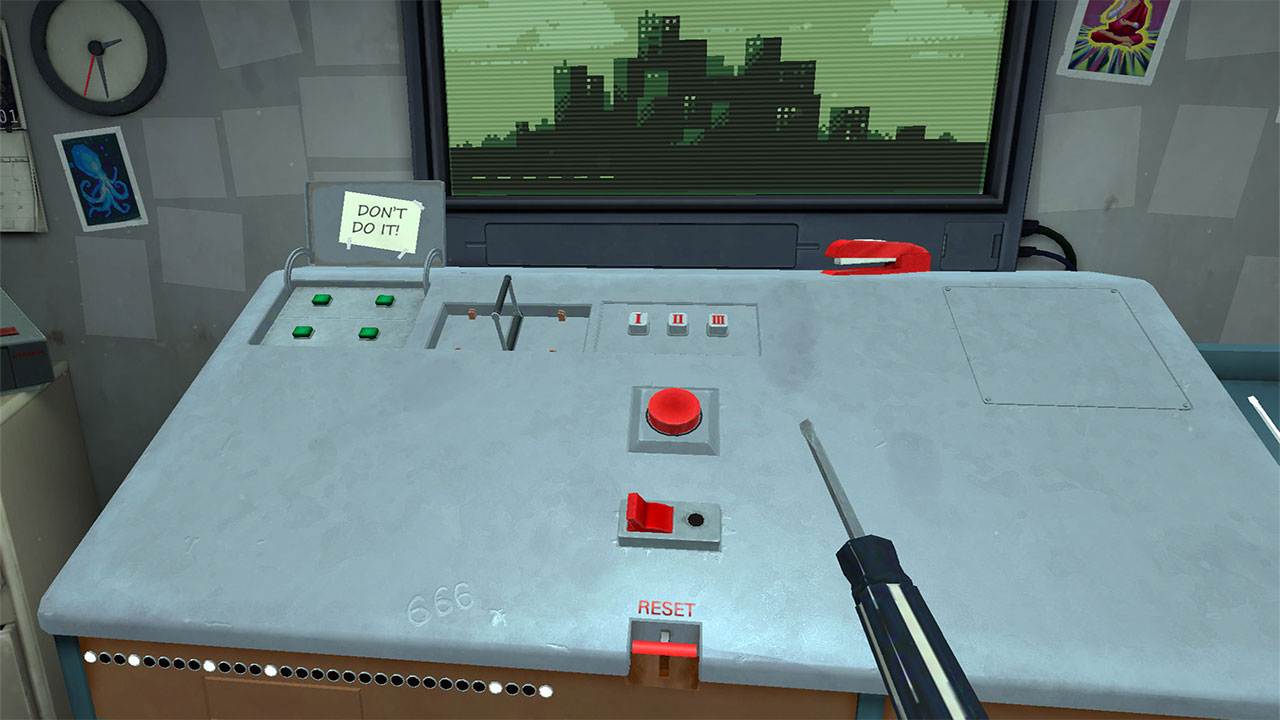 A good puzzle game can enthral someone for hours, while a great puzzle game creates a reason to actually invest your time and effort into problem solving. Take, for example, something like Puzzle Puppers, a game that I keep coming back too time and again but I can’t actually explain why, other than “dogs are cute.” The Missing, on the other hand, compelled me in massive ways due to a wonderful storytelling element, character development and some truly ghoulish but creative game mechanics. It’s all about the execution: helping a game bridge the game from “addicting” to “enthralling.” For game developers Four Quarters, it was all about taking a good idea and using the trending technology to push it to bold new heights. Now, Nintendo Switch players can experience the exquisite agony of Please, Don’t Touch Anything.

The premise of the game is incredibly simple: you’re a fellow coworker/acquaintance of someone at an unknown company/organization, and they need to step out for a moment. You’re left alone with a giant panel that seems devoid of everything except a single, glistening red button. The words of your colleague echo in your ears: “Please, Don’t Touch Anything.” You could listen. You really could, and that would be good. But…aren’t you the least bit curious what happens if you do push it?

Please Don’t Touch Anything is one of those wonderful pieces of art that takes a simple concept and blows it up into something absolutely mind bending with how far it goes and what it could mean. The game was, originally, a 2D, pixel art inspired deal that had a ton of intrigue but not necessarily a lot of appeal outside of a smaller indie market. When Four Quarters made the leap to transition the game into a VR ready, 3D affair, the game took on a whole new life, and it’s this version that we see here on the Nintendo Switch. Instead of using guesswork and dumb luck to happen upon what to do next, you instead are able to explore the room, picking up on nuances and details to figure out different ways to manipulate the machine. If you take the straightforward path and simply do things as they unfold before you, the game is over before you know what’s happened, and that’s to be expected. It’s when you start to experiment with different interactions that things really pick up and take off. 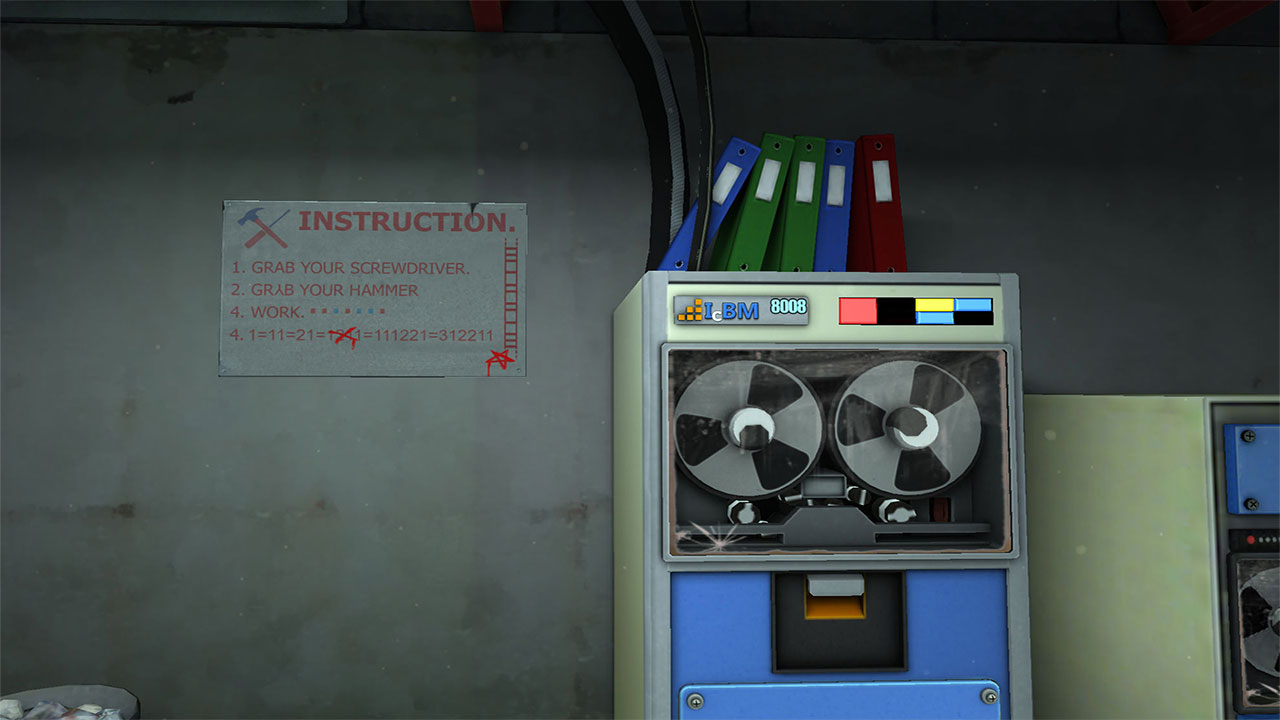 For players who are into reason and logic puzzles, Please Don’t Touch Anything is a fantastic test of patience, reasoning and outside-the-box thinking. Around the room are notes, figures, doodles and objects that may or may not have anything to do with anything. The 3D aspect of the game elevates the problem solving to a far greater extent than what you can find and do in a set amount of time. Since you can’t really move from your spot, it’s up to the player, through trial and error, to figure what can can cannot be manipulated. There are some things that seem obvious, like desk drawers, that don’t interact whatsoever, and then there are obvious things that you wouldn’t initially consider, like if a button can be pressed more than once. The way that things pan out, the “endings” that can be found are divided into three categories: find them quickly (can be done with almost no thinking whatsoever), take some time (use visual clues and deduction to get to the ending) and goddamn impossible (how the hell did this turn into a Dune reference??).  The latter few endings might require some online assistance to point in the right direction, but they can be done without the Internet intervening.

The first person VR interactions with the game actually translate very well to the Nintendo Switch, I have to commend the porting. Being able to move through space, zoom in with a single button and swivel around easily with the joysticks make this non-VR play a good experience. You really get a feel for the room and start to map things out in your mind, trying to commit certain details to memory so that, when you’re ultimately forced to retrace certain steps and see if different variables make new outcomes, you aren’t constantly trying to remember which way the sequence went to get back to the strange extra panels. Certain existing “endings” are significantly more satisfying in 3D, including a certain Illuminati referencing ending that went from “huh, that’s odd” to “WHAT THE HELL” by being in 3D. Additionally, the 3D element adds extra missions that simply would not have been possible in the 2D presentation. I’d like to say what they are, but I’m not in the habit of spoiling gameplay for people, especially not when some of them seem incredibly easy to figure out with zero spoilers. Plus, it’s worth it to invest the time so that you can enjoy the full scope of the awesome soundtrack, which has not changed from the original version and I’m grateful for that. It’s a beautiful electronic ambience that shifts and changes depending on what bizarre ending you encounter. 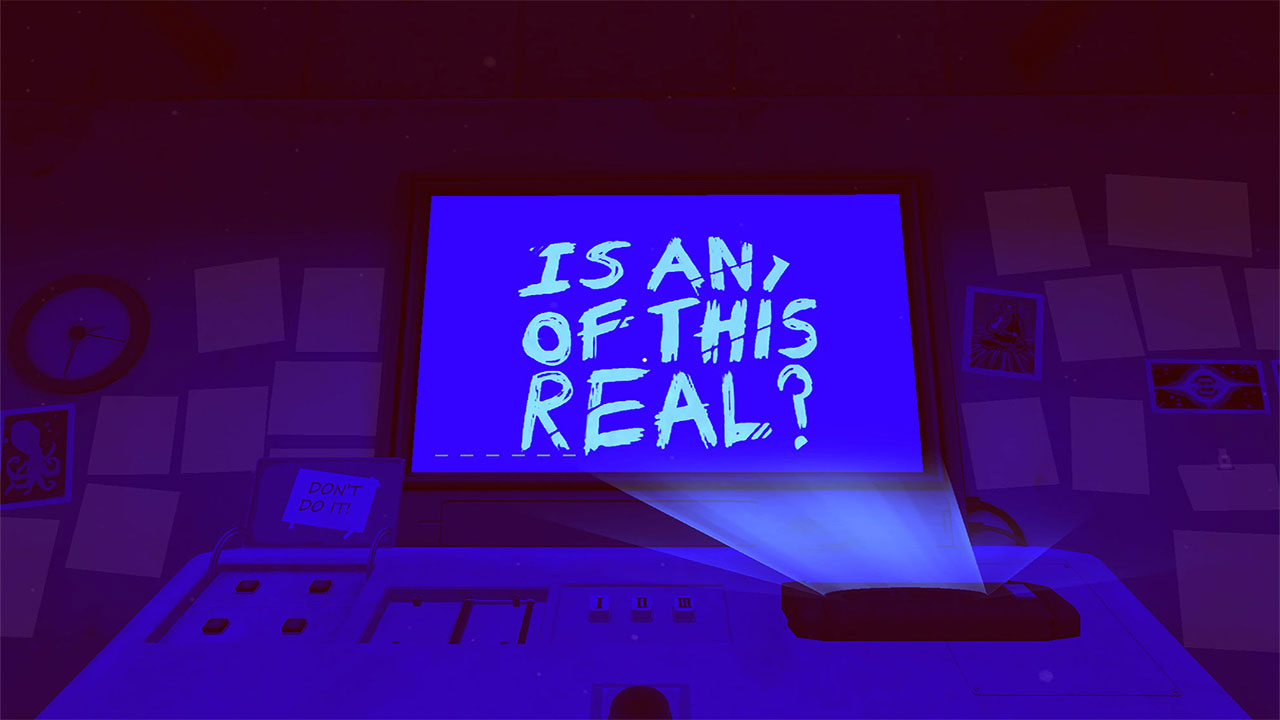 The only two caveats that I’d levy against Please Don’t Touch Anything come in form and execution, and that’s entirely subjective. First, the VR styling means a lot of perspective camera shifts that can, in cases of people like me, lead to mild nausea when you need to move quickly between different points, particularly when you’re sweeping over things with a blacklight and the atmosphere is already a bit odd. This is further compounded by the interaction with the target sensor as opposed to a mouse, simply because it’s harder to finesse small details without mouse movements. I sincerely hope Nintendo figures out how to have mouse drivers implemented at some point: the USB keyboards work wonderfully and a computer’s mouse simply makes for better pointers for certain games.

The second point to keep in mind is that this is a puzzle game with admittedly finite endings to discover and execute. Once you’ve successfully found all thirty of the endings within the game, that’s it: there’s no mysterious online mode or deathmatch or whatever that other games might be able to offer. Ergo, the enjoyment of it all comes from conquering the challenges and, in some cases, testing yourself to do them all from memory and in a certain amount of time. It’s equivocal to people who love to speed through Rubik’s cubes, in that I can sort of get the appeal but it doesn’t quite line up with my habits. There’s even an option in Please Don’t Touch Anything to erase the save game, and it’s clear and present in the menu. They know their fanbase loves to nuke all the achievements and try to get them again. The question stands as to whether YOU, the consumer, would want to join that sort of mentality.

Having said those two minor things, there really is something incredibly appealing about Please, Don’t Touch Anything. It’s equal parts absurdist apocalypse simulator, meta gaming analysis, inside joke generator and hair pulling logistics nightmare. Everything about this game screams that you should NOT have been left alone with the console, and yet here we are. The music is slowly washing over you like crisp, pixelated waves, the display unwaveringly shows the city above, and there, in front of you, stands that jolly red candy-like button. It’s human nature. You’ll want to push it. You will push it. And you’ll be pretty astonished as to what happens next.

Full confession: I touched something. Like, a lot of somethings.