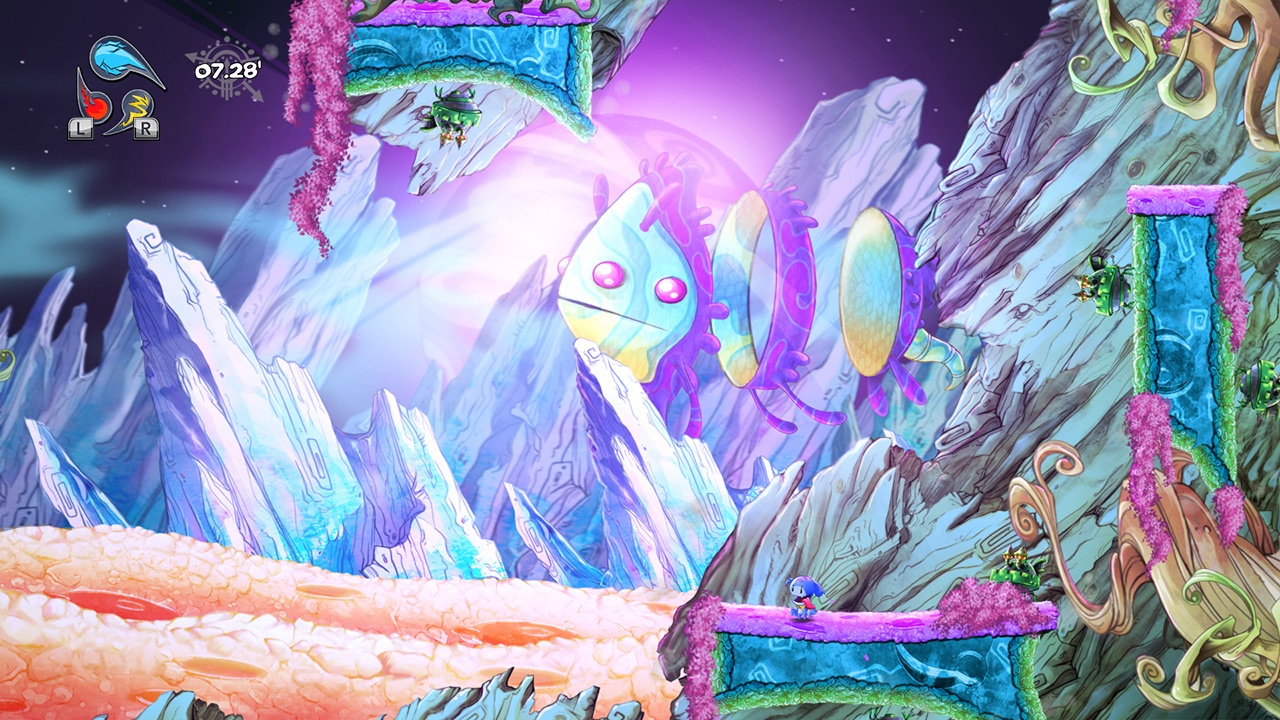 There is a demand out there for difficult platformers, I can’t deny that. It’s hard to say that Super Meat Boy was the first, but I argue it’s the one that helped popularize the concept and the execution. As time went on, more and more variations on the topic came to light (the mechanics in Celeste are some of the best to help balance the difficulty) but we always circle back to the core idea of a game that’s brutally hard and seemingly impossible without some significant trial and error. So, what if we added the rub to make it cute? With sweet graphics and an adorable mascot, OkunoKA seeks to win over “casual” players to the hardcore game, but, as we soon find out, style beats looks every time, and not even the most plush avatar can save you.

The World of Souls appears to be a chill place that, sadly, gets infected by an evil entity, named Os, who is seeking to imprison all the good little souls floating about and use them to power his machines. World domination plans, probably. Anyways, amongst all the golden, marshmallow souls is this one large, blue, slightly silly creature named Ka. What is Ka’s purpose? What is Ka supposed to be, exactly? Does any of it really matter when it comes to gaming exposition? Ka seems to really enjoy eating the black, evil souls that have cropped up where his yellow friends used to be, which is helpful in combating dark forces. Now Ka will run, jump and chomp his way through multiple worlds and levels to help fill his belly and make the World of Souls a good place again. And Ka seems to be unable to die, so that’s gonna help, because OkunoKA wants you to die. A lot.

The purpose for each stage in OkunoKA is to get from one end of the level to the delicious dark soul that’s hiding somewhere further along. After the first stage, things immediately get convoluted as to make sure you know this isn’t a straightforward adventure. There’s wall jumping to do, large gaps to conquer and plenty of brambles and other spiked things just hanging around to make your life significantly more difficult. Ka, to his credit, has a pretty tight control on things and does a good job of being able to adhere to what you want him to do. There’ll be times when you need to ease off the gas and simply walk, because the running creates too much velocity and you’ll die. There are fine gaps that you sometimes need to weave through in order to get the best time and (honestly) the only way to finish the level, and it’s a precise matter of “push the button exactly here, hold it this long, release and pray to God.” You’re graded on each level from D to S based on your time, and, spoiler, I got a B on the first stage the first like five times that I played. This both sets the tone for the rest of the game and gives players an early glimpse into the hell that’s awaiting them. 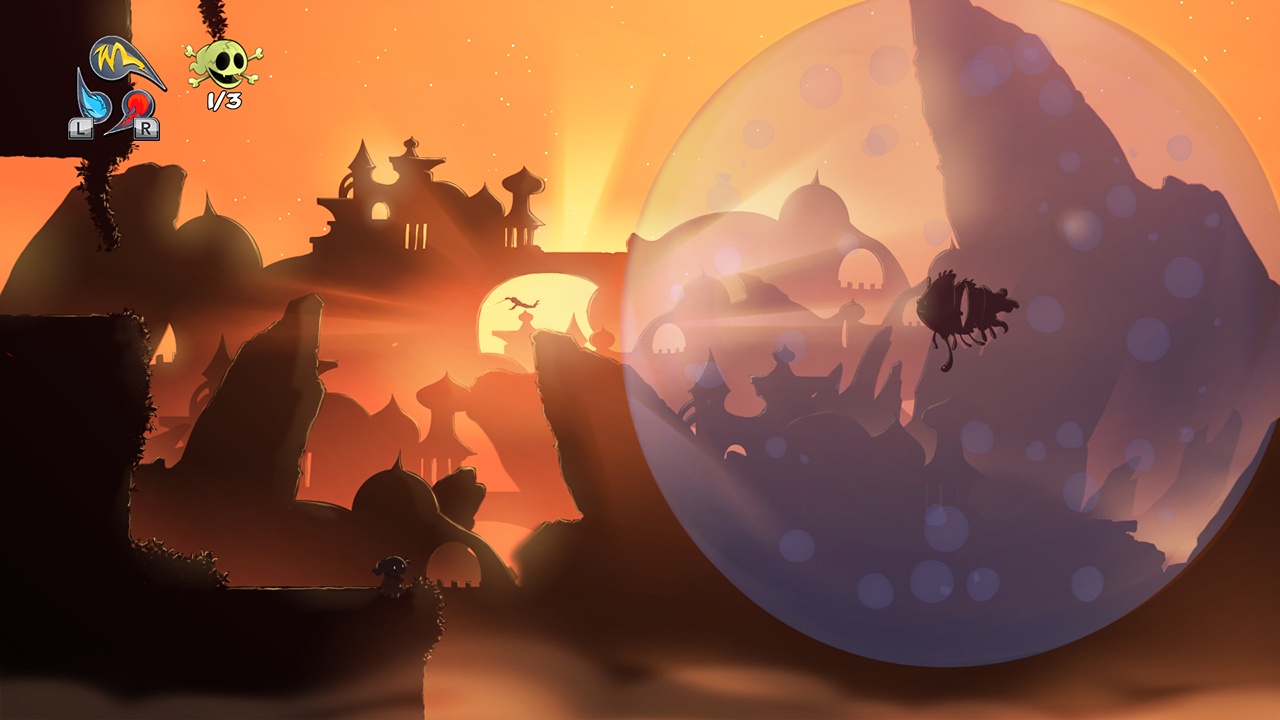 OkunoKA is hard. Like, crazy hard. There was a stage in the first world that I literally played about thirty times before I got it right, and I was in no way satisfied when I finally finished it. I knew it would be hard: the game advertises itself under the portmanteau genre of “masocore” to help give people the right idea, but they also use the world casual in some description points, which I find to be dreadfully unfair. I think the casual aspect comes from the graphics, which is such a weird point of view to take. To be fair, the graphics are phenomenal: I think Ka is super cute, the levels are colorful and well designed, and the little animation of slurping down the dark ball at the end is always endearing. Sometimes you get surrounded by ice at the end because you suck and your grade is low, but, again, I never felt compelled to go back and try harder because I was exhausted by the time I finally finished each stage. It’s hard to say if this means the game isn’t for me or if the expectations were tempered by the promise and both shattered like glass when reality kicked in.

OkunoKA does have a really cool element that needs to be addressed, and that’s the ability to swap around elements. Basically, if tight jumping and running wasn’t enough, you also have the task of swapping on and off an intrinsic effect for the stages, and these affect your potential to finish the stage. For example, in the first world, it’s an ice element. There are these clouds that exist that you can toggle to be solid ice or intangible gas, and it happens at the press of a button, a drop of a hat. This made for some really cool stages, like being able to, VERY quickly, jump, turn the ice off, crest the cloud, turn it back into ice, and jump again before a demented logging machine murders you to death. As much as I hate how hard it is, I have to admit this implementation of the environmental control in order to succeed was very cool, and works very well on the Nintendo Switch. 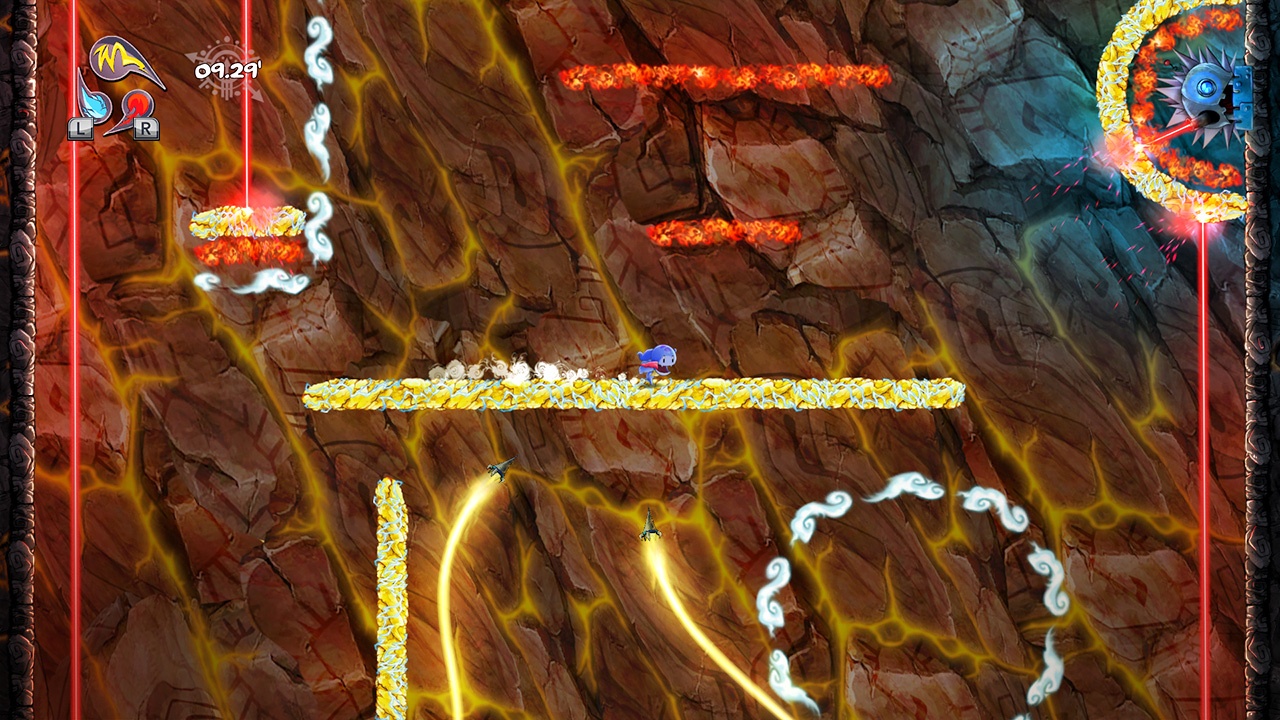 At this point, we should mention that OkunoKA is a Switch exclusive, which is a hard situation to be in for an indie dev. When a large-scale, well-known entity puts out something exclusively on one machine, like Nintendo or Ubisoft with their Mario + Rabbids game last year, it’s appealing because you know a ton went into it. And I don’t mean effort, I literally mean money and assets. It’s a sad state of affairs but here we are. Indie devs, on the other hand, have a hard time fully making their case for exclusivity. On the one hand, it’s a power play that could endear themselves to the bigger company, and might build some strong relationships in the future. On the other hand, it may just come across as a narrowed marketplace that’s hoping to use the right buzzwords to attract players. It’s a tough call in this case because I see the potential, but I don’t know if I quite see the draw of something like OkunoKA to the larger crowd.

Here’s my rationale, and I hope this makes sense. A game that is deliberately tough-as-nails and punishing doesn’t NEED to be dark, ugly or grotesque. But it does need to carry its weight properly and call to the crowd. Ka looks a lot like a mascot that should be eating candy or otherwise chomping down on something comically. The setup levels invoke immediate ghosts of Super Meat Boy past, which is a game that already exists on the Switch (along with The End is Nigh). There’s some really cool ideas here, and the levels are well designed, but they are honestly crazy difficult, and I don’t know if there’s enough of a gradual curve to draw in unsuspecting fans and then keep them interested as you boil things up. This isn’t frog soup, it’s toad flash-fry, and a lot of people will want to jump out before they’re done cooking, or even start to crisp. Yet the game shouldn’t be uglied up: the endearing tones of the world and the characters keep middling players going and did do a great job of drawing the eye.

In the end, OkunoKA is very polished, clean, runs great on the Switch and plays ball with the most difficult of time-rush platformers out there. The task, now, is for great streamers, Let’s Players and twitchers to grab this game and run with it. There’s a leaderboard system, there’s a ton of incentive to make it work, but there needs to be the right people presenting this game for all to enjoy, both in a showcase manner and in a “I gotta try that!” style. Do not be fooled by the cuteness, know that it’s hard, and be prepared, and you’ll have a great time. If you make a mistake and get this because it looks innocuous enough, you’re in for a world of hurt.

OkunoKA is very polished, clean, runs great on the Switch and plays ball with the most difficult of time-rush platformers out there. The task, now, is for great streamers, Let’s Players and twitchers to grab this game and run with it.