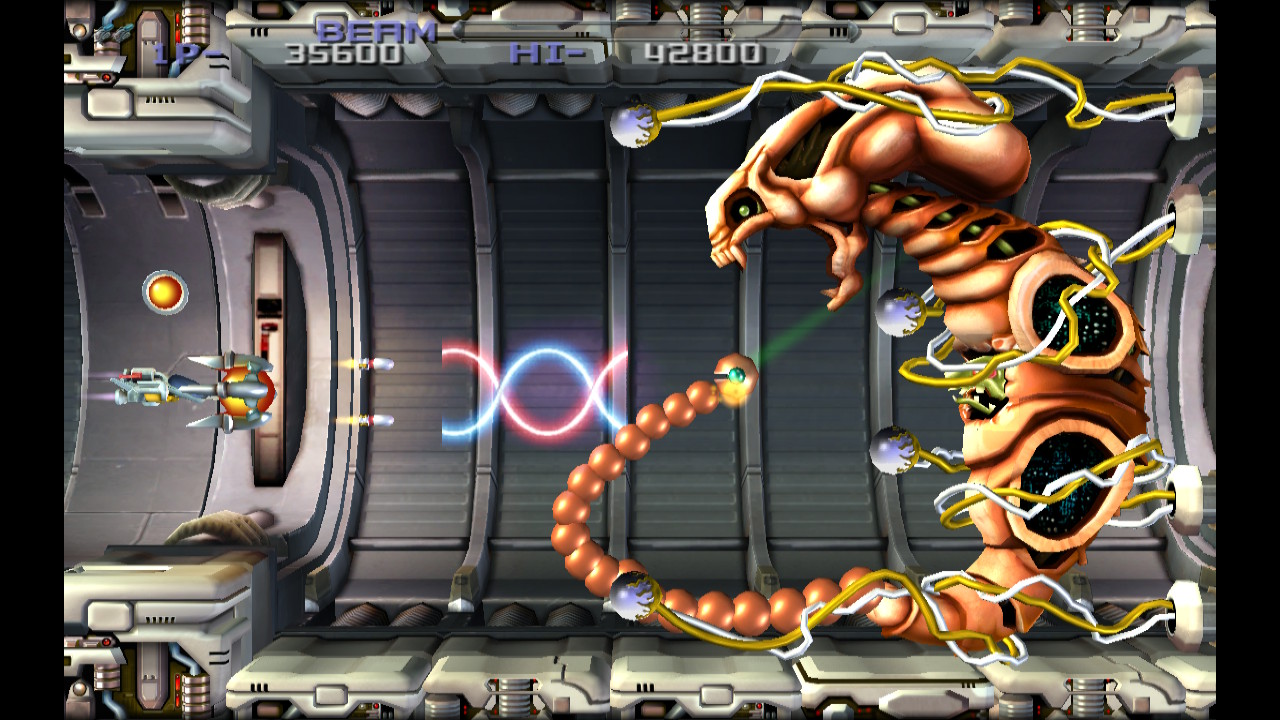 It takes a lot for people to gaze upon classic games and admit, wholly, that they could be better. Things like the original Super Mario Bros holds such a cherished position that many people emphatically ignore how truly difficult and broken the game was, simply because it opened the door to such better things. Tozai Games, who brought us Lode Runner Legacy earlier this year, seems to understand the reality of the situation, and wants to make a classic experience enjoyable and relatable to modern players. The result is the pleasantly updated and beautifully remastered R-Type Dimensions EX.

This is a remade package of the original R-Type and R-Type II, which were released on arcade cabinets back in the late 80s and, since then, have undergone a lot of iterations, ports and re-releases. Probably the best known one is Super R-Type, the SNES version which is half inspired by R-Type II and half original concept. The whole series follows the adventures of an experimental space fighter ship, R-9, as it combats a mysterious but definitely hostile alien force called Bydo. Flying through several levels of assaulting crafts, creepy bio robots and monstrous bosses at the end of each stage, the R-9 has its work cut out for it. Luckily, like all great space operas, random ships will drop power ups that allow the R-9 to shoot extra weapons through a little orange add-on sphere called the Force. You also have to make a call whether you’re a scattered kind of gunner or a precision shooter, either using a series of short, weak but constant bullets or a powered up, railgun-esque single shot. There’s plenty of strategy involved, and both games incorporate tons of points and opportunities to get the highest score. 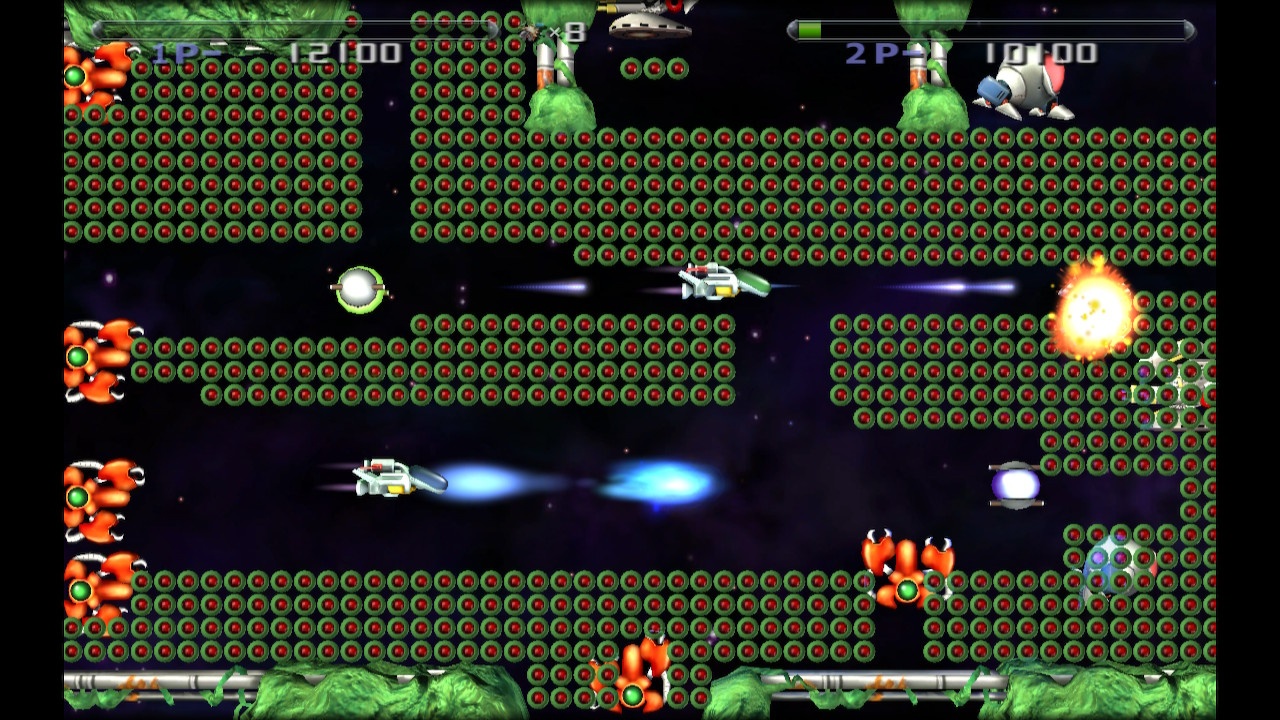 The main focal point of Dimensions EX is all the extra work that’s gone into making the game positively gorgeous and new. Through a series of graphical filters and good old-fashioned “ground up” rebuilding, you have the choice to play in the original 2D style or a shiny 3D viewing that gives brand new life to the game. The 3D itself is very impressive in the two different ways it can be enjoyed, either from a flat “2.5D” sort of effect or a new, “Crazy” mode that adds this extra forced perspective with depth and angles. It really reminds me of this emulator that’s been out for a while now that allows you to play NES games in 3D through a peculiar set of algorithms that I simply do not understand. Playing R-Type in the “Crazy” mode certainly allows for a brand new appreciation of the game, but I recommend the “normal” 3D style. It pays homage to all the work that went into the original with the added bonus of having things be really crisp, clean and pop in a stronger way than they did on the old Turbografx-16 ports or even the cabinets. However, if you’re a stickler for the original, you can not only play in 2D, but you can even force an arcade cabinet overlay, which seriously shrinks screen real estate and should only be attempted while docked. On the Switch, the arcade cabinet reduces viewing to a little less than a slice of cheese and is less fun than you’d think.

Additionally, besides the graphics, there’s a nod to the pacing of the game and an attempt to correct it. R-Type, for all the great things it does, feels PAINFULLY slow on the roll out of enemy waves and bullets in comparison to the breakneck speed of most shmups and danmaku games of the more recent generations. Therefore, it’s only natural that we’d want to include a bit of an option to speed up the game whenever we wanted in order to get through things more quickly and to head straight to the bosses, where a lot of the strategy takes place. My one unhappiness with the ability to speed up the game is that it’s temporary: you can’t just toggle “fast” on permanently, you have to hold down a shoulder button in order to keep the game moving at the rate that you prefer best. Although, a nice tradeoff is the ability to then swap to a slow motion button if things feel like they’re coming at you just a bit too fast, and there are a couple of times, particularly in classic mode, where you might want to take it down a notch simply to see what’s coming at you and give yourself a moment to say “alright, where should I move next?”

That’s the last big improvement: classic vs. infinite mode. In classic mode, you get three lives for the whole damn game, one hit kills you, good luck, you’ll need it. Infinite mode is perfect for people coming in fresh to R-Type or those who (like me) simply prefer not to have the stressor of limited play time. You have a death count at the end of each level if you do infinite, but that’s more for high scores and competitive edges. If you simply want to experience this classic shooter, then just do infinite. I thought it was more fun, even if it did take away any sort of anxious edge that maybe some gamers lean upon and rely on. 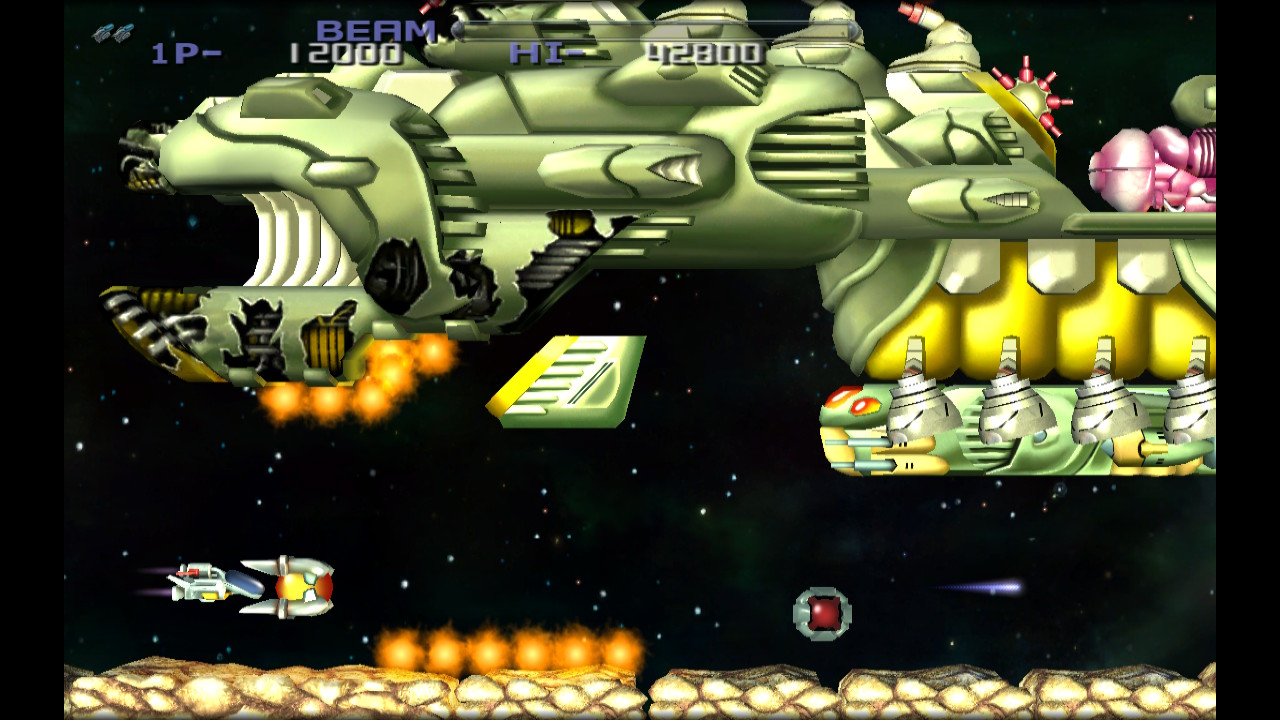 The core gameplay is unspoiled, and that might be very important to help understand the history of R-Type Dimensions EX in the realm of shooters. There isn’t anything terribly easy about the games, even with some time manipulation and an inexhaustible supply of extra ships. The alien types come in all flavors, from brainless floaters who gravitate towards you to massive ships that crash down from the ceiling, laser beams blazing. Things will crop up above, below, in front and behind you, and they will all shoot at you, and you will NEED to develop a strategy, sometimes on the fly, to deal with it all. Maybe you’ll keep your Force right in front of you, delivering the strongest weapons to the front and praying for a sweep. Maybe you’ll dislodge and stick it on your ship’s back to hopefully prevent a death from behind. Or maybe you’ll be one of those risky players who keep the Force detached, letting it act as a semi-autonomous bonus ship, knowing that you might lose it and that you are leaving yourself open to enemies in spite of power ups, simply because two are better than one. And this is all before you find yourself face-to-face with a boss that takes up half the screen, has a lot of large bullets, and its hit box is also where it shoots out murder. The games are still magnificent, and they aren’t lost in the glossy upgrade of the title.

All in all, R-Type Dimensions EX is a love letter to the series that helped inspire countless other shooters and defined a generation of arcade goers. To have this updated, smooth and honestly refreshing version on the Switch is a win for Nintendo fans, especially since this release prompted the Steam version to finally drop for PC gamers. Though it’s nowhere near as hard as the average CAVE or Touhou shooter, it still holds a great place in everyone’s hearts, and it’s worth playing on the go in a capacity that far outstrips the mobile R-Type with terrible touch controls that I have on my iPhone. A retro release with a modern backbone. That’s a port I can get behind.

A fresh coat of paint and some tweaks under the hood proves that the classic games were always good, they just needed a tune up to appeal to a new generation.