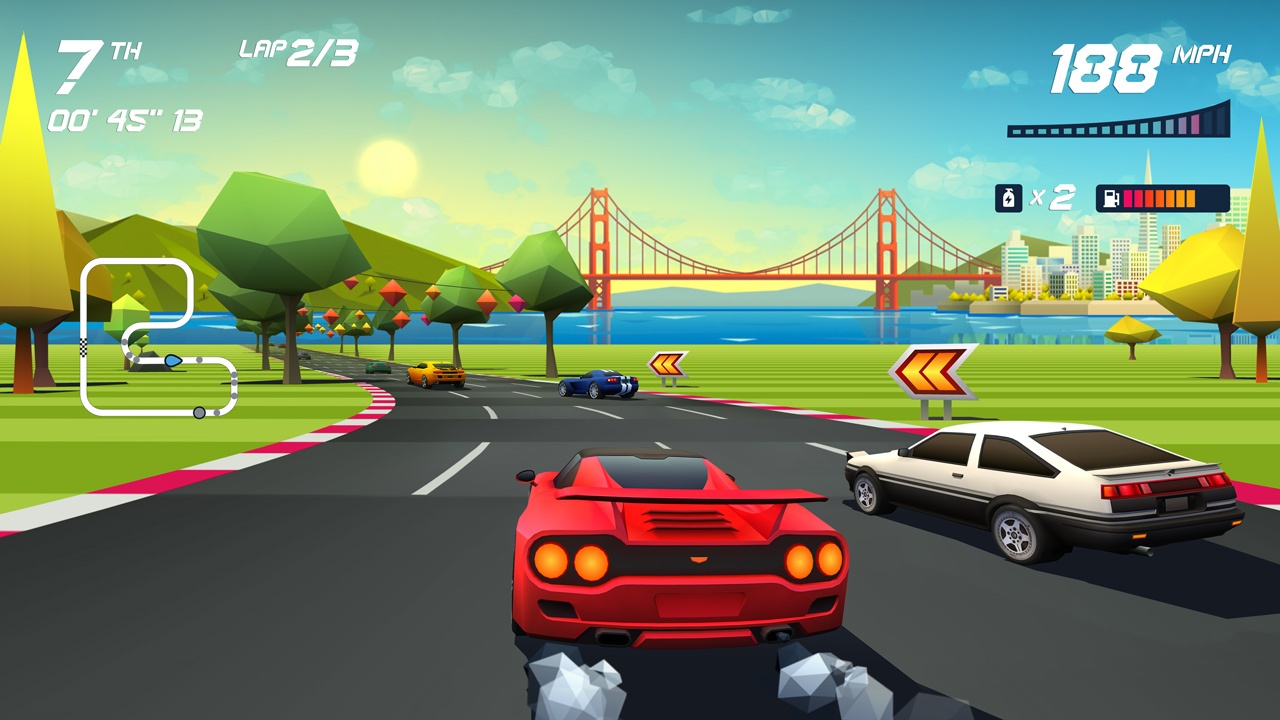 What happened to all of the arcade racers? They used to be everywhere, but beyond the now inconsistent Need for Speed and the brilliant but hardly arcade-centric, Forza Horizon series, the arcade racing genre has become something of a niche. Even simulations, which are certainly more prevalent, are far from the dominant force that they once were. So what chance does the good old-fashioned arcade racer have? When you live in a world in which the latest PlayStation console doesn’t even have its own Ridge Racer (considered an absolute given before the release of the PS4), you know the genre is in trouble.

Luckily, for those with fond memories of OutRun, Burnout, Lotus Turbo Challenge and Virtua Racing, of blue skies and outrageous handling models, Brazilian developer, Aquiris have decided to step up and fill that nostalgia void with a genuine throwback racer, one that does everything right, but by doing so, invariably delivers a somewhat antiquated (if undoubtedly enjoyable) racing experience.

As a throwback to 80s and 90s racers, Horizon Chase Turbo is an all but perfect recreation, a game that takes elements from many racers of that era and combines them to create a hugely enjoyable arcade experience. Problem is, it doesn’t do anything new. Sure, the visuals have been updated with a retro/modern sheen, but the simplistic handling, fixed car, basic environments and rather hefty auto-steer does combine to deliver what is ultimately a rather simplistic gaming experience. 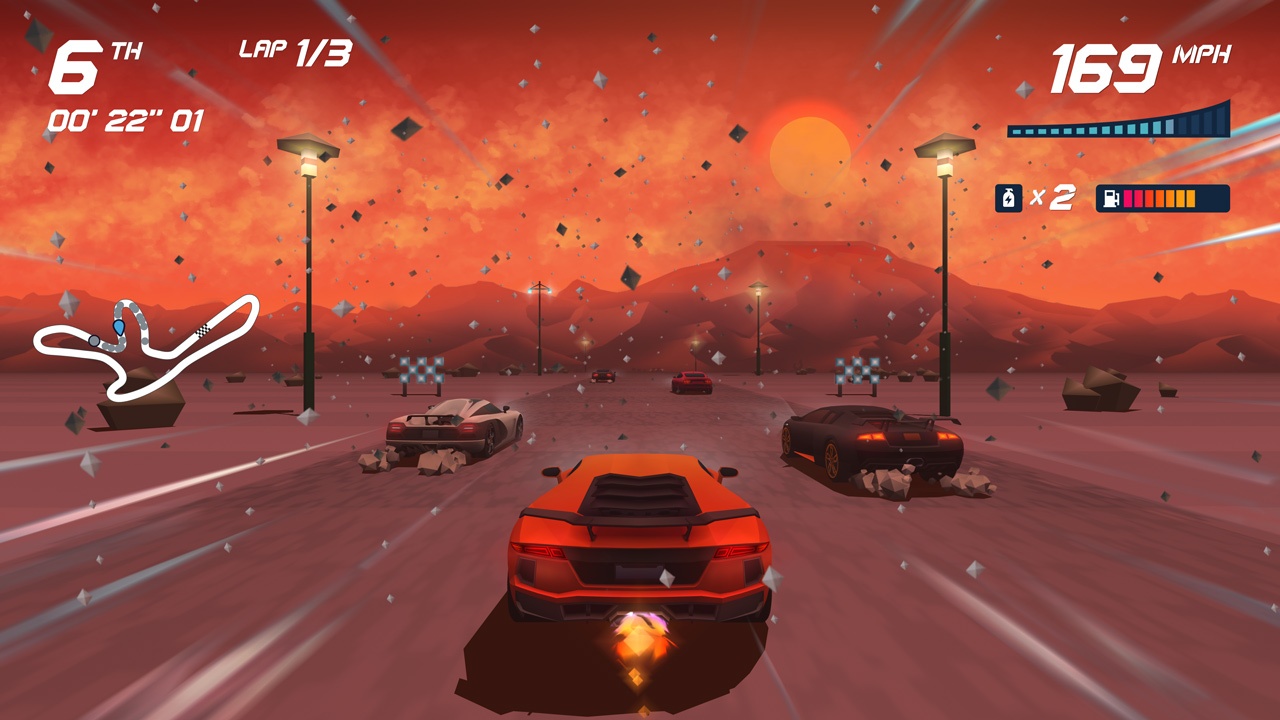 Perhaps I’m being unfair, but when I think of updated takes on a classic genre, my mind immediately goes to OutRun 2, a near perfect arcade racer (a near perfect video game for that matter) that embraced the essence of its predecessors, but combined it with modern technology and a glorious new handling model to deliver one of the greatest arcade racers of all time. Horizon Chase Turbo has no such ambitions. This is a straight up throwback for better and for worse.

Let me stress at this point – I think Horizon Chase Turbo is a great game, I just wish it hadn’t been quite so dogmatic in its adherence to the design philosophies of its inspirations. The racing is as fast and frantic as you would hope, but be warned, the handling model is incredibly basic with none of the refined power sliding found in the likes of the aforementioned OutRun 2. With plenty of steering assistance, this game is more about sneaking your way through the tightly packed traffic. Giving the slightest knock to the racers ahead of you will slow you to a crawl while sending them shooting off into the distance. It can be initially annoying, but once you reconcile with the fact that it’s what the challenge is built around, it soon becomes hugely enjoyable and incredibly tense.

The tracks too, while initially basic, soon ramp up in challenge to the point that you’ll need to successfully slalom your way through traffic while taking corner after corner at full speed to have any chance of winning. Believe me, Horizon Chase Turbo soon becomes hugely challenging as you make your way deeper into its robust World Tour mode. Simply unlocking the extra modes is a huge challenge unto itself, and with as much content as you get here, there is plenty to keep fans of the genre busy for quite some time. 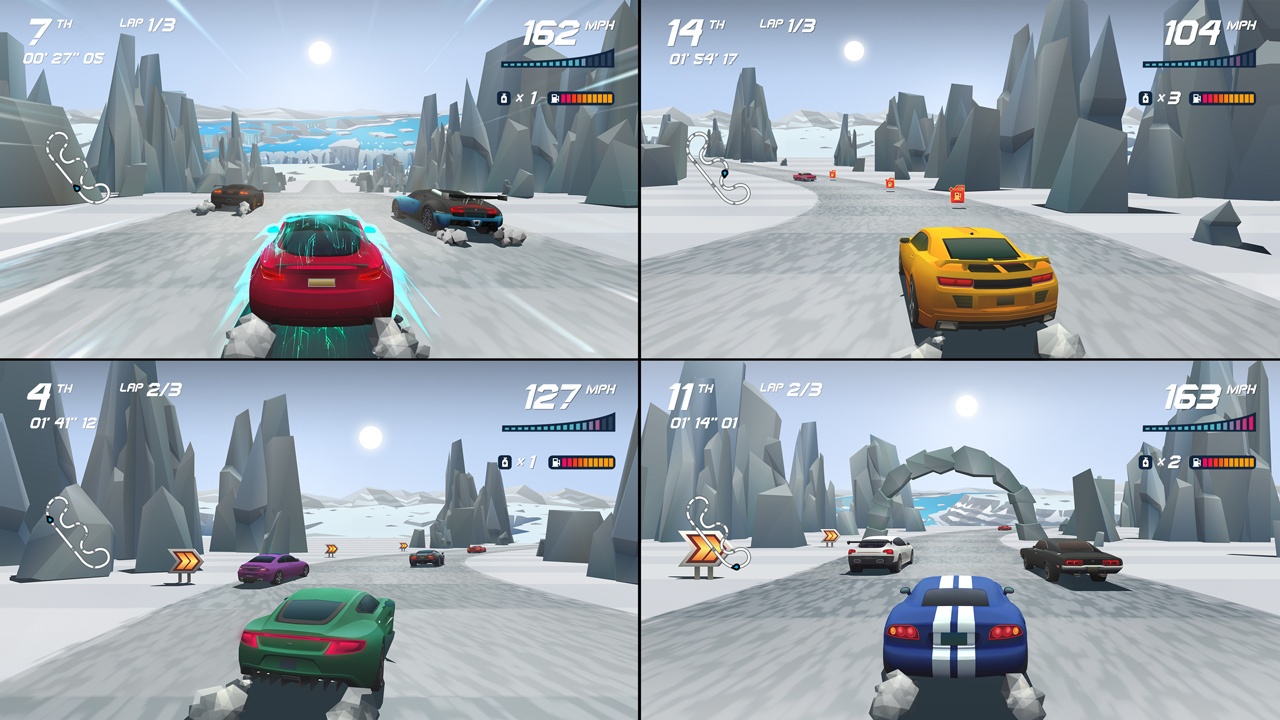 With 50 cities, more than 100 tracks and a huge number of cars to unlock, there is a ton of content here – the question is whether you’ll want (read: can be bothered) to unlock it all. This is a traditional arcade racer in every respect, and while that does make it immediately enjoyable and accessible to all, it doesn’t necessarily lend itself well to extended play. Beyond the simple fact that it becomes almost annoyingly difficult later in the Word Tour, plus the gameplay and handling model is so simplistic that it invariably becomes a bit samey during extended play.

The game is much better suited to its fantastic 4 player split screen mode which runs beautifully and is an absolutely perfect fit for the Switch. While its simplistic handling might be an issue during the extensive single player campaign, it’s nonetheless perfectly suited to quick-fire local multiplayer gaming. Yes, you can play the game online and there are plenty of online leaderboards for those looking to test their old-school skills, but Horizon Chase Turbo really is at its best when played with friends locally.

It’s arguably too dogmatic for its own good and would certainly benefit from a more refined handling model, but as a pure throwback to late 80s/early 90s arcade racing, Aquiris’, Horizon Chase Turbo delivers an almost-perfect trip down memory lane. The intentionally simplistic gameplay might be an odd fit for the games’ extensive World Tour mode, but as a quick-fire arcade racer, it ticks all of the boxes. From its Sega-style blue skies to its addictive soundtrack and pitch perfect retro-inspired visuals, Horizon Chase Turbo, while arguably lacking a bit of ambition, provides a beautiful love letter to a disappointingly dying genre and a genuinely enjoyable arcade racer in its own right.

It’s arguably too dogmatic for its own good and would certainly benefit from a more refined handling model, but as a pure throwback to late 80s/early 90s arcade racing, Aquiris’, Horizon Chase Turbo delivers an almost-perfect trip down memory lane.