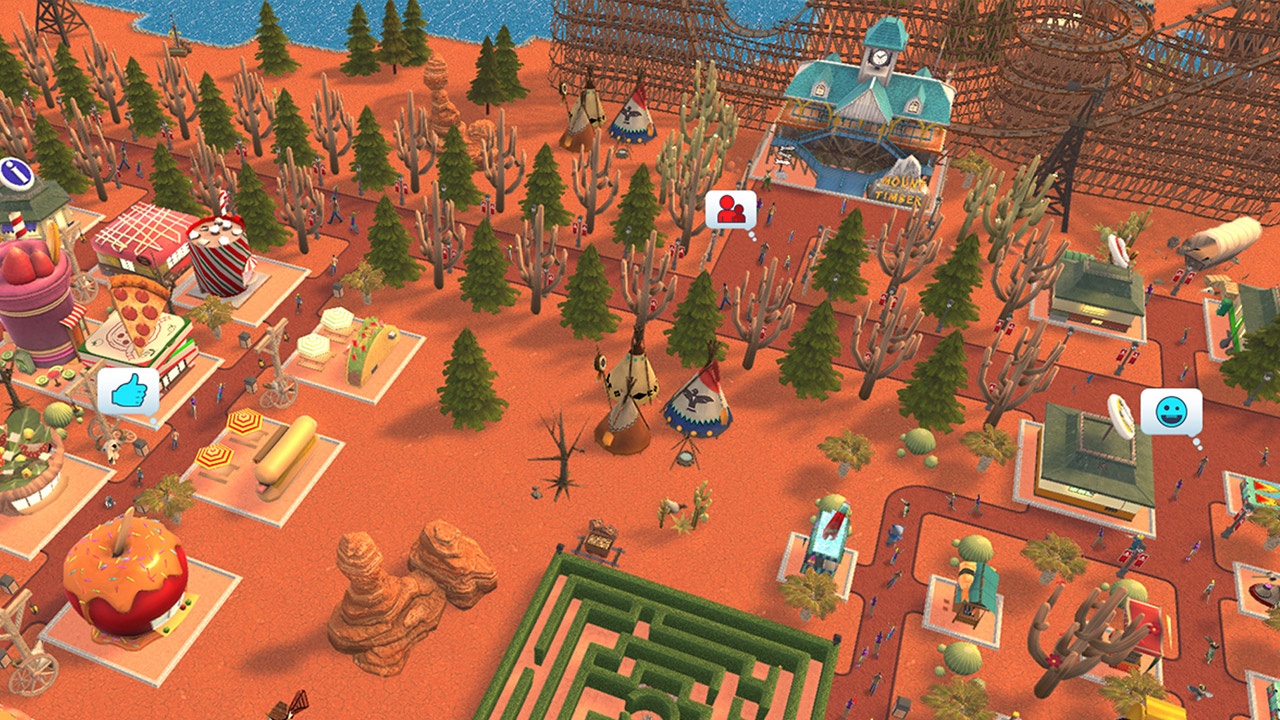 During the early to mid nineties, many of my evenings were taken up playing Electronic Arts’ Theme Park. Its simulated take on building and managing your own theme park in a variety of world locations offered an unprecedented degree of personalisation and management in producing the most lucrative and attractive theme park around. I simply lost hours of my life within this game. However, since those days, there’s never really been another title that matched its formula. Sure, there were the RollerCoaster Tycoon titles, but alas, I never owned a PC at that time. Now though, all of my funfair-ing prayers have been answered as Atari’s RollerCoaster Tycoon Adventures swoops a big-dippered release on the Nintendo Switch and once again, I can indulge myself in the creation of my very own theme park.

If you’re familiar with either of the Theme Park or RollerCoaster Tycoon games, then you’ll instantly feel at home here. Although essentially a port of RollerCoaster Tycoon Touch, which was released on mobile platforms, this title has removed the need for micro-transactions, presenting the complete package straight out of the box and a variety of scenarios and modes with which to play through. As well as a tutorial to walk you through the mechanics of the game, although I felt that this was a largely unhelpful teaching and in some instances, almost broken, you get to play through adventure and scenario modes, as well as a sandbox mode where you can build to your heart’s delight.

Being ported from the touch version of the game, this Switch edition makes full use of its touch-screen capabilities, as well as implementing a conventional control method by using the joy-cons. These varieties in control methods provide a good replacement for the originals mouse and keyboard style of play. Zooming in and out of your park, panning cameras around and building and placing rides, paths and buildings are superbly implemented here. With each selection of building or material, a zonal highlight shows where the most viable positions of placement can be made; with some buildings even producing larger zonal grids that cover certain areas for certain jobs, something that I’ll highlight shortly. Even when you reach the dizzying heights of building your own coasters too, it is easily controlled as you adjust lengths and heights with the swipe of your finger, giving you the means to build quickly and efficiently. 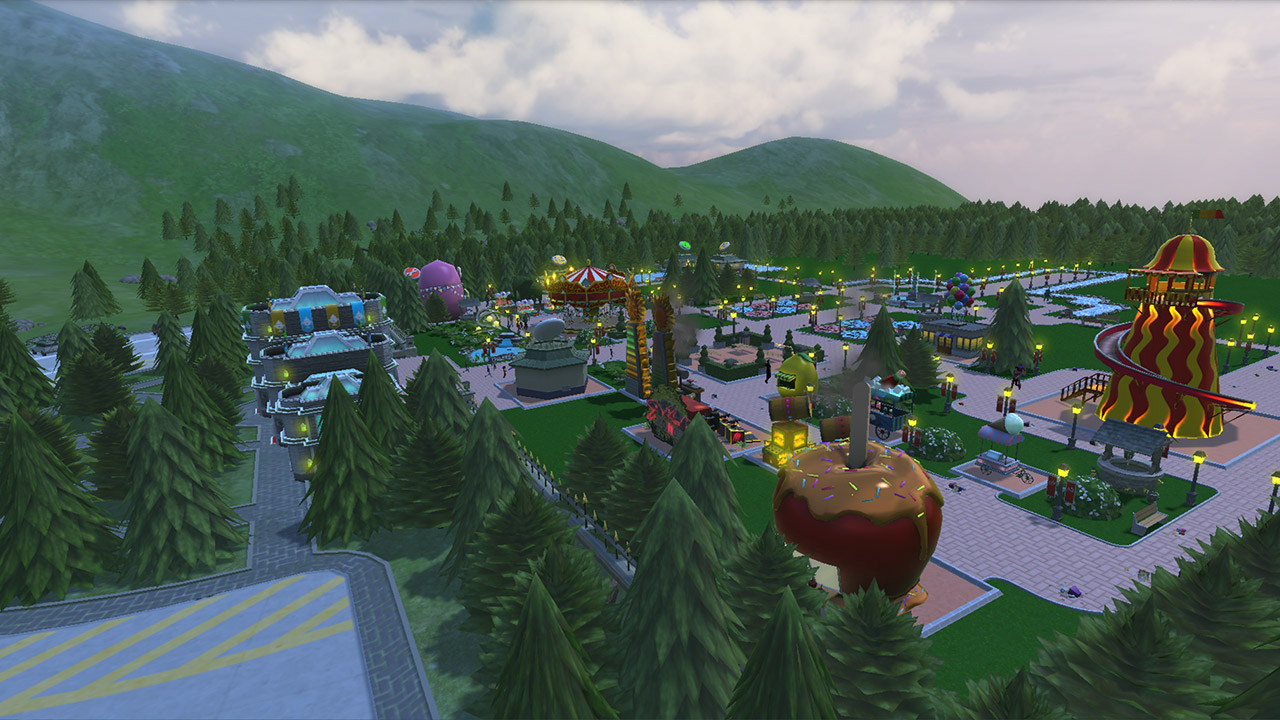 You soon learn to appreciate the control methods here, as to ensure the smooth running of your park, you need to zoom around and take note of what the visitors to your park are saying or thinking about it. If they think it’s dirty, then hire some cleaners. Too expensive? Adjust your prices. Rides breaking down? Recruit some mechanics. It’s through this feedback of the visitors, that you begin to build upon what you have developed and a lot of the fun comes in keeping up with the needs of your visitors. With each of the different modes, comes different levels of freedom and challenge. Adventure mode starts you off with a plot of land and a healthy bank balance. You begin small, but with profit-making and research, you can begin to develop faster, bigger and more interesting rides. Scenario mode offers you a variety of challenges that need to be fulfilled within a series of certain constraints that requires dexterity and offers a series of awards based on your performance, whilst sandbox unlocks everything and leaves you to build the park of your dreams.

These different modes and mechanics of the game, help to produce a game that is easily accessible to all age groups. Younger audiences will get a kick in the sandbox mode, as they build and explore their very own theme park or fun fair, whilst adventure and scenario offers a nice challenge and depth to promote longevity, but even here the mechanics of the game have been streamlined to promote a more user-friendly experience. When it comes to staffing your park, you can research, build and place certain facilities that cater for cleaning or more technical staff. Each of the buildings come with a zonal layout that shows the area of the park that is covered by this building. For instance, should you build a cleaning base, then the highlighted area will be covered by that staff, making it important that you place each build in a part of your park so that all areas are covered. This creates an automation in the staffing jobs. If a ride breaks down in the vicinity that is covered by your building, then the mechanic will automatically get to work. Although this can take away some of the micro-management of the game, it also creates a more accessible title. 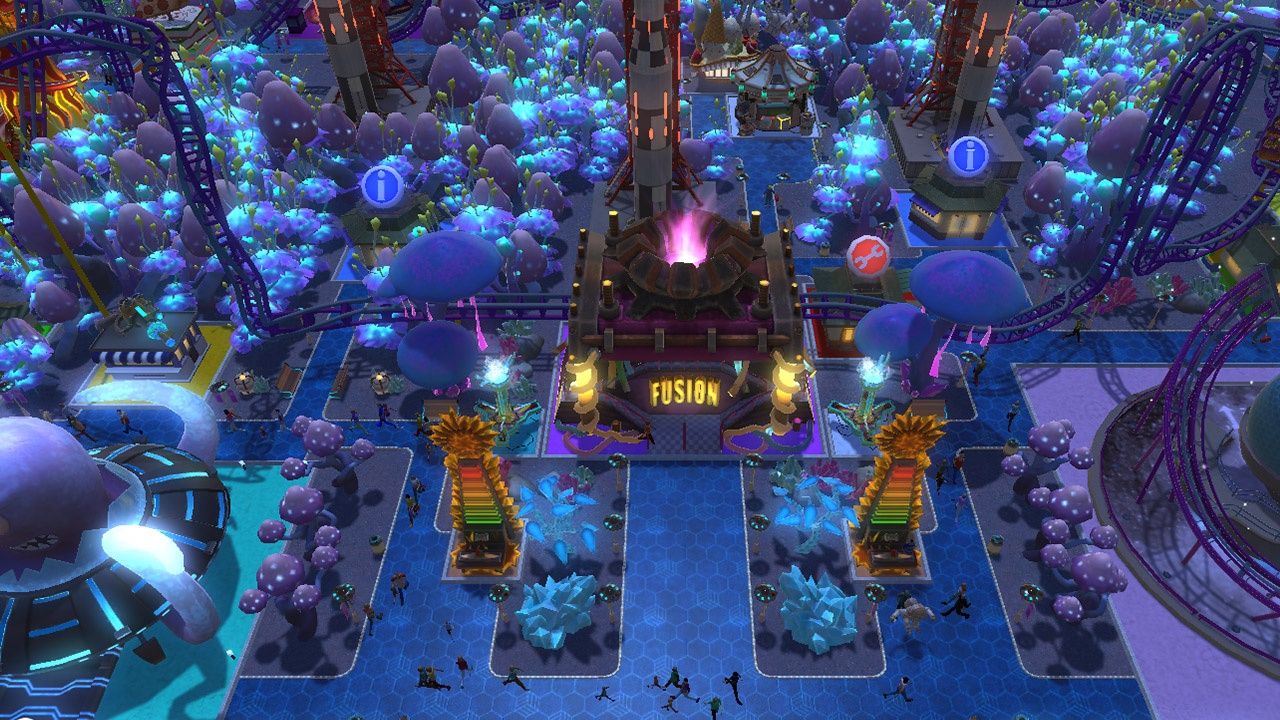 However, this can be a bit a double-edged sword. It does lack a certain depth from say, titles like Theme Park, but at the same time does produce a more streamlined style of play which does actually promote a bigger sense of fun. Building certain themed areas, tracing path layouts and just generally keeping in touch with your visitors is still an engrossing past-time. This is further enhanced with the presentation of the game itself. As your park grows, it begins to take on a life of its own that is a joy to watch. Interesting and colourful rides, all of which are fully customisable, and day/night cycles change the face of the theme park as you build it. Neon lights, screaming visitors and musical notes all add to produce quite an immersive experience.

Unfortunately though, it can also be here that certain technical issues begin to show; especially as you develop your theme park to grow. With so many animations going on at the same time, the frame-rate can begin to stutter at times when your park reaches a certain size. This was something that I experienced more in the sandbox mode of the game, as the bite-sized chunks of the sixteen or so, scenarios or the beginnings of the adventure mode, all ran smoothly with a sized park that is easily capable of running within the boundaries of the Switch. However, build your park to a level that boasts the largest of roller coasters and houses the biggest variety of rides, then you seem to lose the smoothness of camera movements and rotation; even the acknowledgement of button selection seems to lag too. It doesn’t really break the game, but it’s enough to be noticeable, although I can’t say that it ruined any of the fun and enjoyment that I had with the game.

Overall, RollerCoaster Tycoon Adventures is a welcome addition to the Switch’s library, despite containing a few elements that won’t quite fulfil everyone’s needs. In terms of gameplay, there is a lot of fun to be had in building and developing your park, as well as playing through the various scenarios that the game offers you; even the kids will have a blast in the sandbox mode. However, although containing a good level of depth, it may not be quite deep enough for some; especially if you’re a hardened fan of the series or an old player of Electronic Art’s classic title that runs along the same themes. Saying that though, it is a game that looks good, sounds good and offers enough to lose yourself in its magical world for hours on end. A few technical issues can get in the way, especially in its chugging frame-rate and laggy responses when too much is going on at the same time, but it never felt frustrating or infuriating. Much like a real-life roller coaster, there’s a lot here that’ll take you to towering heights, but there are also elements that make you plummet with a stomach-churning groan.

A game that’ll take you to towering heights, but also contains elements that’ll make you plummet with a stomach-churning groan.