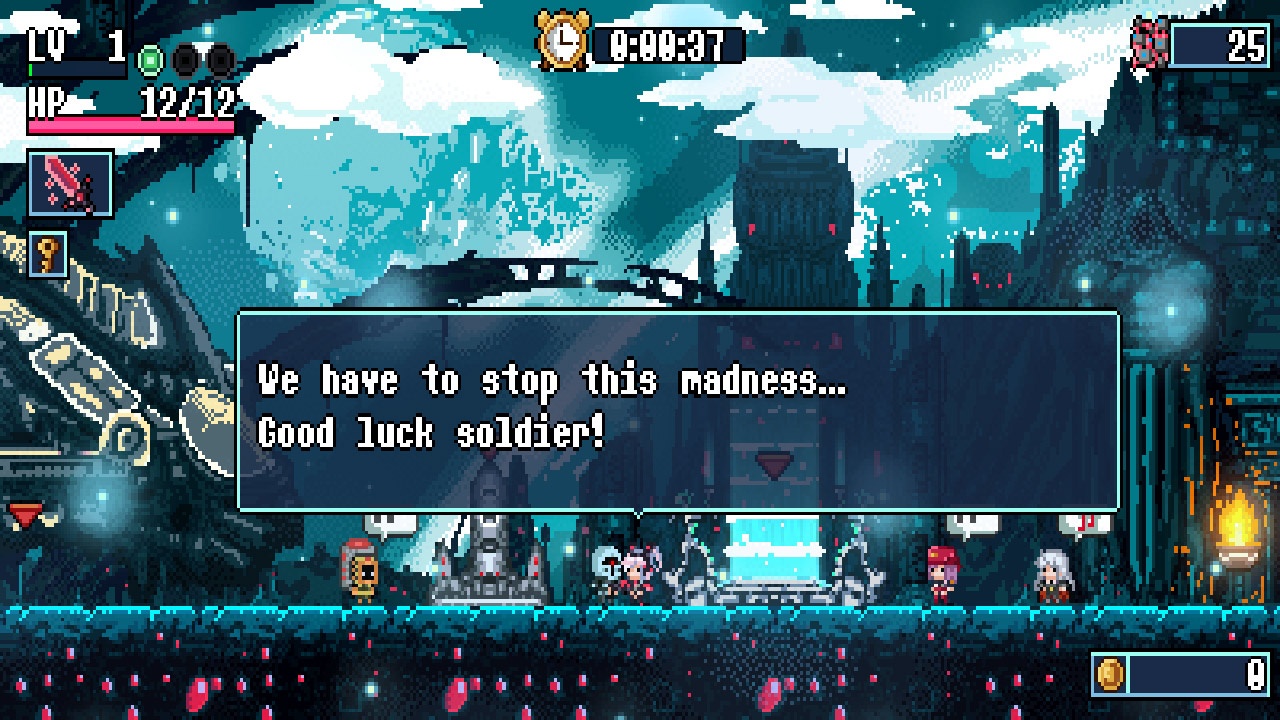 Well, well, well, here we are, at the beginning of something that I specifically asked for once upon a time. It’s been only about eight months since I last reviewed Xenon Valkyrie + on Steam, and I looked at it and said, and I quote, “Xenon Valkyrie would be a perfect fit for the Nintendo Switch.” So, when COWCAT dropped a review code at my feet, like a proud feline who has just stalked and killed something, what choice did I have but to dive back into the game? I enjoyed the roguelike metrovania title on the computer, so I figured we’d see more of the same in this realm. I’m going to do my best to not repeat myself too much, as there’s not a ton of change from my PC review back in April. But there are some things that need to be addressed.

Once again, we’re put in a position where a space witch is inside the moon and things are going to explode unless you kill her. You start out with three different characters to choose from, several layers of moon to get through until you reach the boss, and plenty of power ups, unlockable items, and secrets to find through exploration and explosions. Weapons can be permanently unlocked to find through the use of a special currency (called temmerite), and this stuff gets found from defeating mini bosses along the way or by being insanely lucky. There’s melee and ranged weapons, you can’t use the ranged weapons against most bosses, and, oh yea, the game is hard as hell.

The song remains the same on almost all these notes, but there are some important differences when it comes to the Nintendo Switch launch for Xenon Valkyrie +. Firstly, the plus should have been dropped from the name prior to launch (which is still weeks away, slated for January the 9th). Plus made sense with the Steam sale, because it wanted to differentiate itself from the original version that was being panned by critics for being broken, janky and the epitome of what’s wrong with Early Access. It totally made sense, I’m not going to dispute that on any level. But, in this case, people straight up don’t realize that there isn’t another version available for the Switch, so there’s now an expectation that it either has more content or that there’s some vast improvement from what you might find on the PC market. Nope. This is a critical misnomer within the game: it actually feels like a direct port from PC to Switch, with the added bonus that the title screen and menu graphics look drastically blown up as a result. It’s kind of ugly, but you can get over it as long as you don’t stay on the menu too long. Additionally, if you prefer proper aspect ratios, you can adjust the settings and the viewing in the options menu. 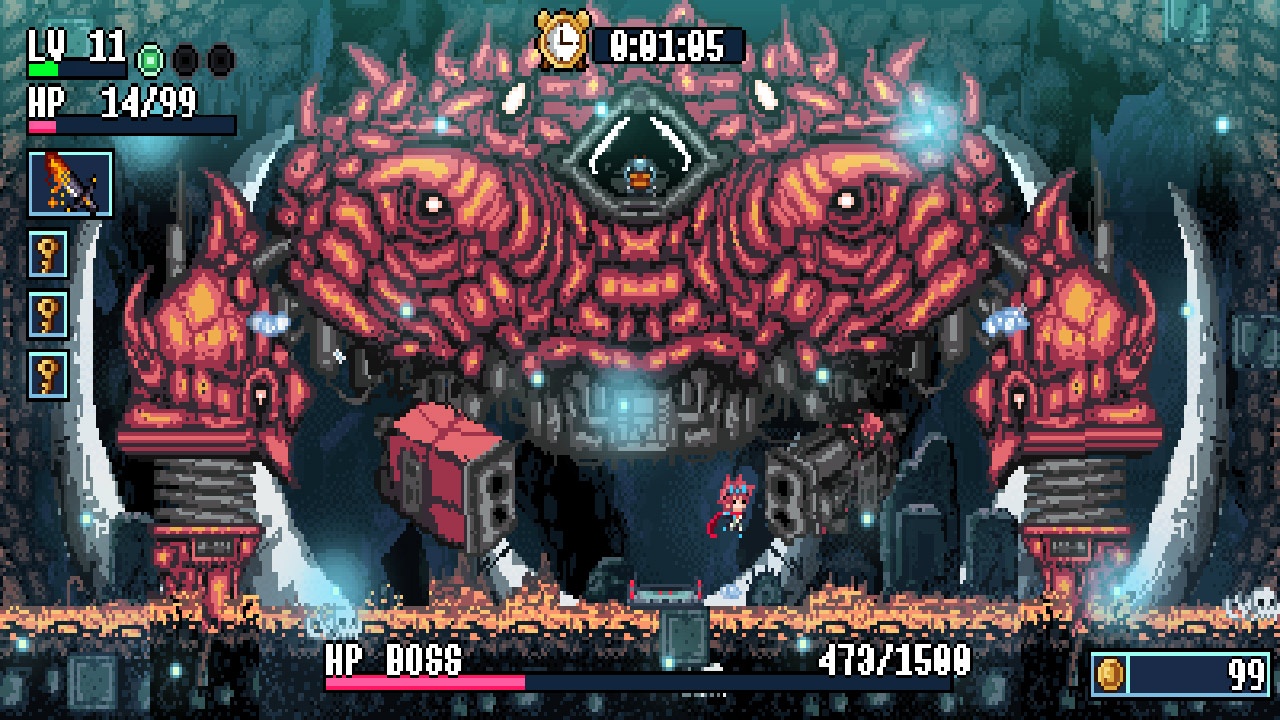 Controls have been mostly mapped well to the Switch, and my time with the Joycons has made the layout more intuitive to me than xInput in recent months. However, the placement of the blaster button way up on the X button just feels weird. I get needing to save the shoulder buttons for toggling, and having the right stick as a camera swivel, but the X is inconvenient for quickly swapping between melee and ranged attacks. In Xenon Valkyrie +, this isn’t always a problem, since players tend to be in the thick of doing one specific kind of attack for a long time, not rapidly shifting through variations. When it comes to the later stages, though, you really want to be able to drop and get onto the ranged field in a moment, because, again, we’re working with permadeath, and there’s nothing worse than to be outside the witch’s layer and get punked because you weren’t fast enough to shoot back at someone shooting at you. If it were possible, I would have put the blaster as one of the Z triggers and left L and R for the explosives and such.

On the plus side, those are seriously the limits of my complaints for Xenon Valkyrie +. The central ideas and execution are the same as their PC counterpart, meaning that you still have plenty of chances to be totally unfairly placed in a cavernous level, still need to work on understanding that spikes can be walked over, just not on, and still get surprised when enemies get killed by friendly fire from other mobs and you get the EXP. The chiptune soundtrack is still a bit tinny, but absolutely banging and you get right into the game with just a moment of exposition from some NPCS. The lack of big changes from the PC version are a boon, not a bane: the amount of documentation and helpful guides posted by fans is sure to ingratiate people even faster into the game. And, most importantly, now it’s on the Switch.

This means that the key, the unbelievable key of the Nintendo Switch – portability – allows for the game to be fully realized in a mobile sense and allow for longer, better gameplay for everyone involved. There’s some serious pushback from the PC gaming crowd regarding the Switch’s overflowing number of indies, not to mention Nintendo fans braying about shovelware and the eShop (or whatever it might be called by the time this article gets published) being an unsearchable mess, overflowing with cheap, bargain titles. But carrying a gaming laptop, even a lightweight one that can do these kind of small install pixel titles, is still much bulkier than something that’s smaller than most tablets. Not to mention that Xenon Valkyrie plays faster than most roguelikes that I invest time into. Risk of Rain, Binding of Isaac, Enter the Gungeon…these can all take a LONG time in comparison to how fast you could potentially burn through a Xenon run. Once you have enough unlocked with the temmerites and understand your theoretical pathways, you can bang out a full game in a little over a half hour, which is a damn miracle for me. 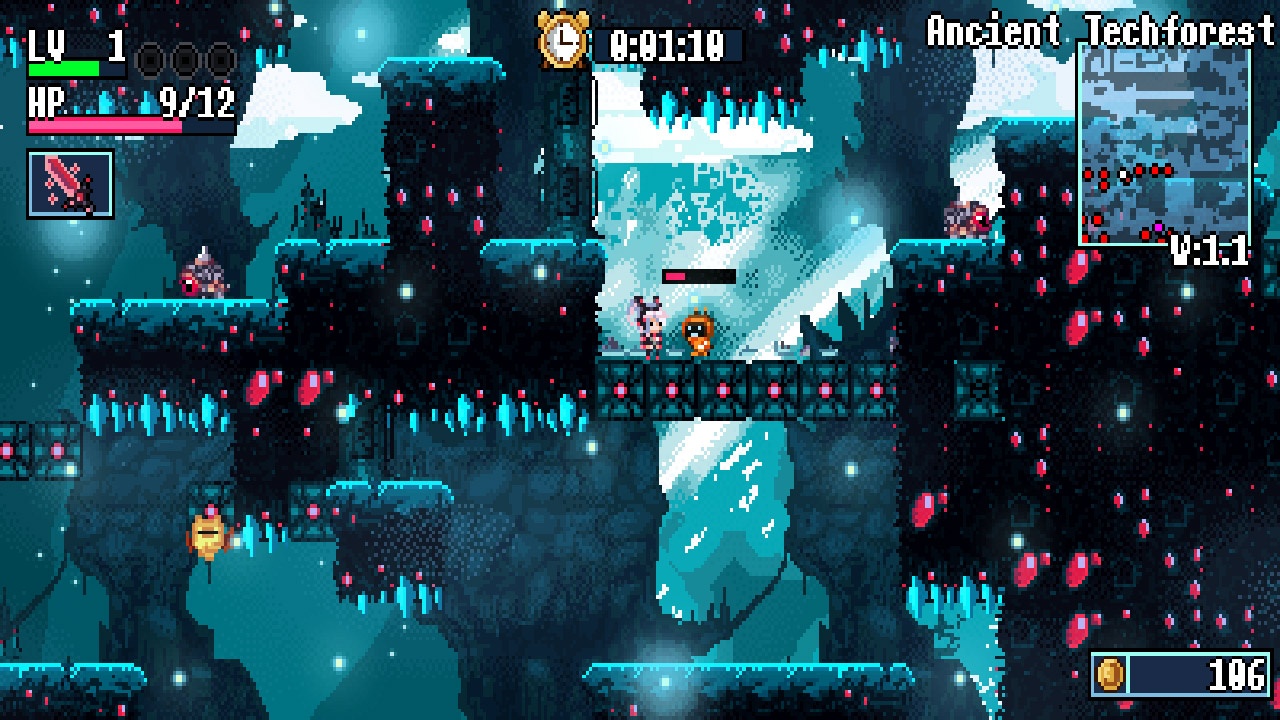 Additionally, having the game as a portable title gives me more of a chance to play and appreciate certain things, like the fact that NOT trying to get through it as fast as possible leads to a much higher success rate. By taking the time to get as much cash and as much EXP as possible on each stage, you set yourself up to absolutely stomp bosses and survive with a better build overall. The levels are often designed to try and funnel you directly to the exit as soon as possible, but swimming upstream leads to so many better discoveries, a better chance to get HP recovery, and potentially get some stage leaders defeated to grab extra keys and gain even more swag. You take the time to see how much the wealth affects your gameplay, way more than I initially realized, as buying and donating stuff leads to some great surprises. Not having to get up and walk away from my computer and being able to actually play this at lunch in my office meant I “got it” more than I previously did.

I made the call for COWCAT to bring this game to the Switch, and I stand by it. Xenon Valkyrie + is still crazy tough, and I wish I could remap the buttons, but there’s so much to be gained from finally having this game on a console that travels, that those negative points can be overlooked. I highly suggest grabbing it before the year is over: nothing quite like heading into the new year with a brand new game that might make you throw your Switch.

Xenon Valkyrie + is still crazy tough, and I wish I could remap the buttons, but there’s so much to be gained from finally having this game on a console that travels, that those negative points can be overlooked.