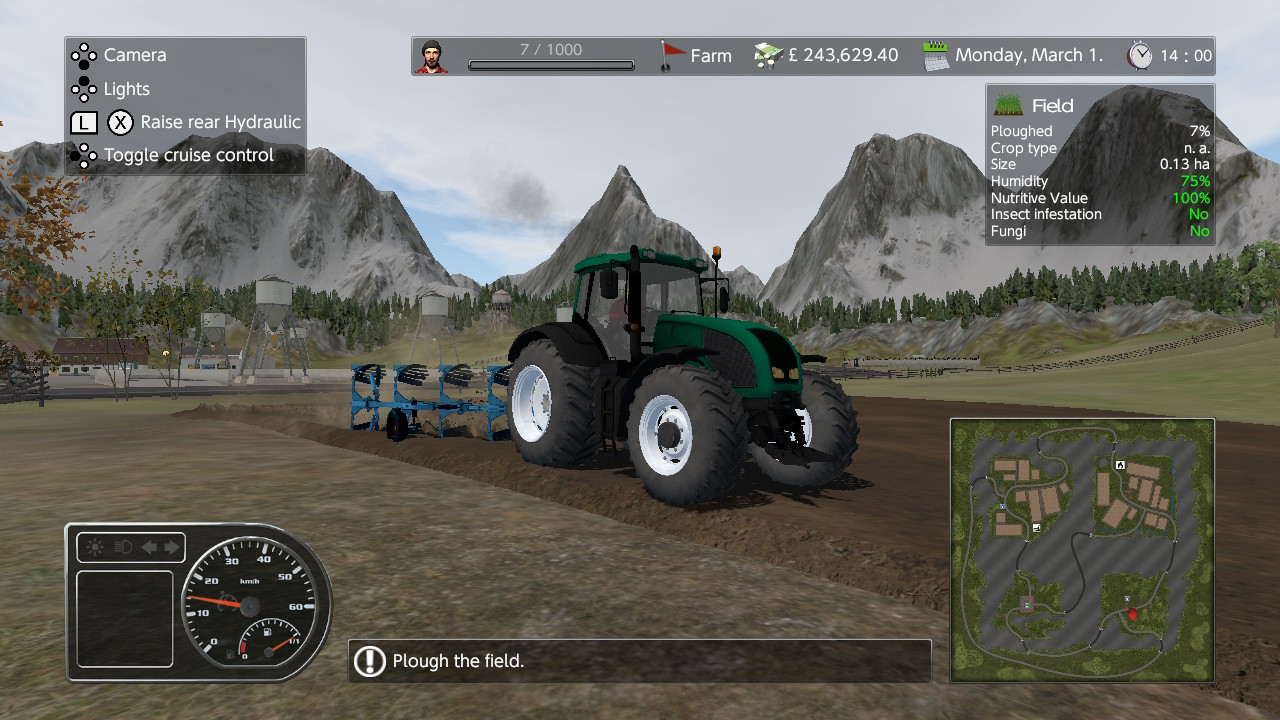 I don’t know about you, but I don’t really find the idea of working on a farm an attractive prospect. Early mornings and late nights, muddy boots and grainy hands; and let’s not even get onto the strange smells that can emanate from all manner of sources. However, at the same time, I do find something rather alluring about farm life too. The freedom of working in the country air, caring and tending for your animals and the satisfaction of harvesting a bumper crop. The same can also apply to video game simulations of working in such a premise. At first glance, it may not be a particularly exciting genre of video gaming, but by sowing the seeds of its gameplay, you can find an engrossing experience that is both fun and rewarding; something that I found in Professional Farmer: Nintendo Switch Edition.

Developed and published by United Independent Entertainment, this farming simulator covers all of the aspects that you’d expect from the agricultural life. Buying land, ploughing the fields, harvesting crops and tending to your animals. Using a variety of vehicles and trailers, you start off with a lowly field and fertilize the ground in readiness to grow your produce; all in the name of making a profit from your proceeds and buying more land and vehicles to expand on your farming empire. Okay, I agree. On paper this doesn’t sound a particularly attractive or exciting prospect, but for a relaxing experience, then there aren’t really that many games that cater for such a premise as does the genre of farming simulation.

There’s no real pressure to perform or attain the highest score or finish in first place. Instead, you can just plod along at your own leisure as you watch your farm grow and set aside some spare time to make sure everything is running tickety-boo. Of course, the main bulk of the game involves getting in your tractor and using a variety of trailers, preparing fields and tending to your crops; but there’s something strangely addictive about performing such tasks. There’s also an element of micro-management, as through a series of accessible menus, you can gain an oversight on the condition of your land and animals to ensure all are fully catered and fed in producing the best possible harvest you can manage. In terms of how the mechanics of performing such tasks are implemented, everything here is easily accessible and fun to learn. 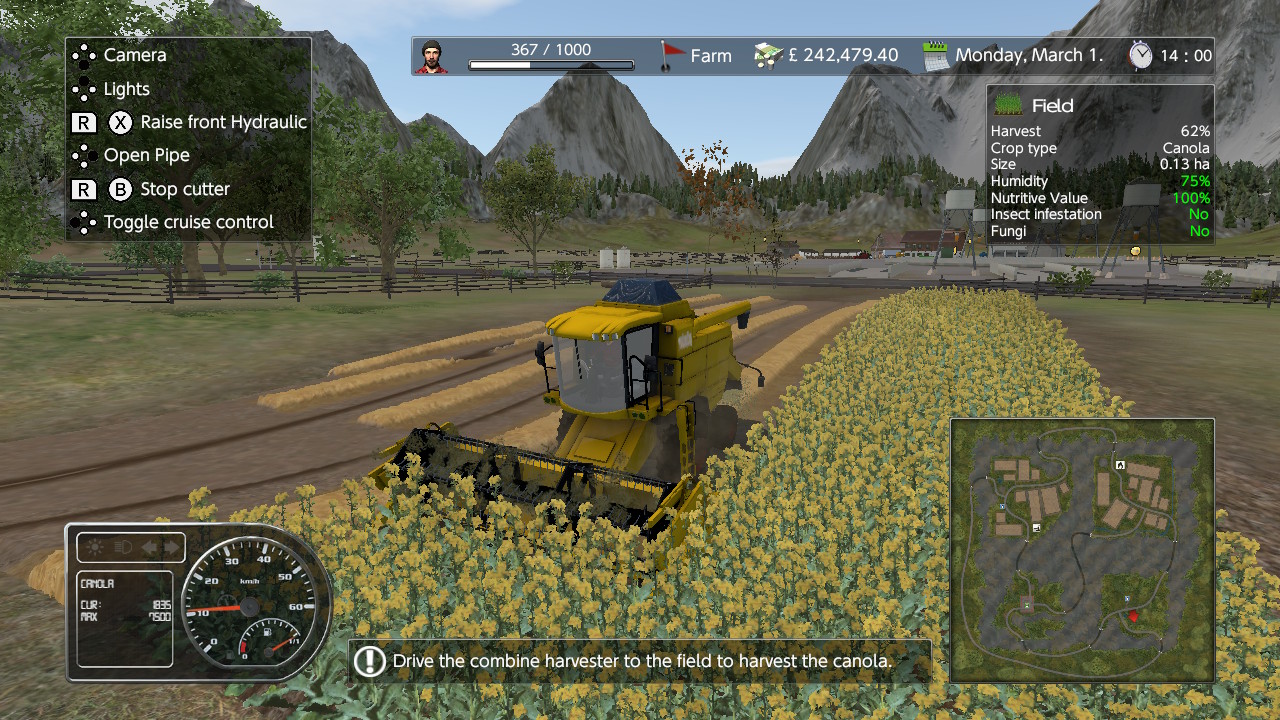 The scenery and vehicle models are nicely rendered, with a good level of detail that highlight even the smallest of things. Muddy tires and vehicle lights were just of the small details that brought a smile to my face, although other details can be just plain muddy. The textures in the varying degrees of soil ploughing left a lot to be desired and some of the landscape details aren’t perfect; although saying that, they are largely acceptable in producing a realistic setting. You can even view the area from a series of perspectives which include first and third persons, plus an overhead view; something that is especially useful when ploughing the fields. For me, it was the finer details that made the whole experience quite a fruitful one; even down to the option of owning your very own dog!

Although the game contains a nice level of detail, there are other titles that do offer more; especially in terms of licensing. However, for me, having a named or perfectly recreated model of tractor wasn’t a particularly important factor in the make-up of the game. Saying that though, I’ve also played other titles that follow the same genre which are significantly less detailed than this title and less fun to play. The overall presentation of this title sits nicely in the middle, offering a good amount of depth and gameplay and if agricultural licensing isn’t important to you either, then there’s enough presentation here to make it a worthwhile experience.

However, it also has to be noted that this is a game that can run far from perfectly on occasion with seemingly random bugs that can break the game somewhat. On more than one occasion, the game simply froze, my vehicles fell through the scenery and I often got stuck on certain objects; forcing me to restart the game and tread over the same ground. Something that muddied my boots further. However, despite this happening on numerous occasions, it ran fine more often than not. Although it can be an annoyance, its bugs never really frustrated me to the point of anger. It was simply more an inconvenience than anything else. 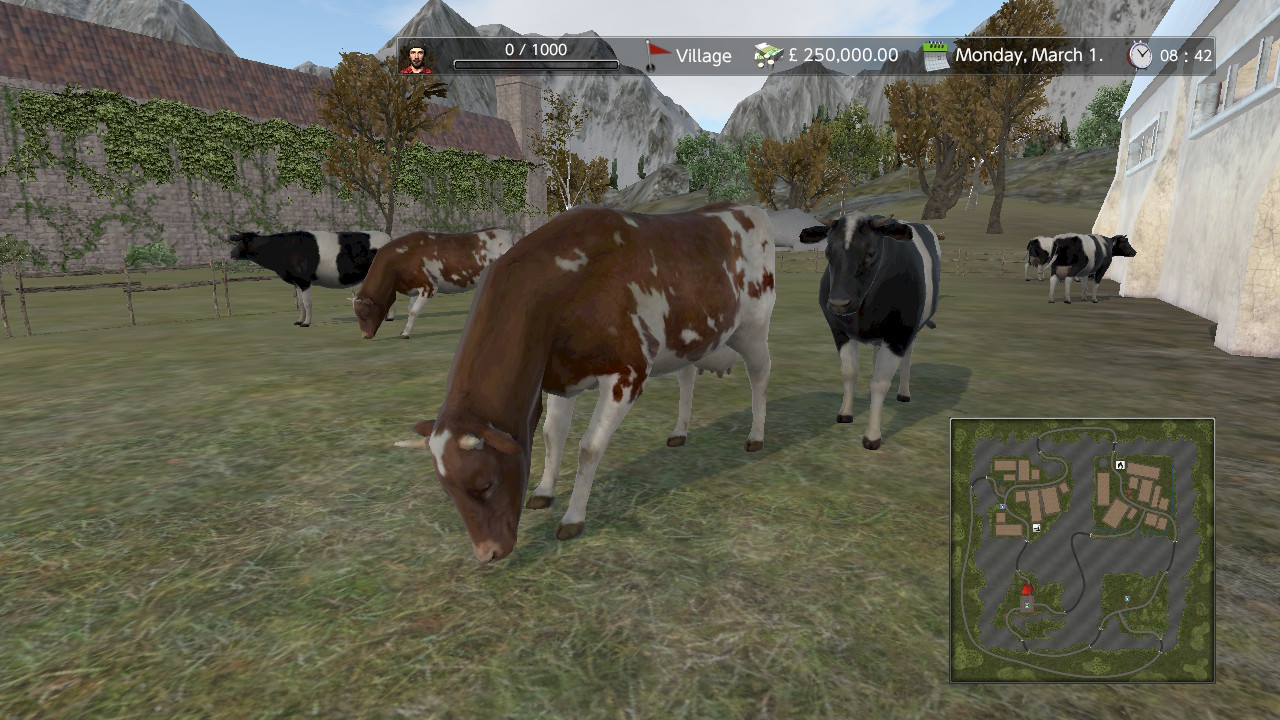 In terms of recreating life on the farm though, this is a game that excels in what it is trying to achieve. It contains many elements that make the game instantly accessible, such as easy to navigate menus that help and enhance the gameplay, a starting point that offers a helping hand in the development of your land and a control scheme that functions well. Its harvesting cycles and environmental changes are nicely recreated and the fulfilment of meeting certain criteria and developing your farm is a satisfying premise. Its level of play suits a casual style perfectly; offering a relaxing premise that contains a certain charm in what you do and strive to achieve.

Overall, Professional Farmer: Nintendo Switch Edition offers a nice change of pace from most mainstream styles of game, and also presents an effective simulation of life on the farm. It offers a nice level of depth and playability, but is also one that never gets overly-complicated and bogged down in statistics. There’s a pleasing level of detail that highlight the smaller things; although a lack of licensing could be an issue for some, especially if you are well into the mechanics of farm life. As a game though, it’s a nicely accessible title that does offer something different and although not particularly exciting, it is satisfying. It does contain a number of bugs though that can hamper your experience, but if you don’t mind getting your boots muddied, then there is lot here that harvests a good level of interest.

A farming sim that harvests a good level of interest, although a few bugs will muddy your boots.