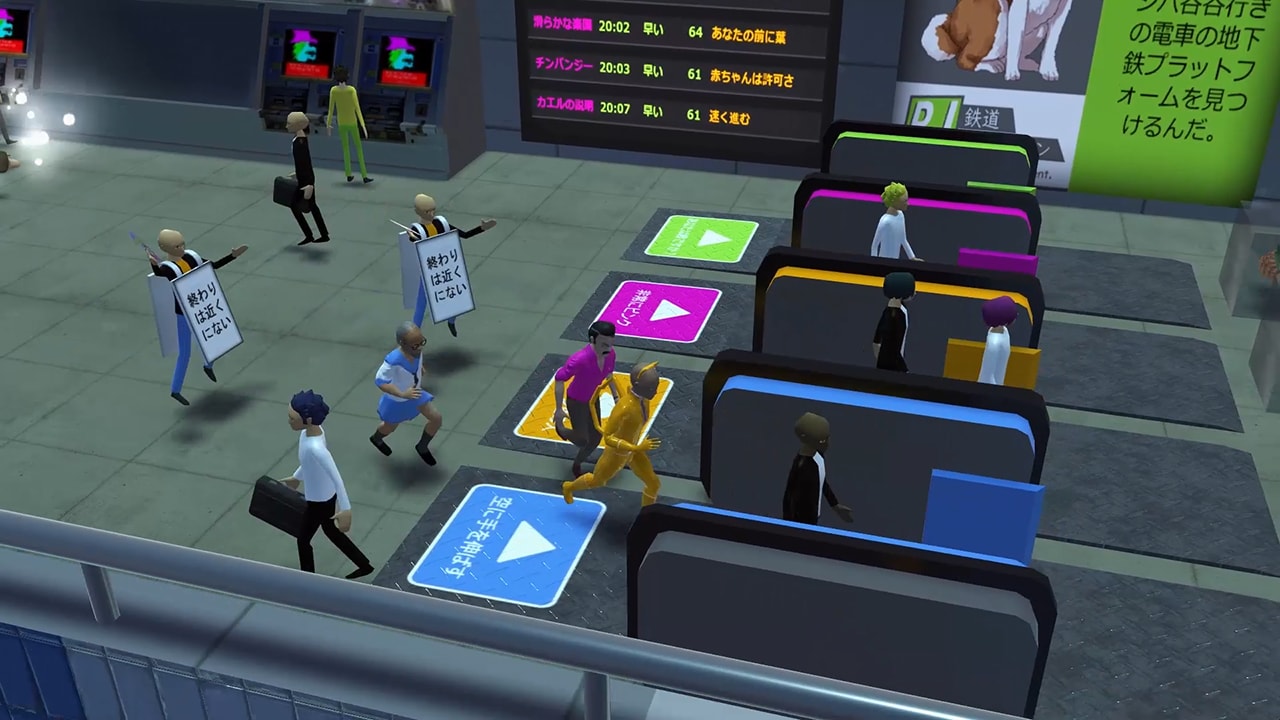 Game physics are simultaneously the best and worst things to happen to modern video games. On one side of the argument, they do allow for some truly fantastic moments of gaming realism, in which things don’t all weigh the same or have the same proportions. It gives games this gravity or choices and consequences that you wouldn’t have expected out of a game two decades ago, and the physics get better and more “realistic” with each iteration. On the other hand, since it comes down to computer code and execution, it takes only a single bug for things to go wildly out of control, resulting in hilarious (and sometimes intentional) bugs that can either add or detract from the gameplay. It was only a short time ago that Coffee Stain Studios proudly showed alpha footage of Goat Simulator to Reddit, proclaiming they would change zero bugs, and it sold like hotcakes as a result. Wacky physics shouldn’t be enough to sell a title, however, but it’s hard to argue with the idea when you get little pockets of delight like Nippon Marathon.

Nippon Marathon does have a story mode, but your best bet is to simply discard any hope of following the story right away. Part of it comes from the tradition of the Japanese ekiden, part of it is from modern marathon running, and part of it is pure, uncut insanity that is a side effect of Onion Soup Interactive’s take on Japanese gameshows. There’s this Nippon Marathon, which is a Japan-wide marathon, which has always been won by this one dude. But you’re interested in taking the crown this year, whether you’re a lobster farmer, a narwhal enthusiast, a dude with a dog’s head or any number of unlockable characters that you get from finishing versus, story mode and mini games. Playing the story mode is a fascinating glimpse into what happens when you have a concept first, a shoestring execution second, and a whole room full of paint thinner third. I won’t spoil anything, but the story mode is the best way to see all the variations of the game in a single go, and it also nets you the most amount of cash should you win, so you can unlock things faster.

Gameplay of Nippon Marathon sounds like it’s straightforward, and it mostly is. You run, you can jump, and you can choose a pathway in a 3rd person, aerial view of the course. As you run, you can also pick up fruit in boxes a la Mario Kart, and these range from pineapples that swing about you in an arc, banana peels to drop for slipping, and fruits that can give you a sudden burst of speed. The race continues until you reach the finish line or (far more likely) there’s only one racer left. In the case of the elimination, the surviving racer is given a star and the racers reset from that point. The stars are based on your popularity as a runner, and they are very, very important. They’re so important that you basically have a twenty-three page manual that unlocks over time on the dos and don’ts of being a popular contestant, and it’s worth a read as the pages appear. Not only is it informational, it’s genuinely hilarious. The humor notes of the game are incredibly consistent, and it makes the story mode worth playing and helps drive the mini games as well. Plus you end up racing ALL across Japan, from scenic mountain ranges to crowded train stations, and even across the back of the famous shinkanzen bullet trains. 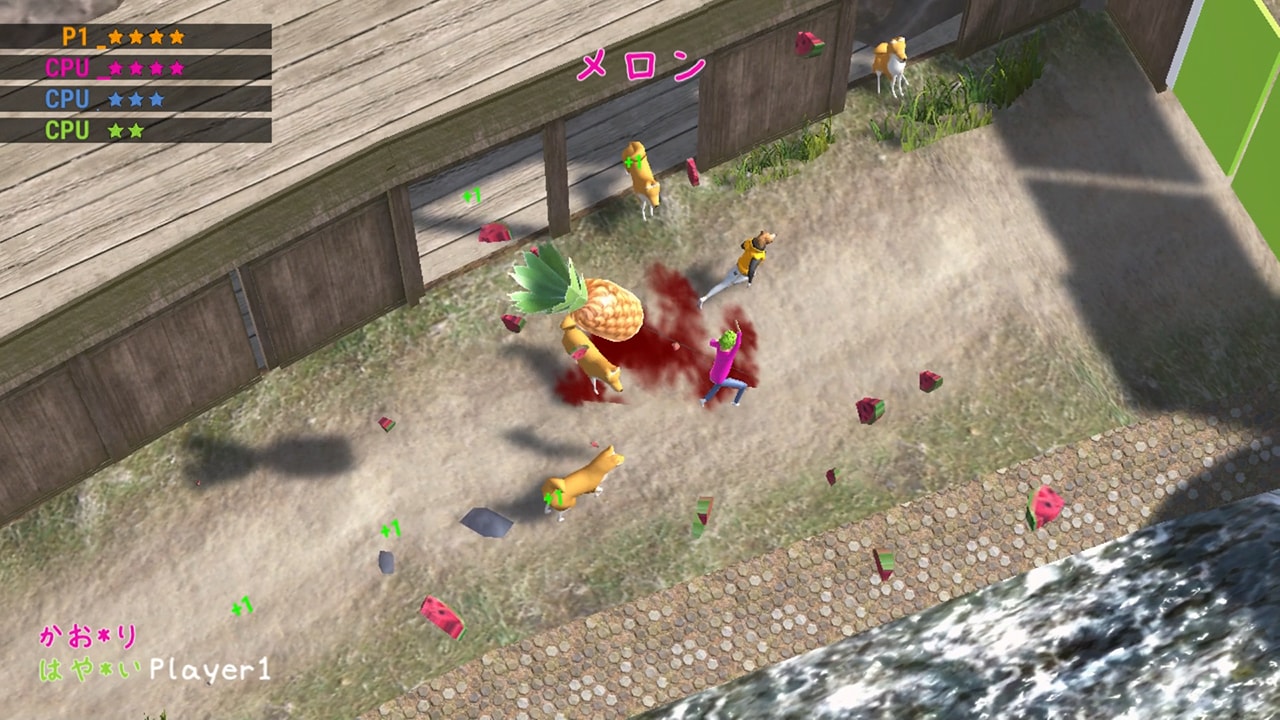 The Nippon Marathon story mode is a big of a big pill to swallow, however. Firstly, there’s a lot of dialogue in between the races to give form and “reason” to what’s going on, including the big reveal that the NNBC might be corrupt and things aren’t as hunky dory as they appear. The dialogue is great, and the whole thing smacks of absurdist humor, but you really gotta turn on the Japanese voices. The English voices sound like awful Asian “Engrish” stereotypical speech, and, if Onion Soup Interactive wasn’t somehow based in Japan, it would be in extremely poor taste. Instead, it just sounds bad, so skipping over to something else is better. Each story arc takes a WHILE to complete, and the design format is mostly to blame for this.

In order to move on with the story mode, you gotta come in first place for each race, which is significantly more difficult than it sounds. Not only are you destined to be the fastest, most accurate racer around, you need to account for various multipliers and elements that come into play. You should/need to be the most popular, which comes from eating and holding fruit, not pushing too much (but pushing mascots is okay) and doing your best not to be unappealing to the audience. Then you also need to hope the CPU is on point: if they lose too much, you get the popularity points, but you also risk the random chance events happening, like being abducted by a Japanese Australian who wants to put you in a giant maze for experimental purposes. Or getting a slot machine that may or may not penalize you. Or having watermelons rain down from the heavens in a fruity death (okay, that happens randomly no matter what). But sometimes you want that to happen, because running into dogs, taking the long way, eating a bunch of fruit, unmasking a mascot…those are all potential bonuses that give you points at the end of the race.

Lastly in this department, the game is simply not fully optimized for the Switch. Nearly every time a new element was introduced (random bikers, old men with buckets, dogs swarming out to chase you), the game lagged and froze for a moment, throwing you totally off from what was happening. This is part of the whole physics nonsense thing, which does make for a really funny and enjoyable time in the versus mode, which is local co-op only at the time of this review. But when you’re desperately fighting for first so you can do more stuff with your friends later on (and buy those sweet unlocks from the store), it’s downright frustrating. Still, I get that these freezes are part of the “charm” of a broken physics game, and I wouldn’t want them to be edited out if it meant simplifying the versus and party games to be less exciting. 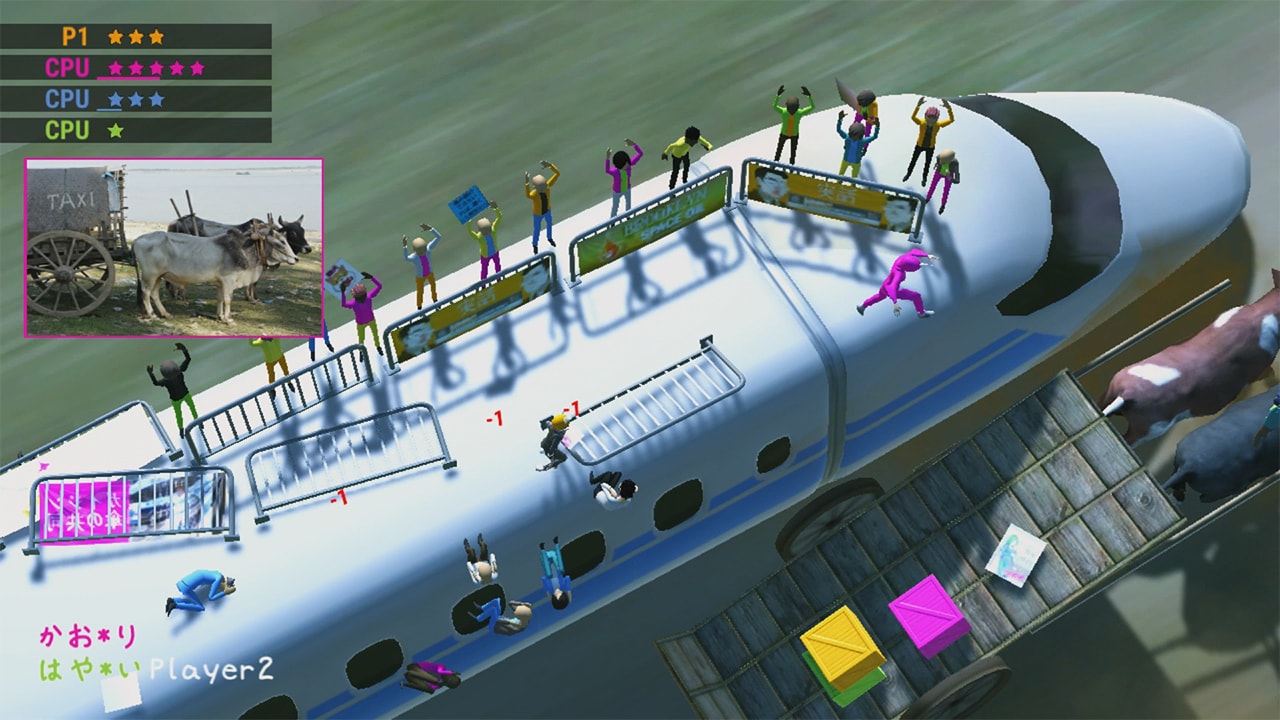 Oh yea, the party games. If you ever get sick of racing and want to do something truly bizarre, go ahead and try some grocery cart bowling versus your friends in an alley that sometimes brings out ramps, fish, and other obstacles to jam up your straight shot. Seriously, the shopping cart bowling is the perfect example of how the physics engine, the ridiculous characters, and the spirit of the Japanese game show combine into a short burst of enjoyment that results in winners, even though they may not really feel like winners. You never feel as low as you do when you miss the shopping cart and just belly slide into the pins, gaining no points and regretting your life. I hope Onion Soup Interactive considers a whole slew of mini games based on the Japanese game show element in the future, because that could be a massive hit on the Switch.

With all that said and done, I did have a seriously fun time with Nippon Marathon. Sure, it wasn’t the easiest game to play in terms of constantly not knowing where I would land when I jumped, or getting repeatedly stomped by the CPU, but it was damn funny, and winning here is a lot like winning in the old Mario Party games. If you’re really skilful, you’ll probably take the crown every time. But if you’re just mediocre or even poor, there’s a chance that Lady Luck will grin down at you, maniac-like, and grant you the winning point just because she’s chaotic neutral. Nippon Marathon could really be a winner, heading into the long winter break in Japan, and I hope the devs have a lot of success selling this endearing, utterly bizarre title both in the East and the West.

A fun and utterly frantic game, Nippon Marathon is good, could be great with some optimization, and offers a ton of replayability.