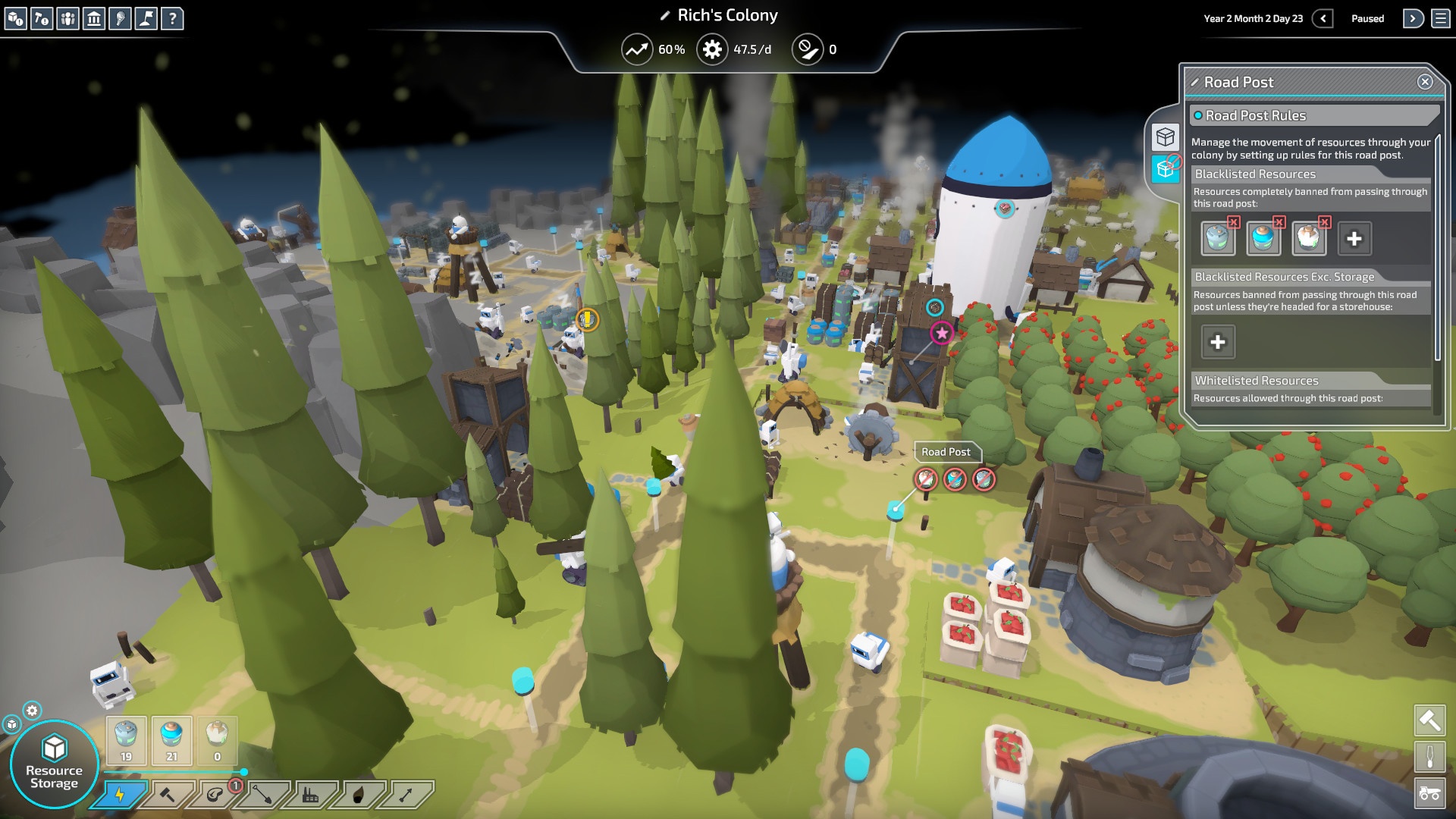 The Colonists is a management game where you’re placed in charge of a group of self-replicating robots who have decided to set out into the unknown depths of space in order to become something that they were initially merely designed to replicate, being human; or at least try to have some sort of daily lives that resemble that of their creators.

The game offers a campaign which features a total of 10 different missions, offering both more economy driven levels as well as scenarios that involve combat. Besides that, there’s a sandbox mode which lets you replay the campaign levels with a few twists. You can enable/disable fog of war, start with your technology tree fully researched or not, as well as a few other things that might be a nice addition for someone who just wants to breeze through the game without much of a challenge.

The core of the game is extremely simple, and if you’ve played the Anno or Settlers series this game will instantly click with you. You always start with nothing but a few robot workers and your rocketship, which will continuously produce the most basic resources to make sure you never actually reach a game over state. From that point, you need to build a solid infrastructure that will help you support your colony in the long run. This process boils down to not only gathering and producing the most basic things, like wood, stone, ores, and food but also expanding your territory, which is a major thing in this game. 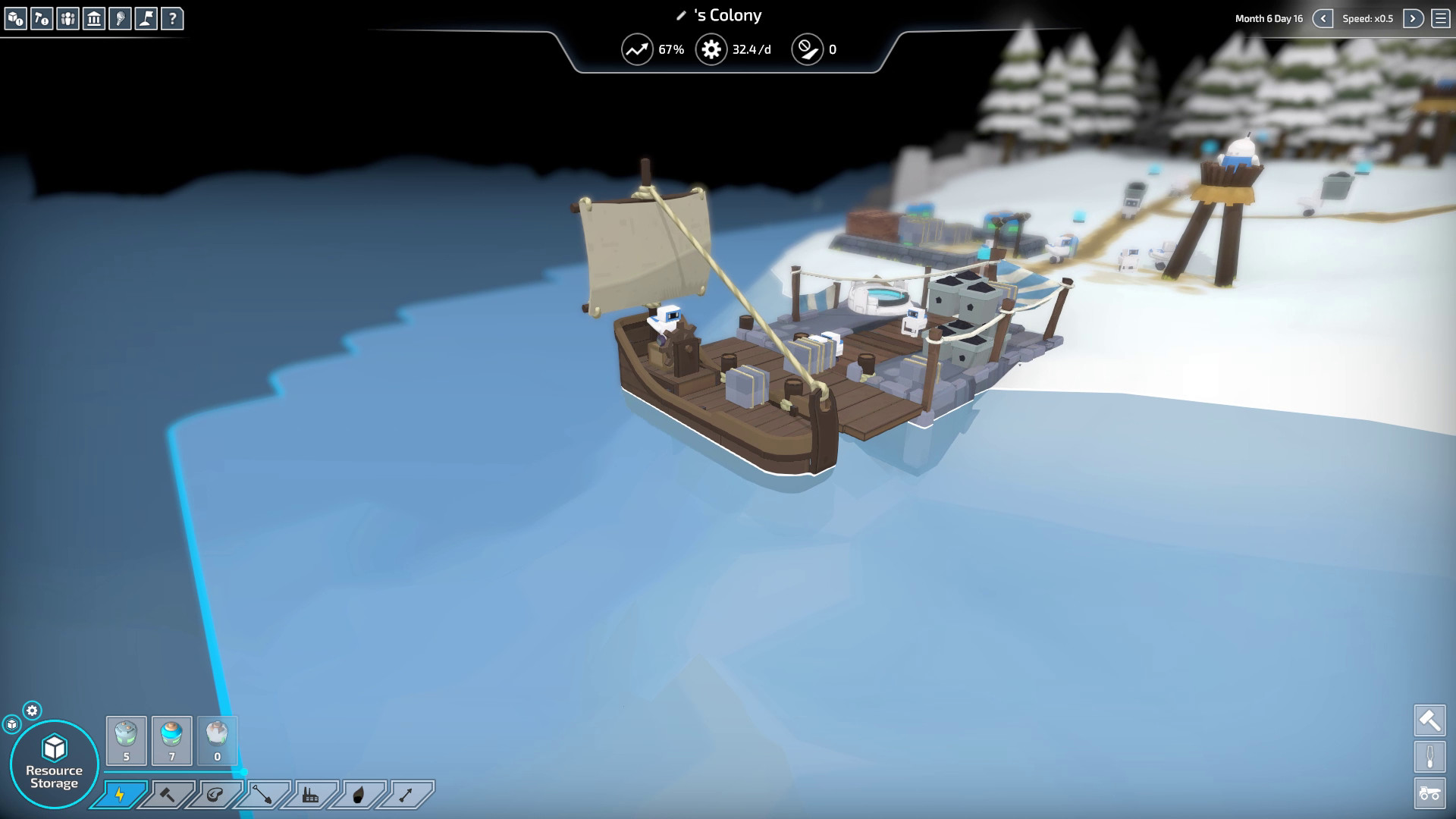 While things start fairly simple, you can quickly get overwhelmed by your entire colony if you let things get out of hand and you don’t properly manage your supply chain and workflow, particularly your road system, and eventually even a railroad system and harbors. Robots will transport resources and goods along roads until they reach their destination, but you can optimize traffic by building separate dirt paths that lead to different facilities, which allows you to make it so that those robots that are working do not disrupt the flow of traffic in the main roads.

The game limits the area in which you can build and gather resources by surrounding your colony with an artificial border. With that said, the territory can be expanded by building watchtowers on your borders, which also reveals new resource deposits that you can exploit. This means that you need to carefully use the resources on your starting area and on the areas that you progressively keep unlocking.

While building and expanding is a major component of the game, so is optimizing traffic and logistics. Initially, all you can do is build roads everywhere, but you’ll soon be able to research steam engines and boats, which also let you transport resources around the map. However, from my experience, something seems to be off with harbors, as I’ve never managed to properly set one up that actually helped me allocating resources to different places. Nonetheless, they can be useful in some maps where there are multiple islands that you can colonize. This adds an extra layer of complexity to the logistics system, as resources might have to be routed to different islands. For instance, stone and ores might not be available on every single island, thus forcing you to move them back and forth according to your needs.

In order to work, robots not only need the necessary resources to produce goods, but they also need energy to function, which is produced by other robots on residences. In turn, these residences require, quite surprisingly, food and water in order to keep functioning, and later on, they even require bread of all things. The whole game functions around these sorts of gameplay loops, tangling together multiple facilities in order to make up a complex whole. Luckily the game helps makes this a lot easier than it would have otherwise been thanks to information windows that allow you to keep tabs on things like individual resource income and demand. 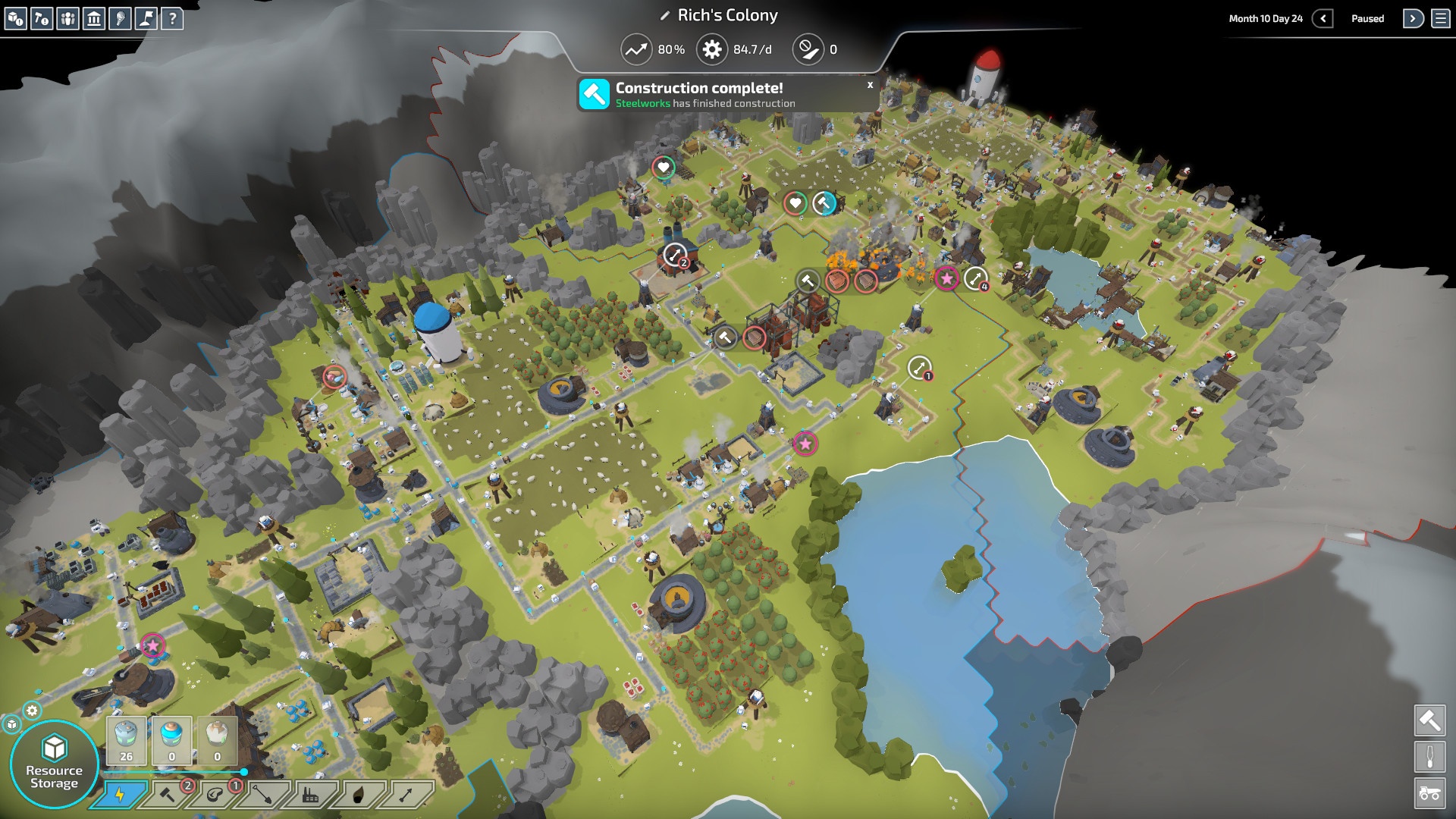 Unfortunately, one of the weakest points of the game is the combat. Remember when I said that in order to expand your territory you had to build watchtowers? Well, the combat pretty much revolves around building these. Once you research the required technologies and upgrade your watchtowers to level 2, you can make it so that they attack nearby enemy watchtowers with arrows, and that’s pretty much it. It all boils down to a game of attrition, whoever can build up more towers and keep a steady supply of arrows will win, as destroying nearby enemy towers will automatically your territory.

Besides the fact that it doesn’t really bring in much to the table, one of the biggest issues with the game is that while the game can be quite fun at first, once you’re a few hours into it, it can start to feel somewhat repetitive. This is mostly due to the fact that, despite changing the map, you’ll still be repeating the same gameplay routine over and over. Furthermore, if on the start of a mission you’ll be spending most of your time laying down the foundations of your colony and building all sorts of new buildings, soon enough you’ll just find yourself optimizing your road network and waiting until you have enough resources to build something and new researches to complete without anything particularly exciting happening.

To sum things up, The Colonists isn’t a bad game, but I have to admit that for the price I was expecting a lot more. The gameplay mechanics are pretty decent, but that in and of itself isn’t particularly surprising, given that the game is heavily inspired by well-established franchises. For around the same price, there are way better games out there. With that in mind, it’s on its own terms that The Colonists fails to deliver a particularly different and meaningful experience from other titles in the genre.

The Colonists is a cute little colony management game that fails to deliver anything meaningful.