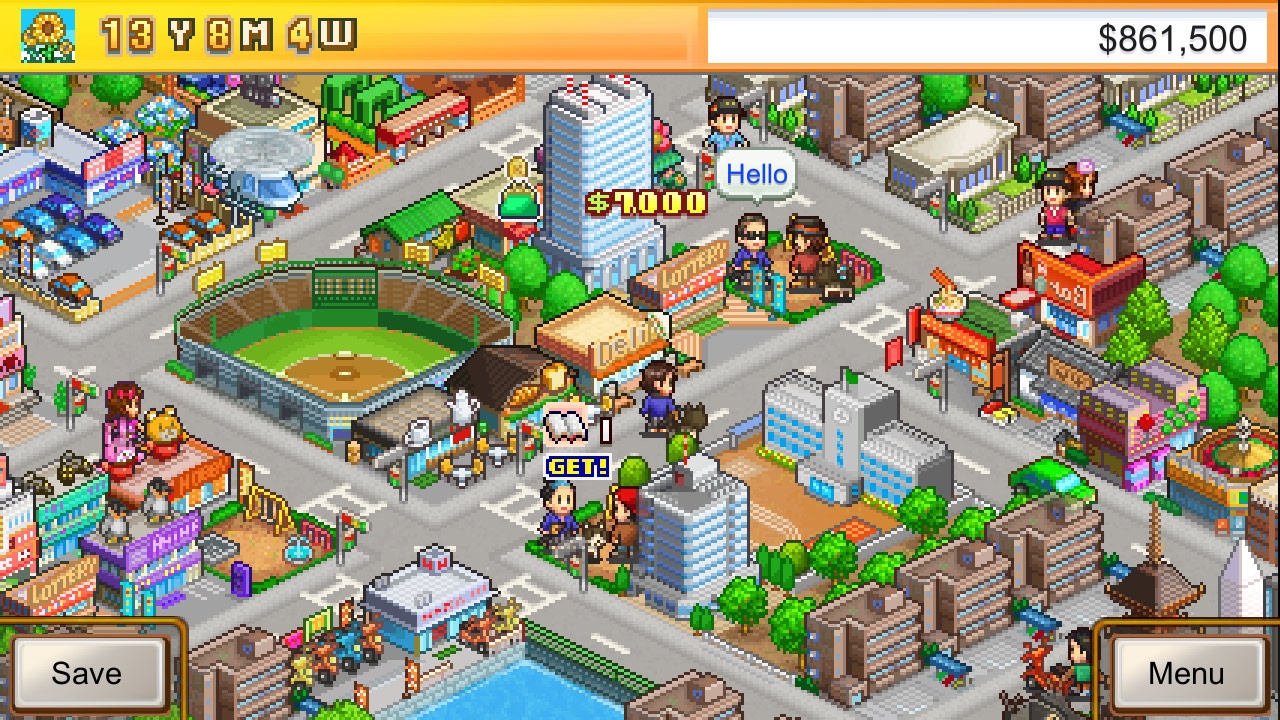 Ah, sweet, sweet capitalism. Is there anything better than being able to bilk folks out of their hard earned cash through legal extortion, blatant exploitation and otherwise unsavory business practices? Why, yes, there is: doing it in an adorable game, so that way no one really gets hurt and you can be completely insane without worrying about the government trying to jam you up. Kairosoft is such a fantastic company that constantly churns out similar ideas over and over again with small twists. As much as I love what they do, the core of it is simulation games: they simply need to help capture the idea of some kind of job (game developer, soccer manager, bakery owner) and put their own adorable twist on it. Thus, we begin the journey of Venture Towns, the cutest Sim City variant that you could imagine.

Venture Towns takes a very recognizable route, especially if you’ve played any of Kairosoft’s other games. You get dropped into a grid map, you’ve got a couple of inhabitants, and now you’ve got to build and expand your humble burb into something sprawling and terrifying. You have a theoretical 20 years to accomplish your goal of hitting a particular size and value, though you can continue to play after you hit this milestone to really see how far you can go. This game allows you to have SOME direct impact on your residents, but most of it is tangential. For example, you can build up a thousand Chinese restaurants, but your patrons will decide which ones become successful and which ones fail. You can have a ton of different businesses that will provide jobs and employment, but their inherent nature (which you cannot control) will, initially, bring them to one place as opposed to another. There can be libraries, parks, all manner of great, inspiring things, but some people will choose to flock to the casino if you’re foolish enough to build one. That’s a big caveat of Venture Towns in comparison to other city simulations: the scale means you’re really dependent on those who live there. After five in-game years of building my city, there were still fewer than fifteen people living there, and not all of them were on the ball with helping to make the city great. If you want citizens to educate themselves and drive up the value of the land around them, you not only need to provide the tools, but actively make sure they’re using them by making them appealing and removing distractions. 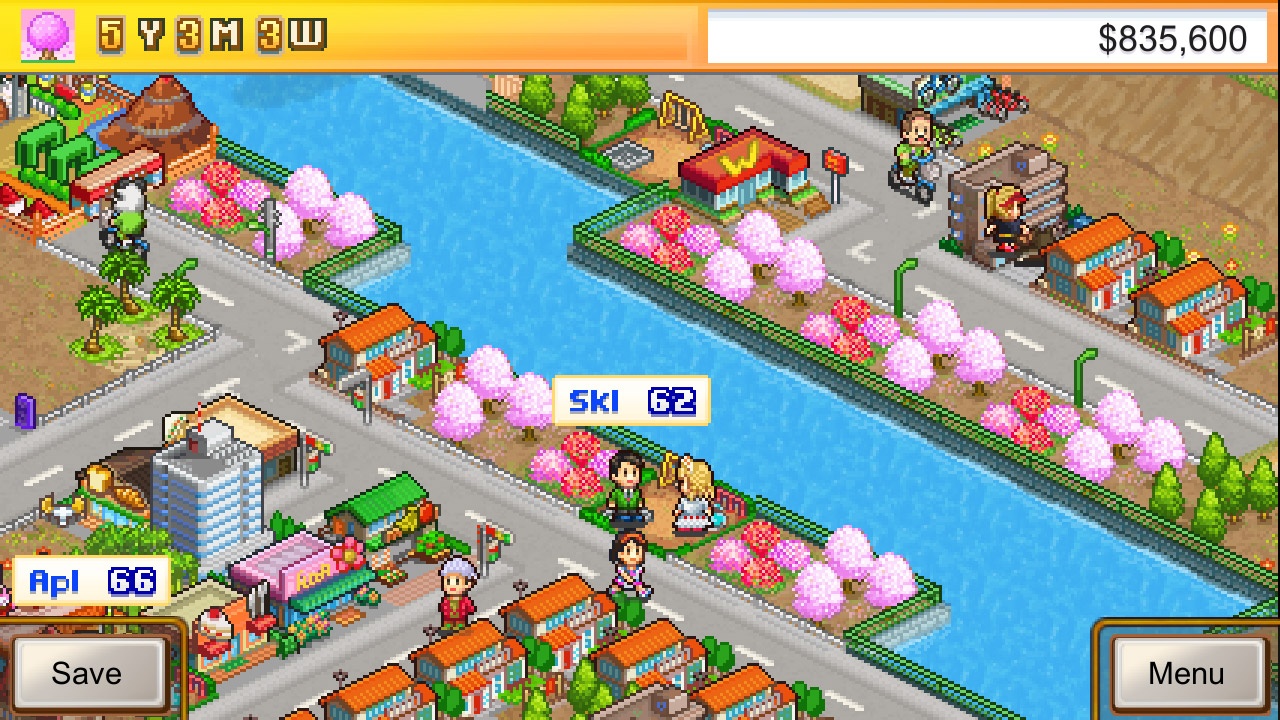 As the town expands and more people come flocking in, the Kairosoft detail really goes into effect and you begin to see the magic of Venture Towns. After a certain number of months, you can add more buildings, and you can, potentially, make residents change their jobs if they’re willing to take the risk. This isn’t like some old school board game: you apply to become a new job, and there’s a chance they won’t get it, which is displayed in a crushing animation of depression. Kairosoft does this fantastic job of making you invested in your little people, and it’s only gotten stronger and better as they continued to make titles. I honestly though Buddy Prince would be better as a dog groomer than a dancer, and, wouldn’t you know it, I was right. Then he had the nerve to ask me to build him a brick road leading to his mansion. What the hell, Buddy, I can’t do everything at once. Having the citizens interact with you as both an overseer of the town and also some kind of God really puts things into perspective, but I never wanted to crush them, only help them. This stands in drastic contrast to my time with the Sims, where punishing the digital people was one of my few rewards in a lonely high school period. I digress.

Another spiffy factor of Venture Towns is discovering the different combos that exist within your building and design world. As always, there are bonuses that come from making sure that like-type places are created next to each other: you don’t want to intermix too many strange business and home types together, because it creates chaos and inconsistencies. Not to mention some people will be really, really upset if their home is next to a dog track or some other equally loud and obnoxious venue. However, when you hit a sweet spot of putting three like-minded businesses in a row, it creates an even stronger bonus for their output. Getting three of the right restaurant, or two good vistas next to a trade school, will increase their value and also their output for those who come to visit. Some are really obvious and will net a smaller bonus, whereas the more expensive, lavish combos get a much higher yield, and can help secure a nest egg for your own when years are lean. There are even smaller combos with two buildings that don’t increase profits, but up the gains (or even lower them) for patrons of those businesses. You can probably find a total list of them online somewhere, but it’s more fun to experiment and try it out. 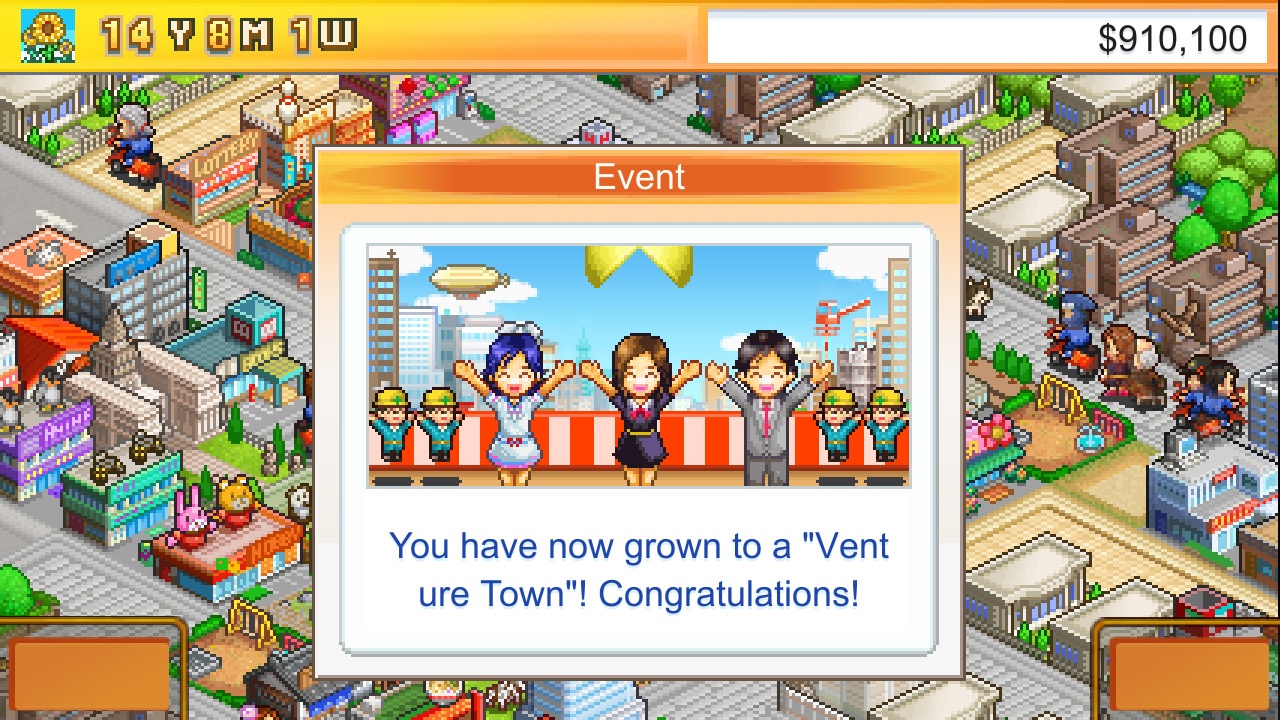 Keep in mind, with Venture Towns, I will say that you never quite get to the scope of the other games that you might find in this genre. When you think of things like SimCity, Cities: Skylines or even Project Highrise, you end up with these magnificent, metropolitan expanses that can take up several screens and require hair-pulling levels of stress and focus to ensure everything is taken care of at all times. While Venture Towns can be cash demanding at times, it’s nowhere near the level of micromanagement that you find in the aforementioned titles. In fact, Venture Towns is right in line with Kairosoft’s prime directive, which is the pick-up-and-play sort of simulation that they do so well. So you shouldn’t go far into debt – the bailout only happens once, and usually early on – but do count on things like your citizens working hard to win prizes, celebrate their achievements, and publish things to entice more folk to move into Sunny Dale or whatever you name your city. This isn’t some intense experience of praying your city won’t collapse: with minimal attention and not purposely building eighty forests, you’ll do just fine.

Kairosoft is always a good call in my book, mostly because I enjoy games that entertain and relax without being too simplistic or pointless. Some people like to match gems, others like to feed virtual pets, and others still are moving bookshelves out of Hyrule Castle for reasons I can’t fathom. For me, being able to get a small slice of a much bigger idea is a favorite of mine, and that’s what Venture Town provides. This isn’t going to scratch that itch of Prison Architect or some other large-scale simulation, but it’s quaint, it’s cute, and it’s a good port to the Switch. If you’re looking to ring in the New Year by avoiding other people and simply making sure that Tim Custard can get his dream job of cameraman, then you’ve come to the right town.

When your dream is to become a professional dog groomer, then it becomes OUR dream, citizen of Venture Towns.