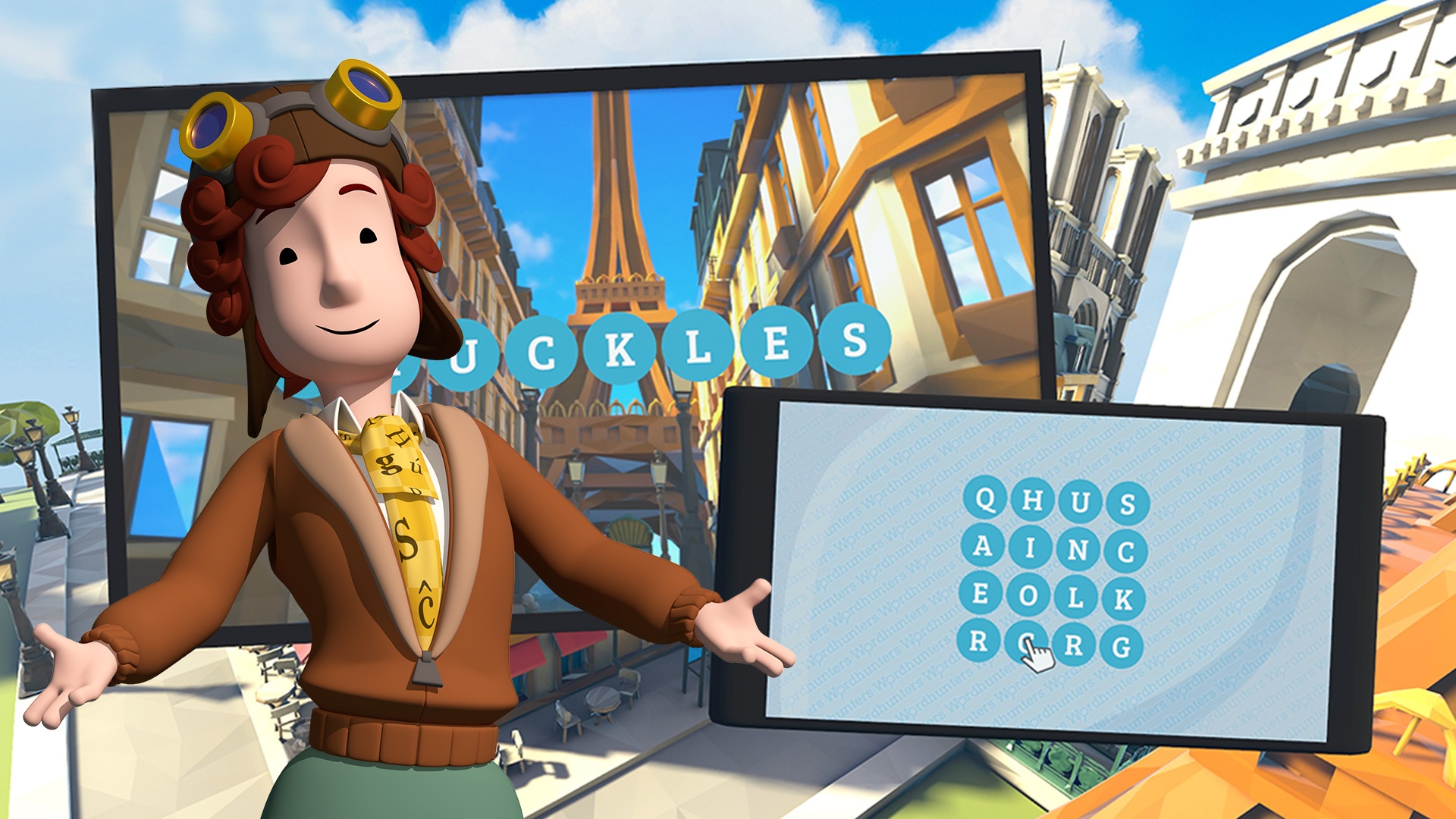 PlayLink is one of the coolest things to happen to console party gamers. PlayLink titles allow anyone with an android or iOS device to play a game together on PS4, giving each player their own private screen to play along with the game. Lots of party gamers are familiar with a lack of controllers when people come over. And hey, even if you do have the controllers, your best buddies, family members, or total strangers that found their way into your house sure love to drop them, get them all sweaty, or get food all over them.

Wordhunters by thumbfood is one such PlayLink game, and it tasks you with visiting cities all around the world to beat your competition at a slew of various word games. Many of them are familiar, like the two Boggle-ish games and a shared word hunt, but lots of them are unique. Take turns changing a four-letter word into another four-letter word by swapping a single letter, replace the missing vowels in a word, make as long a word as you can by taking letters from a conveyor belt, or remove a single letter from large words to make increasingly smaller words until a three-letter word remains.

Each game of Wordhunters begins with players creating a passport by entering your name and snapping a photo of yourself; although we got creative with stuffed animals and random junk ourselves. Each player is then sent a secret four-letter word to their device, and the goal of the game is to spell that word. Seems simple, right? Well… you can only get those letters from the names of cities you visit, and only the winner of that individual game gets to choose letters. For example, if your word is BIRD and you go to RIO DE JANEIRO and win, you choose two letters from R, I, and D and be half way to victory! 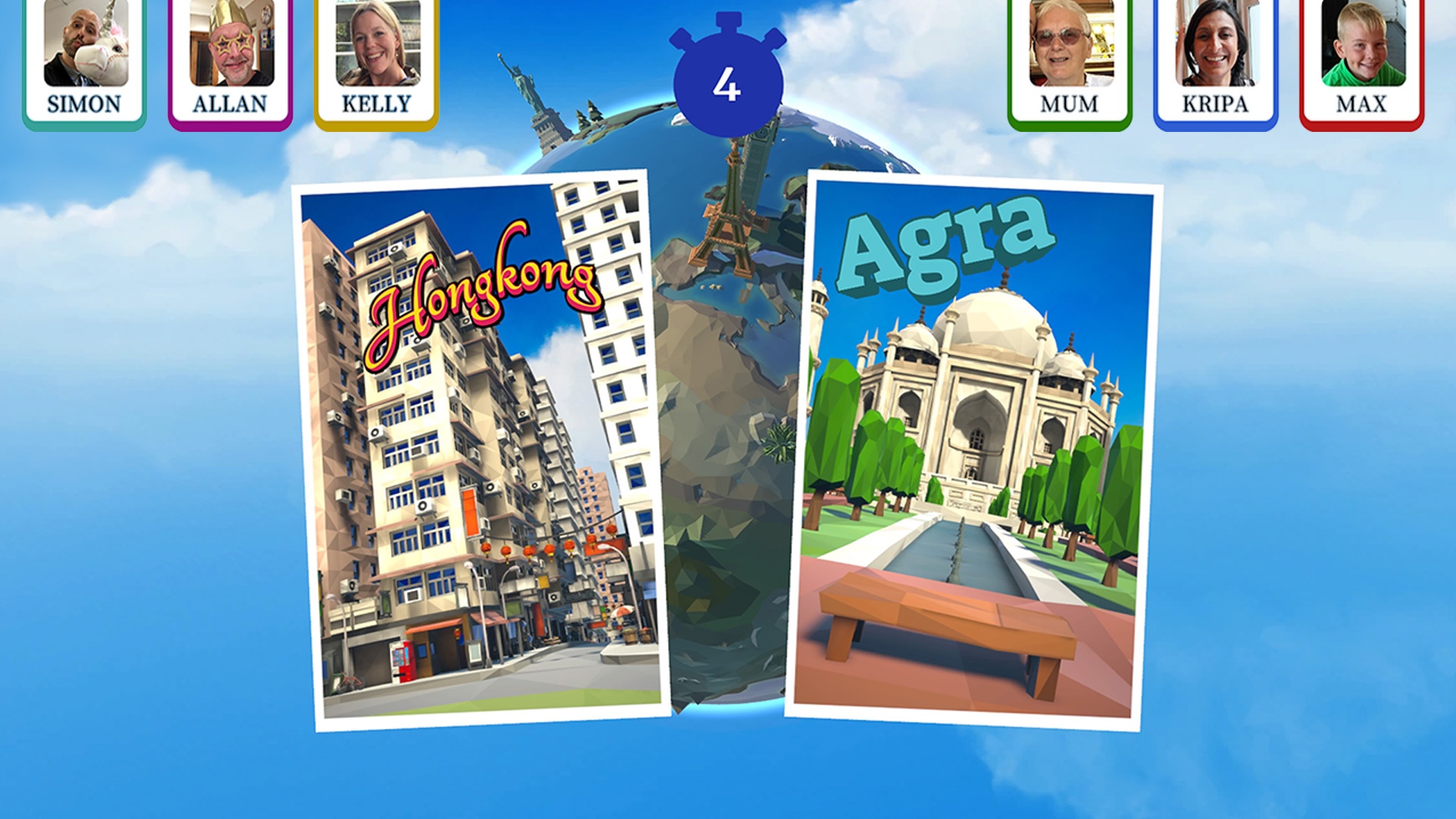 Each round begins with players choosing between two destinations. There are a total of 20 destinations in the game and it draws them randomly. You’ll want to choose ones that have a letter or letters you’re aiming for, but pros will also try to guess what letters their opponents need and steer clear of them. Once players vote on a destination, you all fly to the destination that received the most votes (split votes are chosen randomly). On the way you get to see your airplane fly by, zooming in on each player’s portrait looking out the window while showing however much of their secret word is revealed.

Arriving at the new location grants you not only a random word game but a little silly quip from Amy the Aviator, the game’s host. I found these a bit of cheesy fun but the youngest nephew, who loves to skip everything he can, would always yell at the screen for her to just let us play. Once her little joke or commentary is through you’ll be presented with one of the game’s 15 word games. These are all very short, ranging from a matter of seconds to a couple of minutes, and then the winner chooses their letters in secret or receives an upgrade card if there are no letters they can earn. This process repeats until one player has spelled their word and won the game!

Overall Wordhunters is a bit of a mixed bag. I love the phone app, and the quick-paced word games keep things moving along, but sometimes the game just drags on forever. We tried the game with three total groups: my gal and I, then the two of us and her 10-year-old nephew, then the three of us and her teenage niece. Because almost every one of the games requires spelling skills and neither of the kids are good with spelling (the niece has dyslexia and the nephew is so young), we crushed them every time and they really didn’t have much fun. Even though my gal won most of the rounds we played, games still often took 7-10 rounds simply because it would take forever for her to get a destination with the single letter she needed to win. Also, once only one letter is missing from someone’s word, it’s rather easy to guess at the small number of possible letters they may be after, and players can simply team up to vote against the city that has that letter in it. On the other hand, there were at least two times when she won the game in only two rounds!

Wordhunters alleviates some of this randomness with upgrade cards. Each player starts with one of each, and if you win in a city that has no letters you need you’ll get one of the upgrade cards you’re missing back at random. Two of these cards – Diversion (allows you to choose from two new cities in secret without anyone else voting) and Head Start (which gives you some sort of head start or leg up in a game) – are useful throughout the entire game, but the other isn’t. Extra Letter allows you to choose a third letter to use in your secret word if you win in that city, but once you have two letters collected the card becomes useless. Diversion is terrific for the end game in that one player can choose a new location, but even then sometimes neither of the choices has a letter the player needs. This sometimes led to a loop of myself or my gal (or both!) needing only one letter to win, winning a round but not getting the letter we need, getting a new diversion card, diverting somewhere, still not getting it, etc. It was very funny to see the nephew and niece look at us and ask which one of us diverted somewhere in the angriest way possible. Other times one of us would finally be heading somewhere that would allow us to possibly win the game only to find the other had diverted us somewhere else.

Luckily, the word games are all a lot of fun, and they’re different enough that the game never feels repetitive. Some words reward speed, others a big vocabulary, and some even reward those who can rearrange words or turn words into other words. I loved Once Removed, which tasks you with taking a large word and turning it into a small one a single letter at a time. For example, if you’re given the word RANGES, you can click on the S to turn it into RANGE. Clicking on the E would then turn it into RANG, and the N would turn it into RAG. You get a point each time you shrink a word, and you’re given a new word if you mess up. Letter Stack was an especially fun game too: you’re given a four-letter word and players take turns replacing a single letter to turn it into a new word. Each player has three lives, and if you run out of time or play a letter incorrectly you lose one, and the game continues until only one player remains. The only downside to this one is that the game allows you to replace a letter with the same letter, so if you the word is TILE and you have a T, you can just replace the T with another T and the game counts it as a valid move. 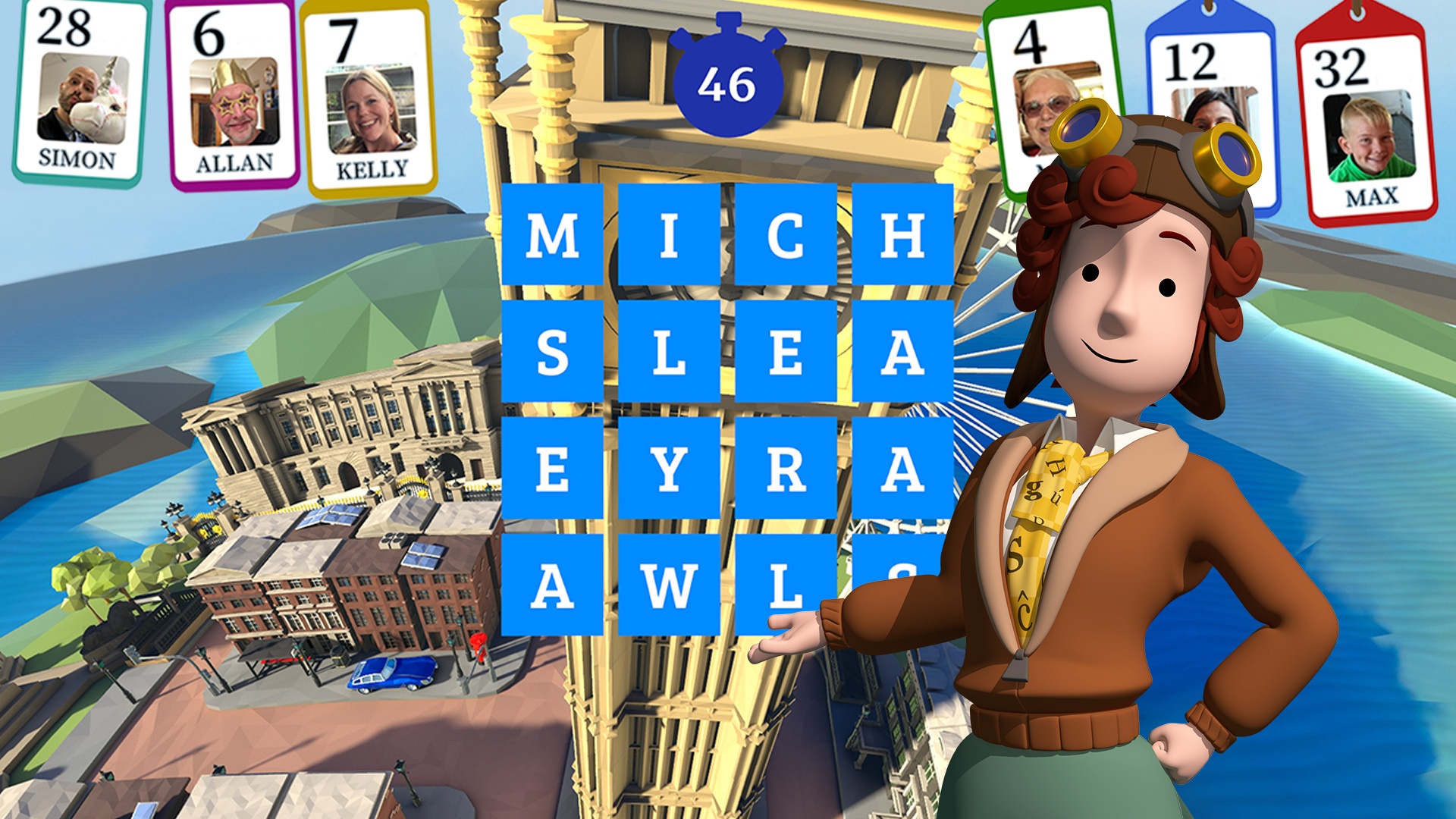 Other particularly fun games included a shared Word Hunt puzzle where players can circle any words they find, but only the first player to find it gets the points; Disemvoweled, which presents players with words without vowels in them, challenging you to drag vowels into the correct places; Find the Combination, where you have several letters around a padlock, rotating it to select a letter and pressing the center to see if that’s the next letter in the word or not; and one that presents all the players with a word and asks them if it’s real or fake. None of the games are bad by any means, and I liked that the variety meant that some games were my specialty, some were my gal’s, and most were neck and neck. This meant that even if the overall game took a long time due to not getting the letters we needed, at least we always had fun trying!

The one thing missing in Wordhunters is a variety of game modes. I would’ve loved one where players merely earned points for winning, or one in which players are merely given a gauntlet of word games in sequence without all the stuff in-between. Finally, a mode where players could vote on which word game they wanted to play instead of which location they were headed to would’ve been nice as it would increase the odds of playing preferred games. We really did enjoy the game, and I still plan on playing it a lot more with my gal. I hope we can even convince the other non-gaming adults here to give it a go. Being able to play on a phone instead of a controller is much more welcoming for video game newbies, but so far we’ve had no luck with winning them over. One player in particular was nervous about all the rules of the game, and since the game doesn’t allow you to pause it we can’t just sit and talk them through it easily. Still, it’s a great game for those who love word games!

As one last note, the Wordhunters app has a single player practice mode where you can take on two of the games: Anagram Solver and Find the Letters. Each of these has five difficulty levels, each of which is unlocked by getting at least one star in the previous difficulty. The games play exactly like the full game except that they’re altered for a solo high-score challenge, and it’s really awesome that anyone can play these free without even owning the full game!

A PlayLink title for 2-6 people with 15 different word games. Travel the virtual world, collect letters, and outplay your friends and family!