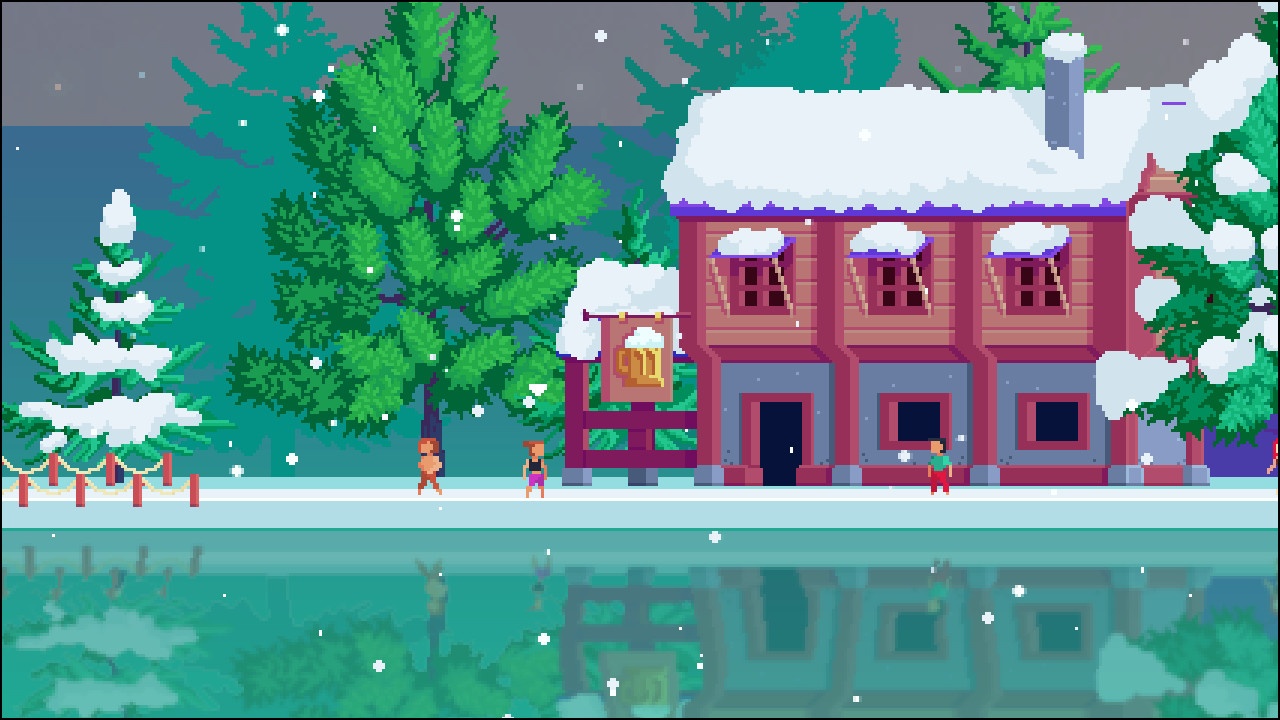 Don’t Sink! isn’t a fan of handholding. Apart from the short opening monologue, you and your shipmates are cast out and left to take on the high seas alone, but while initially daunting, once you spend a few hours with Don’t Sink! you realise there isn’t really that much to learn. It’s neither a compelling casual experience nor a deep strategy and failing to strike a balance is the games biggest pitfall.

Attempting to merge all aspects of pirating life, Don’t Sink! mixes mini naval warfare, selling booty and governing islands; all whilst keeping your crew fed and happy. There’s a healthy mixture of micro management and basic combat, and once you’ve moulded your perfect pirate you’re free to do as you wish. As well as a main series of quests, optional missions and delivery jobs are gained from the inhabitants of the many islands that make up the games archipelago. These quests earn you valuable gold which is used to buy ship repairs and goods for your shipmates, as well as buildings for any islands you govern as well as ship upgrades.

Once you’ve got some money behind you, an upgraded galley gives you opportunities to take islands that, once yours, can be used to build your empire. Governing islands requires you to keep your residence happy and safe and you can balance what’s important to you for each island, so whether you want to invest in island defences or focus on earning money from farming and mining its your call. It sounds like there’s a lot to do in Don’t Sink!, but whether you’re questing or managing your ship it all boils down to ‘go here, press this and repeat’ with very little payoff or sense of real purpose. 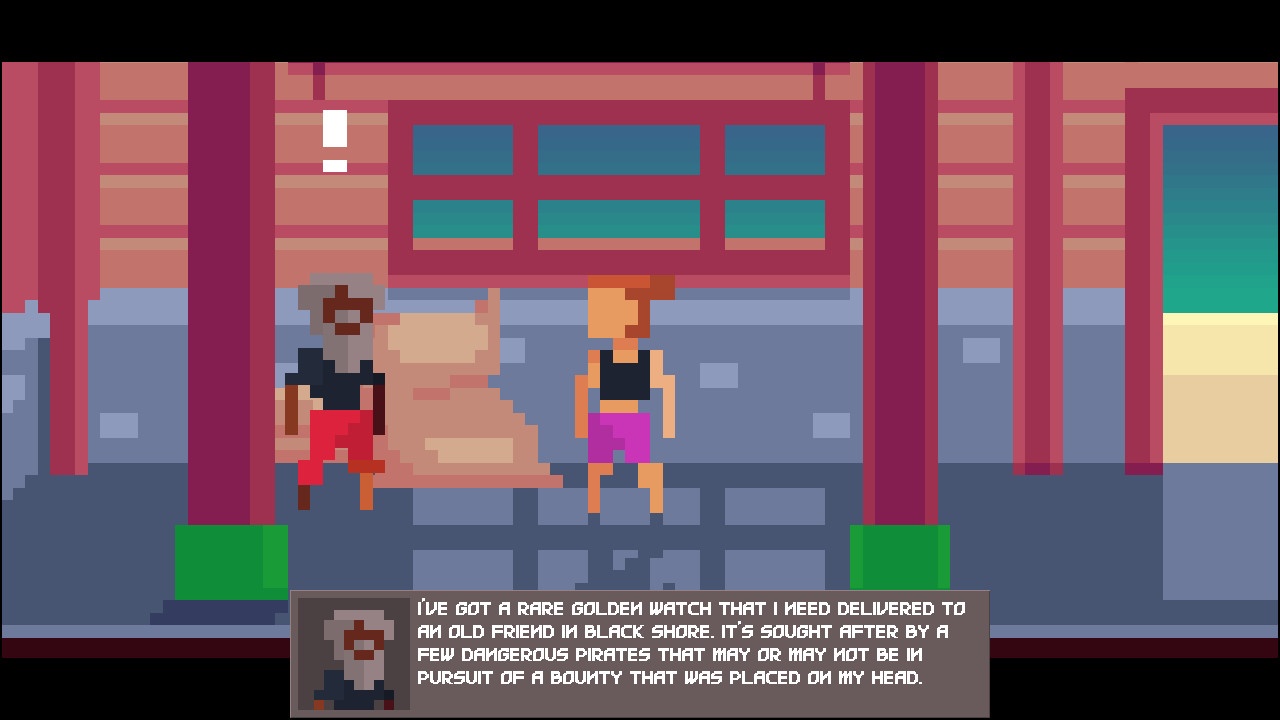 Traversing the map is much the same and bar the occasional random event, the only thing you need to do is make sure no one is hungry and that the ship is in good nick. Along the way you’ll often run into enemy ships and successfully taking these on reaps rewards such as gold and new crew members. There’s obviously a risk to your own ship, so it’s paramount not to bite off more than you can chew.

Naval combat is simple, choosing from attacking, repairing, retreating or boarding an enemy ship, however the latter option ends up being the most used because the chance of gaining victory in ship to ship combat is slight, unless you’ve earned enough gold to fully upgrade your boat. The AI rarely chooses anything but attack, so unless you release the first volley of cannons, nine times out of ten you’re sunk before you can deal the killing blow. You can buy alternative ammo, but unless you’re quick on the draw or downright lucky, you’re better off going straight to boarding to give yourself the best chance of victory.

But whilst more interactive than naval combat, boarding comes with its own frustrations. Swashbuckling against your enemy enters you into a button mashing mini game, but unfortunately it’s no more compelling than the rest of Don’t Sink!. You can swing your sword up, down, straight ahead or parry hits, but it all boils down to pot luck and even the toughest enemies are easily bested by hammering any of the attacks. 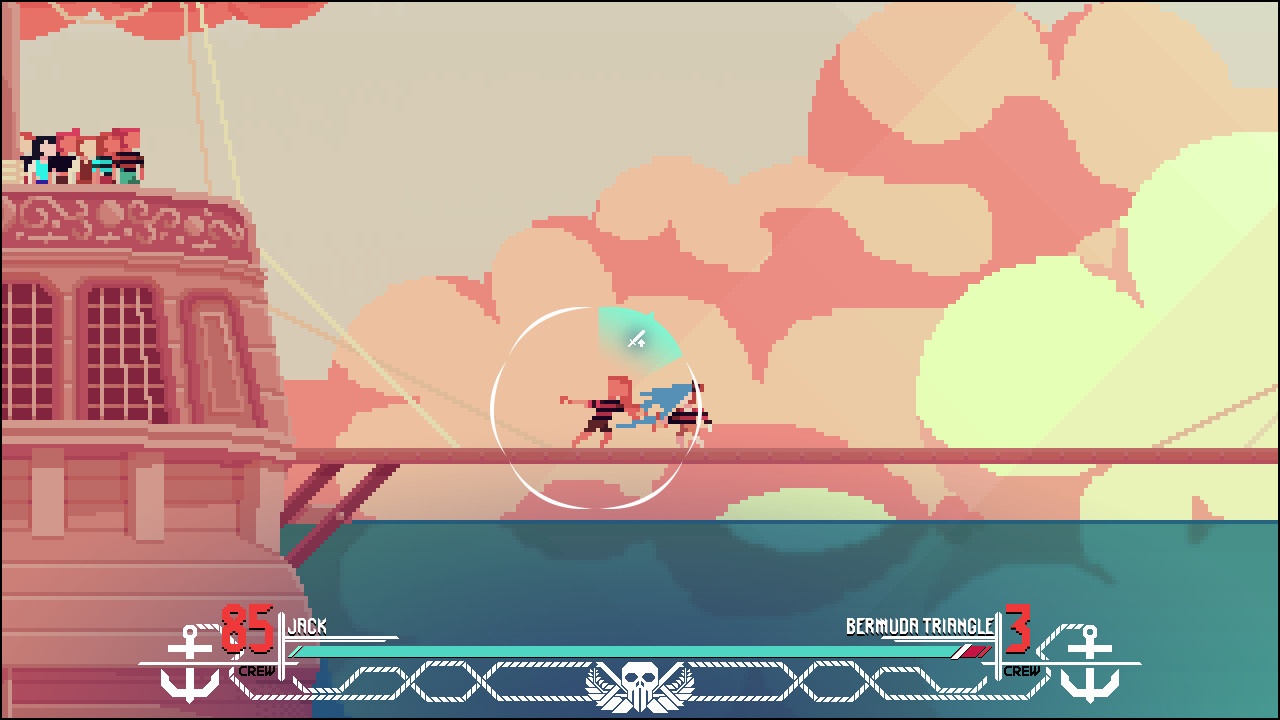 But it’s not all doom and gloom because while it doesn’t offer too much in terms of rewarding gameplay, it makes up for in earnest charm and charisma. While characters all look kinda the same (generic blobs of coloured pixels), environments are lush and gorgeous with some variation across the map, from jungles to snowy far off isles. Sailing the seas between destinations and watching dolphins keep up to pace with your boat while your men busy around your ship is definitely a highlight and brings me back to that first time in Black Flag where you’re greeted by a whale soaring into the air, albeit on a much smaller scale.

And that’s really my main issue with Don’t Sink!, it fulfils its own personal quota but doesn’t plunge enough into any of its aspects enough. I could forgive the haphazard combat if the management was anywhere near deep enough to make it the main draw of the game but while all parts are moving, none of them are giving their all. Attacking islands should have you facing waves of boats and pirates to prove your worth. Quests should see you hunting down whales to harpoon for goods and taking down troublesome enemies should need more than a mere click of a button to repel. It’s all fine, but that’s all it really is; just fine.

Don’t Sink! doesn’t stink, but it isn’t the pirating adventure that you’re hoping for. Rather than an adventure of high seas hi-jinks, you’re treated to a bite sized journey that can’t really nail any of its aspects. There are tiny shreds of enjoyment that pop up in rare intervals and the micro management is adequate, but while it tantalises it never manages to satisfy.

Don’t Sink! doesn’t stink, but it isn’t the pirating adventure that you’re hoping for. Rather than an adventure of high seas hi-jinks, you’re treated to a bite sized journey that can’t really nail any of its aspects.