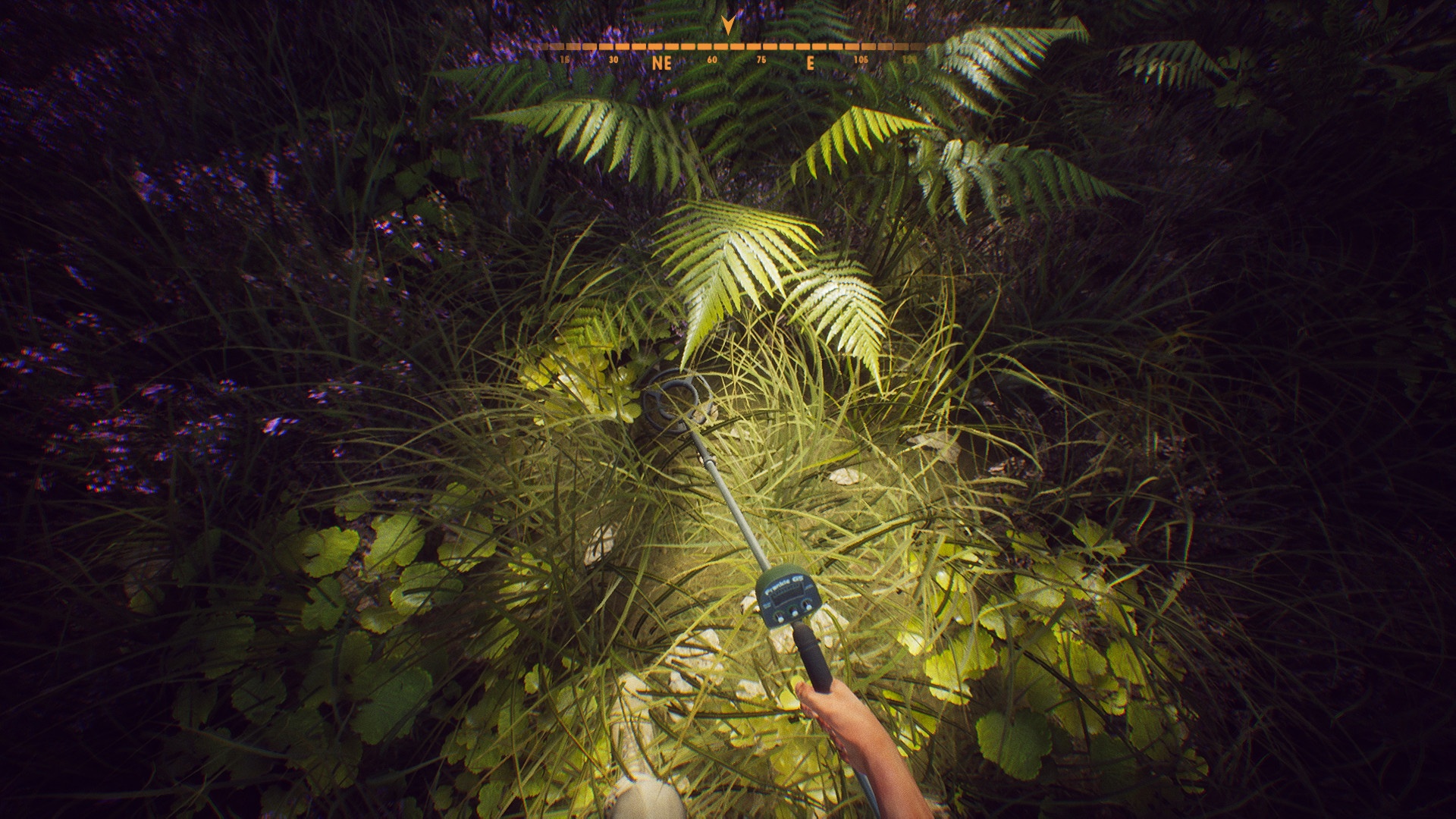 I love simulators. I love exploration in video games. This should be a perfect match, right? No. Unfortunately, Treasure Hunter Simulator repeats its game of hot-and-cold digging again and again. It’s less exploration than exploration and return, ad nauseum. You play a male character. His uncle died, and in order to receive his inheritance, he must follow instructions from Johann Schmidt, the uncle’s representative. There is no plot to speak of, no character change. You go to prescribed sites and dig for items.

The game starts in story mode. An exploration mode is listed, but I have yet to experience it, even after unlocking the “Finish Line” achievement. Many players, myself included, can be tempted to skip the tutorial. Don’t. In this case, you will dig up a legendary item that you will need to increase your prestige and unlock new metal detectors. Before you travel anywhere else, check your email.

You need to accept jobs. If you go digging around in the Bavarian Lake without accepting jobs (like I did), then it counts toward nothing. Each new location will need to be traveled to at least three times. The third time, if you completed all the previous jobs and side quests, unlocks the legendary treasure and permits it to be dug up.

My graphics card is a Radeon 7970 that barely meets the minimum requirements. Even so, the graphics are lovely. Dappled light changes in forest environments. The wind moves flora in believable ways. Sand blows in desert environments. The water behaves the way water ought to, even seeping up at waterside digs. The terrain dug into changes with each location. There were some issues with floating stones on the Scottish coast and being able to see through the world when searching for the hidden beach. 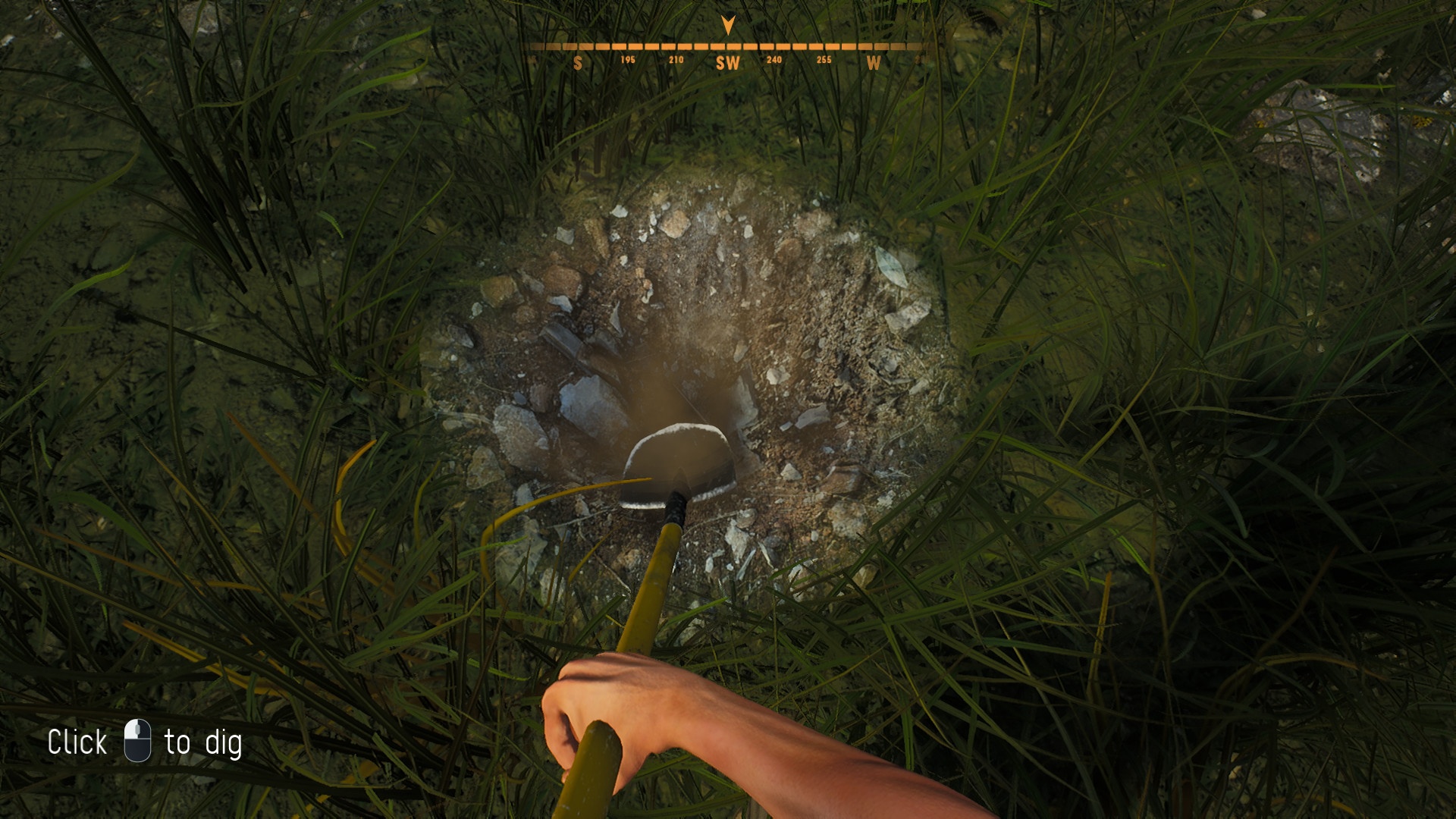 Instrumental music and environmental sounds such as birds, insects, and wild beasts make the game feel immersive. At times it seemed as if I should be putting on sunblock or using bandages on all those blisters from digging. The rat-a-tat-tat of the detector getting closer could become a nuisance, except it is essential for game play. Locating items is much harder without sound.

There are some small issues with the keys used and playability. I immediately changed the detector sweeping motion keys from “q” and “e” to “r” and “f.” After starting a new game, I realized that you need to be in the main menu to change keys and not in the office. The sweeping function has been updated and is now tied to the mouse, but you can still use the keys. I tried to change the run button from left shift to the space bar, but it didn’t take. Occasionally I found myself right clicking instead of left clicking after I’d located a treasure, only to have to enter detection mode again. If you get the “can’t dig from here” message, then often the avatar needs to be moved uphill. Digging downhill nearly always fixed that issue; however, there was an instance in Slovakian Valley where the avatar tried digging at least ten times in a circle around the object and was unable to do so, and two instances in the Forgotten Isle where the detector icon never completely filled.

Unlike Microsoft Treasure Hunter, the avatar does not die in this simulator. At most, the avatar can get stuck. There is a menu option, “unstuck,” that takes you to the start of the location’s map. While Roblox’s Bee Swarm Simulator takes artistic license, Treasure Hunter Simulator seems to be attempting realism. There are two main places where it departs from realism. Firstly, where the game mechanics force you to take terrible pictures in order to complete quests. A picture cannot be taken to fulfill the quest requirements unless you are lined up with the photo icon in the game and have a white circle in the middle of the camera lens. In Oman Oasis, one of those pictures basically pointed at the ground. It was not a shot any person calling themselves a photographer would have ever taken, but it fulfilled the quest requirements. These pictures are supposedly in the name of revamping websites, but if so, why are they already in full color? It would make more sense if the pictures were black-and-white or sketches. Secondly, where you are required to run races to “discover” the fastest route on a map. It would have made more sense to say that the nephew was required to put on a fitness tracker and do sprints or other timed races, because otherwise he would be ineligible for the inheritance. The story line is thin.

Treasure Hunter Simulator could be played in one’s sleep. A player requires patience and persistence, but will be able to achieve the requirements without difficulty. I say this as a player who can have trouble with the timing of difficult actions. I never had to run any of the races more than a few times to achieve the side jobs. The only item of consequence is making certain you earn enough money on your digs to be able to travel to the next location after buying your newest metal detector. 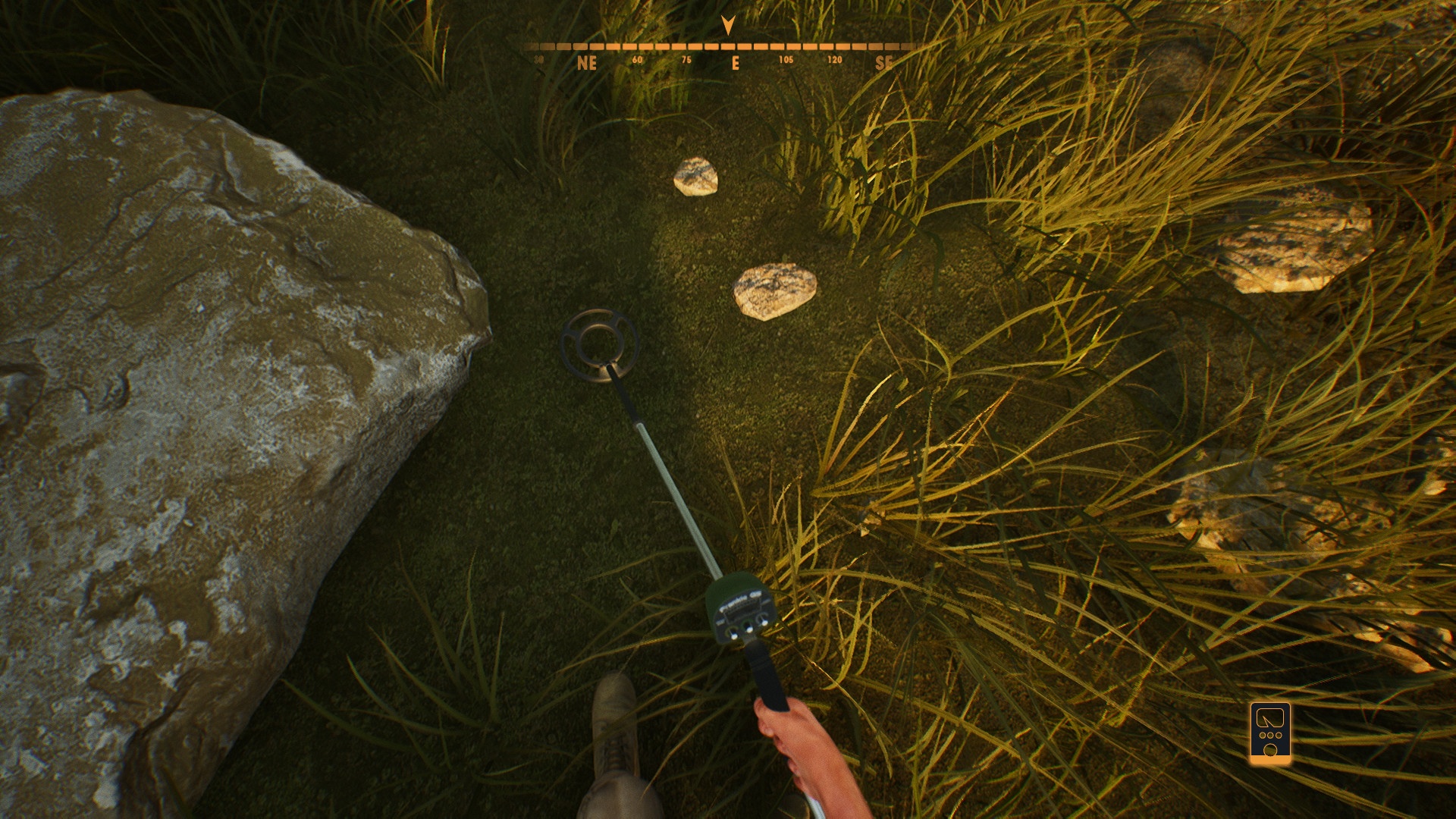 Is it replayable? Maybe. I found myself playing it again to see if I could manage it faster this time and to try to unlock exploration mode. After emailing the developer, the only conclusion I have is that I did a task out of order in the first play through of the game and the game couldn’t process it as complete for unlocking exploration mode. I expected to see rewards progress faster after I unlocked the last digital detector. I spent over 34.5 in-game hours from that point to achieving the “Finish Line” for a total of 54.5 hours played.

One of the nicer surprises is that this game sells the trash items for you. The items you dig up are always the same until you unlock the digital detectors. At that point, I started seeing cannonballs, padlocks, razor blades, knives, spurs, and shovel blades. I dug up at least three Brodie Helmets, when they are supposed to be exceptionally rare. The common treasure items are marked as rare, which I find disingenuous. The initial loot that is common is the trash: bottle tops, pull tabs from soda cans, metal fasteners, carabiners, and nails. Better be sure to get that tetanus shot before adventuring. Each item must be identified. I think a better descriptor would be identify and evaluate. Toward the end, I could identify what was coming out of the ground. The only question was its quality: good, poor (ruined), or tolerable (destroyed). Each item requires at least three shovels of terrain and that never changes. When digital detectors are unlocked, a mid-depth item requires four shovels and a deep item can require as many as five shovels. Also, the orange and white for the digital detector icons and the “Can’t Dig Here” message are difficult to see in Jordan’s Lost City.

The spelling and grammar are atrocious. The icons for the digital detector read as “deepth” [sic]. Homonyms—such as where and were—abound. There was also an instance of losing versus loosing and the game writer having used the incorrect word.

If you can manage to stay awake long enough to keep playing this game, you might enjoy it. As much as I want to complete everything and unlock the exploratory mode, at one point I was not sure I would play any more of this game. The dig loses its excitement quickly. I believe in the quest for realism that the game makers purposefully teach gamers that treasure hunting (archaeology) is boring. The odds of finding actual treasure are long. It must be a profession that requires persistence.

Treasure Hunter Simulator could be played in one’s sleep. A player requires patience and persistence, but will be able to achieve the requirements without difficulty.