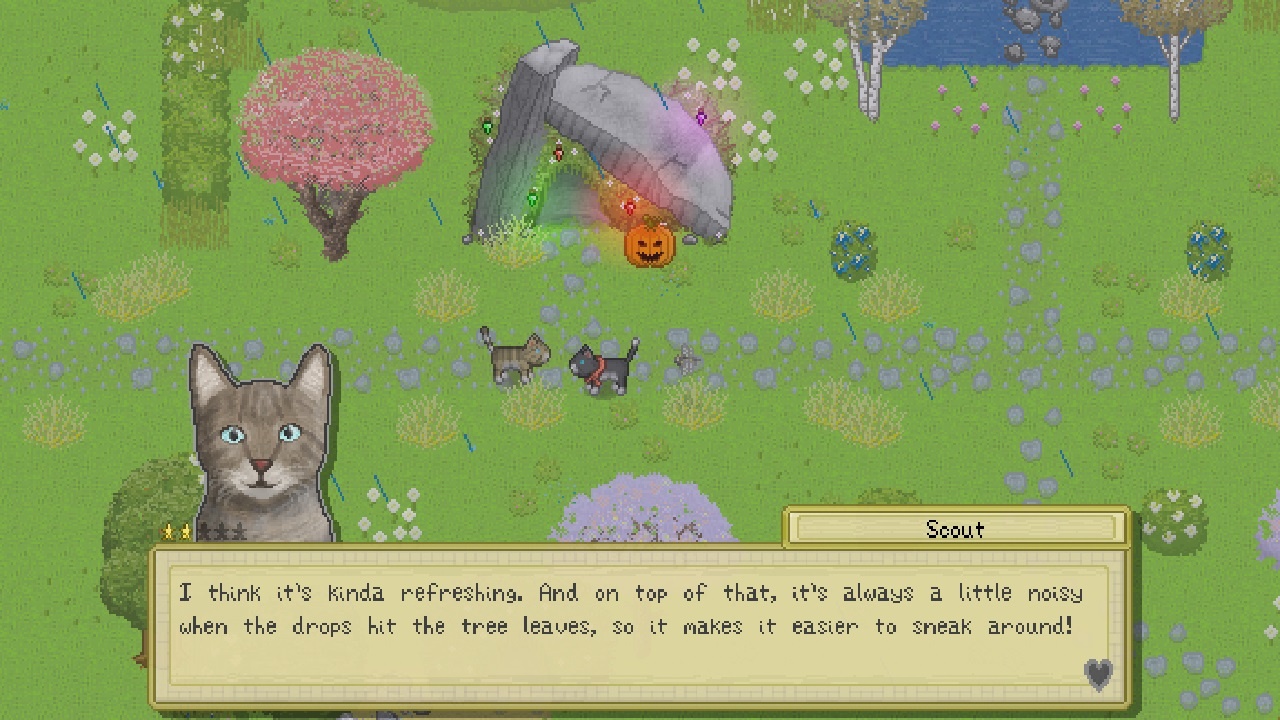 When I’m not waffling on about video games, I spend the daylight hours trying to manage a pet store, so I like to think I know a thing or two about cats. To be fair, part of the reason I was excited to try Cattails was because the tagline is ‘Become a Cat’ and I can definitely use that first person experience to earn some money. Unfortunately if Cattails is anything to go by, my customers cats spend a majority of their alone time being mercilessly beaten by strays and wondering around aimlessly before dying of starvation.

There’s a very loose story keeping Cattails together and you’re otherwise free to do as you wish. As a stray you’re taken in by a group of abandoned kitties who offer you sanctuary away from the perils of the outside world. There’s other tribes of cats that you have to build rapport with by doing basic quests and jobs, all whilst managing your hunger. Basic hunting and foraging mechanics are easy enough to utilise but occasionally, hunting can be frustrating as it’s a pretty inaccurate system. Sneaking up behind animals is easy but even if you time it properly, you often miss when pouncing and it can be the difference between life and death if you don’t keep an eye on your health. 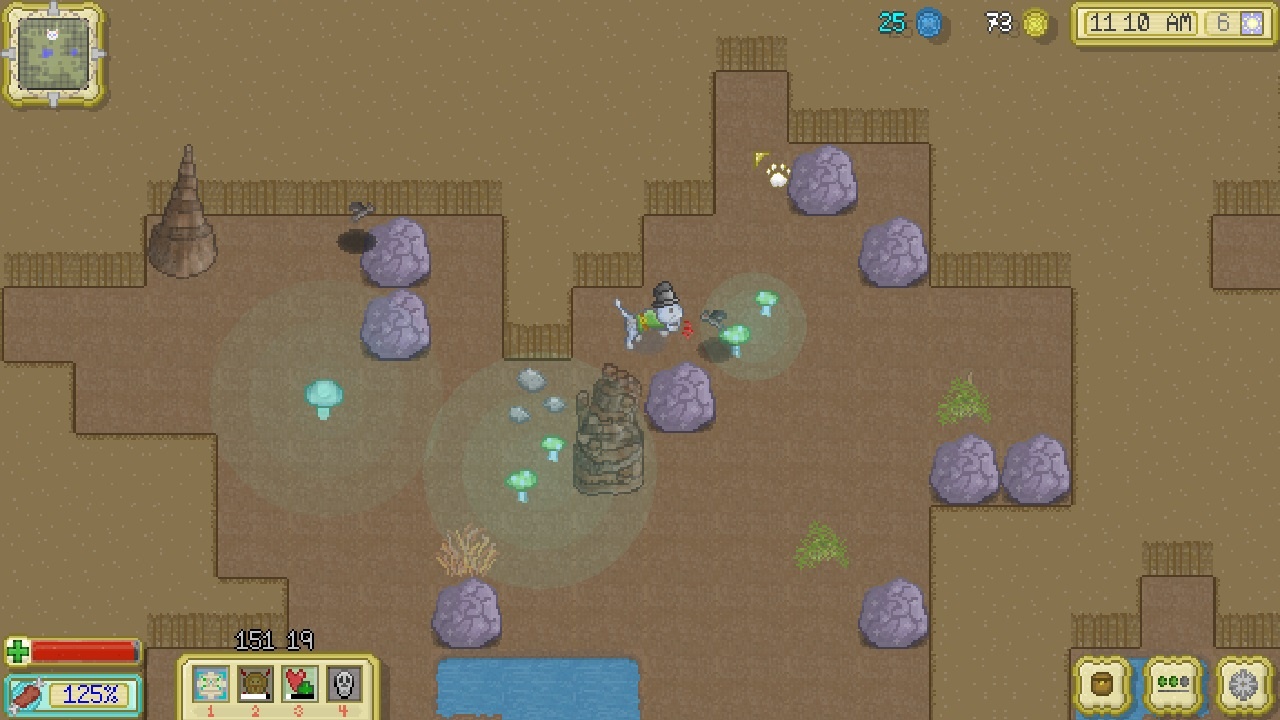 A mix of simulation and RPG elements keep the game flowing and earning XP and money allows you to unlock perks and cosmetic changes to your cat as well as to your den. There’s also a nice mechanic late-game that opens up romance options and just like the rest of the game it’s absolutely adorable.

While you can chill with your cat pals in your sanctuary you’re absolutely screwed if you come head to head with other felines in the wilderness – they’re all just so angry. Literally every one of them will happily start on you if you as much as share the shame patch of grass as them, thus beginning some of the most frustrating combat I’ve ever experienced. You can swipe or you can run, only the controls are so clunky that by the time you’ve turned to escape you’re busy being battered by the antagonizing cat. Levelling up and unlocking perks helps, but by the point you’ve managed to make yourself a semi decent combatant you’ll have just whacked the difficulty down to very easy just to give yourself a chance.

Turf wars are definitely a thing in Cattails and they’re as nonsense as you can imagine. Picture this, you’ve just recovered from taking a beating by a random stray called Pickles and you’ve managed to wonder into another ten equally angry cats squaring up to each other. But that’s if you’re lucky, occasionally you’re all alone against this mob and you’ll have no chance but to run. It’s just strange for a game so keen to be a whimsical cat sim to have such difficult combat mechanics that it takes the shine off such a cutesy experience. 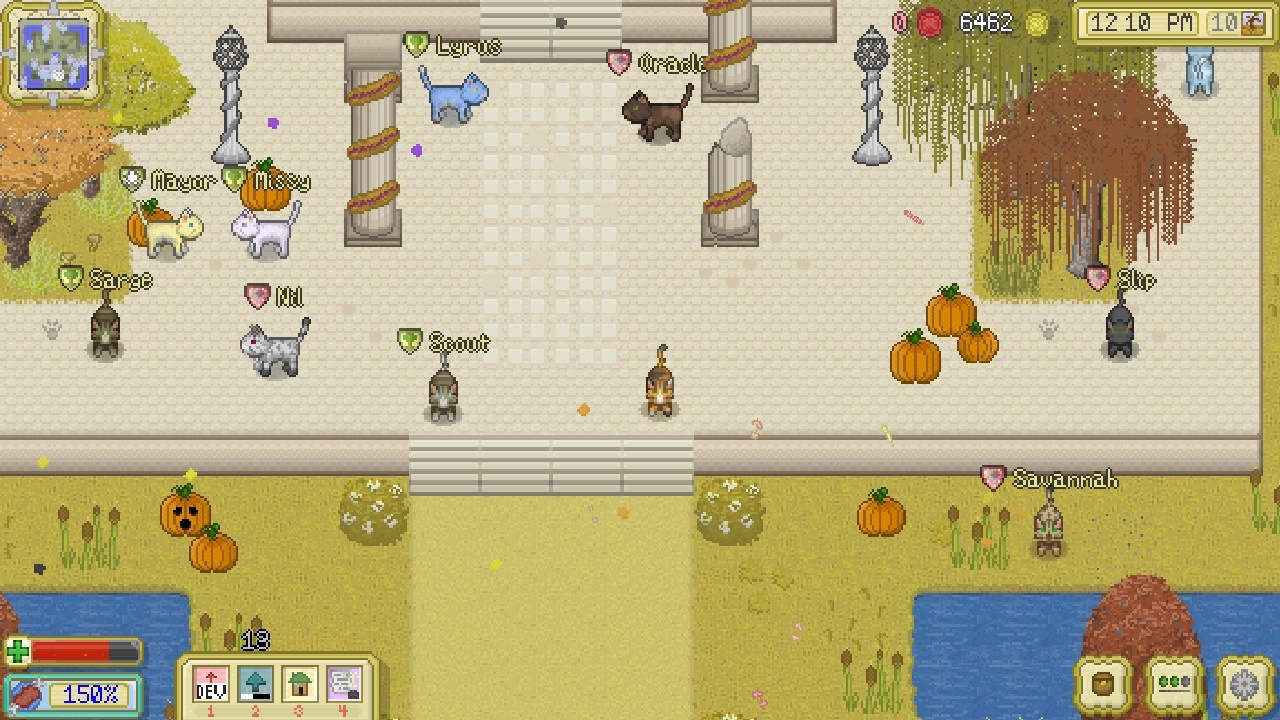 But while it may not make waves like other games of a similar ilk there’s a charm about these little pixelated cats. Granted, the environments look like they’re straight from an RPG maker but there’s a personal touch to the cat designs that makes it hard to be angry at, even when the games shortcomings are glaringly obvious.

Want a decent animal combat game? Dust off the PS3 and play Tokyo Jungle. After a whimsical life sim? Animal Crossing, Stardew Valley, Fantasy Life, Harvest Moon (even the modern rubbish ones) – take your pick. Unless you’re absolutely obsessed with cats then I don’t really see the point in spending any longer than an hour or two with this, and while it’s cute and has some redeeming qualities there’s no way you’ll want to redeem all nine lives in Cattails.

Unless you’re absolutely obsessed with cats then I don’t really see the point in spending any longer than an hour or two with this, and while it’s cute and has some redeeming qualities there’s no way you’ll want to redeem all nine lives in Cattails.