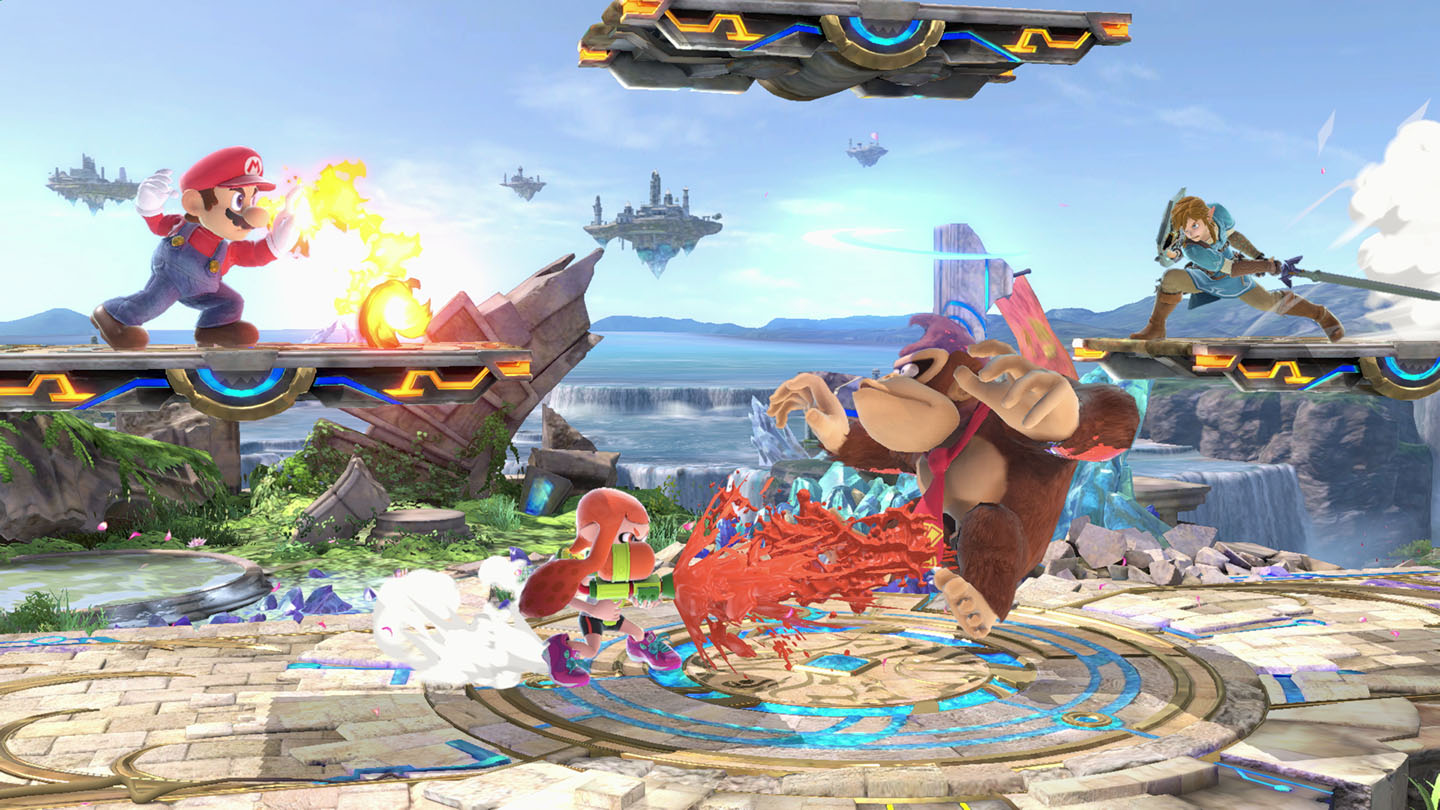 Doing video game reviews is still sometimes surreal to me. Growing up, there were a ton of games that I loved to play, and I adored them the way that people adore musicians, actors and artists. Nintendo, as some of you may have noticed, is my mainstay, my wheelhouse, and that’s due, in large part, to the number of games that I played as a child (and my parents adamant refusal to get me multiple systems from the same generation, but that was totally understandable). So when a title from Nintendo comes into my possession and I’m told “Review this game, point out the strengths and weaknesses, break it down,” it’s almost like being told to critique a movie starring your childhood hero, or interviewing a celebrity that I respected and admired when I was in school. Super Smash Bros. was such a game changer for me when it came out on the N64: until that time, everyone used to tell me that Nintendo games were more childish, and, despite the SNES version of Mortal Kombat II being superior to the Genesis port, we never really saw a great fighting game premiere on Nintendo’s own turf. But Smash changed it all, giving players an opportunity to actually take their favorite icons and mascots and pit them against one another. Melee was pretty much my entire college life, as myself and dormmates put in countless hours to unlock all the characters available. So to now be here, in the presence of Super Smash Bros. Ultimate, and being asked to review it…well, it’s daunting. Not impossible, but certainly daunting.

First and foremost, the game is like a buffet packed into a single meal. If you aren’t aware, and that’s alright, Super Smash Bros. Ultimate is a fighting game, an arena style game where you and up to seven other people (that’s eight goddamn fighters) attempt to be the very best in either stock lives, timed matches or straight up, single death combat. Smash Bros uses the biggest and best names that Nintendo has to offer in character selection, ranging from Mario and Bowser all the way to Bayonetta, Little Mac and even Marth. In the last two iterations of the game (for the Wii, WiiU and 3DS, respectively), we’ve opened up the stables to bring in characters created by other franchises, allowing players to actually have Sonic the Hedgehog square off against Mario in a fight instead of a strange Olympic parody. The total number of characters for Ultimate is a staggering 68, not including some new characters who’ll be introduced as DLC in the future. If you had told me, as a high school student, that someday I could make Cloud from Final Fantasy VII fight against the Dog from Duck Hunt while my friend is Ridley from Metroid, I would assume you had totally misunderstood the directions on your Robitussin and we needed to find a nurse immediately. But no, that’s an actual match that I had just yesterday, and it was glorious.

Ultimate has really stepped up their single player mode, which is something that I sorely missed in the WiiU/3DS version. While some people poo-pooed the Brawl single player, it was a large scale adventure that was seriously fun and great for people who can’t always track down friends or go online. With Ultimate, you get the World of Light, a huge map in which you need to unlock “Spirits” to free other fighters and fight back against an army of Master Hands which have taken over the whole damn world. It’s a long, slow, arduous way to unlock characters, and it’s not recommended if you’re looking to merely get more fighters in your roster. Instead, it’s a really cool mode that could have been released as its own game, creating a new system of balances and checks that needs to be investigated on the regular. The different spirits you find add attributes to your fighter, like better melee damage, immunity to certain environmental hazards, or starting with an item equipped. The spirits themselves also have a sort of rock-paper-scissor balance to them, meaning that you can’t just rely on the one spirit in order to brute force your way through the whole event. Oh, and you’ll need to get more characters unlocked as well: I don’t care how well you main with Kirby (the only character available from the start), the other characters are needed to free up certain spots on the map for progression. If you’re looking to do the whole kit and kaboodle, you’ll need to get better as Snake, Marth, Pit and the others that I honestly suck at. 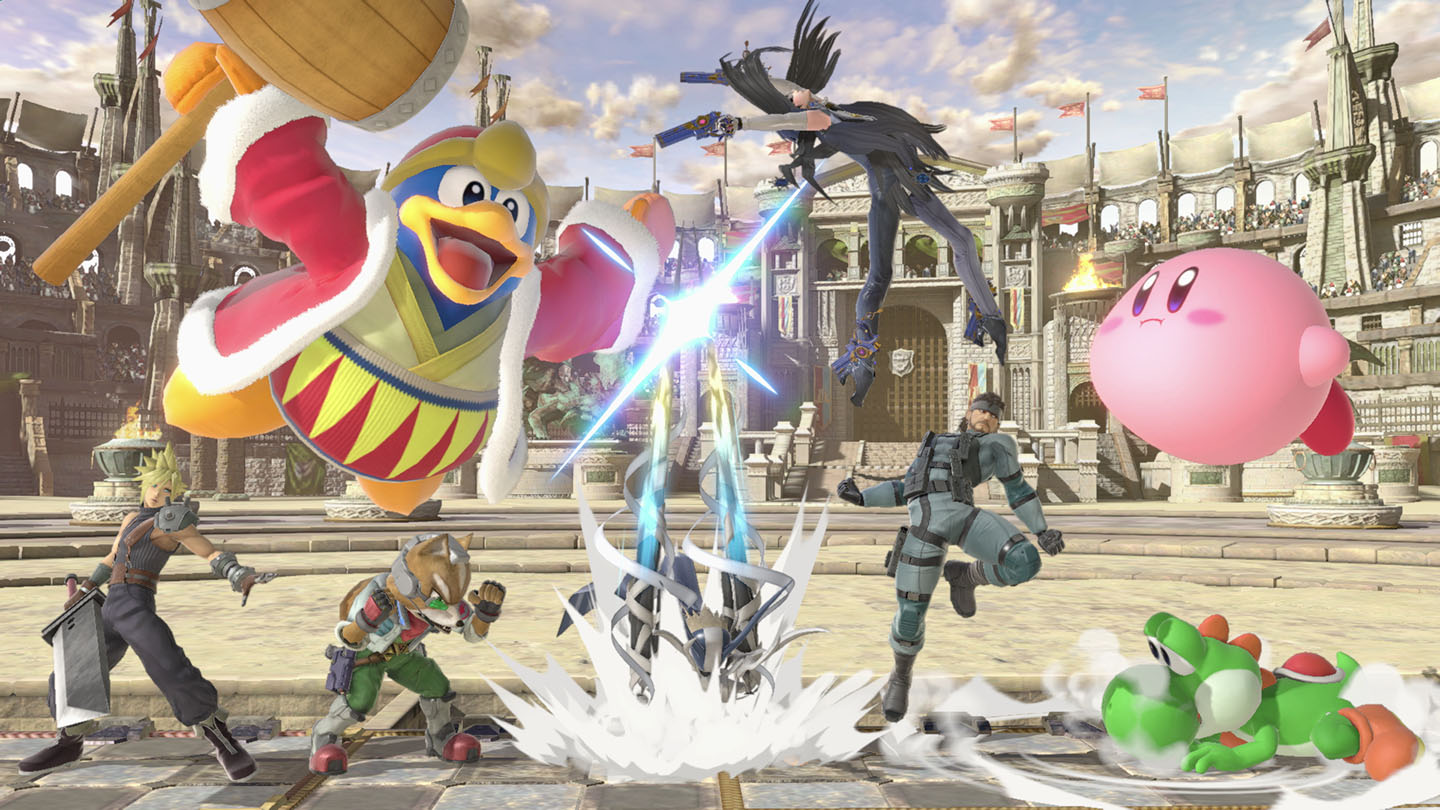 As a digital only player, you should know that Super Smash Bros. Ultimate is a massive undertaking. Bigger than Splatoon 2 with Octopass, far bigger than Mario Odyssey. Ultimate clocks in at a 14 GB download, and this is coming from Nintendo, who have mastered optimization and careful space allotment for their games. You’ll need to buy a new card if you’re not flexing at least a 128GB, and even then I would be wary of what you’ve already gotten on your system at the current. This is a hard sell in digital form because you will be coming around to play this regularly: not only is the fighting addictive and the modes wonderful, but the Spirits available in a separate mode change during regular campaigns, and you’ll want to collect them all, because why the hell not. I got a special Eevee spirit because I had played Let’s Go! Eevee, and I’m hoping we see more save game triggered special spirits in the future. But the game is going to keep expanding, with the DLC promising at least five more characters (the first of which, Joker from Persona 5, has already been confirmed). Make sure you keep a clean house on your card, because you’re going to need it.

The biggest complaint that I’ve heard echoed in the community (let’s face it, the game’s been out for over a month, there was bound to be some braying) is the online matchmaking element. Nintendo is working harder and harder to get their games up to proper standards with eSports competition in mind, and they acknowledge there’s still room for improvement. I feel bad for professional Smash players, I really do. This sort of competitive edge and serious player base has been in existence for almost two decades, with the game constantly evolving and people doing their best to evolve with the software. To not have a proper ranking system or be able to match up with other competitive players in a sort of proper display must be frustrating. However, as someone who is distinctly casual and just likes to have fun with online fights, the game couldn’t be better for me. I’m already a paying member of Nintendo Online, so whatever there. I’m able to fall into a match within seconds, and haven’t had any problems, day or night, finding other people to beat the hell out of me, because, let’s be honest, I’m terrible. But they’re always there. Around the globe and even just around my neighborhood, finding people to play against is far from the biggest issue. My internet sucking out is a far greater concern, and I’m worried I’ll throw up a flag and get banned if I keep dropping because someone one floor down decides to torrent a movie and my ping drops to the ground. I digress.

Honestly, my favorite part is the return of Classic Mode, which mimics the old school single player campaign from the earlier games, only Ultimate does it with a beautiful twist. Every single Classic Mode is tailored and catered to the characters running through it. Mario has to face off against a Giga Bowser who is truly fearsome. Link ends up facing off against Ganon (not Ganondorf), which unfairly means I gotta hit him from the back. Even Simon Belmont, the iconic hero of Castlevania, must do his duty and slay Dracula for the grand finale. The Classic Mode adjusts how it interprets things as well: for example, Pikachu fights almost exclusively against other Pokemon during the campaign, and Ryu is more focused on getting down hit points instead of getting a damage percentage up. These are by no means small details, and they exist for every single character entering into the Classic Mode. 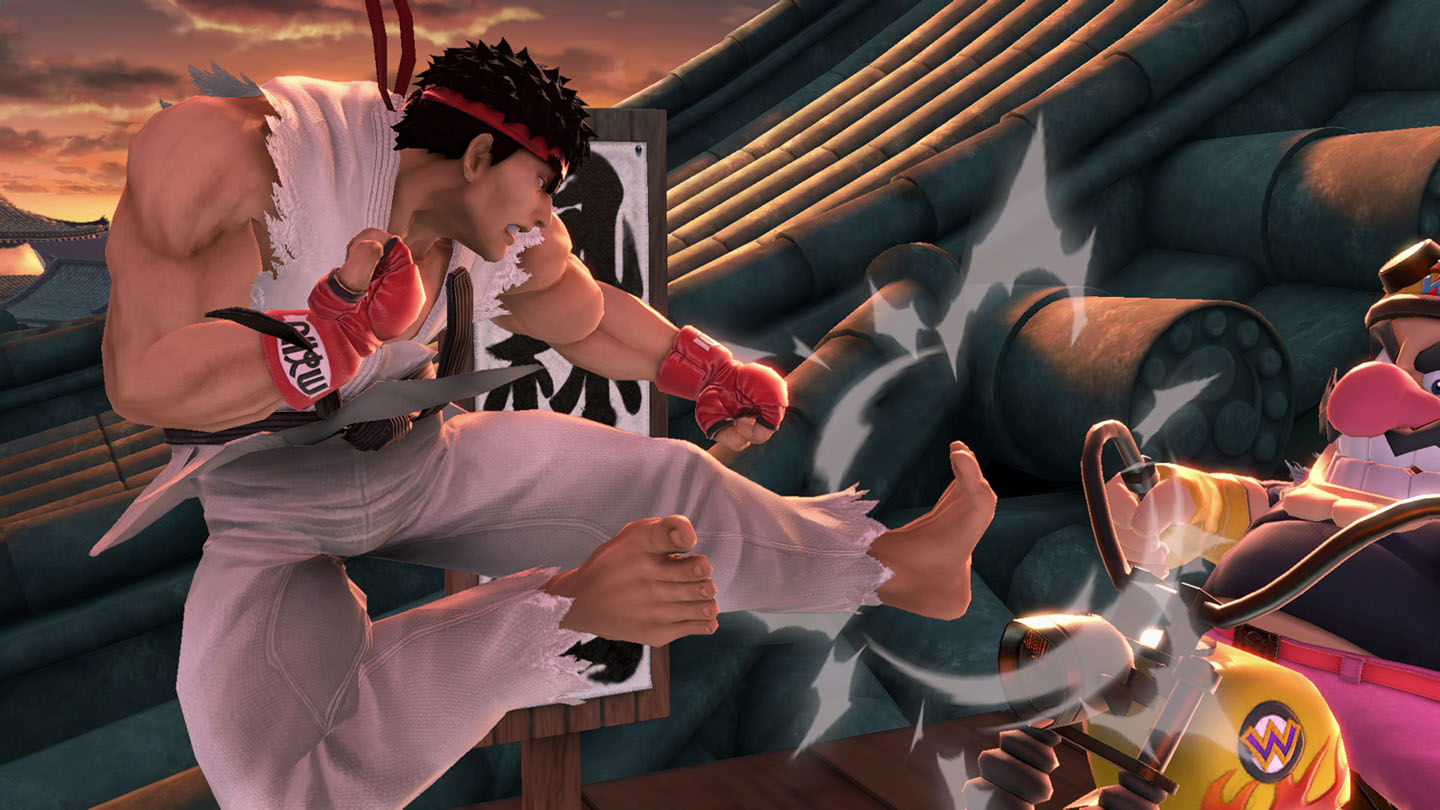 That’s the massive takeaway from Super Smash Bros. Ultimate. I don’t know if this is the final title in the series (how the hell could it be?), but there isn’t a single pixel or line of code that doesn’t feel absolutely finessed with love and care. The taunts all feel like they belong to each character. The input response on dashing, blocking, grabbing, deflecting, every single movement feels like it was tested and tested again through AI until it was perfect. The massive number of achievements to unlock are segmented into the different play modes, meaning some things won’t be unlocked until you do your time in the World of Light, Classic Mode, multiman melee, online battles and everywhere else. The gallery is just a jaw dropping display of all the information and trophies that the game represents, complete with a soundscape that you can listen to anywhere with your screen off. I’ve got my Genki Bluetooth adapter, and the promise was real: I can use my Switch as a Smash jukebox if I’m so inclined. This isn’t just a game, it’s an interactive museum that lovingly captures all the moments of Smash throughout the years as well as gives a bit in terms of each and every assist, Spirit and fighter that appears in the game. You can’t dive in there without learning something new or interesting, or at least relearning something you’d forgotten.

What is a great game? A great game asks very little of the player and delivers them a ton. A great game entices you to come back time after time without setting demands, limits or conditionals. A great game becomes an experience that you can share with your friends, your family, your children and your spouse and they can see the enthusiasm and excitement when you talk about it. A great game is something where you can hum the title song while you’re out grocery shopping, and kids and adults alike will snap their heads in your direction because they know exactly what you’ve been doing for the last three days. I made sure that I had the right controller and plenty of time, and it made my whole weekend blur by. Super Smash Bros. Ultimate is a great game. It’s got an easy to understand entry point for first time and more casual players, and it never has to go any higher than you want it to. The online community will pound you to pulp, but it can be done with smiles on everyone’s faces. There’s a reason that Ultimate is the best selling game of 2018. Because it was, easily, the best game of 2018.

Super Smash Bros. Ultimate is a great game. It’s got an easy to understand entry point for first time and more casual players, and it never has to go any higher than you want it to.