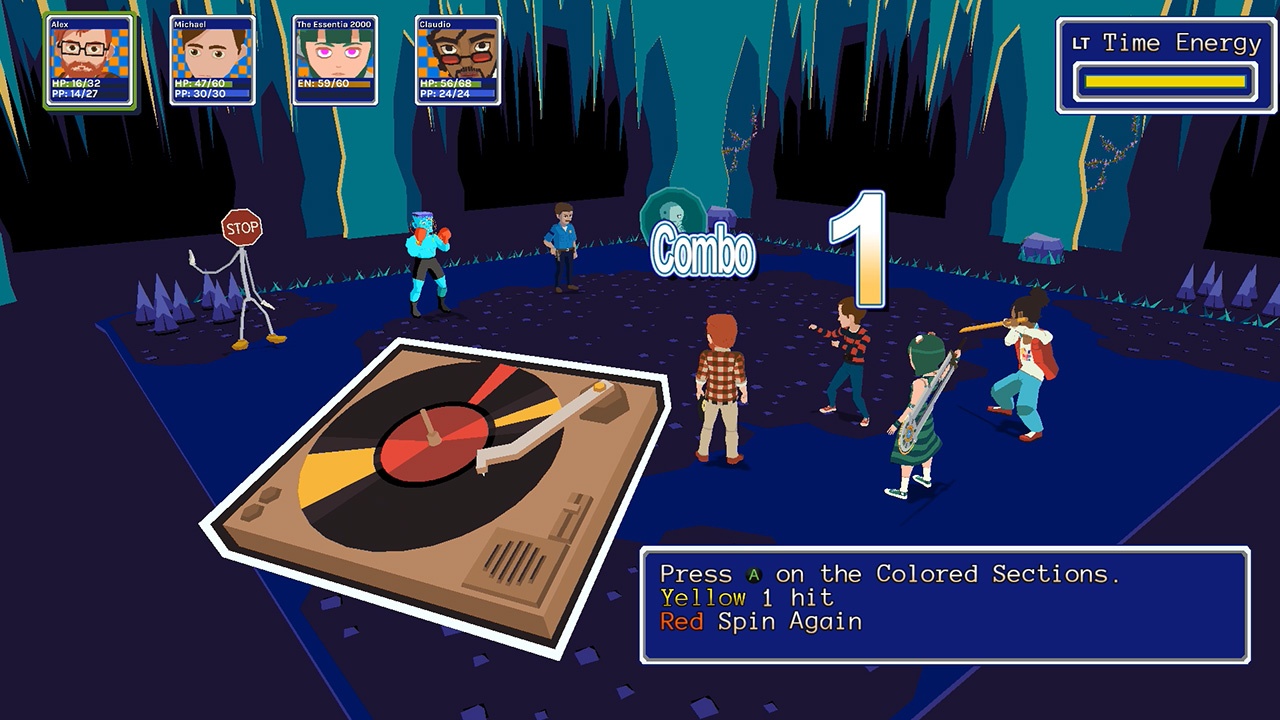 Video games often leave us with lingering emotions and feelings long after we’ve played them. The scope and scale of Final Fantasy VI still resonates with me years later, as I remember the different choices I made and the strong bonds that I developed with some of the characters. The horror of revelation that came with Layers of Fear aren’t as fresh as they used to be, but it’s still one of the better atmospheric games that I’ve played, particularly on the Switch. I’m certain that Ackk Studios wanted to leave something with the players of their ambitious game, YIIK: A Postmodern RPG. However, I highly doubt they were expecting that feeling to be utter annoyance.

You’re a dude named Alex who is returning to his home after a stint in college in the year 1999, which, by the way, is going to hammer itself over and over again to remind you that this is set in the end of the 90s. Alex is just cruising around when he finds a cat with a moustache, which steals a seriously inconsequential piece of paper from him and runs off to an abandoned factory, which is also a hotel. You go there to get the piece of paper back, find a bunch of incredibly trippy and weird stuff, and then meet a girl named Semi, who prefers you to call her Sammy. You have exactly five minutes of snarky and really abrasive conversation with her before she’s abducted by some kind of weird alien lifeforms and disappears. Since you knew this girl for less than the time it takes to load most YouTube ads, you make it your mission to rescue her, particularly since her cat joined you. But, like everything else in a real JRPG, this is only the start of your mission and there’s so much more to the conspiracy of it all. The Entities that seemed to have “taken” Sammy are more than you’d imagine. You’ll be joined by a cast of characters that range from peppy and quirky to dark and quirky, as you seek to uncover the mysteries and potential cataclysmic events that come with the looming year 2000.

Right out the gate, we need to address the poor port of YIIK: A Postmodern RPG to the Switch. Some years back, there was another Earthbound “inspired” title called Citizens of Earth, that was very quirky, very fun and incredibly lighthearted, while still being a serious RPG. Only problem is, every time you tried to walk into anywhere – a store, a building, a second dungeon screen – you were met with the loading screen from Hell. YIIK has similar issues, but they’re both better and worse in the same breath. On the one hand, several of the towns and dungeons are properly linked together so that there is minimal load time between these connected areas: you can travel to all connected spots without needing to load. However, changing outside of the specific draw area results in a very, very long load, and this includes things like stepping into shops, returning to the world map and, worst of all, simply entering into combat. The game seems very aware of these load issues and attempts to alleviate your wait time with helpful “Tips” that show up. These tips play back into the “quirky” nature of the game, in which they’re not connected to the game itself and instead, offer cooking, conversation, and general life advice. It was amusing, at first (and a pretty good tip on making spreadable garlic), but the more I saw the same Tips over and over in a very limited span of time, my patience wore paper thing. Please, make sure a title is optimized before releasing it on a console. “Good enough” will get your game to tank in this already crowded digital marketplace. 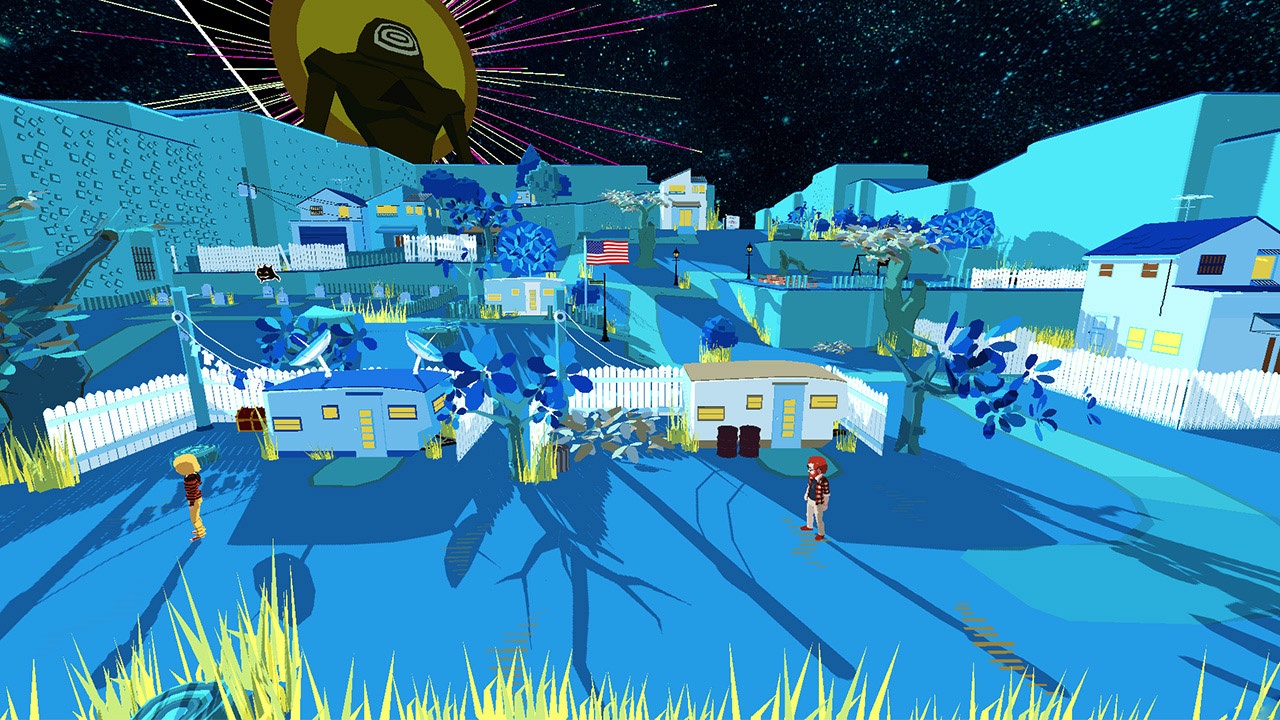 The combat, interestingly, is one of the game’s stronger suits. Taking nods from Undertale (and Toby Fox actually did make a track for YIIK’s soundtrack), the fight involves less traditional methods and more a series of mini games that usually boil down to hitting buttons at the right time. If you’re incredibly reactive, you should be able to mash buttons and deal maximum damage, dodge most incoming attacks, and rock out with your bad self throughout the course of the game. Alex’s record game gets better as time goes on, and you end up dealing modest damage with the right leveling up. I never totally got tired of how the combat played itself out (as a veteran of grinding through SNES RPGs, anything that allows me some control is welcome), but longer boss fights did test my patience. Also, for some reason, it really got my head twisted to think about percentages instead of just straight numbers with foods and tinctures that recovered skills and HP. Like…I guess that means things remain balanced throughout the game? However, it still made me have to do math every time I decided between a cheeseburger and a lemonade.

Speaking of leveling, it should be noted that the Mind Dungeon, a strange labyrinth that lets you control which stats are affected by each level and gives you more control of what you’d like to shape your character to be. It takes a bit more time than just the traditional “get EXP, get the level” motif, but it actually works out well to have some say in how your character progresses. I liked being able to duck into the Mind Dungeon wherever there was a save point (which are telephones) and cash out to get my character more hellbent on punching things (I’m a sucker for power strength leveling). However, not being able to get to the Mind Dungeon until more than an hour into the game was a little off-putting. I mean, I’m racking up all this EXP, and I’m still level one until Vella tells me how to level up. After that there’s balance, but it felt bizarre that I could play a game and fight so many enemies prior to actually being awarded anything. 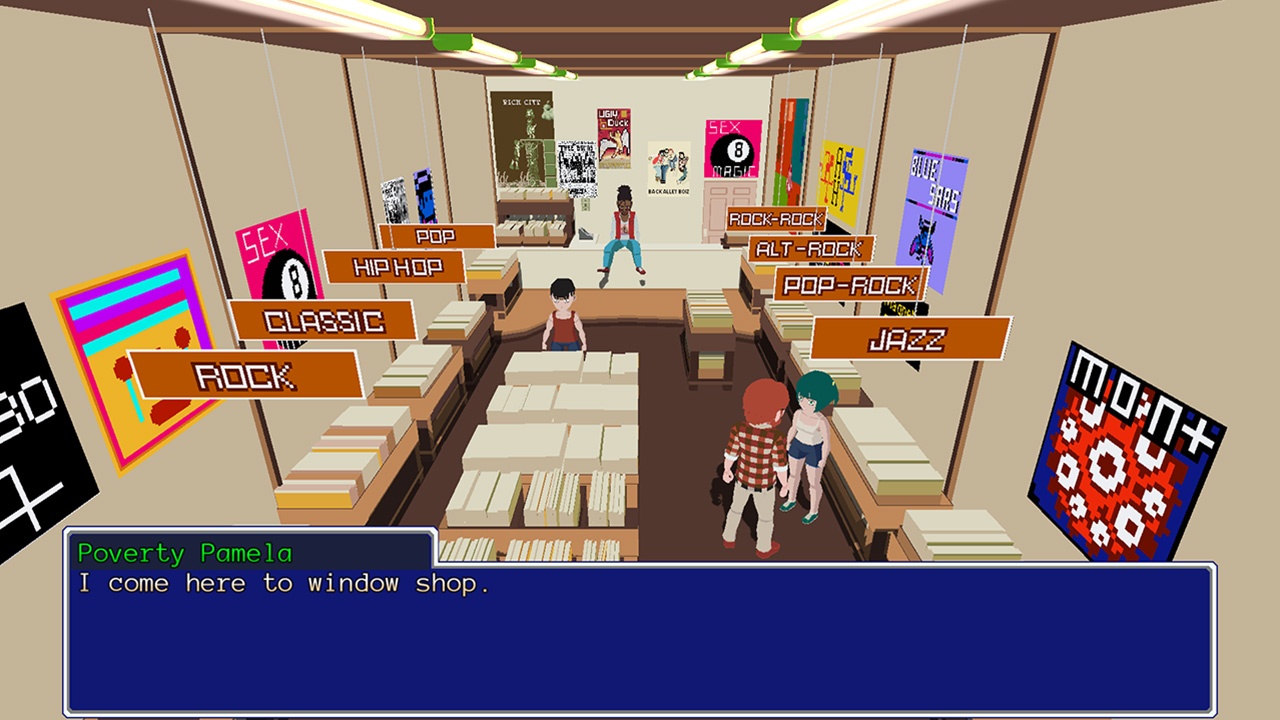 The story really isn’t bad, either. YIIK has some very cool elements regarding metaphysical science, occult ideology and the general way the Internet interpreted and prioritized tinge behavior in the 90s, during the Wild West days of Netscape and AOL Internet Service. You end up choking yourself with references to media, pop fashion and common thinking that was prevalent at the time, which..I’m still not sure about it. This game feels like it was made for someone from my generation, but I found it off-putting at times. I was born in the early 80s, which distinctly makes me a child of the 90s. As someone who had to do puberty and mental awakening during the era of challenge, grunge rock and Bill Clinton, I also have a very clear memory that not everything in that era was great. YIIK does a great job of making sure that we stay far away from the problems at that time and instead view things through a more “woke” lens of the 21st century, so the only problem comes from actually being in the 90s and knowing that homophobic slurs got tossed around way, WAY more casually than you’d expect. It’s a good backdrop to the story, and the Y2K thing (the world-ending computer glitch, not the game) was a very real threat and carried a bit of a mystic aura about it. The game does a good job of conveying that while also taking some liberties to make an enthralling and pretty thorough tale spun out of the fear.

What never, ever jived with me once, however, was Alex himself. Holy God in heaven, I don’t think I’ve ever had to deal with a more unlikable protagonist. And here’s the problem: with a lot of these indie RPGs that are so heavily influenced as a passion project, I start to think the developers and creators are extensions of the characters, which isn’t a good fit at all. Alex waxes poetic at every juncture that I couldn’t help but hate him, even as he grew and started to be less of a jagoff. The fact that there are sequences where he climbs ladders, gets into elevators and basically exists while the camera is close (but not tight) on him are me angry.  Alex’s abrasiveness didn’t do anything to make the other people seem better, but generally dragged down my opinion of them because they were in Alex’s presence. After a while, I came to the conclusion that I had been hoodwinked: this isn’t a JRPG at all. This is some kind of multidimensional, one-man play that wants to show you how damn smart it is in the face of SCREAMING evidence to the contrary. The fact that the Game Over screen is also accompanied by this stupid voice braying about death and loss made me hate it even further.

The music is decent. The animation and artwork is odd but fitting. The story is great. The combat is good. The optimization is terrible. But if I had to sum up YIIK in a single moment, it’s right after we lose Sammy at the Factory Hotel and Alex is leaving. Alex starts in on this deep monologue about feeling loss for this girl he only just met, but you can still move around during this. However, if you DARE to leave before Alex is done talking, the dialogue continues, and then the game is permanently frozen. You’re stuck in a black limbo, where you can hear yourself move and throw cats, but you can’t go back or forward. You gotta restart and then do the sequence over again, waiting patiently for this massive idiot to finish waxing poetic before you can go back home and check the Internet to get the game moving. That’s YIIK, in a nutshell. A game that holds you hostage with promises of retro identity (the opening shot felt so much like Earthbound and then never returned again), but demands that you deal with loverlong, thesaurus-humping inner monologues and drawn out conversations about nothing. If this is your bag, and you find no differentiation between hipsters and what people were probably like in Oregon in the 90s, then enjoy and rock it out. At the very least, though, wait until something gets patched to make the game load faster. As for me, this is straight up not my cup of tea, and I doubt I’ll be journeying back to 1999 anytime soon.

If you can’t align with the protagonist, you never really can get into this interesting but clunky JRPG.